11 things you no longer see in hospitals 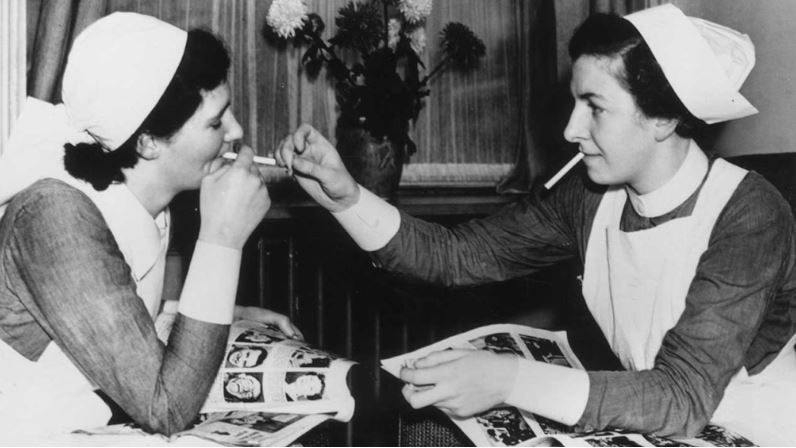 Endless paperwork, the bedside buzzer, and gowns that don’t close properly have long been used as fodder by stand-up comedians and TV sitcoms. But many, many things have changed. Let’s look past the obvious targets to see if you remember these one-time hospital staples. 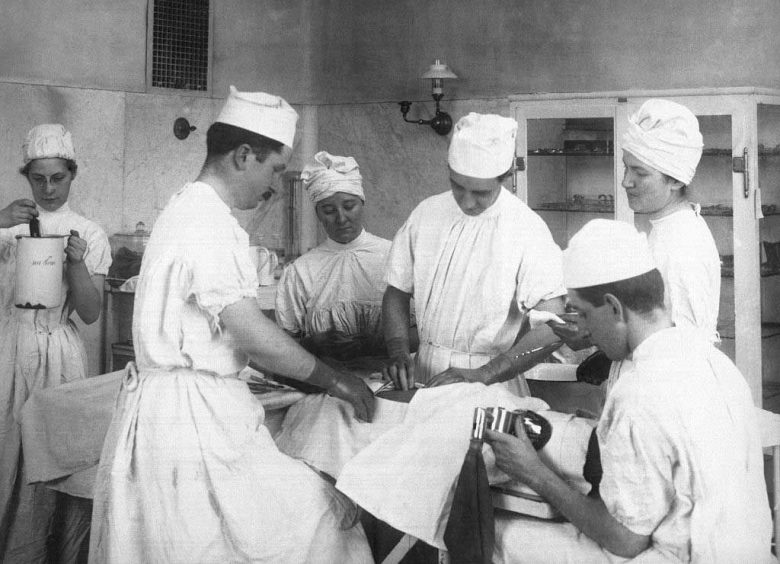 As seen in older films, surgeons traditionally wore bright white scrubs in the operating room. After all, white was the color of purity and cleanliness.

But one renegade French surgeon, René Leriche, started wearing blue scrubs in surgery way back in 1914. It reduced eye strain for doctors while working long hours during World War I. He also advocated that hospitals use a distinct color for clothes and sheets used in the operating room.

It took a long time for his concept to catch on, but eventually hospital administrators learned that the bright white lights in the operating room plus the red blood of the patients caused not only literal headaches for surgeons, but also optical illusions while quickly glancing from patient to the white uniform of an assistant.

Hospitals began using “surgical green” scrubs until the early 1970s, when the first primitive video cameras were placed above the room to record procedures for use in teaching medical students. White scrubs and white lights constantly disrupted the camera’s focus. Ceil blue turned out to be the best color for surgeons when it came to optimal surgical precision and their on-camera close-ups. 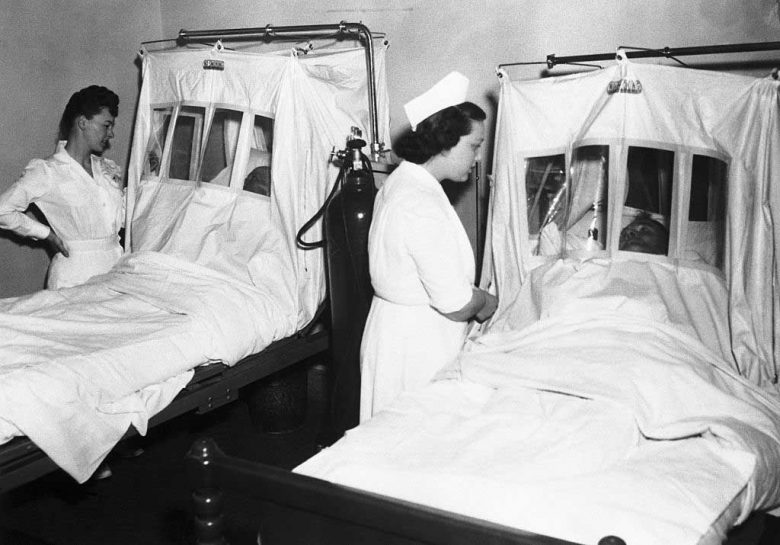 For many years when a patient needed a continuous oxygen feed, they were placed inside an oxygen tent (or, more properly, a “mist tent”) — a clear plastic “canopy” that covered them from their head to their midsection. Oxygen was pumped into the tent along with a cooling mist provided by ice that was packed into the back of the machinery.

Eventually it was determined that oxygen was delivered more efficiently and effectively via a nasal cannula. Mist tents were occasionally resurrected from the hospital storage room in the 1980s for the fussy child who kept pulling the cannula off of his face, but that canopy came with its own set of problems: hospitalized children are frequently frightened and are comforted by a parent lying in bed next to them. That plastic barrier made cuddling almost impossible.

So doctors learned to have patience with their tiniest patients and let them adjust to the nose tubes. 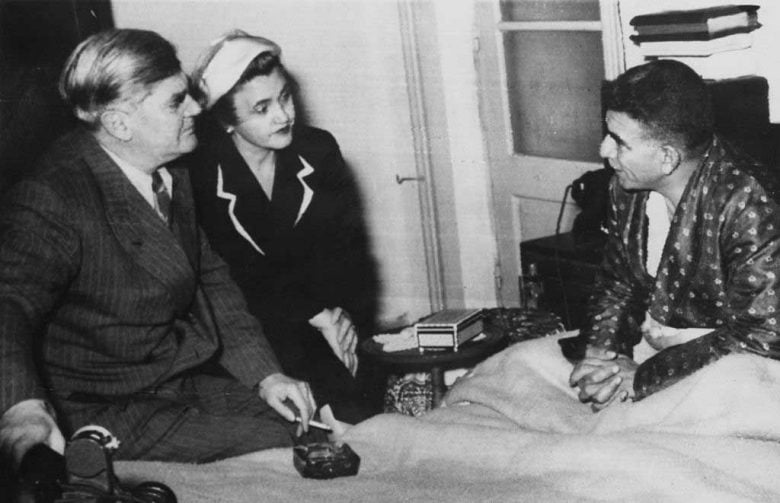 There was a time when an ashtray was a staple item of every hospital nightstand. Patients were not discouraged from smoking while incapacitated; indeed, candy stripers used to sell cigarettes to patients who were too ill to amble down to the commissary on their own.

Pedestal ashtrays dotted hospital corridors, and it was not uncommon for doctors to grab a puff or two while filling out a chart during their rounds. 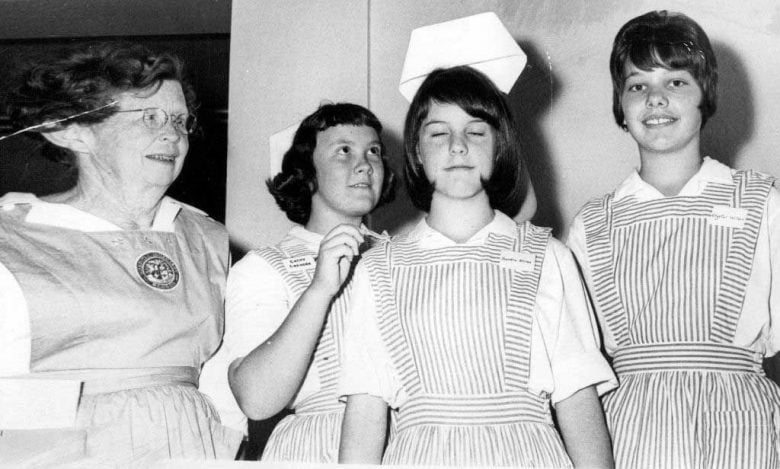 High school girls who had an interest in nursing once had the opportunity to volunteer at area hospitals as a Candy Striper. The program began in 1944 and continued until the late 1960s.

The name came from the pink-and-white pinstriped pinafores the girls wore while they delivered flowers to patients, refilled water pitchers, and changed babies’ diapers in the nursery. At one time they were even charged with carrying blood and other specimens from the operating room to the laboratory.

The pinafore has since been retired and HIPAA (Health Insurance Portability and Accountability Act) laws have redefined what they can and cannot do, but “candy stripers” live on in the guise of the Junior Volunteers program, which features a uniform consisting of a polo shirt and slacks. 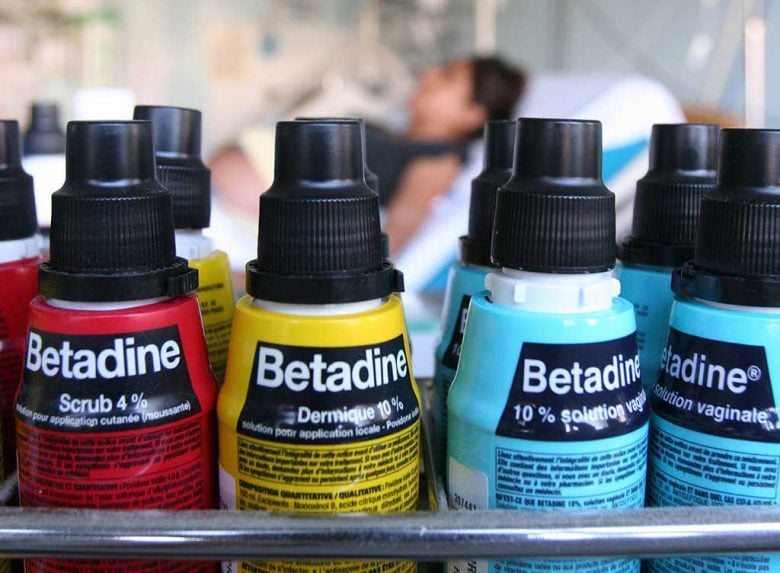 How many of us immediately had our insides automatically tighten and clench up when we walked through the doors of a hospital when we were young? That distinctive aroma, recognizable even if blindfolded, meant doctors and nurses and poking and prodding and — worst of all — shots!

One of the primary culprits for that old-school hospital smell was the topical antiseptic Povidone-iodine, better known as Betadine. Betadine is still used in as a surgical scrub, but due to the many possible side effects has fallen out of use as a disinfectant for minor wounds. Another contributor to that hospital odor was the strong disinfectants used to scrub the floors. In recent years, less aromatic detergents have been developed for hospital usage in acknowledgement of those patients who are sensitive to smells. 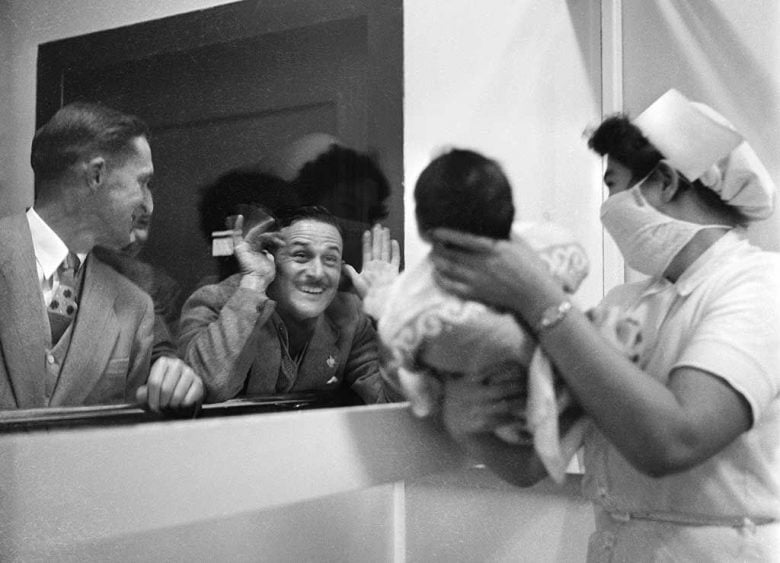 It wasn’t until the early 1970s that the father was included in the actual birth process and allowed to stay beside mom throughout labor and delivery. But even then, he still had the option to avoid the hard part and could instead stand vigil in that staple of every maternity ward at the time — the father’s waiting room.

Dads-to-be paced and smoked and read outdated copies of Field and Stream until a nurse summoned them to the viewing window in the nursery. Baby was already cleaned and wrapped up in an adorable bundle. 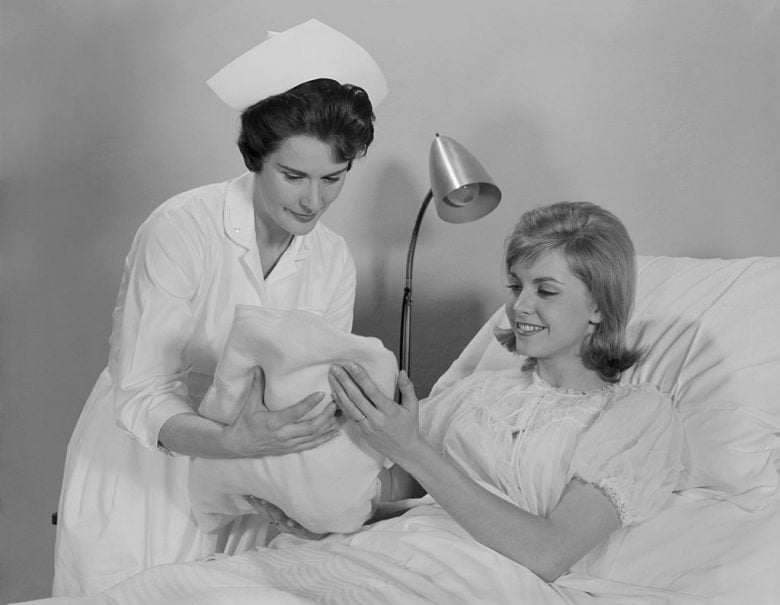 The average hospital stay for a new mother after giving birth was 3.9 days in 1970, according to the New York Times. That was in the case of a natural childbirth, no complications, no drugs administered, etc.

Prior to that, it wasn’t uncommon for new mothers to be hospitalized for anywhere from five to 10 days after giving birth, and only seeing their newborns during scheduled feeding times.

There are two schools of thought when it comes to the current trend of sending mom home 48 hours after checking in versus the previous long-stay regimen. True, those old-school moms had less “bonding time” with their babies, since they only held them a few times per day and the nurses did all the diaper changing. But those extended hospital stays also gave mom time to get some uninterrupted sleep before going home to the never-ending duties of caring for a newborn. 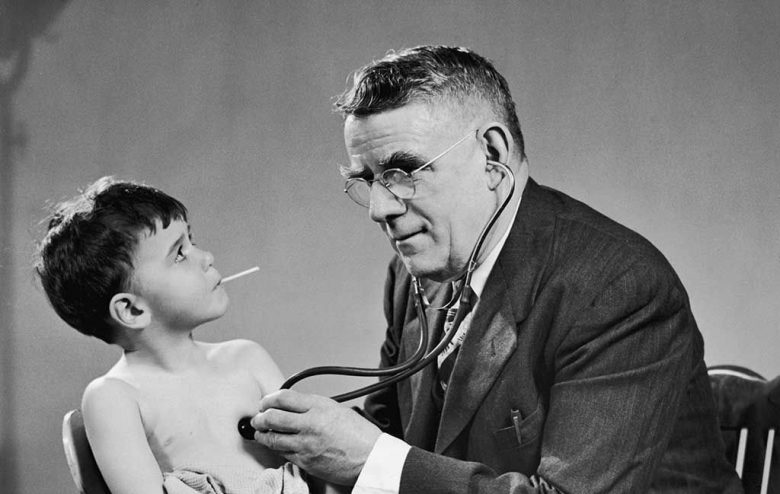 How many of us remember when the nurse repeatedly “shook down” the glass thermometer during an exam, and threatened to “stick it elsewhere” if we couldn’t keep it under our tongue for the
required minute?

Turns out mercury-filled thermometers were actually a health hazard when they dropped on the floor and shattered. Who knew that little silver globule could contaminate the surrounding air if not cleaned up properly? Not to mention if the patient happened to break the thermometer by chomping down on it. 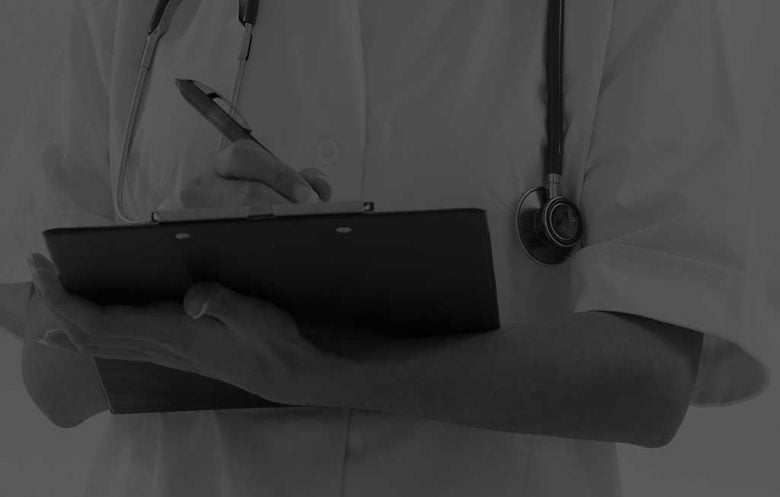 A patient’s most personal information used to be noted on a series of forms that were attached to a clipboard, traditionally hung at the foot of the bed. This was for the convenience of doctors and nurses as they made their rounds.

But truth be told, any bored stranger could browse Mrs. X’s medical history (not to mention other personal details, including home address, birthdate, and pre-existing conditions) while she slept. Thanks mainly to HIPAA laws, hospitals take more care to guard patients’ privacy. Most hospitals now utilize whiteboards above the patient’s bed for critical care information, but keep their personal details on an electronic tablet. 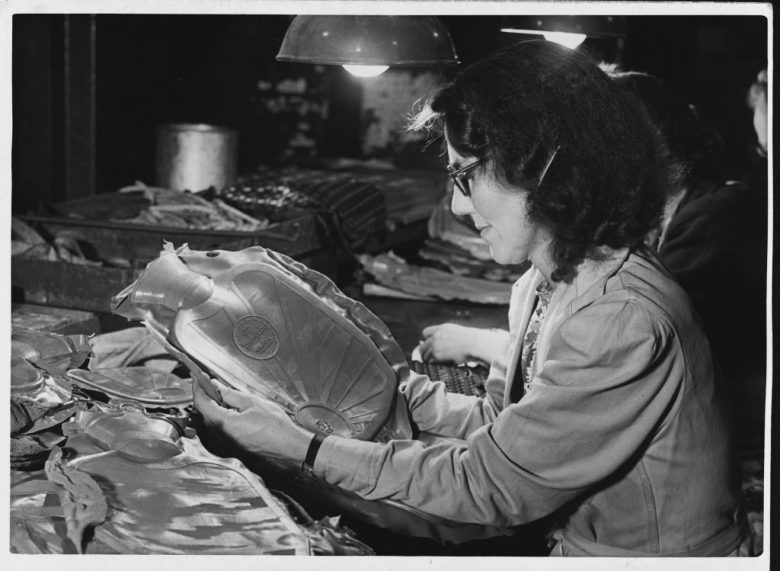 These Vulcanized rubber bladders filled with hot water were once the go-to device when a patient required localized heat on a particular bodily area. Today, microwave ovens and gel packs have taken the place of the old-fashioned hot water bottle. No waiting for water to boil, and flexible packs come in varying sizes and flexibility to soothe the most curvy and angular areas of pain. 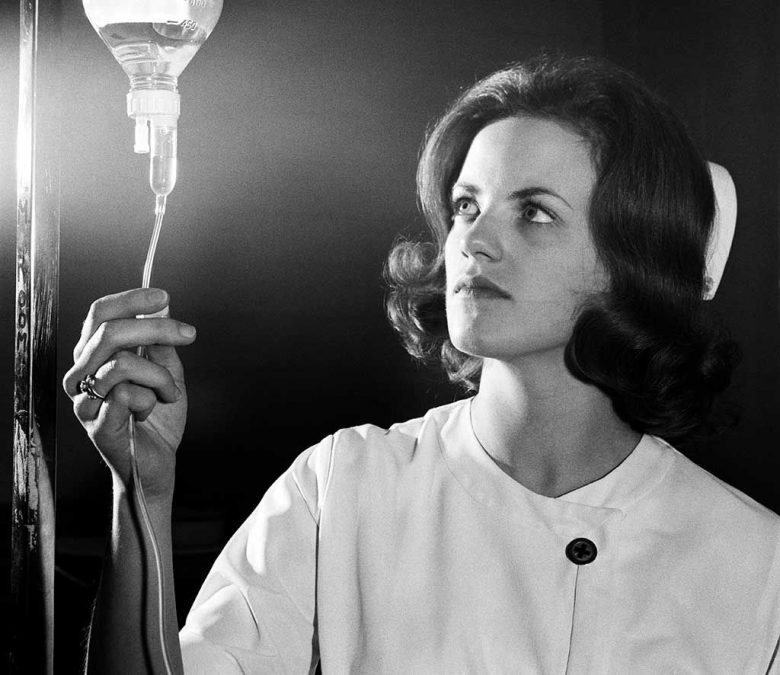 The white head-to-toe uniform for nurses (including cap, dress, stockings, and shoes) was, again, meant to be a sign of purity and cleanliness. That is all fine and dandy when said nurse first gets dressed in the morning. But after a few hours of tending to patients, their dresses got stained, shoes got scuffed, and caps fell off at the most inopportune times.

The seeds of change were sowed in the 1970s, when hospitals started cutting costs and one of those money-saving measures was no longer providing free laundering of uniforms. In addition, more males were entering the profession, and their white shirt-and-trouser uniform was deemed too similar to that of a doctor, causing confusion.

The colored scrubs that are now the norm. Studies have even shown that such attire has a calming effect on patients. 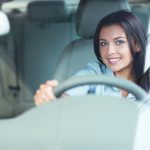 Previous Story:
These are the most popular cars in every state 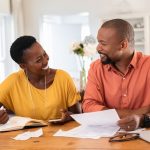 Next Story:
5 money moves to make if you don’t have regular cash flow