Bad financial advice from US presidents

We’re less than a month away from perhaps the most important presidential election in U.S. history, one that will not only decide the fate of the country for the next four years but likely the trajectory far after this term is done.

The President of the United States is the most important position in the world. With Congress and advisors’ help, the president is trusted to lead their country and move it and its people in a positive and prosperous direction.

It’s a lot to ask of one person, and despite being the Commander in Chief, the president is not always proficient or an expert in every subject. That is why there are so many advisory roles and other positions of power around the president who, typically anyway, help guide the president to make the best decisions possible given the situation.

But the president is still human, and humans make mistakes.

Even though the president has great influence over the country’s financial policies while in office, as well as a host of other factors related to your personal finances, not all presidents are financially sound themselves.

In fact, many of our presidents have been downright bad with money. It just goes to show that being the most powerful person in the most powerful nation does not always mean you’re good at managing your money.

Sit back and enjoy this bad financial advice from U.S. presidents and some equally bad stories from those you would not want to take advice from.

“I sincerely believe that banking establishments are more dangerous than standing armies.”

Thomas Jefferson was the third President of the United States and one of our Founding Fathers. He was also the primary author of the Declaration of Independence.

Despite having such a dramatic impact on our emerging nation, Jefferson wasn’t very good with money (more on that later), which may have something to do with why he was so against banks.

Jefferson wrote the above quote in a letter to John Taylor in 1816, highlighting his long-standing mistrust of government banks and opposition to public borrowing. Although Jefferson’s belief that banks can create long-term debt should be heeded, most Americans would not be able to get the funds needed to access many commodities without the ability to borrow money.

Specifically, homes, cars, businesses and other major purchases would not be possible without the existence of banks and other financial institutions.

“If a man has not made a million dollars by the time he is 40, he is not worth much.”

Herbert Hoover was President of the United States from 1929 to 1933, and was at the country’s helm as it entered the Great Depression.

While Hoover attempted to put forth a variety of policies to lift the economy, he was soundly defeated by Franklin D. Roosevelt in the 1932 election. He opposed directly involving the federal government in relief efforts and was a critic of FDR’s New Deal, which ultimately helped begin to pull America toward recovery.

Because he presided over the worst financial and economic crisis this country has ever faced, his words disparaging anyone who hadn’t made a million dollars by the time they were 40 comes off as tone-deaf and condescending. Like many who have experienced success, Hoover likely underestimated how much of that success came from favorable circumstances.

Despite his reputation of being out of touch, which this quote certainly supports, Hoover was also involved in humanitarian projects during World War I and activist programs pushing for higher wages and job-creating public projects as president.

“When the president does it, that means it’s not illegal.”

From 1969 to 1974, Richard Nixon is most remembered for the Watergate scandal that ultimately led to his resignation. However, that was not the only scandal he was involved in.

Roughly 20 years earlier, while serving as Dwight Eisenhower’s running mate, opponents accused Nixon of using political contributions from donors to live a lifestyle beyond his means. He responded with a 30-minute nationally televised address during which he discussed his family finances in detail. Whether or not Nixon misused political contributions is not clear, but his public confession saved his political career.

What is clear is that Nixon wasn’t above breaking the law to further his personal and political situation or paying others to carry out the dirty work.

Image Credit: Department of Defense. Department of the Army. Office of the Deputy Chief of Staff for Operations. U.S. Army Audiovisual Center / WikiMediaCommons.

“The simple answer is, let’s make the whole pie bigger, and everybody gets a bigger slice.”

Ronald Reagan was our nation’s first celebrity president, having had a successful acting career before turning to politics. He also put in place policies that have heavily shaped our personal finances and economics and continue to influence them to this day.

Reagan’s policies became known as Reaganomics, and his presidency saw huge tax cuts and less government regulation of business. He thought if the focus was on growing the economy through making it easier for businesses to invest and grow, everyone would benefit. This idea of “trickle-down economics” espoused that tax policies that benefited the wealthy would create a trickle-down effect and ultimately reach the poor.

With the wealth-gap wider than ever, it is probably safe to say that trickle-down economics mostly allows the pie owners to take bigger slices while the pie makers get the leftover crumbs.

Finally, we come to our current president and the second major celebrity to be elected to the land’s highest office.

While President Trump has claimed a net worth of $2.5 billion, which would make him the wealthiest president in history, recently leaked tax documents suggest that the president is also currently carrying quite a lot of debt and has paid very little in taxes the last decade.

If nothing else, President Trump’s tax situation exposes the loopholes and tax laws that businesses can exploit to avoid paying taxes despite making millions and even billions each year.

Whatever your political leanings, I think it’s safe to say that getting rich is easy when you inherit $413 million, but staying rich becomes much easier when you have the capital to take advantage of almost any financial opportunity that comes your way.

After all, it takes money to make money.

5 presidents you would not want to take money advice from

Now let us switch gears a bit and now talk about five presidents who were bad with money, and some despite being outstanding leaders.

Here are five presidents you would not want to take money advice from.

This notable Founding Father not only distrusted banks, but he was also terrible at managing his money.

Jefferson was born into an affluent family, owned a 5,000-acre plantation and had an estimated net worth of $236 million in today’s dollars. He also profited from enslaved labor.

But despite these advantages, Jefferson also had significant debt in his later years and was even unable to leave an inheritance to his daughter, who was forced to live off charity. He not only inherited debt from his father-in-law, but he also lent money freely (often not getting it back) and was impacted by a combination of bad crop years, bad loans and overspending.

He ultimately filed for bankruptcy and died with debts equaling $107,000, which would be over $1 million today.

William Henry Harrison is best known as the shortest-serving president in history, serving just 31 days before dying of an illness.

Harrison was the victim of a life of public service and misfortune. First, an Army man and then a politician, he depended on his family farm for income. While serving as the Ambassador to Colombia, his farm lost all its crops due to bad weather, and creditors came calling.

He was broke as he ran for president and died a month after winning the presidency virtually penniless. Luckily, Congress voted to give his widow a special $25,000 pension so she could live comfortably.

James Garfield is not one of the better-known presidents, but he was likely the poorest.

Garfield was born in a log cabin, and his family, already of little means, fell into poverty upon the death of his father when he was still a toddler.

Garfield worked many jobs to pay the bills and put himself through college, most notably as a janitor and a carpenter. Despite earning a law degree and passing the Ohio bar exam, Garfield spent his life in public service and never earned much money.

In fact, he was essentially penniless when he was assassinated in 1881.

Grant’s war exploits paved the way to a successful presidency, in which he led the nation out of the Civil War following the assassination of Abraham Lincoln.

Unfortunately, while he was a successful military strategist, he was not a sound financial one. Grant and his wife had a reputation for living beyond their means, traveling the world in luxury and spending money on fine dining. President Grant was also once ticketed for driving his horse-drawn carriage too fast through Washington, D.C.

But the downfall of President Grant came after investing in a financial firm with his son. He was defrauded by his son’s business partner and lost $100,000, which forced him into bankruptcy.

Grant died pretty much broke. But he gave his family some financial security after his Civil War memoirs were published posthumously by Mark Twain.

Finally, Harry Truman makes our list of presidents you wouldn’t want to take money advice from after a series of bad business deals forced him to move in with his mother-in-law.

Truman took over as president following FDR’s death and was at the nation’s helm at the end of World War II. However, before becoming involved in politics, Truman cycled through a series of businesses that largely failed, which meant that he was in serious debt by entering the White House.

While Truman managed to avoid filing for bankruptcy, he and his wife were forced to move in with his mother-in-law once he left office to help save money. He was also one of the first presidents to receive a pension, which amounted to $25,000 a year.

Just because someone is the leader of the free world does not mean they are knowledgeable or proficient in all areas. Especially when it comes to personal finance.

Knowledge is power, but power does not always equal money. 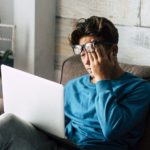 Previous Story:
Do you need help with student loan debt?
Next Story:
Experiencing racism can affect your sleep. Here’s why

About the Author / Fred Leamnson