Boxed meals like cheeseburger casserole from Hamburger Helper are not only quick and easy ways to make dinner on busy weeknights, they’re also comforting and may even bring about some childhood nostalgia.

But if the idea of serving a box dinner makes you feel a little uneasy — they are typically loaded with preservatives, after all — we recently found a great recipe online that allows you to make Hamburger Helper-style cheeseburger casserole from scratch!

This recipe for cheeseburger casserole from The Kitchn

calls for ground beef, onions, beef broth, elbow macaroni, spices and a few other easy-to-find ingredients. Once it’s all cooked, you’ll add cheddar cheese on top and let it melt into the rest of the ingredients. The recipe takes just five minutes of prep work and is ready in 30 minutes, offering up four to six servings.

Just like the boxed version, The Kitchn’s cheeseburger casserole is all made in one pot, so you won’t be dirtying tons of dishes. If you want to serve it in the center of the table; however, you’ll likely want to transfer it from the pot you cooked it into a casserole dish, but you’ll still only be using two dishes to make the entire meal.

Of course, you can also make substitutions to the recipe if there are any ingredients you don’t like, including using a different kind of cheese. You can also make it healthier by swapping out the ground beef for ground turkey, which has fewer calories and fat.

Vegetarians can even tweak the recipe a bit by swapping the meat for plant-based ground. You can also use beans instead of meat or a meat substitute, vegan cheese, vegan Worcestershire sauce and no-beef broth, and then the entire recipe will be vegan.

To make sure you’re getting your recommended amount of vegetables for the day, you could also add some steamed veggies to the mixture, like broccoli or cauliflower, or serve the dish with a side of vegetables or a salad. 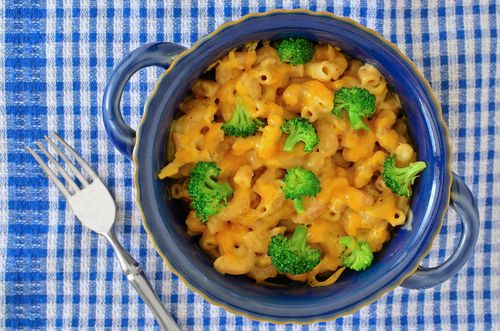 Some savvy internet chefs have also come with some other homemade Hamburger Helper-style recipes, like this one from The Novice Chef that adds flour to thicken it and pasta shells for a bit of a different texture if you’re burnt out on elbow macaroni.

Along with the flour and pasta, you’ll need ground beef (or any of the subs we mentioned above), beef broth, tomato sauce, heavy cream, cheese and a handful of seasonings, including smoked paprika, which has a richer, heavier flavor than normal paprika.

The Novice Chef notes that the dish is quite rich, and if you need more liquid for your pasta, you can use water or extra beef broth. If you are substituting a different pasta for the shells, just try to use a similar size so the liquid ratio is accurate.

If you want to make it even a bit healthier, this recipe from Half-Baked Harvest is quite similar, but it calls for milk instead of heavy cream and also adds grated zucchini to ensure you’re getting some veggies with your comfort dish.

Also made using just one pot, you’ll first cook the meat with some olive oil and onion, then stir in seasonings. You’ll then add uncooked pasta, which you will bring to a boil in broth and milk. Cheese is next, followed by the toppings of your choice, like fresh parsley.

If Hamburger Helper-style recipes are simply not the ones for you, there are plenty of other one-pot recipes that are just as easy and comforting but with a different flavor profile, like this creamy chicken and bacon pasta we’ve written about before.

The recipe calls for penne pasta, chicken breasts, bacon, spinach, tomatoes, parmesan cheese and half and half, plus seasonings like paprika and garlic. It all comes together with about 20 minutes of prep time and 20 minutes of cooking time.

Another one-pot chicken parmesan dish, this recipe from The Chunky Chef calls for chicken breasts, pasta, your favorite marinara sauce and both mozzarella and parmesan cheese.

You’ll simply cook the chicken with seasonings in a pot or skillet, then remove the chicken and cook up some onions. You’ll then add marinara sauce and water, adding the chicken back and some pasta, cooking it until the pasta is done. Once it’s all cooked, you’ll stir in cheese and add more if you want, then garnish with more seasonings.

If you’re up for a dish with a bit of a Mexican flair, this one-pot enchilada pasta from Peas and Crayons is not only quick, but also quite healthy, as it is vegetarian and uses chickpea pasta.

It takes just 10 minutes of prep time and 30 minutes of cooking time, so it can be quick on a weeknight, or just a comforting dish for a weekend meal. It calls for some pretty basic ingredients you may already have on hand, like enchilada sauce, black beans, crushed tomatoes and vegetable broth.

It can also be customized for everyone in the family by using separate toppings, like sour cream, cilantro, green onions, tomato, jalapeño and cheese.

This article
originally appeared on Simplemost.com and was
syndicated by MediaFeed.org.

27 of the most delicious air fryer recipes on the web