Do you know where your Thanksgiving meal comes from?

We’ve entered November, and with the holiday season just around the corner millions of Americans have started planning their Thanksgiving dinners. Traditional foods are a big part of the celebration, and everyone is looking forward to their roast turkey and favorite Thanksgiving sides and dessert.

But where does all this food come from? We turned to the USDA website to find the top producing states for some of Thanksgiving’s most popular ingredients. USDA provides state-level data for 2020 for all Thanksgiving ingredients analyzed in our report. 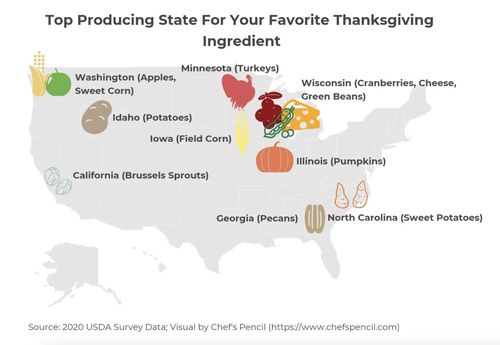 The National Turkey Federation has estimated that roughly 46 million turkeys are eaten every Thanksgiving, with about half eaten at Christmas and Easter. Thanksgiving without turkey is unthinkable for most, so where does this cherished bird come from?

Minnesota is the leading producer of turkey, and has long been the turkey capital of the US, though the number is down by 2 million from 2017. Compared to the same 2017, Arkansas has overtaken North Carolina for second place, while Indiana and Missouri rank 4th and 5th nationally.

Potatoes are served up in a variety of ways on the Thanksgiving dinner table, but mashed potato is definitely the most popular potato dish and arguably America’s favorite Thanksgiving side.

So if you love potatoes (and who doesn’t), say thanks to Idaho farmers who produce over 134 million cwt (hundredweight) of potatoes every year. Washington state comes in second and together with Iowa, the two states are responsible for roughly 55% of the nation’s potato crop.

Potatoes prefer cool weather, so most are produced in northern states.

The distant cousin of the potato, sweet potatoes are a popular Thanksgiving side, though not nearly as popular as regular potatoes.

Sweet potatoes prefer hot weather and are grown is southern states. North Carolina leads in sweet potato production and is responsible for more than half the entire US crop. California ranks second while Mississippi comes in third. Outside of these three, no other state produces a significant amount of sweet potatoes.

Wisconsin is by far the leading producer of green beans, with over 5.5 million cwt ever year. Wisconsin produces more green beans, also called snap beans, than the next three states combined (New York, Oregon, and Michigan).

Cranberry sauce is one of the most popular sauces served at Thanksgiving. Americans consume 80 million pounds of cranberries during Thanksgiving, including 5,062,500 gallons of jellied cranberry — enough to fill nearly eight Olympic-sized swimming pools, according to Insider.

For such a large amount you might be surprised to learn that just four states produce the bulk of all the cranberries consumed. Wisconsin is responsible for close to 60% of the nation’s harvest and over half of the world’s production.

The cranberry is a native wetland plant that likes cool weather, which is why it’s harvested in Wisconsin, New England, New Jersey, and Oregon. Outside the US, cranberries are also grown in Canada, where cranberry sauce is a very popular Thanksgiving side too.

Let’s talk desserts, in particular pumpkin pie – according to Google Trends, this is the most popular Thanksgiving dessert. So where are they grown?

Illinois is the pumpkin capital of the US, with a production that outweighs the next six states combined.

Pumpkin pie might be America’s favorite Thanksgiving dessert, but apple pie rules in the Northeast, according to a poll conducted by GE.

Somewhat counterintuitively, the center of apple production in the US is not the Northeast. In fact, it is the Pacific Northwest. Washington states accounts for close to 70% of the apples grown in the US. New York comes in second, while Michigan and Pennsylvania rank 3rd and 4th.

Pecan pie is America’s second favorite pie according to YouGov, so where do Americans source the nuts for this popular dessert?

Pecans grow best in warm, humid climates, so are found primarily in the South. It’s not surprising then that pecan pie has its largest fan base in the region.

Georgia is the pecan capital of the US, accounting for close to 50% of all local pecan production. New Mexico is also a very strong pecan production base, while Texas and Arizona come in at 3rd and 4th.

Creamed corn, anyone? This tasty dish is one of the most popular Thanksgiving side dishes according to Zippia.

To many people’s surprise, sweet corn is not primarily produced in the Corn Belt. The top producing states for this delicious vegetable are Washington, followed by Minnesota, Wisconsin, and California.

Cornmeal, the key ingredient for cornbread and other tasty corn-based dishes is made from field corn. This type of corn is grown primarily in the Corn Belt, a region in the Midwest that’s been the center of corn production in the US since 1850.

Finally, cheese is a key ingredient in so many popular Thanksgiving dishes, from mac n cheese to hashbrown casserole, that we had to include it.

Wisconsin tops the table (again!), with California coming in second and Idaho third. Wisconsin produces so much cheese that if it were a country, it would rank fourth in the world for cheese production.

This article originally appeared on Chef’s Pencil and was syndicated by MediaFeed.org.

Previous Story:
These cheesy sloppy Joes are your perfect game-day sandwich
Next Story:
Making Tax Digital — Helping you comply with the UK regulations

About the Author / Caroline Williams