You can save a lot of money by switching to a battery electric vehicle (BEV): up to $14,500 over 15 years in lower fuel costs, according to the Department of Energy. As a bonus, you can feel better about your carbon footprint. No wonder more than 300,000 Americans purchased BEVs or plug-in hybrids (PHEVs) in 2020. We predict that, at the current rate, more than 500,000 will have bought them by the end of 2021.

Congress has reallocated $150 billion since 2008 to cover the Highway Trust Fund’s shortfalls. At the state level, America is also facing enormous transportation revenue deficits. They could have big implications for what you’ll soon pay whenever you go to the pump (or to the charging station).

We crunched 20 years of data on state-by-state BEV, PHEV, and classic hybrid electric vehicle (HEV) adoption, along with state gas tax increases, number of drivers (and average miles driven) per state, and even fuel-efficiency forecasts.

Here’s what our projections found.

Check out InMyArea.com’s other research on local taxes and cost of living:

States Stalling Out With Gas Taxes

That’s because infrastructure has become remarkably expensive. “Spending on highways buys less now than at any time since the early 1990s,” reports the Congressional Budget Office. Plus, many states never tied their gas taxes to inflation.

It’s why so many states have desperately raised gas taxes in recent years. You can see this increase in the following map. 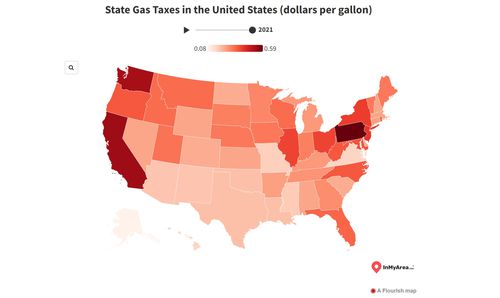 But higher gas taxes are insufficient in the long run, because BEVs are replacing traditional vehicles at increasing rates — and even traditional vehicles are getting more fuel-efficient each year. According to trends from the Bureau of Transportation Statistics, forecast miles per gallon for all fleet vehicles on the road will rise from 24.4 mpg to 25.7 mpg over the next decade.

Between rising EV sales, the EV fee gap, and improving fuel efficiency, a perfect storm is forming. When we put all of our data together, here is the picture that emerged. 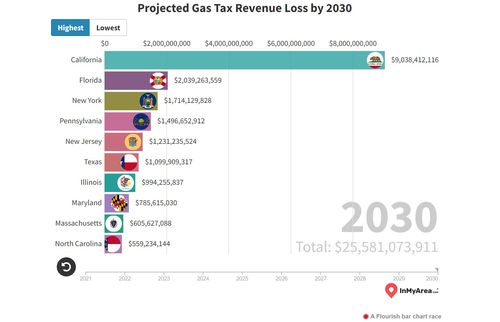 Here are the 15 states that stand to lose the most revenue by 2025 and 2030, according to our calculations: 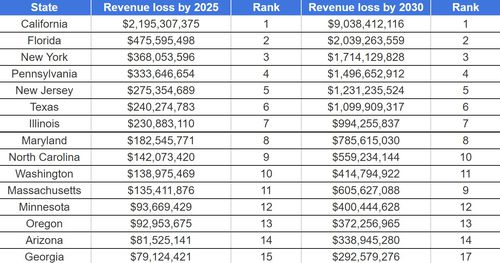 More than half of states have already seen their gas tax revenues decline over the past few years. Between 2018 and 2020, Michigan’s fell by 18.56 percent, Utah’s by 13.45 percent, Rhode Island’s by 10.57 percent, and Washington’s by 8.68 percent. The situation is dire everywhere.

The Rise of Hybrid and Electric Vehicles

Only 17 Americans bought hybrid cars in 1999, but it was the dawn of a revolution. When the Toyota Prius entered the U.S. market in 2000, no other street-legal vehicle got close to 50 mpg. Still, sales weren’t phenomenal: Americans purchased fewer than 10,000 hybrids that year.

This trend changed quickly. Although the Prius was infamous for slow acceleration on the road, it had massive acceleration off dealers’ lots. 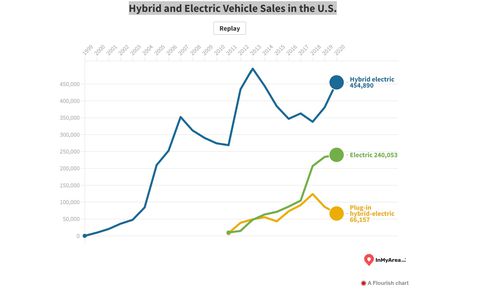 To fully understand these numbers, we need to talk about California.

In 2007, Californians purchased more than a quarter of hybrids in the U.S. By 2013, the Prius was California’s most popular car line. This trend is partly attributable to the Golden State’s environmental politics and to its significant gas tax, the highest in the country at 53 cents per gallon.

When BEVs hit the scene in the 2010s, California drove the market again:

Currently, EVs only cost about $175 million in lost federal gas tax revenues per year, but that number could explode to $4.5 billion in a single decade. That’s not even including the cumulative $25 billion in losses we’ve projected at the state level. Here are lawmakers’ three most commonly proposed solutions:

More than half of states (including many of those losing the most gas tax revenue) now add special fees to register a BEV, a PHEV, or even an HEV. We’ve ranked them from highest to lowest. 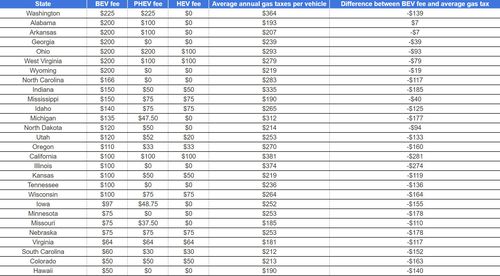 We discovered that you’ll currently pay less for BEV fees than for gas taxes in many states (with the exception of Alabama). If these states don’t raise their fees or adopt a new tax system, deficits will grow with each BEV sold.

Outside of California, we found there already seems to be an inverse relationship between BEV adoption and state gasoline expenditures. North Dakota and Wyoming have the fewest and second-fewest BEVs in America respectively, while they spend the most and second most on gasoline per capita. Meanwhile, some of the states with the most BEVs (New York, Illinois, Florida, Georgia) spend the least on gasoline per capita.

Are higher registration fees for alternative fuel vehicles the best way to address budget shortfalls? Are they fair? Let’s explore the pros and cons.

From 2018 to 2020, the number of charging stations across the U.S. grew from approximately 70,000 to 100,000. Because of this growth in public charging stations, many states are attempting to levy a point-of-sale excise tax like gas stations.

Pennsylvania already taxes BEV fuel on a gallon-equivalent basis, and Iowa will implement a per-kWh excise tax in 2023 along with a hydrogen fuel tax. Minnesota has explored the idea as well. Here are some pros and cons of the alternate fuel tax.

Gas taxes are based on how much fuel you burn. The VMT would tax you based on how far you go. It’s a huge change from the current system, but lawmakers from both parties — at the federal and state levels — believe it’s the best and fairest way to future-proof transportation budgets.

A dozen states are now studying the VMT. Oregon’s pilot program, called OReGO, is the furthest along, with thousands of drivers currently participating. Oregon charges drivers in the program $0.018 per mile. The average Oregon driver travels 8,900 miles per year, which adds up to $160 annually in VMT taxes. When we factor in Oregon’s $110 BEV fee, the total ($270) is equivalent to the amount Oregonians pay per capita in gas tax. The math checks out perfectly.

VMT may seem like a good middle ground between registration fees, alternate fuel taxes, and gas taxes, but it’s not without its drawbacks. We put together the following pros and cons of a state VMT so you can see the whole picture.

For many years, gas taxes allowed state governments to pay for most or all transportation needs. However, this condition is no longer true, as gas tax is failing to cover infrastructure costs in 46 states. With BEVs skyrocketing in popularity, this situation will grow far more dire, costing states up to $25 billion by the end of the decade, according to our extensive research and forward projections.

A new funding mechanism has become necessary. The proposed mileage tax is the most likely long-term solution, but it will make alternative fuel vehicles more expensive to drive at a moment of environmental crisis.

Ultimately, each state will need to decide for itself how to balance its transportation budget in the years ahead, but the price of doing nothing would be the highest of all.

In order to generate our state gas tax revenue loss projections, we made the following calculations using these authoritative sources of data:

Technology changes every day and with it, so does the mind of consumers.

InMyArea Research is composed of industry analysts and data scientists. We conduct studies on internet usage, TV and streaming services viewership and how consumers make decisions when it comes to their home services. We also study internet connectivity, the digital divide and how it impacts students, low-income consumers, rural consumers and veterans.

This article originally appeared on InMyArea.com and was syndicated by MediaFeed.org.

These states will actually pay you to buy a Tesla

Previous Story:
The best ready-to-drink tequila cocktails you can buy
Next Story:
31 things that can go wrong when you build a new home

About the Author / Andrew Cole