How you could make thousands when your auto lease expires

According to a recent report by iSeeCars.com, the average three-year-old vehicle is worth 31.5 percent more than it was at the beginning of its lease term.

For lessees whose leases are about to expire, that means there’s a good chance their car’s residual value is significantly higher than the amount needed to buy it. There’s potentially some money to be made for those who turn around and sell these vehicles.

Here are the 15 vehicles with the largest difference in value over their predicted price according to iSeeCars.com’s data.

iSeeCars.com analyzed “almost 10 million new and used car sales to determine which model year 2018 cars could likely be purchased at the end of their lease term and sold for the highest profit. It estimated three-year depreciation values for new cars in 2018 and then applied these values their prices to obtain predicted three-year residual values. It then compared the predicted residual values to average used car prices of model year 2018 cars sold in May – July 2021. The models were ranked by the percentage difference between the predicted residual values and average used prices, and these differences were also aggregated at the bodystyle level.” 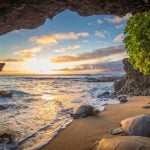 Next Story:
These popular US destinations are also the most expensive