Man takes his grandma on adventures of a lifetime

Brad Ryan and his grandma Joy Ryan weren’t always close. Though they had a tight bond through his childhood, Brad’s parents’ divorce had been difficult and led to a rift between the young man and his father’s mother. But when he saw his grandmother at his sister’s wedding for the first time in many years, he noticed how frail she seemed. He also had some personal challenges that caused him to reevaluate his life.

“For all those reasons, I needed to start from scratch and rebuild what was lost during that period of estrangement,” Brad told Fox Weather. “I set out to try to save her from this small-town experience, what I considered a really gloom and doom way to spend your golden years sitting on the porch in the same town you’ve lived in 80-plus years.”

When Grandma Joy told Brad she’d never seen a mountain before, he asked if he could take her to Great Smoky Mountains National Park, and she said yes. After a successful trip, they set out to visit every national park in America — and now they’ve been to all but one.

Brad recently shared photos and details of their first trip together, which took place in 2015, when Grandma Joy was 85 years old. She’s now 92 and still traveling.

“This Labor Day weekend marks the seven year anniversary of our first road trip to the Great Smoky Mountains National Park. I was still a vet student at The Ohio State University College of Veterinary Medicine. Grandma Joy had not yet seen (or climbed) her first mountain. And a weekend getaway that was intended to be a one and done experience, planted a seed that would take us to every corner of America over the next seven years,” Brad wrote on the Facebook page, Grandma Joy’s Road Trip. 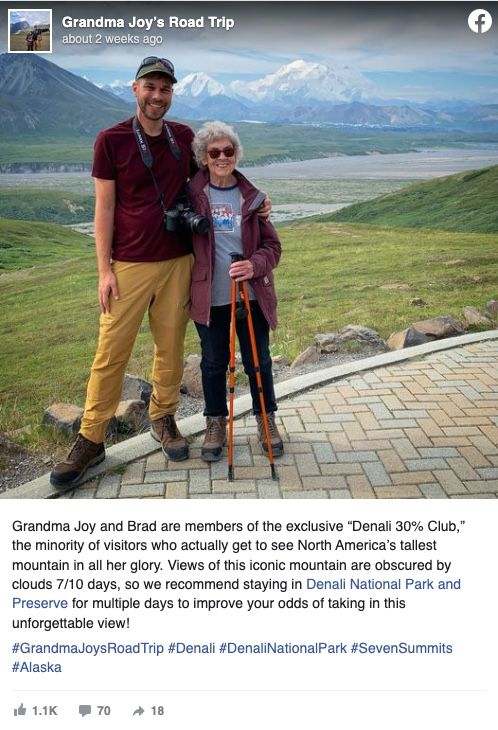 Since 2015, the duo has traveled to 62 of the 63 U.S. National Parks, although the pandemic slowed them down a bit. Together, they have been white water rafting, watched bears catching salmon, rolled down a sand dune, slept in tents and watched the sunrise from the seashore. And Grandma Joy has become stronger and healthier.

“I never think about how old I am, I just do it,” Joy told The Washington Post.

While in Alaska, they also visited Wrangell-St. Elias National Park and apparently took to the skies above in a bush plane:

In July, Brad posted that they now had passports in hand that would allow them to reach their final national park:

“All of it has been magical,” Brad, a 41-year-old veterinarian based in Washington, D.C., told the Post. “I’ve been able to see so much of the country and meet so many people with my grandma by my side.”

The last park on Brad and Joy’s list is the National Park of American Samoa, more than 6,700 miles from their hometown of Duncan Falls, Ohio.

“It’s been a grand adventure, it really has,” Joy told “Good Morning America.” “It’s really been a beautiful, beautiful time. And I wouldn’t trade it for anything.” 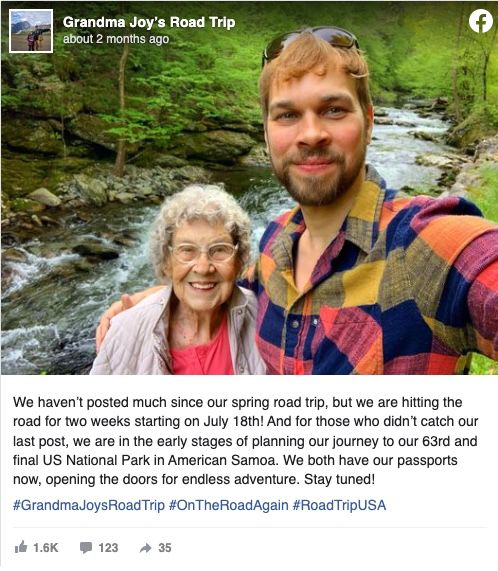 This article originally appeared on Simplemost.com and was syndicated by MediaFeed.org.

8 adventure trips for every type of traveler — even you

Previous Story:
The trick for perfectly crisp, juicy apples, every time
Next Story:
How to set up your small business for success