The best time of year to buy a car

When you’re shopping for your best deal on a car, timing matters. While December is the least popular month for car buying, according to LendingTree research, it’s the best time to take advantage of buyer incentives.

According to data from more than 2 million LendingTree users, the lowest APRs are available in December. And according to data gathered by Edmunds between 2015 and 2020, December car buyers get the biggest MSRP discounts.

Despite these incentives, December is the least popular month for car buying, with auto loan inquiries 23% below the monthly average. LendingTree auto expert Jenn Jones said foul weather is a big reason for that slowdown, discouraging buyers from visiting lots and taking test drives.

Best time to buy a car

For the lowest APR on an auto loan, December is the best time to buy. Buying in December could mean knocking 1 to 2 percentage points off your APR and saving money on the cost of repayment. For a $25,000 loan with a five-year repayment at an APR of 8%, just a 1 percentage-point reduction would save you $743 in overall interest payments.

But even if you can’t wait for December, understanding seasonal trends could still help you time your purchase to get a better deal.

While APRs change from month to month, it’s important to note that they don’t typically fluctuate a ton over the course of a calendar year, unless outside forces impact the auto market.

For example, our data shows that the high and low average APR only varied by 2.35 percentage points in 2020. However, average APRs dropped by a full percentage point between February and March 2020, coinciding with the beginning of the coronavirus pandemic.

Here are some APR trends to note from February 2019 through January 2021:

APRs drop to their lowest at the end of the year for a few specific reasons.

In December, auto sellers are not only working to meet end-of month sales goals, but they have end-of-the-year goals, too. Jones said this sales push results in special financing deals and marketing campaigns like “December to Remember” and “Honda Holidays,” meant to entice more buyers.

When it comes to timing an auto purchase for your best deal, APR isn’t the only consideration. The MSRP discount on a vehicle can also fluctuate from month to month.

According to separate data collected by Edmunds, which looked at average monthly MSRP discounts between 2015 and 2020, December once again emerged as the best month to buy. 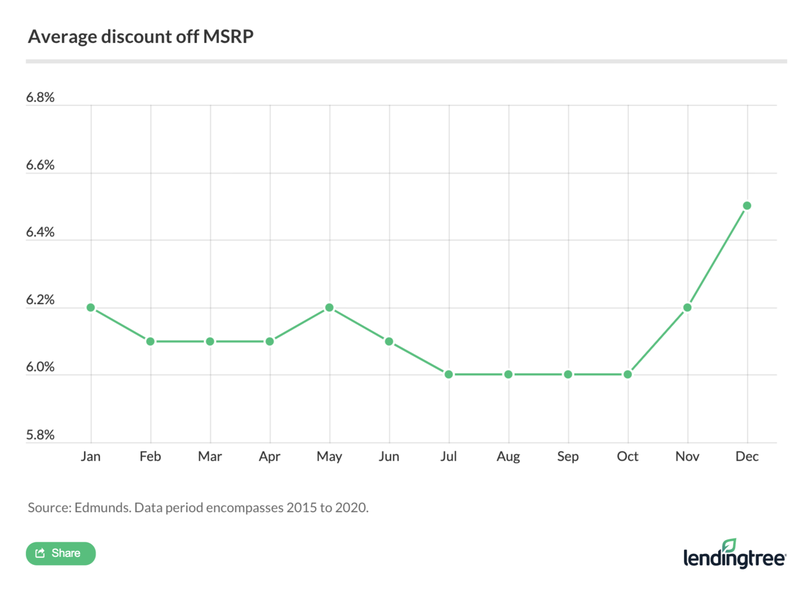 With discounts averaging 6.5%, December is the best month to get MSRP discounts. Since new models are typically introduced at the end of the calendar year and are generally more popular with buyers, the dealer is likely to offer a bigger MSRP discount as an incentive to buy the outgoing model of a vehicle.

Buyers can expect the second-best deals in January, May and November, with each month averaging MSRP discounts of 6.2%. The least optimal time of year for MSRP incentives is July through October.

Most popular time to buy a car

While December may be the best time for buyer incentives, it’s not a popular time to purchase a car. According to LendingTree metrics, car purchases nationwide hit their peak much earlier in the year in March, followed by May.

The least-popular month to buy a vehicle is in fact December — the slowest month for car buying in 34 U.S. states. Trends vary slightly from one state to the next, with weather appearing to play a big role in the most popular time to buy. 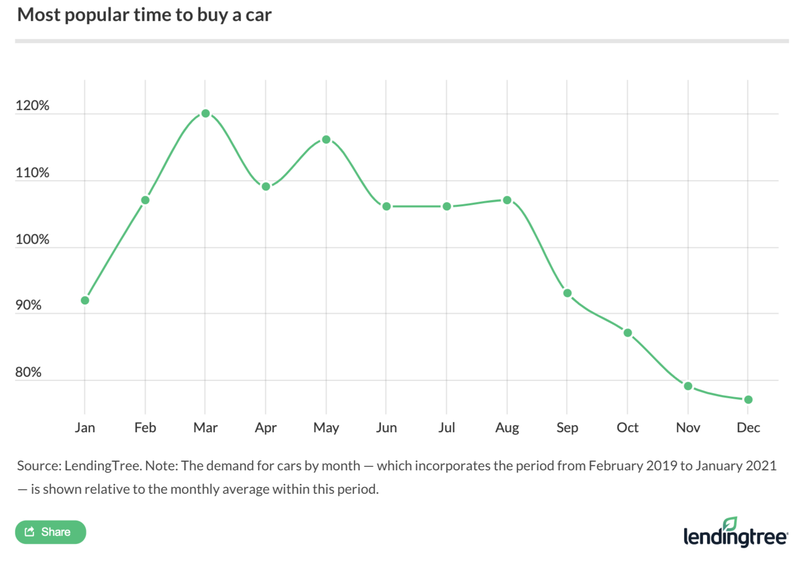 Colder weather can deter buyers from car shopping, test-driving vehicles and planning travel with a new vehicle. Spring, which begins in March, brings warmer temperatures and a surge in buying.

Additionally, tax refunds can begin arriving in February and March, giving buyers the cash they need for a down payment.

Some states follow slightly different trends. In Vermont, the state that sees the most seasonal fluctuations in car buying, there’s a 63 percentage-point shift between its busiest month (March) and slowest month (December). Wisconsin (60 percentage points) and North Dakota (58 percentage points) were second and third.

At the other end of the spectrum are states like Florida, where winter can be dry, and Alaska, where snow is possible year-round. Florida has the second-lowest seasonality in car buying, with only a 35 percentage-point fluctuation between March and November. Alaska, the state with the least seasonality in car buying, sees only a 33 percentage-point change between May and December.

How to find the best car incentives

Even if you’re not shopping at the end of the year, you can still take advantage of car-buying incentives. Consider some of these methods for finding your best deals:

We estimated the average number of monthly shoppers from February 2019 to January 2021 and found the states with the most seasonality by comparing each month’s stats to the monthly average. We ranked the states from highest to lowest based on this seasonality metric. We also included data on the average APR for shoppers who received an auto loan, based on the same period of February 2019 to January 2021.

Previous Story:
This is the only state that hasn’t had a tornado in the last decade
Next Story:
The rest of the week on Wall Street

About the Author / Sarah Brady