These glasses are made to help people with motion sickness

Nothing ruins a road trip like a bout of motion sickness.

If you suffer from motion sickness, like me, you’ve probably had to adjust just how much “fun” you have when heading out. Whether that means trying to sleep through a long drive so you don’t notice how you feel or avoiding eating so you don’t have anything to, uh, bring back up if you get nauseous, getting to your destination is definitely the worst part of a trip.

Motion sickness, if you’re not aware, is caused by your brain’s reaction to conflicting information sent by your eyes, ears and body. When in a moving vehicle, for example, your muscles remain still, but your eyes see things passing out of the window. This leads to your brain getting confused about whether you’re stopped or in motion.

Fixing the disconnect between your brain and the rest of your body is the idea behind a pair of motion sickness glasses on Amazon that reviewers say “look silly,” but either help or totally cure their motion sickness. The Hion Anti-Motion Sickness Smart Glasses do not have lenses, instead opting for four circular tubes (two for your around your eyes and one on each side of your head) filled with liquid. The level of the liquid in the circle changes based on the motion of the vehicle, which creates an artificial horizon in your vision that “re-synchronizes” your eyes with the rest of your balance system.

These glasses normally cost $70 but have recently been reduced to $24, a 67% savings. While they definitely look quite goofy, the manufacturer says you don’t have to wear them the entire time you’re doing whichever activity causes your sickness.

If you feel dizzy or nauseous, simply look at something that isn’t moving (i.e., a book or your phone), then wear the glasses for 10-14 minutes. Once you feel relief, you can take the glasses off because your balance has been restored and the effects will continue. You will need to wear them for 10-14 minutes each time you begin a new movement. 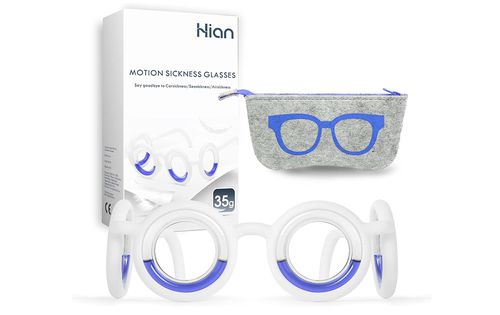 With more than 1,000 5-star reviews, Amazon customers say the glasses “absolutely work” and have helped some people read or play video games while in a vehicle.

One reviewer who has suffered motion sickness his whole life and can’t even normally look at a timepiece in the car called them “deranged Minion glasses” but tells customers to swallow their pride and forget about looking silly.

“I hate taking meds — everything, non-drowsy or not, makes me tired — and I’ve tried all the other remedies too (ginger, peppermint, bracelets, patches…),” they wrote. “But these dumb glasses work. I put them on when I was already feeling a little sick and immediately felt the nausea, headache, and light-headedness go away. I rode on an Amtrak for four hours and was on my phone looking at pictures, doing my Wordle, scrolling on Insta and never once felt sick. I even wore them over my glasses. The only time I had any issue was when we were passing by another train going in the opposite direction.”

“I was also able to ride with my mom who gets me car sick every time,” wrote Erin D. She went on to say they were tight on the nose but didn’t hurt. “They are sort of small for an adult, but they do more good than harm.

For my test, I wore them with and without sunglasses and made sure to test them with the smallest print item I could find on my bookshelf — a stained copy of “Jane Eyre” from 1960, which I started to read during a 45-minute drive.

I was already feeling a bit dizzy while looking at the book after just a few minutes in the car. I noticed I wasn’t actually reading because I was finding it hard to focus.

I then wore the glasses for the allotted time and within about 5 minutes, I was able to begin reading. Ten more minutes in, I removed the glasses and continued reading — with no dizziness! I then put the book away for 10 minutes and went back to it to see if the effects were still lingering. While I felt a quick second of dizziness when I first began reading again, it actually faded even without my putting the glasses back on.

Next up was the backseat, which has always been my least favorite place in a car. I was immediately nauseous on the 45-minute drive back home, even without looking at a book or my phone. Looking out the window and seeing trees pass by is not fun, so I usually just look straight ahead. I again began looking at my book for a few minutes, then put the glasses on.

This time I did 10 minutes, taking them off and looking out the window once the time had passed. While I felt a hint of dizziness once I took them off, it faded quickly and I was indeed able to look out the window without feeling nauseous.

While they definitely worked for me, there are a few things to note. Because my motion sickness is not severe, I cannot attest to how well they will help if you have a habit of tossing your cookies every time you’re in the car. I would guess that wearing them the entire trip, instead of just 10-14 minutes, may work better in severe cases.

I also did not use them on a plane, train or boat, so I can only say how they are in a car. I would also assume they would not pair well with rollercoasters, as they’ll likely fly off your head, so if rollercoasters are too much for you, you’ll likely still need to avoid them or try some other methods of helping your nausea.

I also found them to be a bit uncomfortable on my nose. Although they’re made of plastic rubber-type material and have a nose guard, it did leave a bit of a mark there when I took them off. Because you only have to wear them for around 10 minutes, their comfort level isn’t a huge problem, but I’d take a bit of nose discomfort over dizziness and nausea any day.

While some reviewers say they wore them over their glasses and they fit just fine, they slid around a bit more on me than they did without sunglasses. If you have smaller prescription glasses, they may fit, but if you can stand to have your glasses off for a few minutes while first wearing them, that might be preferable.

If you’ve already tried the glasses and they didn’t work for you or you simply need something different, Amazon has a few other gadgets also intended to help with motion sickness.

These LYJEE Motion Sickness Bands are only $8 for five pairs and work by putting pressure on the nei-guan acupuncture points on each wrist via a plastic stud that works to restore balance. The bands are drug-free and have no side effects. Simply slip them on your wrist before an activity that would typically make you nauseous. 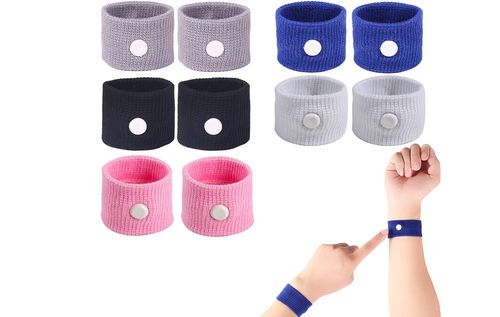 These MQ Motion Sickness Patches work similarly to the bands, as you simply stick them behind your ear or under your belly button 10 minutes before travel. The patches, which have more than 7,000 5-star reviews, are $9.50 for a pack of 20. 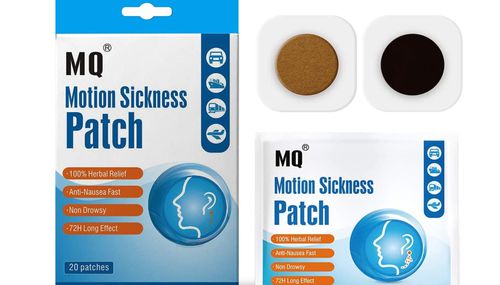 Of course, you can also stick with an old favorite, Dramamine pills, which have been used to treat nausea and motion sickness since 1947.

Previous Story:
The story behind that iconic Farrah Fawcett poster
Next Story:
Take a look inside Bob Hope’s $29M estate