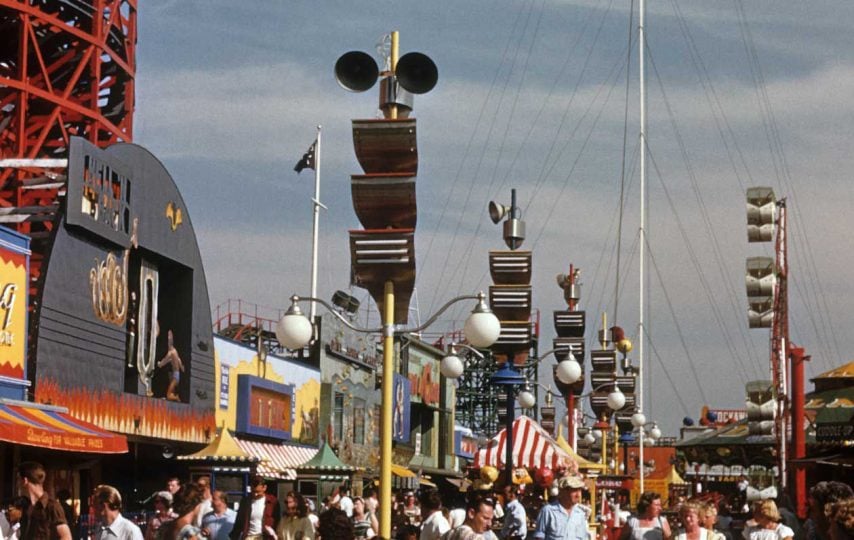 For generations, people from all over the world have flocked to Coney Island, New York, for summer fun. From the boardwalk to the annual hot dog eating contest at Nathan’s, the Mermaid Parade, and the rides and arcade at Luna Park, there’s always plenty to do and see.

Except for this year.

No arcade, no rides 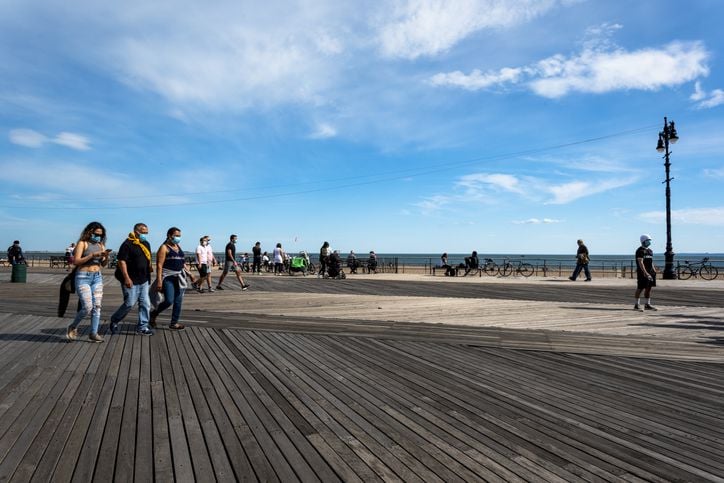 While the boardwalk and beach are open, with light crowds mostly practicing social distancing, Luna Park announced that it would remain closed indefinitely due to COVID-19.

As an ode to Coney Island memories over the years, here’s a virtual trip through the rides and attractions that make Coney Island the beloved summer destination it is.

See more: 75 weird facts you may not believe are true.

1884: The first roller coaster in America arrives in Coney Island 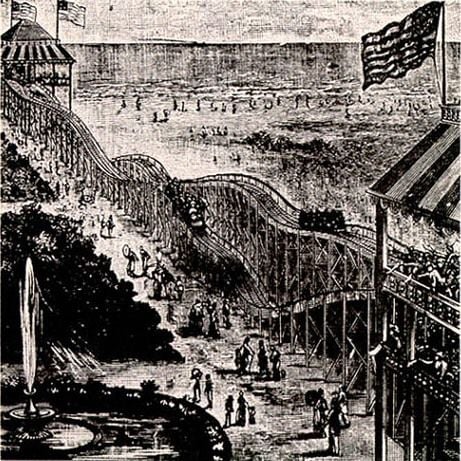 Dubbed the “Gravity Switchback Railway,” this historical coaster was designed by LaMarcus Adna Thompson in 1881 and was brought to life three years later. It is said that Thompson based the design off of a coal-mining train turned thrill ride called the Mauch Chunk Switchback Railway in 1827.

At a hefty fee of five cents to ride, people had to climb a tower to sit in the broad bench-like cars the ride provided. The coaster then sped down a track at 6 miles per hour to another tower, which then connected to a return track — hence the name “Switchback Railway.” 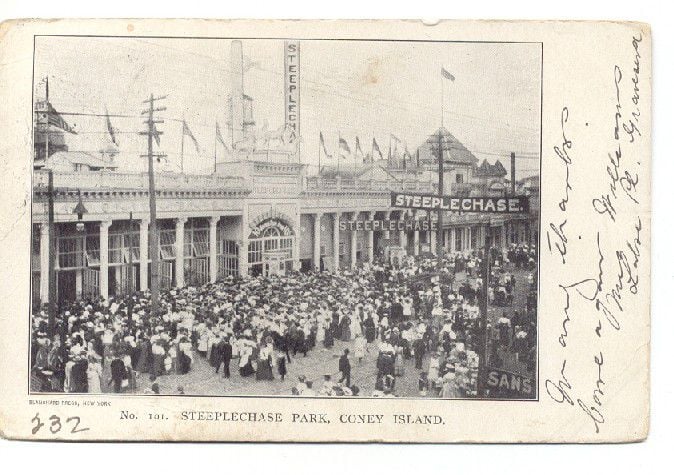 The main attraction of Steeplechase Park was, of course, the horse-based Steeplechase ride. Riders would begin at a horse-race-like starting line and sit in horse-shaped cars that would release simultaneously to simulate competition. 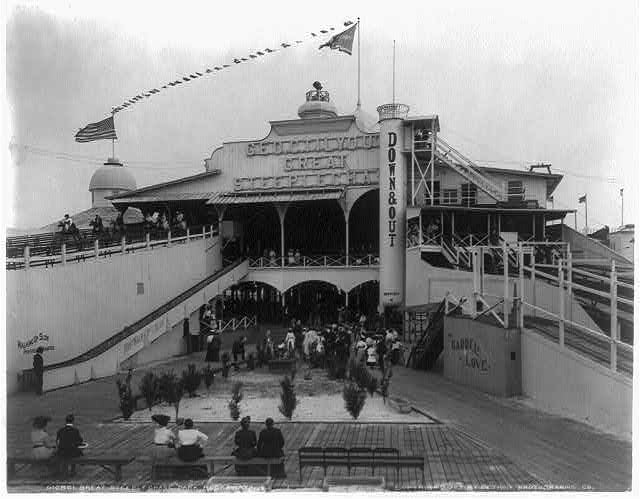 The park was destroyed in a fire in 1907 but was quickly rebuilt. It still holds the record as the longest-running Coney Island park at 67 years of operation, eventually shutting down due to a rise in crime, competition from other vacation spots, and residential development. 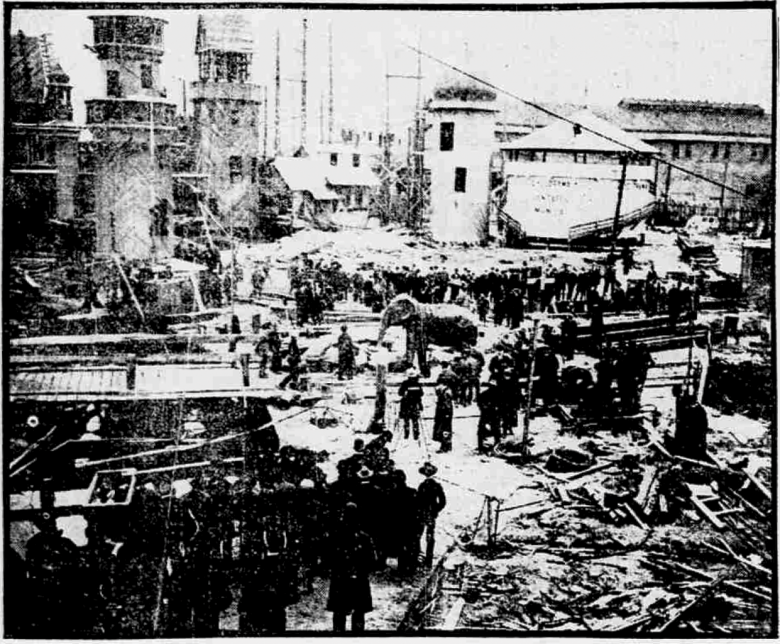 The early 20th-century version of the modern-day park was located on Surf Avenue between 8th Street, 12th Street, and Neptune Avenue. Founded by Frederic Thompson and Elmer “Skip” Dundy, the name was based on the wildly successful ride “A Trip to the Moon,” rode via an “airship.” 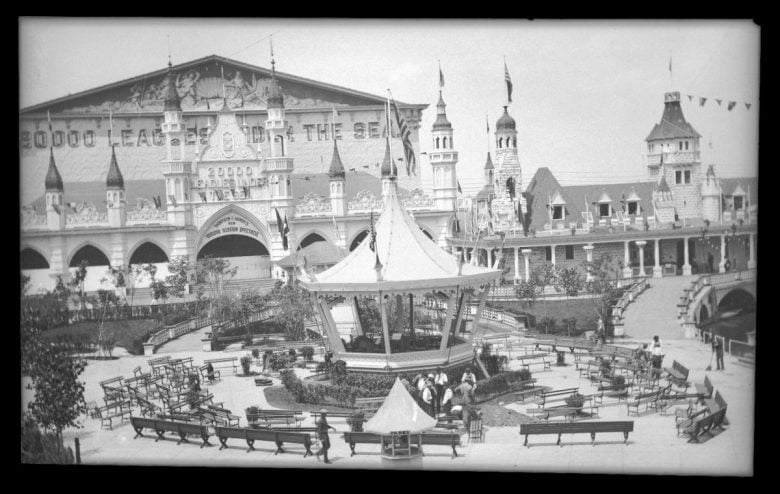 Unfortunately, the first Luna Park also was destroyed in a fire in 1944 and never reopened due to a dispute over insurance money. The location of the original Luna Park now holds an apartment complex called the Luna Park Houses. 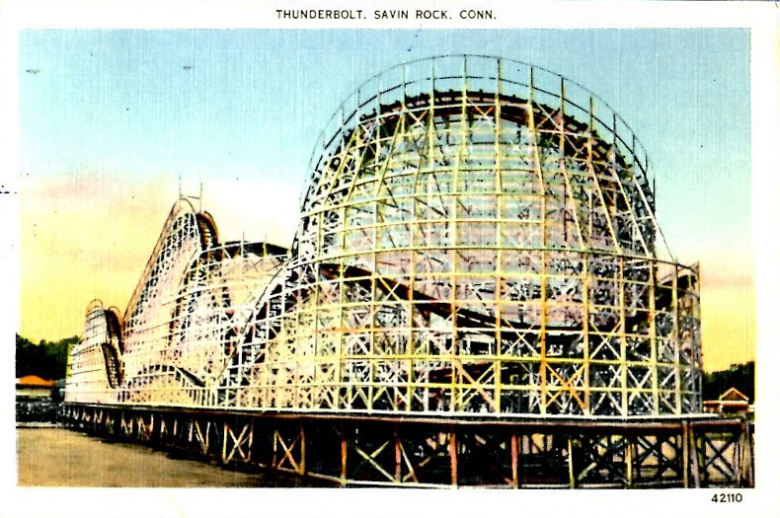 While the original Luna Park was still in operation, the wooden Thunderbolt roller coaster, designed by John Miller, was built. It operated until 1982.

The ruins of the original coaster were featured in a Spike Lee film titled “He Got Game” in 1998 in its broken-down state, as cover-art for the band Red House Painter’s 1993 album and in the 2000 film “Requiem for a Dream.”

It was finally demolished in 2000. 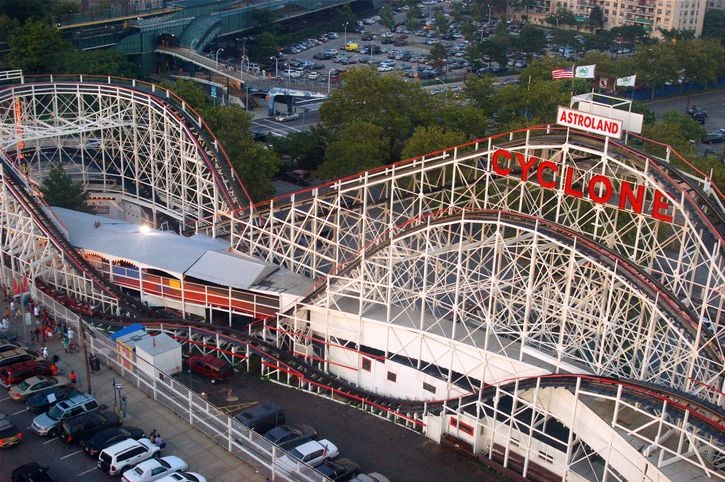 After Thunderbolt received widespread success, entrepreneur brothers Jack and Irving Rosenthal invested $100,000 to build their own roller coaster. With the help of Vernon Keenan, a roller coaster designer, The Cyclone was built, and riders could experience it for only 25 cents a ride. 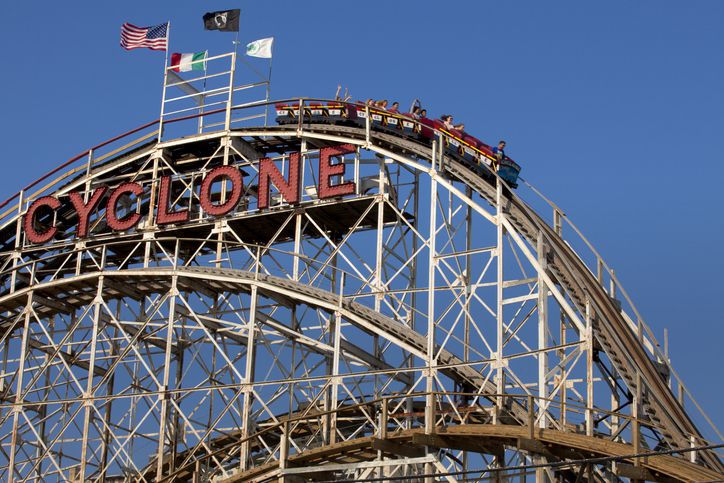 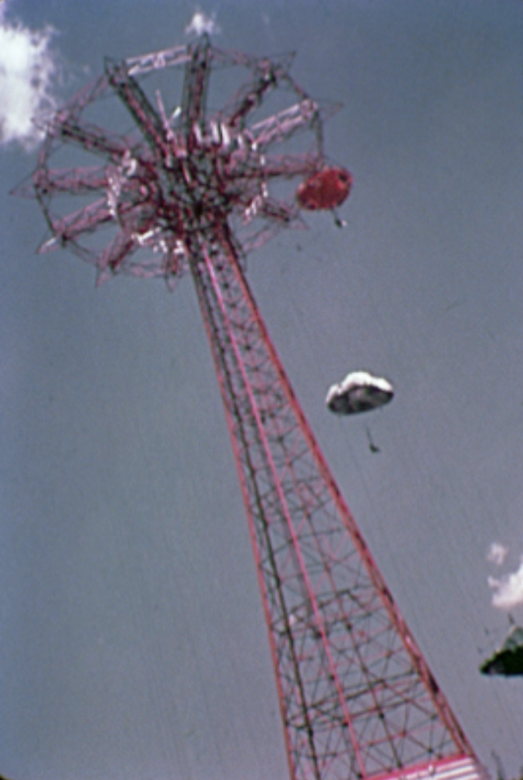 Originally named “The Jump” and described as “flying in a free fall,” the ride attracted over half a million visitors annually until it closed in 1964.

Today, the Parachute Jump still stands and is an official New York City designated landmark and is also listed on the National Register of Historic Places.

2013: The Parachute Jump gets a new look 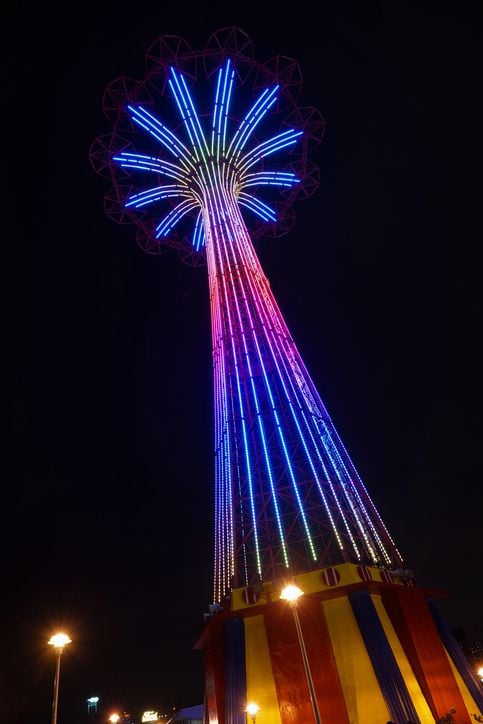 The Parachute Jump was restored as part of a $2 million restoration project of Luna Park in 2013. It is adorned with more than 8,000 LED lights. 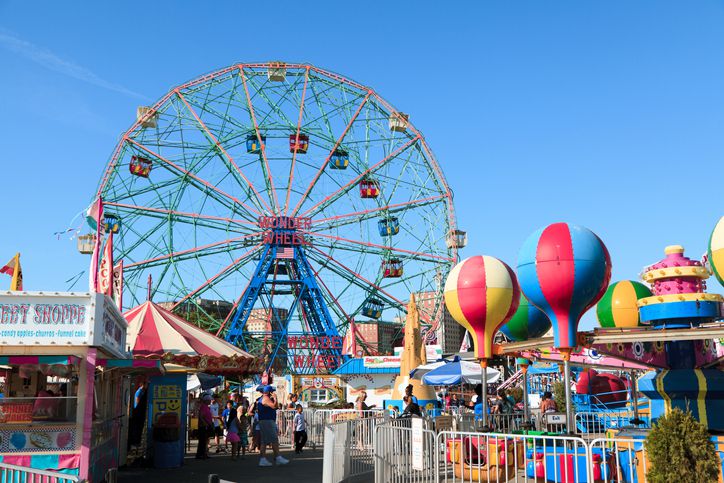 The amusement park was renamed and rejuvenated in May of 2010, adding more than 200 jobs to the local community. Rebuilt by Central Amusement International, the park now has 19 attractions for amusement park goers to enjoy. 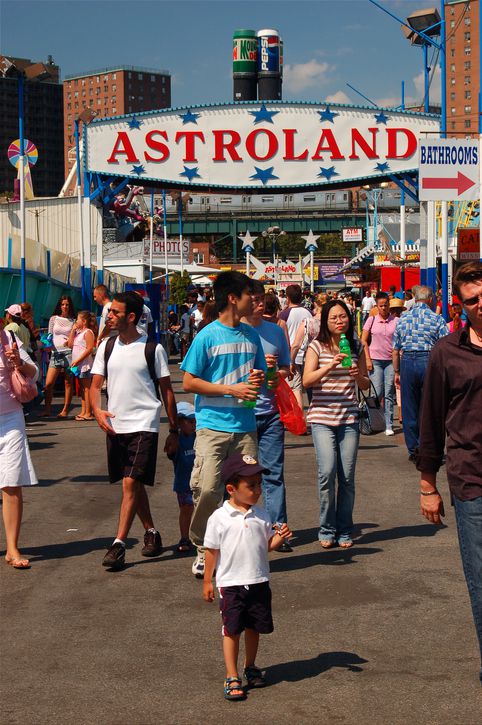 Luna Park now operates in the same space as Astroland, the previous amusement park in operation from 1962 until 2008. 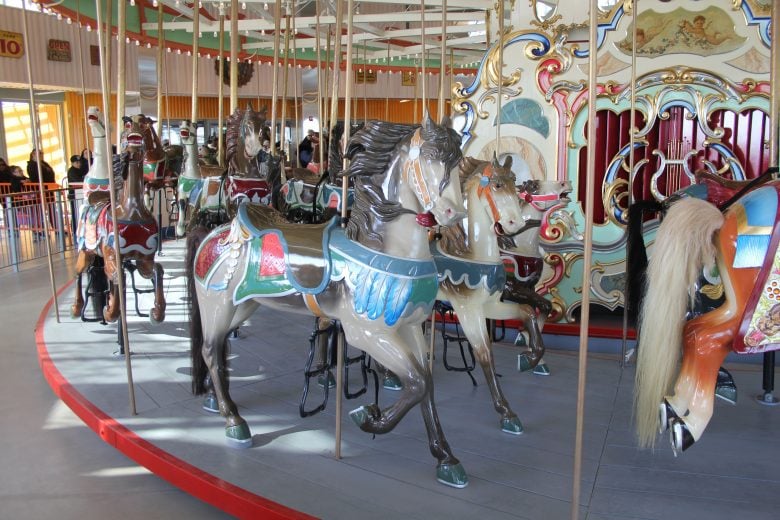 Coney Island’s “last traditional carousel” from the early 20th century has more than 50 hand-carved wooden horses and two chariots. It also was spruced up as part of the restoration project.

2014: The new Thunderbolt roller coaster comes out to play 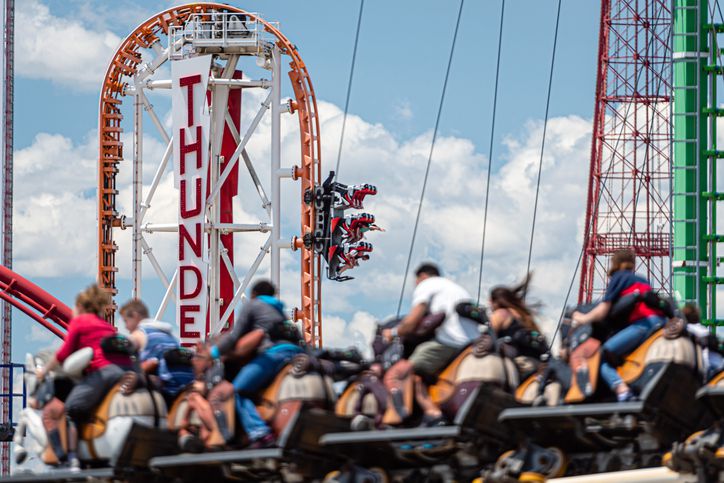 A hunk of steel and a chunk of change ($10 million, to be exact) later, the new iteration of the Thunderbolt roller coaster opened in the summer of 2014.

Check out more articles from MediaFeed: 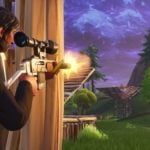 Previous Story:
55 of the most popular products made in America 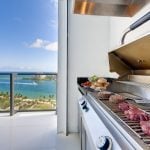 Next Story:
7 of the world’s most expensive barbecue grills