What are Americans grilling this July 4?

The Fourth of July is the most popular U.S. holiday for grilling, according to a 2020 survey of American grill owners. Some 68 percent of respondents like to throw barbecue parties on that day. 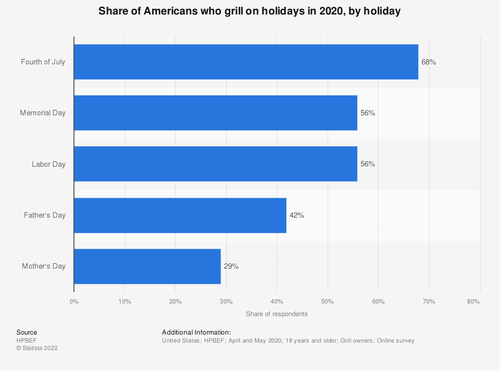 Here are the share of Americans who grill on holidays in 2020, by holiday:

Traditionally, meats such as hot dogs, burgers, and steaks are the center piece of any American barbecue party. Among Americans who have recently attended a barbecue, 88 percent chose meat or steak as their preferred food of choice at a barbecue. About 50 percent said they prefer grilled vegetables. In the two weeks leading up to Independence Day 2016 in the United States, beef sales reached nearly 804 million U.S. dollars.

Grills in the United States

Grills are a fixture in many American households and backyards. They can very rudimentary and small or huge and luxurious with dozens of special features. As of 2017, most of the grills owned by Americans were gas grills, with electric grills being the least common type. Pellet grills and smokers, which are less traditional than gas or charcoal grills, saw high levels of sales growth in the United States in 2016.

Smokin’ hot hacks for the best summer grilling season ever

Previous Story:
This summer’s best personal finance books
Next Story:
Here’s how they’re making fun of the Fourth of July in Poland

About the Author / C. Simionato