Why are so many people hoarding credit card points, miles & cash back?

The potential to earn travel, cash back and more are a few of the benefits that rewards credit cards may feature. With such valuable perks, it’s no wonder that 87% of credit cardholders have at least one that allows them to earn rewards, according to the latest LendingTree survey of nearly 1,300 credit cardholders.

Yet not everyone is taking advantage of the rewards they accumulate. In fact, the majority of rewards credit cardholders (almost 70%) have unused cash back rewards, points or miles.

Cardholders have untapped rewards available — why aren’t they redeeming them?

Most rewards cardholders (69%) are sitting on unused cash back, points or miles. However, LendingTree chief credit analyst Matt Schulz isn’t surprised by that percentage.

“Many people who collect rewards are doing so with a goal in mind, such as a dream vacation with their family,” he says. “As they earn, those rewards points and miles sit unused.”

Nearly half (49%) of rewards cardholders haven’t redeemed all the cash back available to them. Of that group, nearly a third (31%) have stockpiled $100 or more, including 11% who have $200 or more.

Below, you’ll find more insight into unused credit card rewards, and the types of rewards cardholders seem to stockpile the most.

The top three reasons why rewards credit cardholders are sitting on unused rewards are:

Stockpiling rewards for a future goal isn’t a bad idea. But rewards points and miles tend to lose value over time, so Schulz cautions cardholders to be careful about waiting too long before redeeming their rewards.

40% haven’t redeemed any credit card rewards in the past year, but baby boomers lead the charge generationally

In the past year, 40% of rewards cardholders haven’t cashed in on any rewards. But among the majority of cardholders who redeemed rewards, high-income earners took the lead:

“Airlines, hotel chains and credit card issuers have long catered to wealthier Americans because those folks are most likely to be able to afford to travel more,” Schulz says.

Higher income levels make higher credit card limits more likely as well, providing a higher ceiling when it comes to the amount of rewards, points and miles a cardholder can earn.

“For baby boomers, I think a lot of it is about simply having more time to travel,” Schulz says. “Many are retired and on a fixed income but have plenty of time to go places. Rewards allow them to travel more without wrecking their budget.”

Next, we examined how often cardholders redeem their credit card rewards:

Shopping around for the best deal could work in your favor when looking for any financing — loans, mortgages and, yes, rewards credit cards, too. Overall, 53% of cardholders say they compared multiple rewards credit cards before applying, including 11% who initially sought a specific card but changed their minds after looking into alternatives.

According to Schulz, there’s a staggering number of credit card options to choose from — and if you don’t do at least a little comparison shopping, you’ll do yourself a disservice.

“If you don’t shop around, you could end up with a higher interest rate, more fees, smaller credit limit or less lucrative rewards,” he says. “Those are the last things you need, especially with inflation running rampant.”

Here’s how shopping around for a credit card impacted cardholders’ final choice in terms of which account to open. 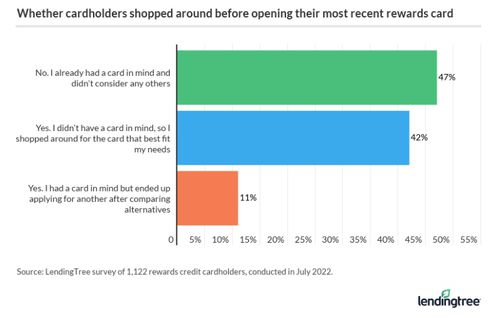 Here’s another interesting fact: Those who shopped around for a card are less likely to have unused credit card rewards than those who didn’t compare multiple cards (66% versus 73%).

As for the cardholders with higher redemption rates, Schulz speculates that comparison shopping may have helped them find a card that better fit their lifestyle.

“It could also simply be that those who were more engaged in the card-shopping process were also more engaged in collecting and redeeming those cards’ rewards,” he says. “Often, the more interested you are in something, the more likely you are to be willing to put in a little bit of extra work for it.”

Expired rewards and other redemption regrets

Most people don’t experience regret after redeeming the credit card rewards, points or miles they earn. Nonetheless, regret isn’t unheard of, either.

Of course, if you sit on some credit card rewards long enough, they might expire — and 15% of rewards cardholders say this unpleasant experience has happened to them. An additional 18% aren’t sure if they had credit card rewards expire, so that figure could be even higher.

The best way to prevent this problem from happening, says Schulz, is to be sure to use your credit card rewards.

“Obviously, you shouldn’t just redeem perfectly good reward points and miles for something that doesn’t give you good value,” he says. “However, it’s important to remember that rewards points and miles tend to be depreciating assets. They’re only going to get less valuable over time.”

Among those who wished they had redeemed their rewards differently after the fact, here are the most common reasons why those rewards cardholders felt that way. 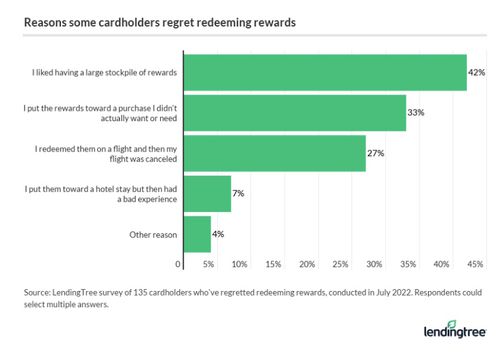 Below are five tips to maximize your credit card rewards:

LendingTree commissioned Qualtrics to conduct an online survey of 1,293 U.S. credit cardholders ages 18 to 76 from July 8-15, 2022. The survey was administered using a nonprobability-based sample, and quotas were used to ensure the sample base represented the overall population. All responses were reviewed by researchers for quality control.

Previous Story:
The states with the most car accidents may surprise you
Next Story:
6 reasons small businesses fail

About the Author / Michelle Lambright Black