Many of us associate Michelin stars with Europe and France in particular, the birthplace of the revered Michelin Guide and home to the largest number of Michelin restaurants in the world, where a fabulous Michelin meal can cost less than 30 euros (approx. $32).

But you don’t need to narrow your search to Europe if you want to enjoy a once-in-a-lifetime experience at a Michelin-starred establishment at an affordable price. Well, maybe not quite as affordable as in Europe, but pretty close nonetheless.

Now, as pandemic restrictions have finally lifted and US leisure travel is back to normal, the timing couldn’t be more perfect to travel to California and enjoy everything that it has to offer in terms of food and wine. Because it has a lot to offer.

The fine dining business in the Golden State has continued to flourish and expand over the past few years, and now you have 89 Michelin-starred restaurants to choose from.

A total of 27 newly starred restaurants were promoted by Michelin Guide in 2021 alone, so foodies now have more options than ever, and the food quality is amazing. Michelin inspectors praised California as “an international culinary destination and leader of the industry.”

Couple all of that with some exquisite Californian wine and it’s clear that the Golden State’s Michelin restaurants should be your next foodie travel destination.

We analyzed the menus of all the restaurants in California boasting Michelin stars to see which are the priciest and which are the most affordable locations in 2022. Prices tend to change, sometimes even week to week, but this list should give you an idea of which restaurants are within your budget.

The Most Affordable Michelin-starred Restaurants in California 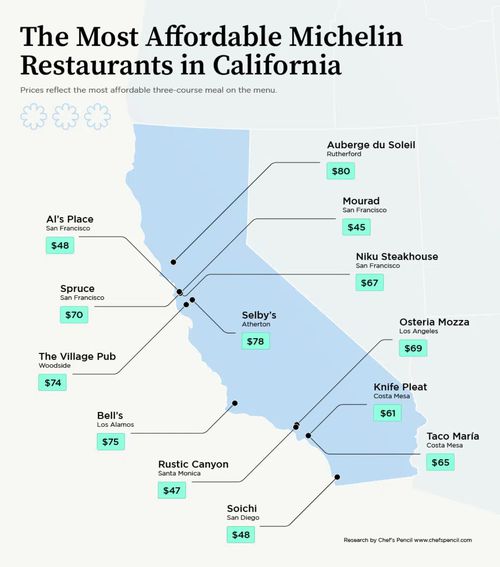 To find out which Michelin-starred restaurants in California are the most budget-friendly, we selected the most affordable three-course meals currently available. If you want to make sure that your Michelin-starred experience doesn’t break the bank, you just need to get creative.

In most cases, this means switching from a dinner date to a lunch date and trying out a restaurant’s  ‘menu of the day,’ when available. This is usually a much more affordable option than the regular tasting menu (See Methodology for the full breakdown).

San Francisco is a fantastic fine-dining destination. With 31 locations on the Michelin map, there is something out there for everyone and, believe it or not, it’s also home to more affordable options. In fact, 4 of the 10 most affordable Michelin star restaurants in California are located in San Francisco.

The most affordable Michelin-starred restaurant in California is Mourad, in San Francisco. Located at the base of the landmark PacBell building, the city’s first skyscraper, Mourad is the hotspot for tech-savvy foodies and tourists alike.

Chef Mourad Lahlou loves to add local flavors into his delicious Moroccan-inspired dishes, which include couscous with savory brown butter and spicy harissa or Moroccan basteeya. The good news is that you don’t need to work in tech to be able to afford a night out at Mourad: the most affordable three-course menu can cost you as little as $45 per person – that’s a true bargain for a San Francisco Michelin-starred venue.

Rustic Canyon in Santa Monica is another Michelin-starred restaurant worth checking out if you’re on a slightly tighter budget. For just $47 per person, you get to enjoy absolutely delicious dishes by Chef Jeremy Fox and Executive Chef Andy Doubrava, in a picturesque, relaxed atmosphere.

The menu is heavily focused on local cuisine, with ingredients sourced from local farmers; notable dishes include roasted asparagus in cashew cream topped with grilled cherries, or smoked pork chop with trout rote- and raisin-studded beurre blanc. There are also great options for those of us with a sweet tooth.

Another great affordable option is Al’s Place, also in San Francisco, where a three-course experience can cost you just $48 per person. Boasting a relaxed vibe and a casual, friendly atmosphere, Al’s Place is the epitome of Cali living – and dining.

The food, prepared with gusto by Chef Aaron London, is focused mainly around a pescatarian philosophy, but there are also options for meat lovers. One can enjoy dishes such as blistered squash with pickled kohlrabi, hummus and burrata, cured trout, mashed turnips, and the chef’s signature French fries, which were even featured in the San Francisco Chronicle.

Moving a little further south, we have Soichi, a Michelin-starred restaurant located in San Diego, where a three-course menu can cost as little as $48 per person. This one is a great option for those who love traditional Japanese cuisine, serving sushi and sashimi prepared by Chef Soichi Kadoya.

It’s the best place in town if you’re looking to unwind and relax in an intimate atmosphere, and enjoy two omakase options, as well as several à la carte items. We recommend finishing your meal with the chef’s delicious homemade green tea ice cream; just thinking about it makes your mouth water.

Knife Pleat restaurant in Costa Mesa might be a little pricier compared to Mourad or Al’s Place, coming in at $61 per person for the cheapest three-course meal on the menu, but it’s definitely worth it. It’s a great place to unwind and fuel up after an intense shopping session at Louis Vuitton or Balenciaga, as the restaurant is located on the third floor of the South Coast Plaza shopping center.

The elegant location showcases Chef Tony Esnault’s delicious creations, which include French classics with a twist – imagine how a rhubarb sorbet with strawberry gelee would go after a long day of shopping and strolling under the hot Californian sun.

The Priciest Michelin-starred Restaurants in California 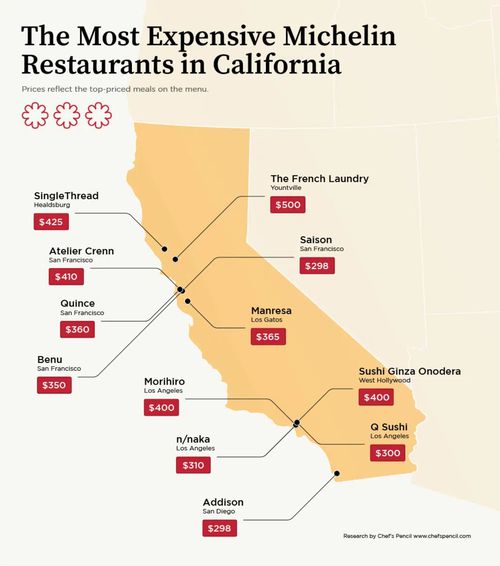 After checking out the least expensive Michelin-starred restaurants in Cali, it’s time to take it to the next level and look at the priciest options. If you’ve decided that you’re willing to splurge and make your night out a truly memorable experience, then these luxury restaurants are the way to go.

Once again, San Francisco offers the most options, housing 4 of the 10 priciest locations in the state, followed closely by Los Angeles, with 3.

The priciest Michelin-starred restaurant in California is the world-famous The French Laundry, located in Yountville, the heart of California’s Wine Country. Here you will get to enjoy some of the best wines – and dishes – in the world.

Yountville, while it manages to maintain a small-town atmosphere, is incredibly popular internationally among food lovers, as it’s home to two top-notch Michelin-starred restaurants: The French Laundry and Bouchon.

The French Laundry might not be a budget-friendly location, but if you’re looking to treat yourself, it will be worth it. You’d get to enjoy exquisite, three-Michelin-star-worthy dishes prepared by Chef Thomas Keller, who has a total of 7 (!) Michelin stars to his name.

And you might be surprised to learn that The French Laundry doesn’t come close the world’s most expensive Michelin restaurants – it only ranks 11th worldwide, far behind Shanghai’s Ultraviolet by Paul Pairet or NYC’s Masa.

If you’re not able to get a table at The French Laundry in due time, then you might want to give SingleThread a try. Located roughly an hour from Yountville in Healdsburg, SingleThread boasts three Michelin stars and menus that go as high as $425 per person.

Chef Kyle Connaughton delights the senses with his Japanese-inspired dishes, which pair beautifully with the exquisite wines of Napa Valley. The restaurant recently added a new hot pot-style menu dubbed Usu-Zan, which comes with four different options, including seafood, chicken and pork, ribeye and mushrooms, and seasonal vegetables. It’s definitely one to check off your bucket list.

The priciest Michelin star in San Francisco is Atelier Crenn, where one night out can cost you as much as $410 per person. Chef Dominique Crenn doesn’t need an introduction and she’s the only woman in the United States to attain three Michelin stars. To top it all off are pastry Chef Juan Contreras’ delights, which are a must if you’re visiting Atelier Crenn.

If you’re going to Hollywood and want to try out the priciest Michelin-starred restaurant in Los Angeles and maybe bump into some A-list celebrities, then Morihiro is your destination.

Chef Morihiro Onodera’s omakase is a wonderful treat for foodies, with ingredients mostly sourced directly from Japan, but it can cost you up to $400 per person. However, the restaurant offers some of the best sushi in Hollywood, prepared with homemade tofu, peak-season fruit, big eye tuna from Hawaii, and vegan mochi.

Sushi is hugely popular in California, and particularly in West Hollywood, where Sushi Ginza Onodera is located. This Michelin-starred restaurant offers Edomae-style sushi prepared by Chef Yohei Matsuki, who has his fish imported all the way from the Toyosu Fish Market in Tokyo.

In fact, this West Hollywood restaurant is a branch of the international Sushi Ginza Onodera brand, which first opened its doors to foodies in Japan. Although the food here boasts a hefty price tag, up to $400 per person for a meal, it’s definitely worth it. The restaurant is consistently featured among the best sushi spots in Los Angeles, and good news: there’s a strict no-tipping policy!

Chef’s Pencil analyzed menus from Michelin restaurants across California, to identify the priciest and the most affordable meals available right now (data collected from May 26 through June 2, 2022).

For the most expensive rankings, we analyzed the top-priced meals available at Michelin restaurants across the state. The top tasting menu is usually 8-12 courses served at dinner. Some restaurants offer a single tasting menu or multiple menus that are priced identically.

This article originally appeared on ChefsPencil.com and was syndicated by MediaFeed.org.

These are America’s oldest operating restaurants

Previous Story:
Is it too late to avoid an economic recession?
Next Story:
You have to see this glorious ancient forest in a Chinese sinkhole

About the Author / Caroline Williams