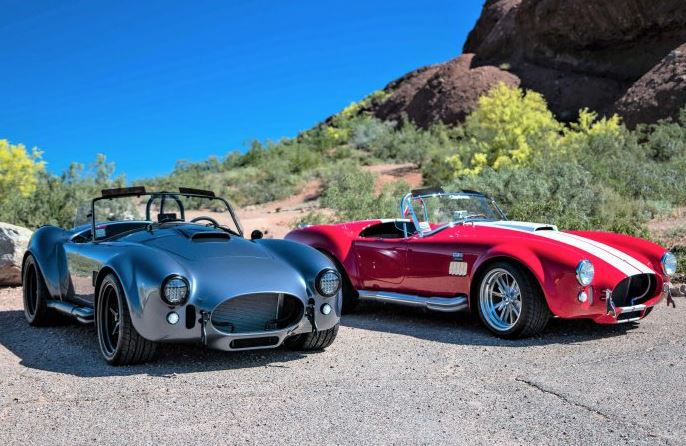 Any day driving 427 Cobras is a good day. With the promise of thunderous roars, inertia-shredding cornering and vast acceleration, anticipation ran high as we headed to the Hillbank Motor Sports dealership in Tempe, Arizona, to drive new Superformance Cobras.

What we didn’t know then was that the day would evolve into a generation-defining experience as well as a sports car romp.

As we arrived, Rebecca Nguyen, my 29-year-old colleague at the Classiccars.com Journal, said she would be content to ride shotgun with me since she already had driven one of the 500-horsepower-plus Cobras.

That thought evaporated as soon as she got a look at the cars they had set out for our test drive. There was a Red one with Wimbledon White stripes that I liked, a classic rendition of a 427 Cobra, essentially identical to the original – aside from a set of 18-inch chrome wheels and low-profile radial tires.

But it was the other one that caught Rebecca’s attention, especially once she looked under the hood and recognized the modern Ford Performance engine:  a fuel-injected, 32-valve 5.0-liter Coyote V8 rated at about 450 horsepower. This was more in tune with her age group of tuners and drifters, and she decided right then and there that she also would be driving. 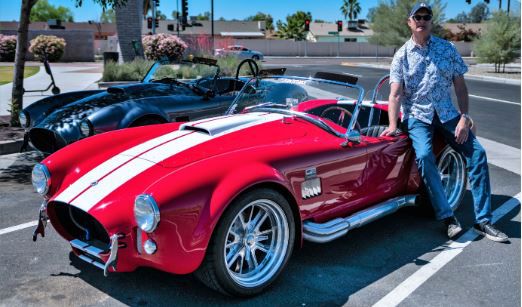 Both of the cars were Superformance Cobra Mk III 427SC models, designed directly after Carroll Shelby’s 427 Cobras competition cars of the 1960s and built under license from Carroll Shelby International. Yet they strikingly deviated from each other, as generationally different as the engines under their hoods.

The red car was clearly a retro Cobra meant to closely resemble those of more than 60 years ago, with shiny chrome trim, wheels and side exhaust pipes. The paint scheme was designed to evoke the look of the originals. 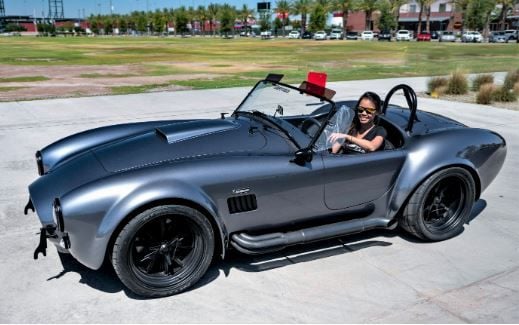 Under the hood was a massive 427cid pushrod Ford V8 produced by Roush Performance, with a Holly four-barrel carburetor perched on top and more than 500 horsepower on tap. Old school for sure, and very appealing to a Boomer car guy such as me.

But the other car, in a glimmering shade of Viper Steel Grey, was fitted with stylistic and functional updates seemingly designed to appeal to a younger generation. All the trim, including the side pipes and 18-inch wheels, was painted black, giving it a somewhat sinister look.

The headlights were a cluster of LEDs instead of halogen beams, and the steering wheel had a thick, cushioned leather rim in today’s style rather than the riveted wooden rim in the red car. This is very much a contemporary look for a Cobra, and Rebecca was smitten. 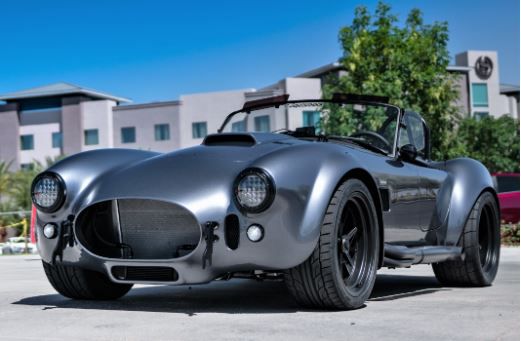 So with her in the gray car and me in the red one, we rumbled off in tandem for several hours of open-air driving. It was kind of funny how much the cars suited each of us – Rebecca looked great in her choice of Cobra; me, probably not so much.

We took off on some favorite local roads without too much traffic where we could get a feel for the cars, and raced each other on a few freeway ramps before settling in for the extended test drives.

Superformance Cobras are built to closely replicate the originals as much as possible, according to Hillbank Motor Corporation of Irvine, California, which markets them through about 20 worldwide dealerships. The Tempe store opened about two years ago, and it is the second-largest dealership behind the main Irvine location 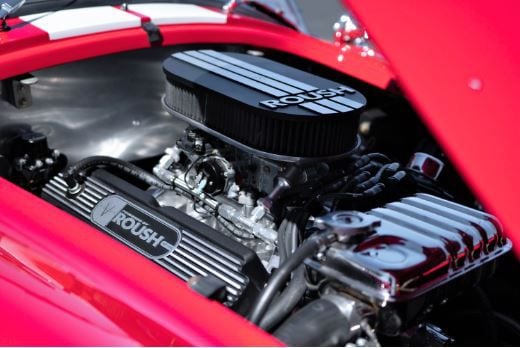 The Cobras, complete except for engines and transmissions, are built in South Africa for Superformance using the highest standards of engineering and assembly, the company says. Everything including brakes, suspensions, interiors, electrical systems and such are installed before they leave the factory.

A customer would buy the car from Hillbank as a roller ready for installation of the buyer’s choice of V8 drivetrains, which the dealership can arrange to make happen. This system is in accordance with federal regulations for small-batch auto manufacturers.

Most of the Cobra bodies are made of fiberglass, although aluminum bodies are available, and the frames and suspensions have been improved over the originals though still in keeping with the intent.

The idea behind owning a replica instead of a genuine vintage Shelby Cobra is, first of all, the difference in cost and availability. Original Carroll Shelby cars are selling in seven-figure territory, and they are limited in number. A completed Superformance Cobra costs in the $85,000-$95,000 range, depending on choice of engine and a few extras, and there are plenty to choose from. 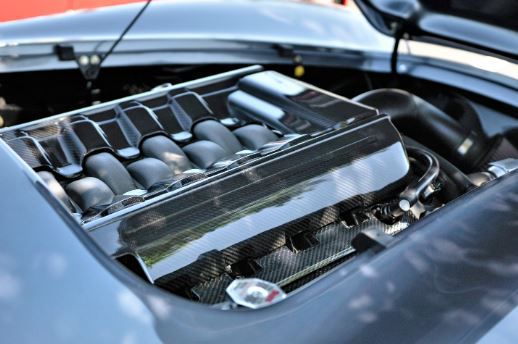 And as an essentially new car, a Superformance replica has much lower maintenance needs and costs than one that had been kicking around for six decades. The company has gained a good reputation for the durability of its cars.

What is certainly not diminished with the new Cobras is the thrilling performance. A Superformance Cobra, whatever the engine under the hood, has to be driven to be believed.

With the side pipes accentuating the exhaust bellow, the Roush Cobra’s raw-boned power felt limitless, and the sharp-edged handling seems road-course ready.

Each of the cars is exciting but reasonably manageable to drive for a vintage design without such modern niceties as power steering (the steering can get heavy at low speeds) or electronic safety nannies (so you must maintain control all by yourself). 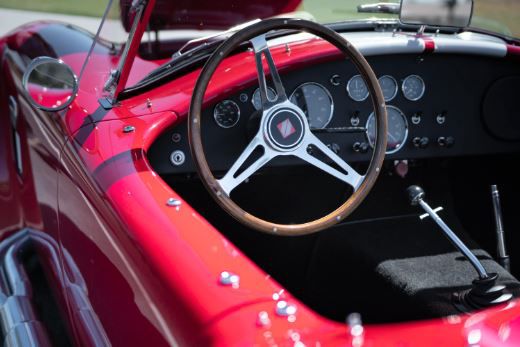 Yes, I could see how such lightweight cars with so much power could get away from you. Both cars had modern competition tires that gripped the road, but I found it fairly easy to hang the tail out with some throttle push while rounding a corner. Fun stuff, though hazardous for the unwary or overzealous.

The four-wheel Wilwood disc brakes are very strong, thankfully, and the steering is responsive and precise without being too aggressive.

The interior is purposeful and unadorned. The dashboards are fitted with classic Smiths and Lucas gauges, and there are none of today’s electronic gizmos to distract from the business of driving. There’s not even a radio.

Difference is in the engines 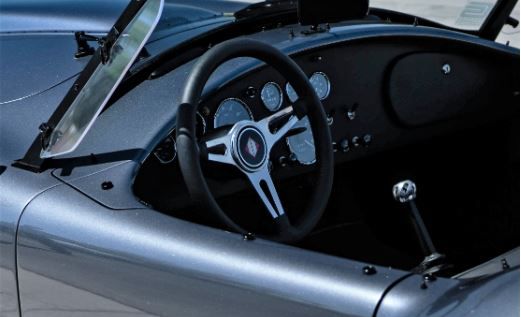 I drove both Cobras we were offered, the main difference obviously being the engines. The Roush V8 is pure muscle-car torque, though roaring lustily into higher rpm when you want it to. The test-drive car had a lumpy idle with a bit of jerkiness at low speeds, though it smoothed out nicely once it got going; it might have needed a minor carb adjustment.

The Coyote-powered Cobra had a smoother feel and it seemed to give up nothing on the power band to the bigger V8. It was still loud but less raucous, and with a decidedly different roar. The DOHC cam V8 revved more decisively, and it reached a sweet spot of pulling power somewhere around 5,000 rpm accompanied by a push between the shoulder blades. Again, careful respect for the unbridled power is needed at all times.

A matter of taste 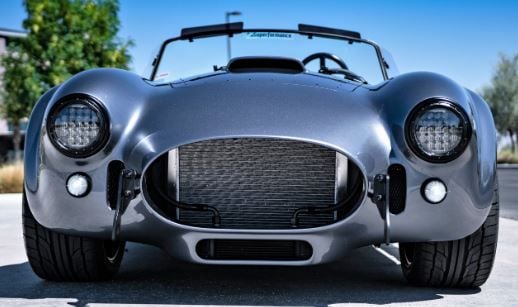 When you get down to it, the engine choice would be a matter of taste, whether you want the raw performance of the original-style V8 or the refinement of the tweaked Ford Performance factory engine. Whichever the flavor, these are exceptional machines ready to deliver the seat-of-the-pants immediacy that’s essentially lacking in today’s high-tech automobiles.

While the cars performed brilliantly, I did have a complaint and it is a personal one – I don’t fit. I’m 6-foot-6 with size-13 sneakers, and legroom was a major issue. The footwell is narrow and canted to the left because of the wide transmission tunnel, which made it hard for me to manipulate the pedals without contorting. Hitting the brake instead of the clutch is abruptly unpleasant and embarrassing. 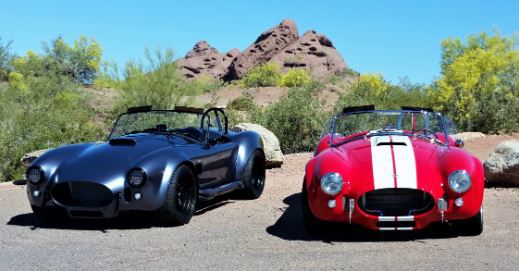 That, and there was no place for me to rest my left foot aside from hovering over the clutch pedal. Anyone who’s extra tall, like me, or packing some extra weight would need to try these cars on for size before buying. I was told that there are some alterations possible, mainly to the seats, to create more space for an oversized driver-owner.

Automatic transmissions are available, but they are rarely requested because most buyers know better.

For slim, not-real-tall Rebecca, the fit was just fine, although she said she had to stretch to push in the clutch pedal all the way. Again, the company could alter that for a customer.

Another issue was the constant adoring attention generated by these highly recognizable machines. A bit disconcerting in moving traffic when other drivers sidle closer for a better look. And you need to be ready for a conversation with whomever comes up every time you park.

With the V8 thunder ringing in our ears, we handed back the Cobras after several hours of aimless fun roaring around in the performance icons. Loud, overpowered and attention grabbing, they are not for the mild-mannered.

But they do bring forward on their own terms one of the greatest expressions of sports car innovation, bolstered by the back story of Carroll Shelby’s brilliant achievement. 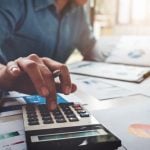 Previous Story:
Credit 101: What is an installment account & why should you care? 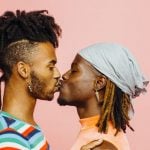 Next Story:
A guide to shopping for insurance when you’re LGBTQ