The states with the most car accidents may surprise you

Most Americans need to drive on a regular basis, whether it’s to work, to the grocery store, to see family and friends, or all of the …

The Inflation Reduction Act will replace current EV tax credits with new ones, but there are some confusing limitations and timelines to sort through. President …

The costs of owning a car continue far past the date of purchase. Based on the latest study on driving costs by the American Automobile …

The best drivers live in these states, research shows

Rates of reckless driving behavior have risen dramatically across the country during the past two years with few signs of slowing down.1 While such elevated rates started …

The fastest way to your new electric vehicle: Convert your gas guzzler

It’s a classic dilemma faced by car shoppers: Buy new, or buy used? But as climate change fuels the popularity of electric vehicles and the …

How to keep your old car from becoming a money pit

Worried about your car becoming a money pit? A money pit is something that drains your financial resources. Some money pits are well-known. One is …

Believe it or not, you can get across the United States in an electric vehicle (EV). The U.S. Department of Energy (DOE) has created “alternative fuel …

Brace yourself: Inflation is coming for your car insurance

In 2020, at the start of the COVID-19 pandemic, many Americans were pleasantly surprised when car insurance companies began issuing refunds on insurance premiums. More people staying home …

July 4 week could be deadliest of the year for drivers

Drunk driving remains a significant problem throughout the country. But certain days are more dangerous on the roads than others. MoneyGeek analyzed historical data from …

Here’s how much that dream exotic car will cost you

You’ve probably imagined yourself behind the wheel of a Lamborghini, cruising in a Maserati, or putting the pedal to the metal in a red Ferrari. Exotic …

Summer is usually the perfect opportunity to go on a long drive with the windows down and the radio on. With COVID-19 still surging in the …

Gas prices soar to a new high in the US … again

Americans are plagued by inflation in many different way, but gas prices must be one of the worst headaches. The price of one gallon of …

The most popular luxury car in every state

If you’ve reached a point in your financial life where you can afford your dream car, congratulations! But now that you have the cash stashed away, …

A New Zealand grandma has found a way to be the change she wants to see in the world.   Sixty-three-year-old Rosemary Penwarden converted an …

These RVs are perfect for summer travel

When it comes to travel trailers, there are a lot of different brands on the market. This article will discuss 10 of the best travel trailer …

While the pandemic has made many people more careful evaluators of risk, one everyday activity (driving) has quietly become more dangerous over the past two …

Here’s where people are paying the most for gasoline

The price of gasoline in the United States is climbing once more as markets remain in turmoil following Russia’s invasion of Ukraine. Additionally, the Biden administration’s embargo …

Here’s where people pay the most for car insurance

To legally drive in most states, you need to have car insurance, with the minimum amount determined by your state of residence. We should really refer …

Unfortunately, in the U.S., there’s no federal legislation mandating equal rights for all U.S. citizens regardless of gender, as the Equal Rights Amendment has yet …

Can you afford a classic car?

Most people buy cars for practical purposes. They need transportation to get to and from work and to run errands around town. But for classic car …

You can save a lot of money by switching to a battery electric vehicle (BEV): up to $14,500 over 15 years in lower fuel costs, according …

This is the worst state for electric car owners

Even as the recent spike in gas prices reinvigorated American interest in electric vehicles (EVs), the U.S. automotive industry and federal agencies under the Biden administration had already …

Plenty of Americans like to complain that their city has the worst drivers. In fact, doing so is something of a national pastime. After all, grumbling …

Does your state have the most distracted drivers?

Driving in America means sharing the road with distracted drivers — or being distracted yourself. Talking on the phone, checking your directions or even daydreaming …

While most Americans are eager to forget the shelter-in-place orders that defined the early days of the COVID-19 pandemic, many drivers haven’t forgotten many of the …

Worried about your eco footprint? You may want to avoid these cars

Can you actually make money renting your car?

The COVID-19 pandemic has driven up rental prices, which may not get back to normal until 2023, according to some experts. In addition, people who are …

Have you ever seen a rolling memorial to talented and prolific TV artist and art instructor Bob Ross? Well, I’m about to make that a verifiable …

Watching this guy detail this filthy minivan is deeply satisfying

People are cleaning stuff up. Hard. Maybe it was the Pandemic that got people so motivated to clean and organize. Sure we all washed our hands … 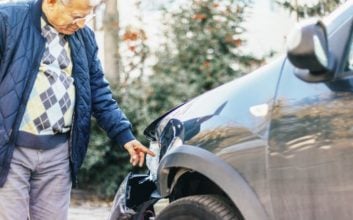 Sure, you’ve seen some bad drivers, but wait’ll you see this

Remember that old George Carlin bit on bad driving? “Have you ever noticed that anyone driving slower than you is an idiot, and anyone going faster …