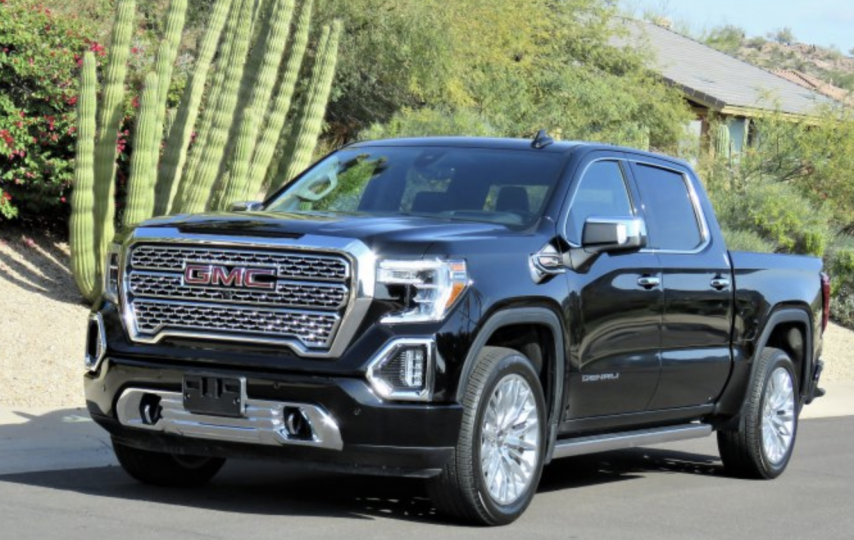 Let me say right from the start that I don’t really get these humongous crew-cab pickup trucks. They keep growing bigger and more imposing, with cathedral-size interiors and engine hoods that are five feet off the ground.

How many people have garages in which these behemoths can be parked? And how many people actually require such plus-size capability? Or are they just driven them as some kind of más macho status symbols?

Put another way: Are these the land yachts of the new millennium, today’s renditions of ’59 Cadillacs?

But the thing is, the current crop of full-size pickups drive with comparable sophistication to passenger cars, and they can come equipped with the same level of luxury gear, making them viable everyday vehicles despite their spatial excess and fuel-mileage profligacy. 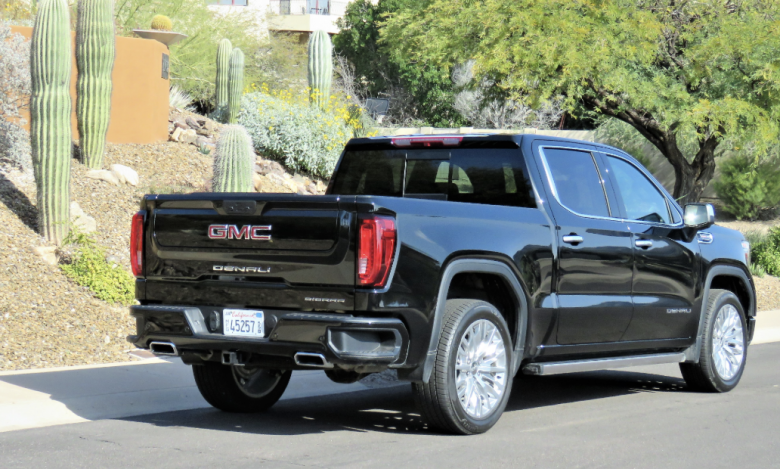 They make sense for someone with something heavy to tow, like a major camper or a significant boat, while doing double-duty as the family runabout. They also can be ideal for someone who’s a construction-business owner or contractor who spends a lot of time in the truck and wants space for passengers and a large cargo bed for hauling supplies.

The GMC Sierra (and its near-twin Chevrolet Silverado) grows again for 2019, with a longer wheelbase and longer crew-cab body, including three additional inches of legroom for the rear seat, which easily has enough room for a trio of NFL linebackers to sit comfortably three across.

The test truck was a supremely outfitted 2019 Sierra Denali Crew Cab, an over-the-top luxury craft on a grand scale. The list of standard equipment is lengthy, with a load of luxury trim, infotainment functions, driver’s aids and safety features, including backup and surround-view cameras that are critical for piloting this craft in tight places. 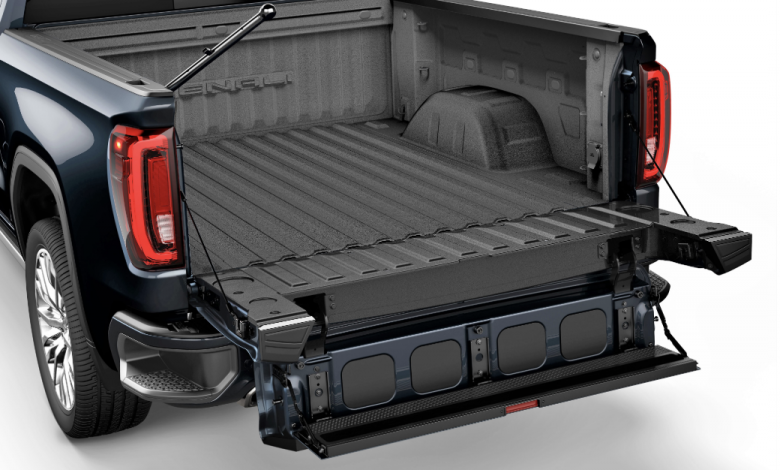 The most remarkable feature of the Sierra Denali is not electronic, however. That would be GMC’s exclusive MultiPro tailgate, a first-of-its-kind effort to enhance the tailgate with a sort of Swiss Army Knife functionality. The MultiPro, which is standard on upper-level Sierra models, can be configured into six positions that make it a highly practical addition that others will be copying soon.

With it closed, there’s an upper, smaller tailgate within the main tailgate that swings open separately to create an impromptu standing work table or al fresco dining bar – which would be great for tailgating.

Closing that and opening the tailgate, part of the smaller section swings upward with the push of a red button to form an oversized-load stop to keep long items from sliding out. You can also use that load stop with the tailgate closed and the “work table” opened to create a two-level loading setup.

That section drops down when the tailgate is open to form a cutout so that you can stand closer and reach further into the bed. Part of that cutout also drops down to create a step to make it easily to climb into the back of the truck. The step is sturdy and secure with a maximum load of 375 pounds. A long grab handle deploys from the left side so you can hold on while stepping up and save yourself from looking too awkward.

The cargo box is special 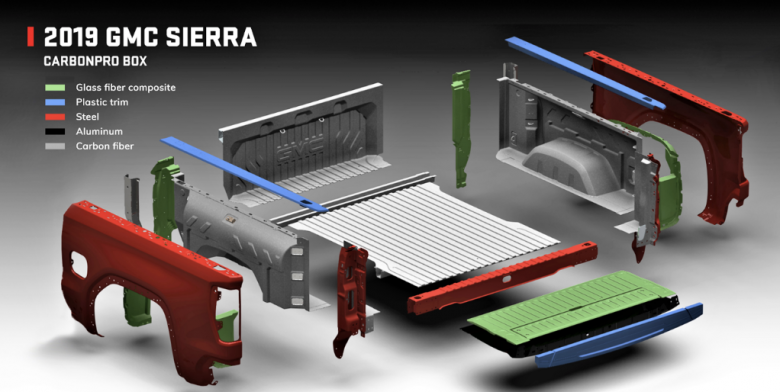 MultiPro is a nice piece of imaginative engineering that makes dealing with the truck’s elevated cargo bed easier and safer. Sierra also has a deep step built into the rear bumper, and the automatic slide-out running boards on either side of the Denali extend rearward enough to stand on and reach into the bed.

The cargo box in the upper-level Sierras is another special item called CarbonPro, made of carbon fiber, which GMC says is lighter and more rigid than a steel bed. The outer fenders are steel.

The truck is lighter than before

The entire truck is 360 pounds lighter than the previous model, the automaker says, because of the carbon-fiber cargo box; aluminum instead of steel for the doors, hood and tailgate; and fully boxed frame that has been redesigned and lightened.

The test Denali had a mighty 6.2-liter V8 under its hood, with Dynamic Fuel Management that “expands cylindered activation capability with 17-cylinder activation combinations to optimize performance and efficiency in all driving conditions,” according to GMC.

Despite that, plus automatic start-stop that shuts off the engine when standing still and the truck’s newfound lightening, fuel mileage is rated at an unimpressive 15 city and 20 highway. But then again, you don’t buy these things for their fuel mileage.

The engine, with 420 horsepower and 460 pound-feet of torque, feels very strong and smooth, and it provides the 4X4 truck (with the 5-foot, 8-inch bed) with a towing capacity of 9,600 pounds. The bed has a payload maximum of 1,610 pounds. The Denali comes with the ProGrade Advanced Trailering Package, including Hitch Guidance with Hitch View and Trailering App.

It boasts a very attractive interior 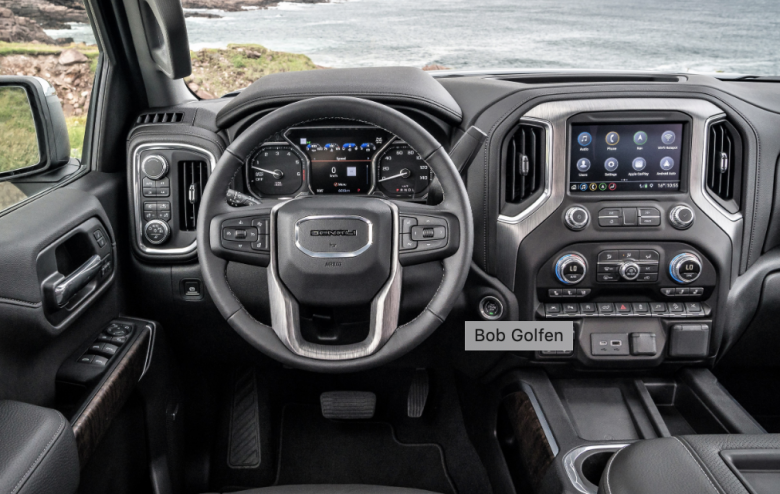 The automatic transmission has 10 gears, which must create a lot of shuffling back and forth, but you hardly notice it’s there. Everything about this truck is smooth and seamless.

The test Denali was a 4-wheel-drive model with a number of off-roading settings and enhancements, though I’d be hesitant to take this gorgeous truck anyplace wild. I have sampled GM full-size 4X4 trucks in the past, and they most certainly get the job done.

Denali also has Adaptive Ride Control that continuously adjusts the suspension to mitigate lumps and bumps on the highway. The Denali does ride like a cloud, especially for such a capable 4X4 truck.

That cloud does have a silver lining, the Denali boasting a very-attractive interior with dark wood and aluminum trim, plus loads of buttons, switches and a big video screen. The premium Bose audio system is terrific. A color heads-up display on the driver’s side of the windshield reveals such info as vehicle speed, local speed limit and following distance from vehicles ahead.

I put a bunch of city and highway miles on the Denali, and while I found the drivability and ride to be exceptionally nice, especially for a gigantic truck, I could not shake the feeling of its immensity. I suppose I could get used to it; I did grow accustomed to the Chevy Suburban that I drove for several years.

But even in the wide-open Western expanses of Arizona and the Phoenix metro area, the Sierra felt huge. Fortunately, I never attempted to parallel park. That would have been ugly.

But it doesn’t come cheap 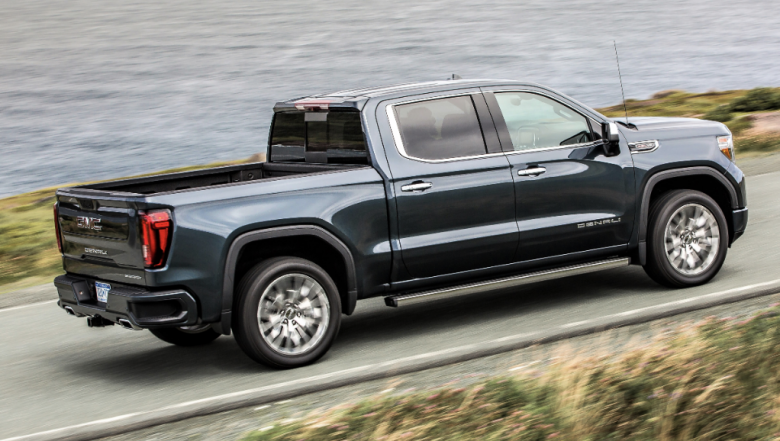 There’s a hefty price to pay for all of Denali’s grandeur and capability, with the test truck and its $8,345 load of option hitting a bottom line of $67,340. The Denali does have a tremendous amount of luxury-car content, of which I have just scratched the surface here.

Naturally, the new Sierra can be had as a regular work truck for getting around and getting it done. The Denali model is something else again, with all the amenities of a top-drawer luxury sedan combined with the capabilities of a full-size truck. 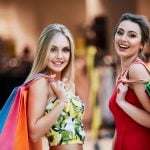 Previous Story:
How to save money when you shop 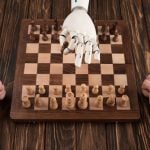 Next Story:
How to work smart in the age of artificial intelligence