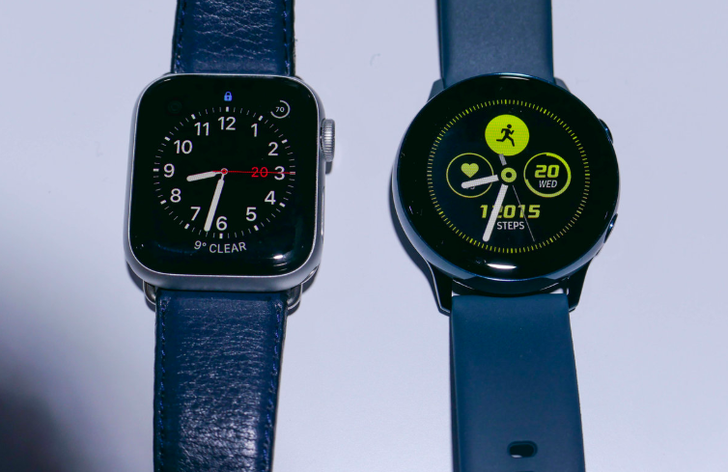 Its slim, stylish and lightweight design will please many consumers tired of bulky smartwatches – like Samsung’s own, the Galaxy Watch. But more than that, the Watch Active could pose a direct threat to the Apple Watch, and it even has a feature the current smartwatch king misses out on; blood pressure monitoring.

The Galaxy Watch Active goes on sale towards the end of March and at $200 is half the price of the cheapest Apple Watch Series 4. Here’s a quick look at how the two wearables compare.

The Samsung has a round case with a diameter of 40mm, making it more compact than most other smartwatches, and is closer in scale to hybrid watches from Withings. This is impressive from Samsung, as for too long smartwatches from anyone other than Apple have been universally chunky.

At 40mm, the Samsung is the same size as the Apple Watch, which is offered in 40mm and 44mm sizes. But the Galaxy Active’s circular case makes it seem more compact than the rectangular Apple.

During our brief hands-on time with the Samsung we felt it offered a similar case thickness to our own 40mm Apple Watch Series 4, and both felt very similar on the wrist.

Also similar is the metal construction of the case, however where the entry-level Apple Watch is finished in matt aluminum, the Samsung goes for a classier chrome look. Apple offers this too, but only on the more expensive stainless steel versions of the Watch.

Samsung is offering the Watch Active in three color options: matte black, chrome, and matte rose gold. All three look great in their own way, each oozing with class and sophistication in a way we haven’t really seen from Samsung before.

Also welcome to see is how the Watch Active accepts industry-standard 20mm watch straps, so it’s cheap and easy to switch up the look of it.

Perhaps the biggest news for the Galaxy Watch Active is how it does not have a rotating bezel – until now a staple feature of Samsung’s smartwatches. The reason here is to lower complexity, size and cost, which all makes sense, and the Tizen operating system can still be used as before, by swiping at the screen instead of turning the bezel.

There are also buttons at two and four o’clock for navigating the software. The Apple Watch, on the other hand (wrist?), employs a touch screen, button, and a rotating dial which can also be clicked, known as the Smart Crown.

At 25g, the Samsung’s case weighs around 5g less than the Apple Watch Series 4, making it a seriously light wearable. But, importantly, it still feels like a quality device.

Being modern smartwatches, the Apple and Samsung have a lot of features in common. They both offer a way to receive notifications like messages and calls on your wrist.

They also both track your health and fitness – something the Watch Active puts front-and-center.

As well as the usual abilities to track your walking, running, cycling, swimming – plus many other exercises like yoga, rowing and gym workouts – the Samsung has a brand new feature; blood pressure monitoring.

A new app called My BP Lab, jointly created by Samsung and the University of California, San Francisco, the app monitors your blood pressure during your daily routine. However, the system isn’t yet perfect. Samsung says it doesn’t yet have FDA approval so, while it can be used, it isn’t a certified piece of medical equipment – as the Apple Watch Series 4’s ECG feature is in the US.

Additionally, Samsung says Watch Active users will need to know their blood pressure in advance, then use the watch to keep tabs on it. The demo units we used at the launch event did not have the feature enabled.

As with its predecessor, the Gear Sport, the Active can automatically detect and track running, cycling and workouts. There’s also GPS so you can record the route and elevation of runs while leaving your phone at home, and the watch is water resistant to 5ATM, which means it can survive a swim.

The Apple Watch shares many of these features, but doesn’t have quite the same breadth of fitness activity tracking as the Samsung. However, both offer a guided breathing app, and both have wireless charging.

Samsung says its watch can last up to two days on a charge, while the Apple Watch is limited to 18 hours. The Samsung has 4GB of internal storage (for playing music to Bluetooth headphones), while the Apple has four times that, with 16GB.

Overall, the Samsung Galaxy Watch Active is looking like a very strong contender in the wearable market. It is stylish, light, and packed full of fitness tracking features – yet costs just $200, half the price of the Apple Watch Series 4.

We’re curious to see if the blood pressure app is more than a gimmick, but otherwise we think the Samsung is a strong offering. It goes on sale on March 25 and costs $199.99. 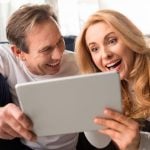 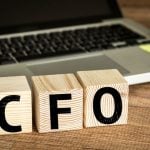 Next Story:
Does your business need a virtual CFO?