These are the states where traffic is the worst 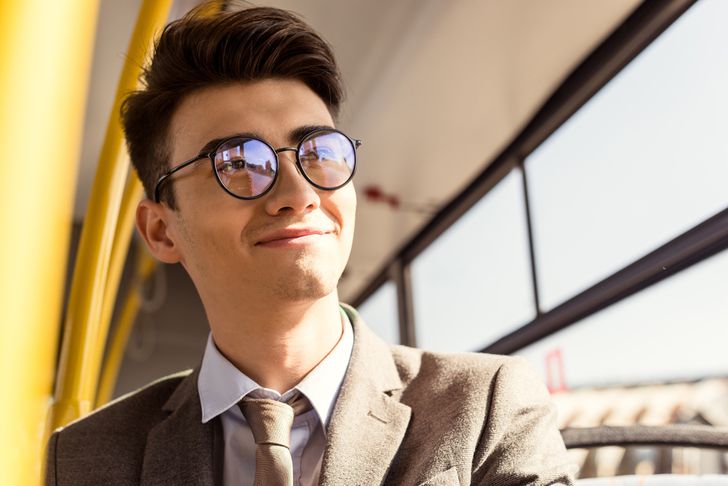 Does it just seem like traffic is getting worse in your state, or is it really the case? ValuePenguin analyzed traffic density statistics from the Department of Transportation and found that traffic increased by 8.2% from 2012 to 2017, with Americans logging more than 3.2 trillion miles in any given 12-month period. Here are the states where traffic is increasing and decreasing the most. 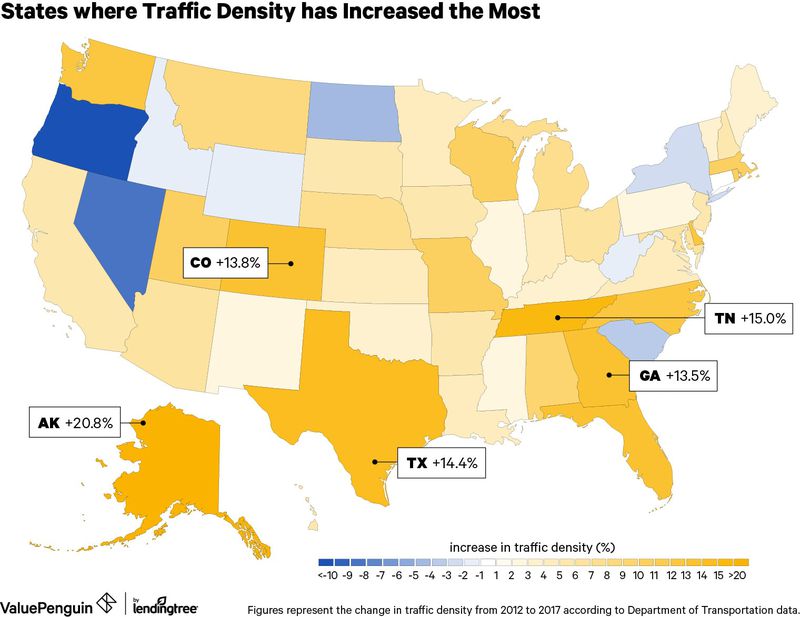 In Alaska, traffic density increased more than three times the national rate. The main contributor to this drastic rise in traffic are the number of miles driven on Alaskan roads, which increased by 727 million — a growth of 15.2%.

Compared to its neighbor Alabama, traffic density in Tennessee increased by 56.0% when comparing 2012 figures to those in 2017. In this state, the total miles of roads increased by only 0.5% despite a 15.6% increase in the number of miles driven.

Texas’ traffic density increase caused the state to jump five spots in the rankings of states with the worst traffic problems, from 22 in 2012 to 17 in 2017. Additionally, Texas’ traffic was 13.0% worse than the national average in 2017 — which is surprising given that the state has the most miles of public roads of any state.

Colorado’s roads are getting more use than ever in recent years, with roadway usage (as measured by total miles traveled in the state) increasing by 14.1% from 2012 to 2017. This, paired with the fact that there was only a 0.3% jump in the total number of public road miles — which is 83.0% less than the nationwide figure — contributes to Colorado’s having one of the biggest traffic density increases in the country during the span we looked at for this study.

Despite the fact that Georgia roadways were being expanded during the time period we looked at for this study, the state’s substantial jump in roadway use was enough for it to rank as the state with the fifth largest traffic density increase. In fact, the 16.0% jump in miles traveled in the state from 2012 to 2017 was the third largest increase of any state, beaten out only by Utah and New Mexico.

Roadway use increased by as much as 18.6% in some states

Utah saw the greatest jump in the number of miles driven, with the state seeing an increase of 18.6% from 2012 to 2017. This is 10.4 percentage points greater than the nationwide gain of 8.2% over this time period. At the other end of the spectrum, North Dakota saw a drop in total miles driven of 3.6%, which is surprising given that the population in the state grew by 8.0% during the same span.

Expanding roadways are not keeping pace with increased usage

Nationwide, roadway mileage has only increased by 1.8% and is outpaced by the usage increase of 8.2%. However, in the six-year span that we considered for this study, we found that some states have dramatically expanded their roadways. The leader in this respect is Oregon, where the total length of all public roads in the state increased by 33.8% — 32 percentage points greater than the nationwide change. Contrarily, 11 states saw a decrease in public roadway miles — with Rhode Island leading this group with a drop of 7.0% during the time period we considered.

In addition to being frustrating for drivers, higher traffic density can also lead to greater car insurance costs. This is because anytime you have more vehicles driving in close proximity to each other, the likelihood of crashes occurring increases. When this translates into more frequent auto insurance claims, insurers react by raising premiums. In fact, some of the states with the highest average costs of car insurance in the country also have some of the biggest traffic problems — including Rhode Island, New Jersey and New York.

ValuePenguin looked at highway data available from the Federal Highway Administration in 2012 through 2017 to determine in which states traffic has increased the most over the past five years. Mileage includes interstate, state and local roads, both urban and rural. Mileage includes both commercial and non-commercial traffic. Traffic density is measured by miles driven per mile of road in a given state. 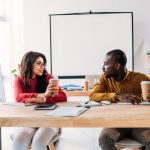 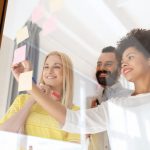 Next Story:
Is it time for your small business to sell products internationally?

About the Author / Bailey Peterson