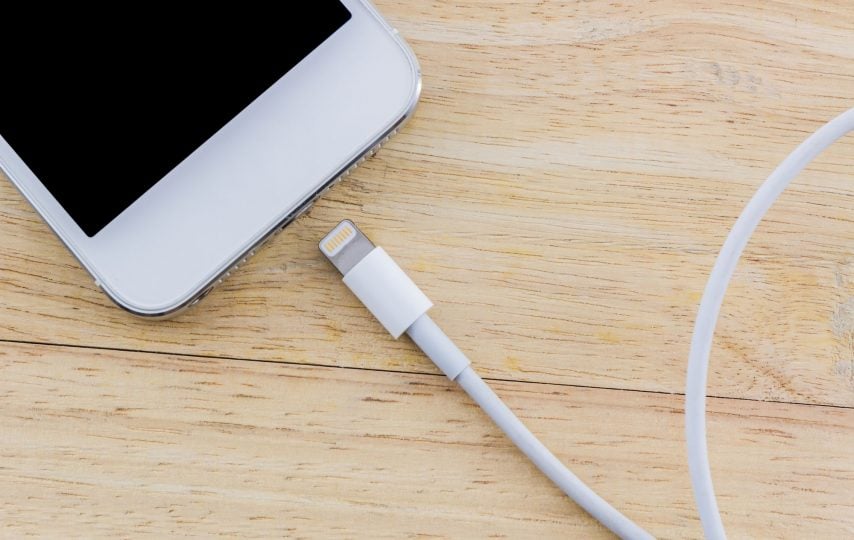 Imagine being able to charge your smartphone without plugging it in. Imagine a world in which you can sit in a restaurant or wander through an airport while your smartphone charges automatically. No wall jacks, USB chargers or battery packs — just you and your phone.

Wireless power charging is already on the market. Qi (pronounced “chee”) is a “near field” wireless power source that is compatible with all of the major smartphone brands. This technology allows you to charge your device simply by placing it on a pad rather than plugging it into another device.

The next generation of wireless power, though, works like Wi-Fi. Unlike Qi pads, which function via resonant technology, these devices can transmit up to five watts – enough power to feed your smartphone or other small gadgets – through thin air. This power can be beamed from an alternating current (AC)-connected transmitter and intercepted by your devices. 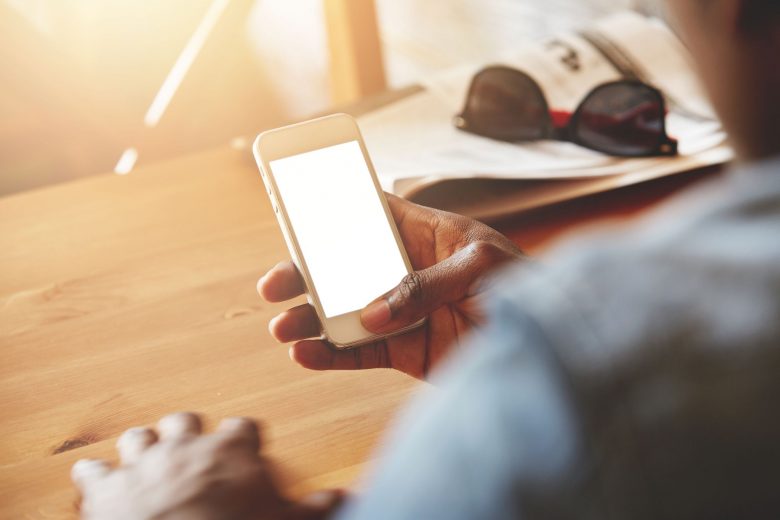 With wireless power, you could charge multiple devices simultaneously (even if they’re moving), and know to stop once they’re fully charged.

Sounds like a utopia, right? Perhaps, except that wireless power transmission — also known as “air power” — is not being developed under the auspice of objective standards groups like Wi-Fi and Bluetooth were. Rather, at least four companies are developing proprietary  (and, more importantly, incompatible) wireless power transmission systems. Some of these systems operate via radio frequency (RF), much like Wi-Fi does. Others rely on infrared (IR), the same technology that’s utilized by TV remotes. Some of these systems will even use ultrasound. Each setup features its own pros and cons. For example, infrared and ultrasound wireless power transmission operate via line-of-sight, meaning that they can’t charge devices that are tucked into pockets or around the corner. That’s inconvenient. 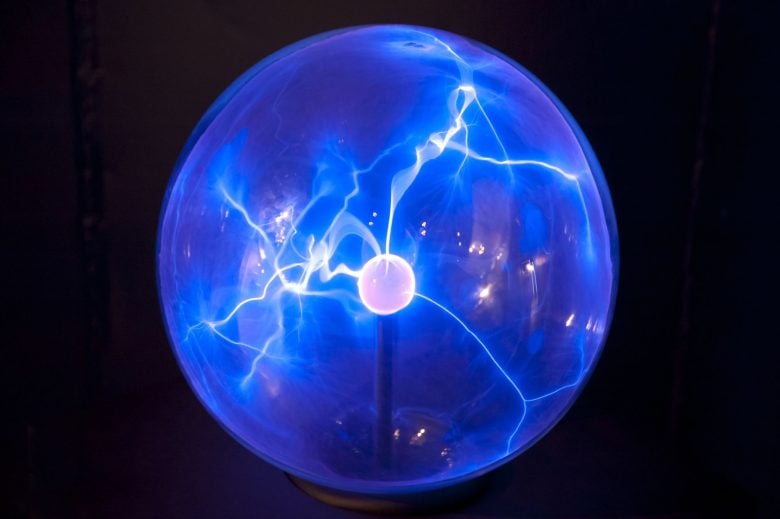 The underlying principles of air power date back to Nikola Tesla, Michael Faraday and James Clerk Maxwell. Today, this new attention to air power is likely to change how you interact with your the devices.

Your attitude toward charging your toys will change from active to passive on a day-to-day basis. Sure, charging a dead smartphone via air power will take two to three times longer than plugging it into a wall, but an air-powered smartphone is theoretically charging all the time. This means that it’s unlikely that your smartphone will ever run out of juice. You’d never have to worry about your smartphone’s battery level again.

Ditto for air-powered gear like AV remote controls, Bluetooth headphones, speakers and keyboards. All of these devices will always have juice. Most of these gadgets will probably come with power cables in case air power isn’t an option. 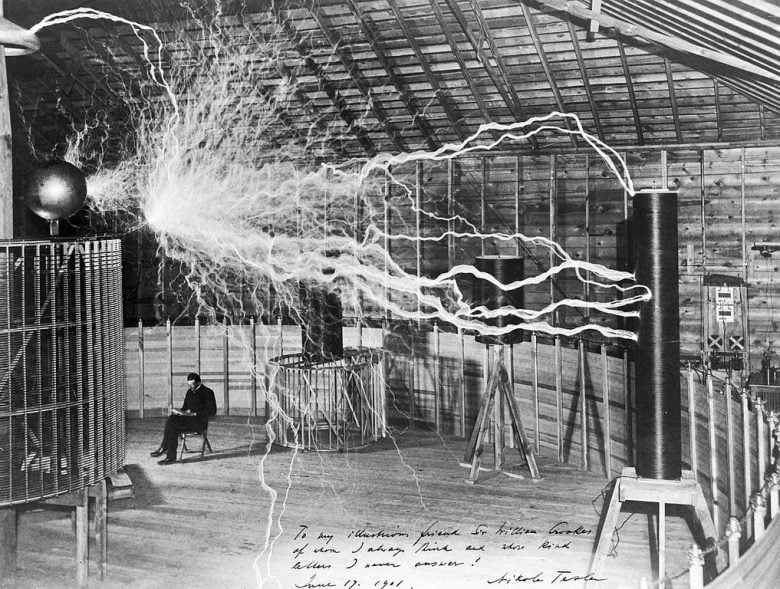 Just how safe are these air power schemes? First, check out this photo of Nikola Tesla calmly sitting a room filled with stray electrical charges. Airborne electricity didn’t seem to cause Tesla any problems. Radio frequency-based air power systems work the same way that Wi-Fi does.

While it’s hard to guarantee that this technology will produce no ill effects, note that all air power vendors in the U.S. must receive FCC or FDA approvals for RF and IR power, respectively. These certifications include safety qualifications.

Air power will likely be deemed safe even when it’s being delivered at long distances and at higher power. Setups like these will give air power enough juice to charge devices like laptops, robot vacuum cleaners, media streamers and drones.

“The distances that can be achieved, theoretically, are really unlimited,” noted Sanjay Gupta, president of the AirFuel Alliance, a non-profit organization that proposes interoperability control and command protocols for wireless power systems, “…and we’re limited to five watts but we’re getting a lot more in the lab. The constraining factor is safety and the regulatory environment.” 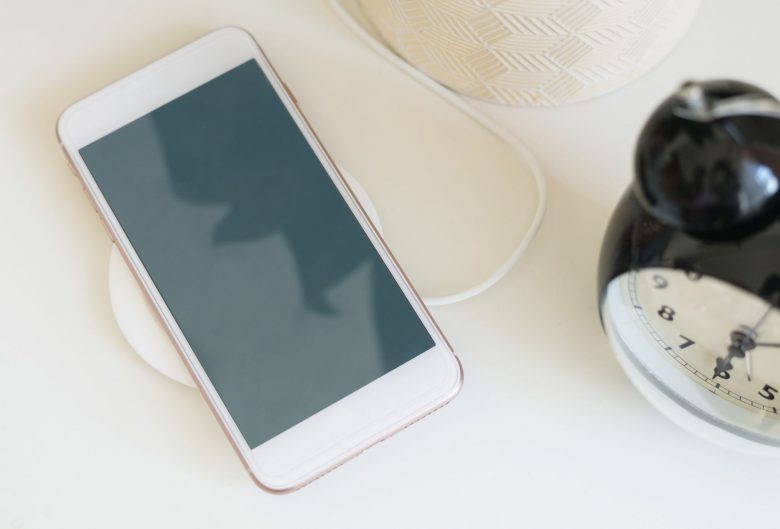 Four companies seem poised to ignite the air power revolution: Energous, with its RF-based WattUp system; Ossia and its RF-powered Cota (Charging Over The Air) system; the IR-based Wi-Charge; and the ultrasound-utilizing uBeam. Each of these companies licensed its technologies to both device and chip manufacturers.

The aforementioned AirFuel Alliance is the organization that’s trying to herd all of these proverbial cats. While the Alliance boasts more than 70 members, only one – Energous – is working on an actual air power system. Ossia, Wi-Charge and uBeam are not AirFuel Alliance members (probably because each is trying its establish its own de facto air power standard, which would be a hugely profitable prize).

Which air power contender is likely to emerge victorious? 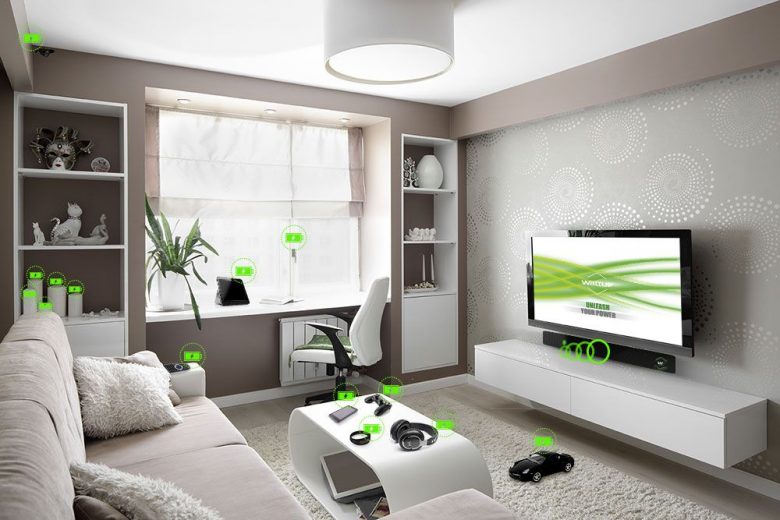 Energous is a publicly traded company (NASDAQ: WATT). It’s well-funded, has government regulatory approvals and boasts a partnership with a top 10 consumer electronics company. Energous CEO Steve Rizzone does admit, however, that there’s no guarantee that its technology will actually appear in any of its own products.

Energous is readying a three-pronged, RF-based wireless power ecosystem called WattUp. WattUp is built out of a tiny, inexpensive, “near-field” chip set that can transmit power up to a few feet away. WattUp also features longer-range charging capabilities. Each of these variants will roll out in timed phases, with the long-distance “air power” transmission due out in either late 2019 or early 2020. According to Rizzone, “a number of companies will begin manufacturing quantity chip sets toward the end of th[is] year.” While Energous seems to be in the best position among air power providers, even Rizzone readily admits that “we’re not going to own the market.” 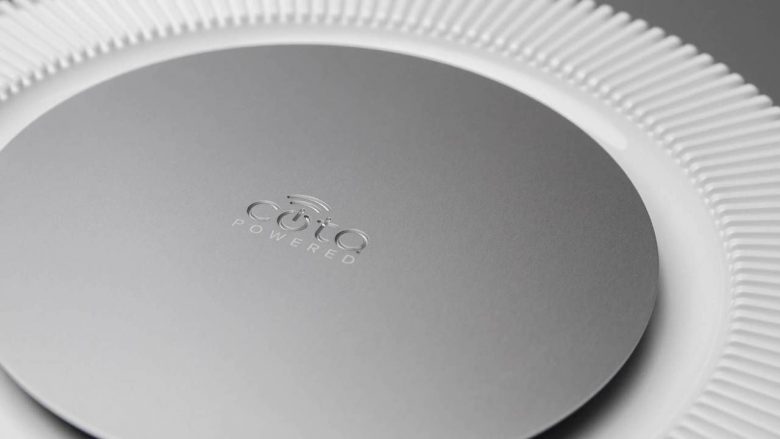 Ossia (pronounced “oh-SIGH-ae”) is developing several RF air power schemes for different applications under the Cota brand. Its 2.4 GHz-based systems, for instance, are designed to deliver wireless power to stationary products like smart home devices. On the other hand, its 5.8 GHz-based system will be used for smartphone, handheld and IoT gear. One of Ossia’s most fascinating products is its Forever Batteries, which never die as long as they receive power from an Ossia air power transmitter.

Ossia is working with a variety of partners. According to the company, “Cota technology is currently ready to be licensed by our partners. We are in different stages of development with multiple players. Depending on the implementation, Ossia expects partner companies to be shipping Cota-enabled products by the end of 2018 or early 2019.” However, this timeline is likely dependent on regulatory certification. The company notes that it “is currently working toward FCC approval and expects it to come in the coming months.” 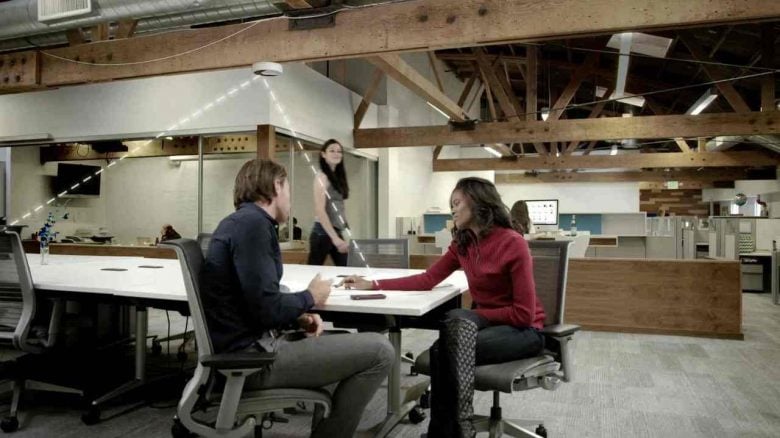 This Israeli company is able to use infrared signals to transmit up to three watts of power from a ceiling or shelf-based transmitter. This power can be intercepted by devices that are low-power, battery-powered and Wi-Charge-compatible. These transmitters can also charge devices that are up to 15 feet away and within a 90-degree radius. While the company has demoed Wi-Charge’s system by powering an electric train, the company’s CMO, Yuval Boger, believes that charging such smart home devices as smart locks is the system’s most effective application.

The first Wi-Charge-enabled products are due out early next year, which means that the company will beat everyone else to the air power market. These devices are likely to include light fixtures, Qi wireless charging pads, shelf transmitters and smartphone cases. The company claims to have been contacted by 2,500 potential customers and is working to install Wi-Charge transmitters in restaurants, coffee shops and other public haunts.

Wi-Charge has more powerful transmitters marked on its road map. There’s only one giant fly in the ointment: Wi-Charge’s IR technology operates via line-of-sight, which, again, means that the system can’t charge devices that are in your pocket or around corners. While Wi-Charge might be the first company to hit the market, IR charging might eventually be a stumbling block for widespread consumer adoption, no matter its advantages. Line of sight demands an extra level of attention to transmitter and device location that consumers may decide just isn’t convenient enough, especially in comparison to less restrictive RF air power solutions. 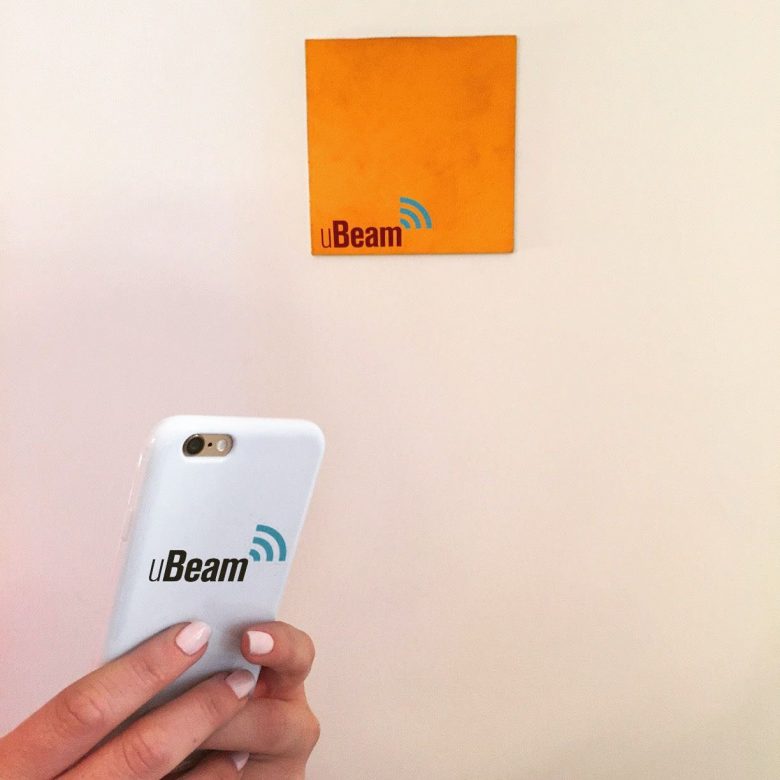 There are numerous allegations that uBeam’s wireless charging technology is a sham. The company conducted some limited live demos last year and earlier this year, but these only raised new questions about the veracity of its claims and the practicality of its technology. For one thing, it seems that ultrasound is absorbed by air, which means that uBeam customers could suffer extreme power loss. Like IR, ultrasound technology is also hampered by line of sight issues. There’s been no public word from uBeam since a May blog post that makes several questionable claims about its tech’s competitiveness. Even if uBeam tech works as advertised, which many experts question, it doesn’t look as if it will make any kind of impact in the short term.

The future of air power 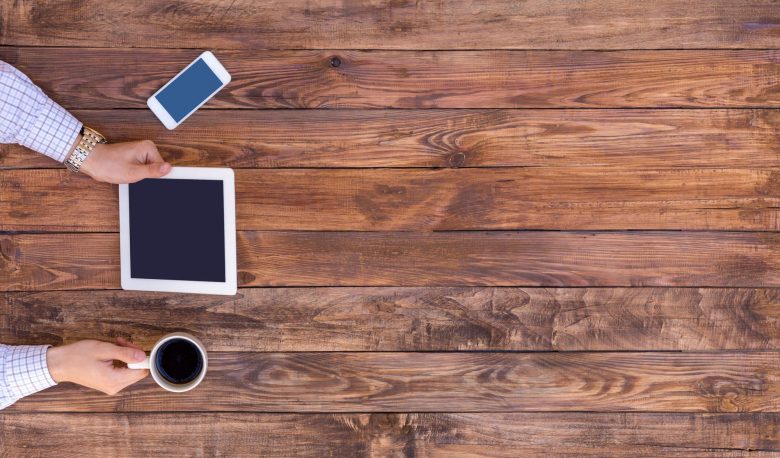 Given the half-decade battle between PowerMat and Qi — which stalled widespread adoption of wireless charging — it’s clear that an air power format war helps no one.

“Growing the pie is in everyone’s interest,” said Gupta, “rather than fragmentation and everyone playing in their own sandbox. If some company decides that it is in their interest to go do something, often they’re on an island. A unified standard is absolutely the more desirable option.”

Since some sort of incompatibility competition is likely, we’re facing one of four potential air power scenarios:

Whatever happens, the air power revolution will soon begin. Who ends up winning and when we’ll be able to dump our chargers is anyone’s guess, but this air-powered future is inevitable. 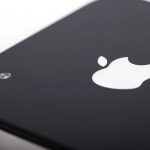 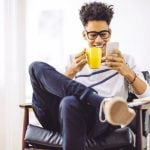 Next Story:
26 free tools that will make your life easier

About the Author / Stewart Wolpin