The year 1976 was great for people who love cars. It was the heyday of the muscle car, and the concept of the “supercar” – basically a high-performance luxury sports car – was going mainstream. Even James Bond was getting into the act, driving the 1976 Lotus Esprit in The Spy Who Loved Me. It was a rare treat to see an icon driving an icon.

It sounds clichéd, but as you look through these 12 cars from 1976, we think you’ll agree with us that they don’t make ‘em like they used to. Cars today may be safer and able to do things that their 45-year-old counterparts couldn’t, but when it came to sheer style, these cars all have a unique look and sense of style that today’s cars simply don’t have.

The Laguna was manufactured for the 1973-1976 model years, and it wasn’t until the 1974 model year that the manufacturer decided to emphasize the car’s performance capabilities. Collectors should be aware that this car was manufactured in limited numbers, so if you buy one of these babies and need a part, good luck finding it.

The Dodge Aspen was a compact car made from 1976 through 1980. During that period, car manufacturers in general were making cars that were smaller, lighter, and had better fuel economy, and the Aspen was no exception.

It was named Car of the Year by Motor Trend, but that didn’t stop it from being the subject of multiple recalls, for “premature rust, ignition issues, [and] abysmal quality control,” according to Hemmings Motor News.

Ferrari’s 400 series was introduced at the 1976 Paris Salon, which marked the first time that an automatic transmission was available on a car produced by the Italian auto maker. The car was intended to be an upgrade from the 365 GT4 2+2, and among the changes were a modified interior, a lip on the front spoiler, and a double circular tail light instead of a triple.

Please pardon the appearance of this 1976 Honda Accord, which has clearly seen some miles in its day. It may seem a little strange to include this model on a list of cool cars, since they’ve been ubiquitous on American highways for decades, so heads don’t necessarily turn when one drives by on the highway.

Having said that, its compact size and great fuel economy went a long way when this was a new model, to the extent that Car and Driver wondered why other manufacturers of small American cars even bothered. So, while the look and details of this car may have changed over the years, the fact that they’re still making them today speaks for itself.

The Lamborghini Silhouette was introduced at the 1976 Geneva Motor Show, and it had lots of neat features, such as a roof that could be removed and stowed behind the rear seats – not quite a convertible, but the effect was the same.

The car’s structure, which was based on the older Urraco model, had to be changed significantly to make room for the roof, as well as for the very wide tires that the car used. Ultimately, only about 50 units were made, and the car was eventually upgraded to become the Jalpa.

The Lotus Esprit first appeared on many people’s radars in 1977, when it appeared in the James Bond movie The Spy Who Loved Me. Prior to that, the car most associated with agent 007 was the Aston Martin, but the 1977 movie required Bond to escape from the bad guys by having his car turn into a submarine, and no iconic 1960s model would do. Since the Lotus Esprit looks very much like what people in the 1970s probably imagined cars of the future would look like, it was a natural choice.

According to Hot Rod, the Oldsmobile 442 is a classic muscle car that “you need to buy now,” and we’re not about to argue with them. Its Radial Tuned Suspension (RTS) was designed by General Motors on a computer, which was unusual for a vehicle of this vintage, and that put it in a category that was far ahead of most cars being manufactured at the time. “Its body-on-frame construction means it’s rock solid,” Hot Rod said in 2013.

There’s no question that the 1976 Plymouth Volaré has that vintage look. That’s the good news. The bad news is that the car was also beset by problems pretty much from the day it first rolled off the assembly line, such as the tendency of the front fender to rust through very, very quickly.

It was such a problem that the parent company, Chrysler, began offering fender replacement warranties to people who owned the car. It was manufactured until 1989, and was among the first to feature a driver’s side air bag.

If you watched the 1970s James Garner police drama The Rockford Files on television, then you know what a Pontiac Firebird looks like. Pontiac had enormous success with this car and manufactured it in one form or another for 35 model years, a nice long run if there ever was one. The 1976 version was a part of the Firebird’s second generation, which encompassed the 1970-1981 model years, and was available in Base, Esprit, Formula, and Trans Am models.

Hot Rod described the Ventura as “one of those cars nobody remembers until they see one on the road,” which can be interpreted either as a backhanded compliment or a testament to its iconic design. It has special appeal to hobbyists who like working on their cars and customizing them, since parts are still readily available. It also has great appeal to collectors, because of its high ranking on what Hot Rod calls “the coolness meter.”

The Porsche 934 was designed and built specifically for Group 4 GT sports car racing, and manufactured from the 1976 through 1988 model years. It’s a two-door coupe that was the first car Porsche manufactured with a front-engine rear-wheel drive configuration, and it was also the first with a fully automatic transmission.

Approximately 150,000 of them were made during its entire production run. According to Porsche, the 924’s liquid-cooled front engine was the first of its kind for the company.

The Renault 5 was produced during the 1972 through 1996 model years. It was a high-performance hatchback, better known to some as a “hot hatch,” and its possible status as the first-ever hot hatch car is hotly debated. It was launched shortly before the Golf GTi, another car that some believe was the first hot hatch, and the controversy has raged for years.

We may never know the answer to this conundrum, but perhaps it’s better not to dwell on the past, and focus on the future instead, since Renault announced in early 2021 that it would be bringing the car back, with a new look and environmentally-friendly electric capabilities. 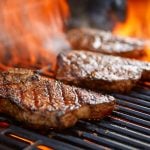 Previous Story:
How to grill the perfect steak
Next Story:
Global delicacies you’re probably too afraid to eat