When you think of the Catskills, do you picture the bygone resorts depicted in the hit TV show Marvelous Mrs. Maisel? There’s so much more to this region than the Borscht Belt resorts of yesteryear. Located less than 100 miles from New York City, this fresh-air, back-to-nature escape balances wilderness adventures and the comforts of civilization, making it a Lonely Planet Top 10 Region to Visit in the World.

Explore protected lands like Catskill Park, a state-designated Forever Wild area, and retreat to hip, modern accommodations and local farm-to-table restaurants. Until you can travel to the Catskills, lose yourself in stunning pictures of the places that drew centuries of artists, authors and adventurers. 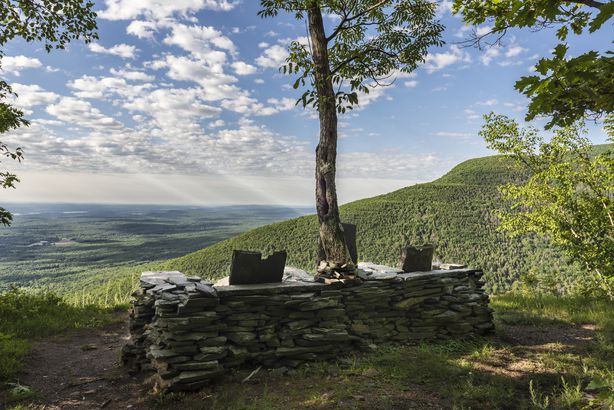 The Catskills region has 30 mountain peaks and six rivers across four New York counties. Explore charming towns across Delaware, Greene, Sullivan and Ulster Counties. Whether you’re off on an adventure or spend time doing nothing, enjoy breathtaking Catskills views. 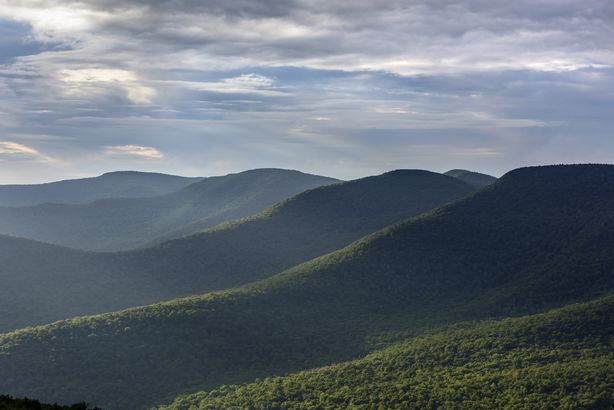 Home to the Catskill Mountains, the 600,000 acre Catskill Park and the Catskill Forest Preserve, this beautiful region has been drawing people for hundreds of years. And, thanks to public land protections, many of the vistas look the same as they did centuries ago. 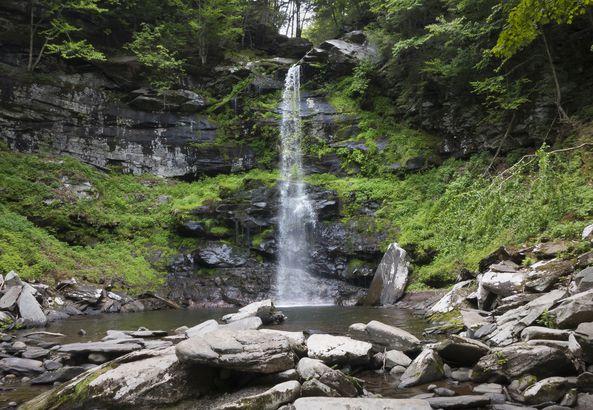 17th century Dutch and English immigrants moved to this portion of New York State to set up farms. Translating roughly to Cat Creek in Dutch, it’s not clear exactly how the region got its English name. Many believe it got its name from the mountain lions often spotted in the creeks by settlers. 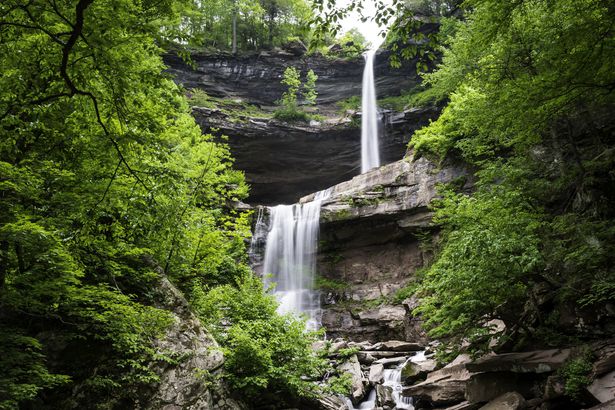 Over the centuries, confusion around the name has led to multiple spellings of The Catskills, still present in hotels and landmarks like the famous Kaaterskills Falls, the tallest waterfall in New York State. 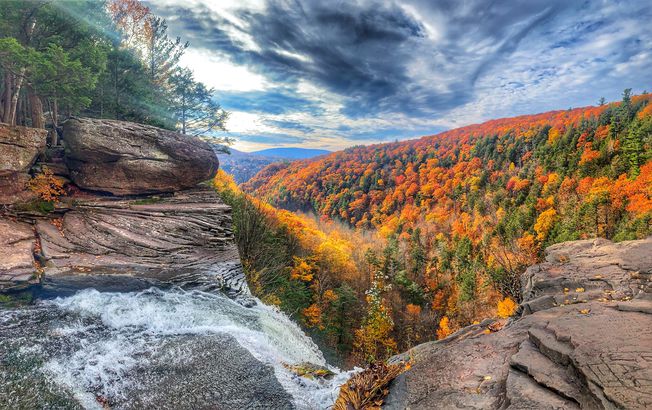 Waterfalls acted as our country’s first tourist attractions, and Kaaterskills Falls, famously depicted in paintings, poems and stories, has been drawing people for centuries. Over 100,000 people a year still visit Kaaterskills Falls, and thanks to a new flat paved trail and viewing platform, this top of the falls view is accessible for people of all abilities. 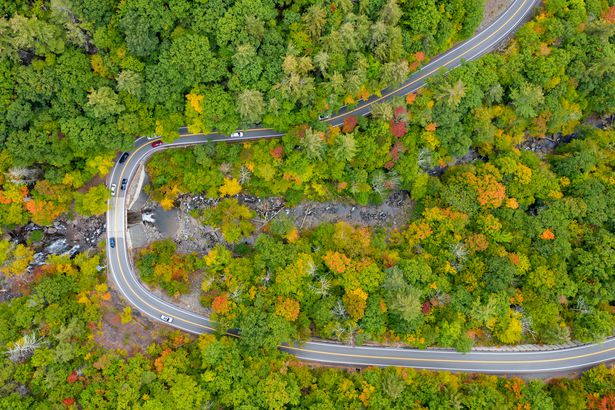 Before New York built the new flat upper falls trail, most Catskills visitors braved parking and walking along narrow winding roads to hike up to Kaaterskills Falls. While it’s not a long hike, it is a strenuous half-mile of steep, often slippery stairs. 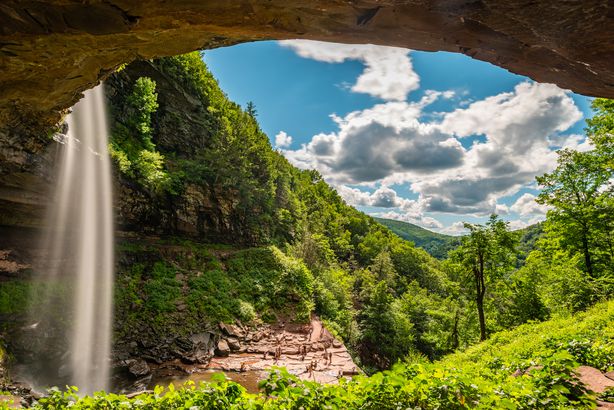 Whether you hike up or hike down from the new viewing platform, make sure to stop midway for the rewarding view of this 260-foot waterfall. Art fans might recognize this vista as the subject of the most famous painting of Thomas Cole, the founder of the Hudson River Art School 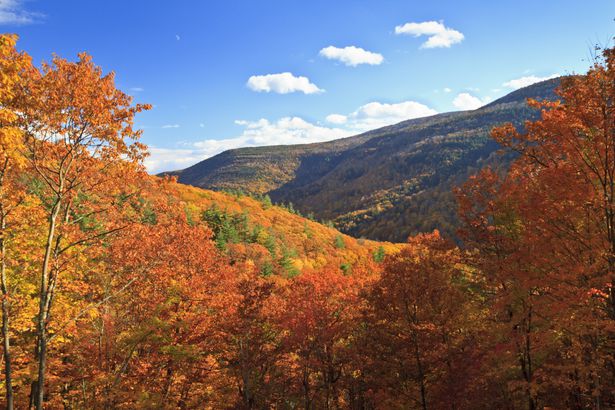 During the early 19th century, these vistas and mountain views inspired a new kind of American art created by the Hudson River School of painters. Today, travelers can step into their pieces by visiting the exact painting locations on their Art Trail, including Kaaterskill Clove pictured here. 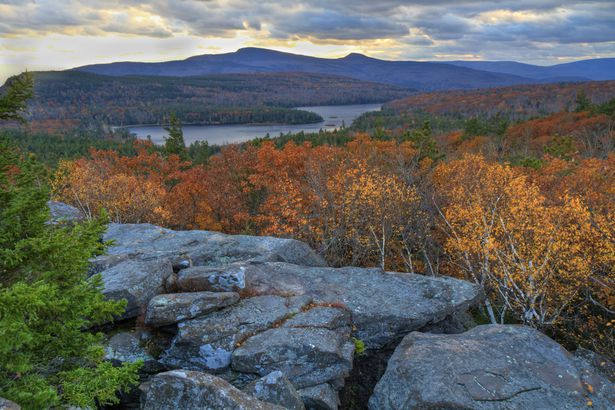 Hikers can also enjoy the Shawangunk Ridge Trail in the Shawangunk Mountains. The Gunks, as they are known,  go throughout the Catskills Mountains all the way down to the Northernmost point of New Jersey. 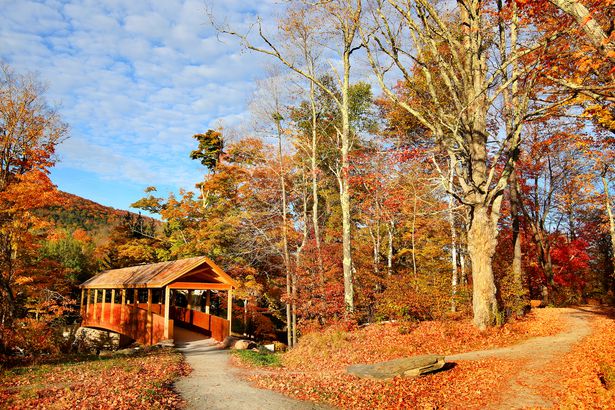 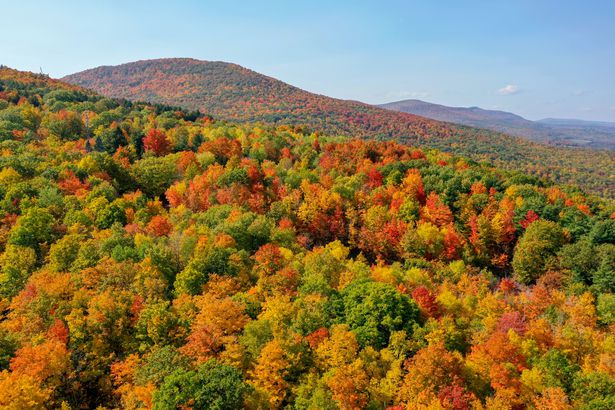 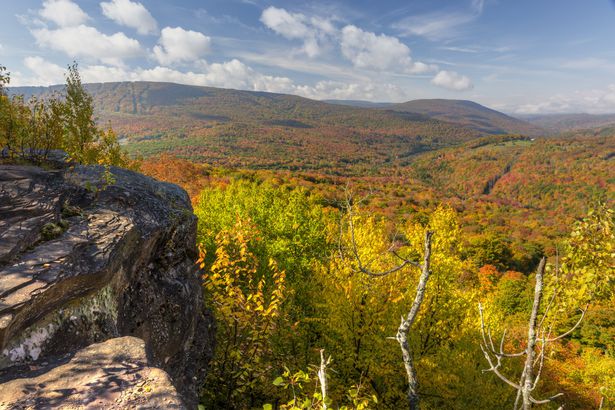 While most know Belleayre Mountain as another Catskills skiing spot, it’s also beautiful in the fall. Hike to this ledge on Monka Hill during the day and bring your appetite to nearby Peekamoose at night. One of the innovative farm-to-table restaurants in the region, it was founded by chefs from Manhattan’s Michelin star restaurants and graduates of the nearby Culinary Institute of America. 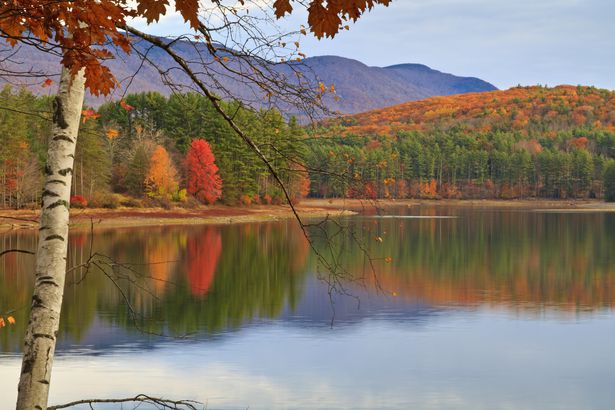 The largest natural lake in the Catskills, Cooper Lake is a popular spot for quiet, uncrowded walks and picnics. Both kid and dog-friendly, it’s also a stunning spot for family photos.

Folklore says that through this rugged mountain pass clove is the Devil’s Tombstone. Within New York State’s oldest campground lies a six-foot-wide and seven-foot-tall sandstone boulder. In the 1860s, it became known as the Devil’s final resting place. The State of New York Environmental Conservation Department has placed an official plaque on the stone to mark the region’s long history of Devil-related folklore. Come see for yourself what the late afternoon light illuminates on the rock. 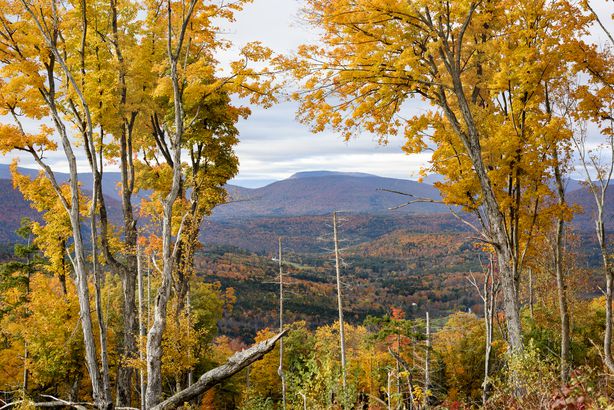 16. Fall in Love with the Foliage

After the water parks close, but before the snowmaking begins, the Catskills is bustling with Oktoberfests, motorcycle rallies, farm tours, as well as pumpkin and apple picking. If you miss the fall fun, grab apple cider donuts for the ride home, available year-round at The Catskill Mountain Country Store’s two locations. 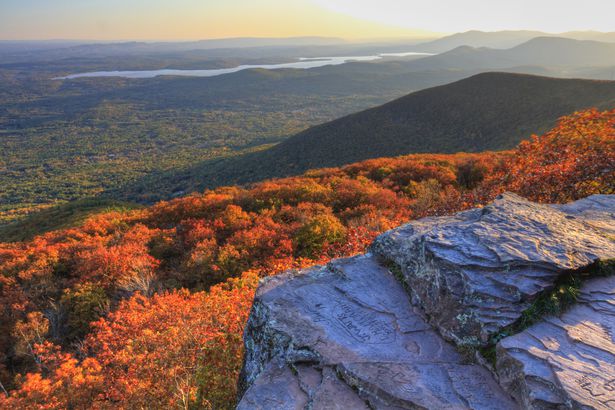 From the top of Overlook Mountain, Ashokan Reservoir in the eastern portion of Catskill Park can be seen in the distance. Created by relocating eleven villages and its residents, this reservoir still supplies 40% of New York City’s water. 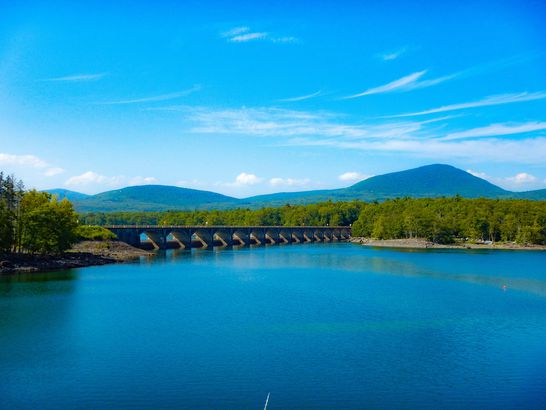 The South Shore of the reservoir offers a paved, flat 2.8-mile trail with fantastic Catskill views. So whether you’re a walker, runner, biker or pushing a baby in a stroller, make your way to the Ashokan Fountain, which doubles as a misting station on a hot summer day. 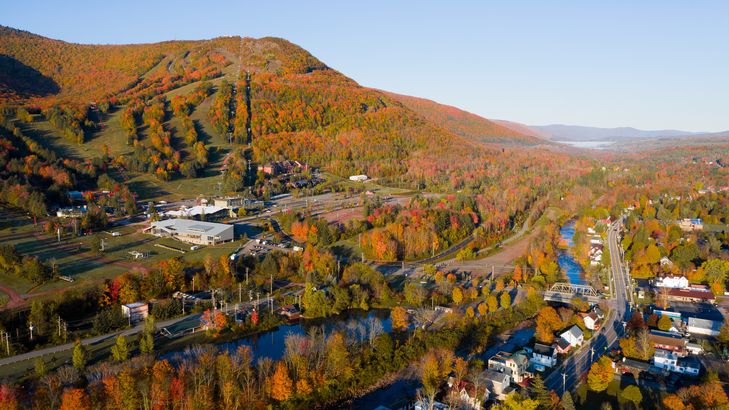 While skiers and snowboarders have been flying down Hunter Mountain’s slopes since 1960, it’s also the home of the highest, fastest, and longest zipline in the country. Home to music, beer, and wine festivals, this not so little mountain near Tannersville draws people to the Catskills year-round. 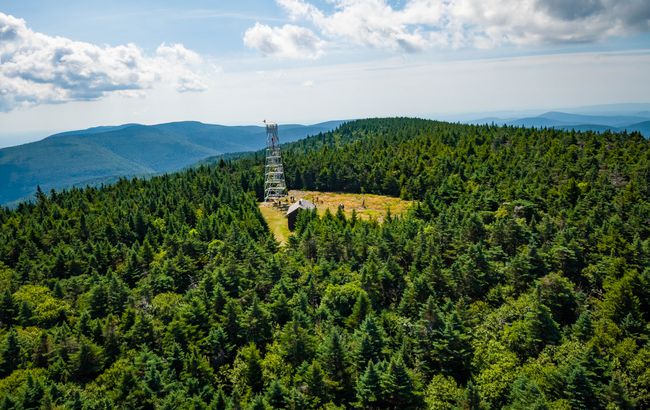 Starting in 1908, fire towers were built in the Catskills to spot and control forest fires. The Hunter Mountain Fire Tower was the first built, the last one in service, and one of only five still standing today. Added to the National Register of Historic Places, it was renovated through community fundraising and is now a popular attraction for hikers seeking panoramic views. 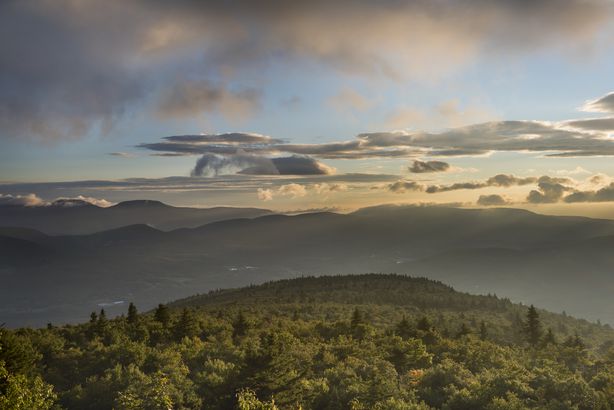 Neighboring Hunter Mountain is Plateau Mountain which offers stunning views of the Blackhead mountain range. However, don’t set off to hike it on Devil’s Path without preparation. It’s a five-hour challenging hike but comes with serious bragging rights. 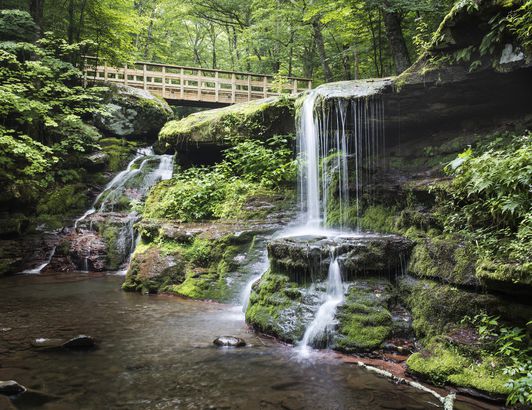 West Kill Falls, also known as Diamond Notch Falls, is a remote waterfall near the Hunter Mountain Hiking Trail. Located beneath a bridge, it’s a serene hiking and waterfall option for those who prefer to leave the crowds behind. 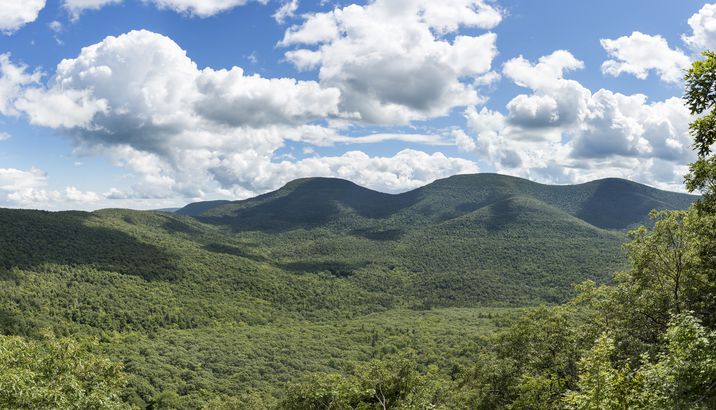 The comb-like mountain ridges are not only distinctively Catskills but can be seen as far north as Albany, New York. Blackhead Mountain, pictured, is one of five peaks in the range but the only one that can’t be climbed on the popular Black Dome Range Trail. 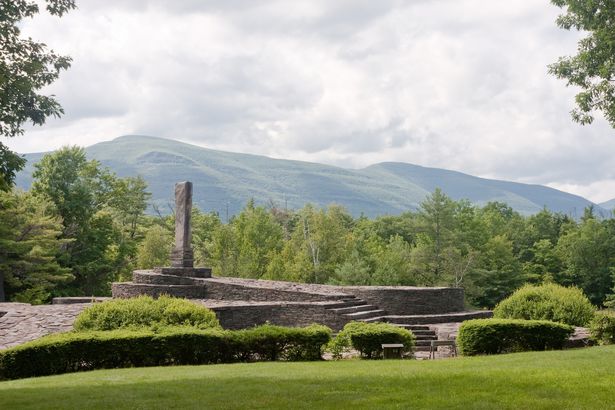 Not far off a popular Catskills highway exit is Opus 40, considered to be the Stonehenge of North America. The life’s work of sculptor Harvey Fite is now a sprawling sculpture park covering six acres of a bluestone quarry. Using the leftover, discarded stones, he built by hand stunning terraces, ramps and walkways just as beautiful as the large-scale art pieces. 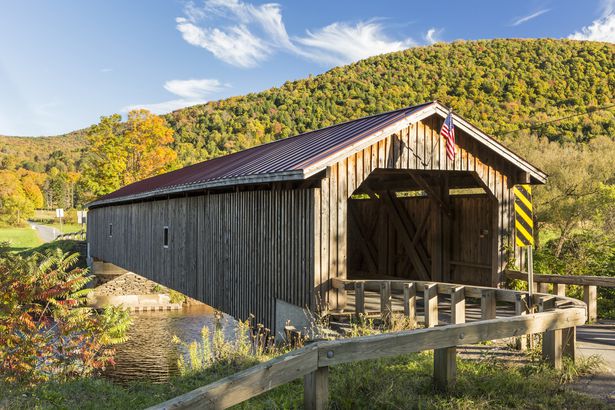 25. Getaway to the Mountains

The next time you plan a road trip, getaway or family trip, don’t overlook mountain regions and towns. From romantic escapes, family-fun, thrilling adventures or serene places to relax, they offer something for everyone.

Previous Story:
The No. 1 trick to buying a car if you live in the Southwest
Next Story:
Here’s how to score the best deals on timeshare rentals

About the Author / Monica Fish