Many Americans are increasingly fearful that the economy is approaching a recession. For many, that means it’s time to start saving again. The latest MagnifyMoney Savings Index indicates that 42% of consumers saved money in July, up from this year’s 35% low in June.

MagnifyMoney surveys more than 1,000 Americans each month for its Saving Index. Keep reading to learn more about how consumer saving trends are shifting, including who’s most likely to save and why they’re doing it.

Savings are rebounding, but it’s still a summer slump

Consumers may be bouncing back from this year’s savings low. In total, 42% added to their savings in July, up from 35% in June — the lowest rate in 2022. While that’s a good sign, there are still fewer summer savers than their springtime counterparts. In fact, July had the second-lowest percentage of savers this year so far, down from a high of 47% in March. 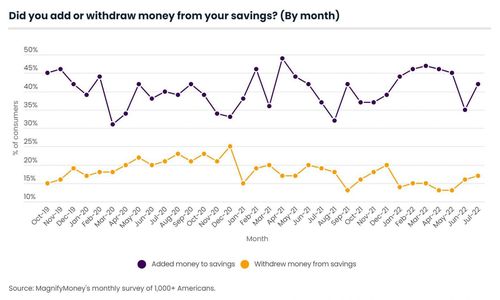 Consumers’ savings aren’t necessarily going untouched, though. In fact, 17% of Americans say they pulled funds from savings, making July the month with the highest percentage of savings withdrawals so far in 2022. Consumers withdrew at lower rates in the springtime. During April and May — the 2022 months currently tied for the lowest percentage of withdrawals — just 13% of consumers took money from their savings.

Although there’s reason for caution, it’s worth noting that a higher rate of Americans saved money this July compared to the past two years. Just 37% saved money and 19% pulled from their savings in July 2021. Meanwhile, 40% saved money and 21% withdrew from their savings in July 2020. That indicates consumers generally have an easier time saving right now, according to DepositAccounts founder Ken Tumin, but that may change as consumers continue to feel the effects of inflation.

“Many consumers have been able to build up some savings, and now they’re focused on spending some of it rather than adding to it,” Tumin says. “If we don’t see a pullback in inflation soon, many consumers may feel forced to pull all or most of their money from savings to pay for more costly goods and services.”

The youngest age groups are particularly keen to grow their savings. Gen Zers ages 18 to 25 were more likely to add money to savings in July than any other demographic. Of this age group, just over 6 in 10 (61%) put money towards savings. That compares with:

Meanwhile, a higher percentage of men (49%) put money toward their savings than women (35%). Residents of the Northeast (46%) saved more money than any other region, followed closely by Westerners (45%). That compares with 40% of Southerners and 38% of Midwesterners.

Parents were saving too, but those with younger children withdrew at higher rates than parents with adult children and those without kids. While just over 4 in 10 (42%) parents with children younger than 18 saved money, 20% withdrew money. That stacks up against:

With recession fears rising, more consumers are saving for emergencies

Nearly a third (31%) of Americans say they’re saving for an emergency, up from 25% in July 2021. Fears of an impending recession are likely driving many of these consumers. In fact, a recent MagnifyMoney survey on consumers’ recession beliefs found that 70% of Americans believe a recession is coming. Of these, a majority expect a recession in the next six months. Notably, 26% said they were building their emergency savings to prepare for it.

It’s good that so many Americans are building up their emergency funds, Tumin says, but consumers should ensure they’re contributing enough money with inflation on the rise.

“A job loss becomes more likely in a recession, and an emergency fund is especially important when you lose your job,” Tumin says. “A consumer’s emergency fund should afford them a few months’ worth of expenses. With high inflation raising expenses, consumers need to add more money to ensure their emergency savings are properly funded.” 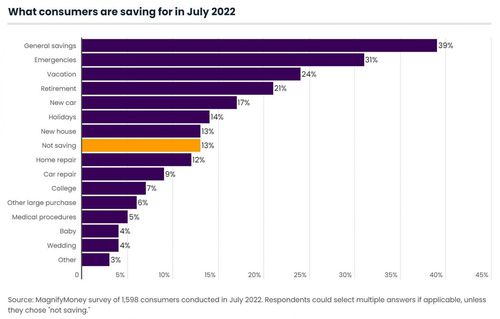 Every month, MagnifyMoney surveys consumers to find out whether they added money to their savings — and what they’re saving for. The results comprise the monthly MagnifyMoney Savings Index, which began in October 2019.

For the July 2022 edition, MagnifyMoney commissioned Qualtrics to conduct an online survey of 1,598 U.S. consumers ages 18 to 76 from July 8 to 15, 2022. The survey was administered using a nonprobability-based sample, and quotas were used to ensure the sample base represented the overall population. All responses were reviewed by researchers for quality control.

This article originally appeared on Magnifymoney.com and was syndicated by MediaFeed.org

Is inflation ever a good thing for consumers?

Previous Story:
World’s highest grossing retailers (no, Amazon isn’t at the top)
Next Story:
15 horrible money moves & how to overcome them

About the Author / Maggie Davis