As the prospects of stricter gun laws appear dim in the U.S., Canada looks set to tighten their rules following the gun massacres in Buffalo, New York, Uvalde, Texas, and Tulsa, Oklahoma, over the past three weeks. But does this reflect a difference of public opinion in the two countries? According to Canada’s largest market researcher, Leger, the disparity is not as large as it might appear. 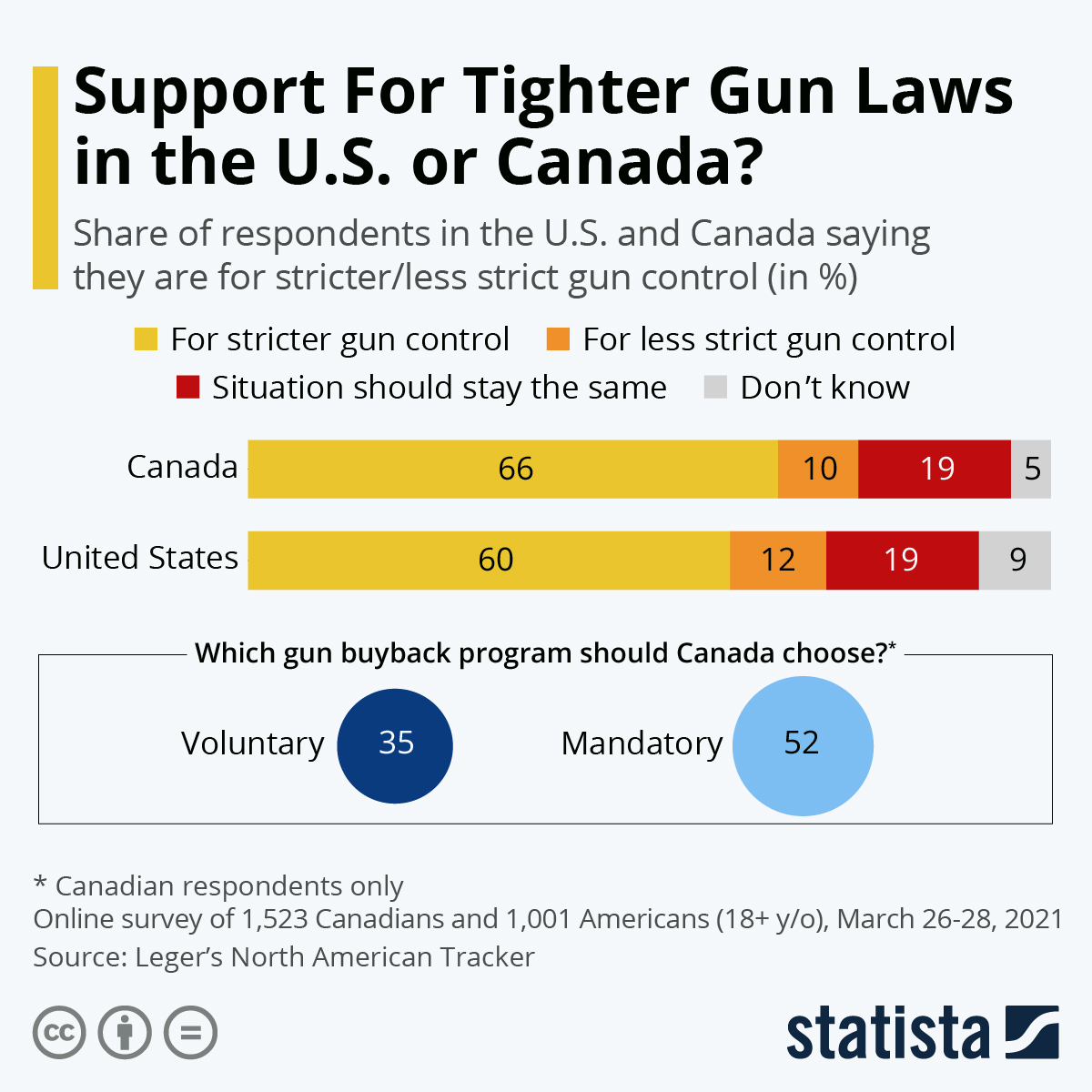 U.S. Congress is currently discussing action on gun control, including expanding background checks and introducing so-called “red flag” laws that would make it possible to take guns away from people deemed unfit to handle them. Speaker of the House Nancy Pelosi (D-Calif.) also said Wednesday that a push to renew the assault weapons ban would follow. Due to the Democrats’ shaky majority in Congress, however, the future of any such initiative is unclear even in the House.

Canadian lawmakers, meanwhile, are expected to be successful in introducing new legislation on guns that would lead to a national freeze of handgun sales and also would empower courts to temporarily take away guns from those believed to be posing a danger to themselves or others. According to The Washington Post, the country’s government is also planning to implement a mandatory buyback program for owners of firearms that have been banned in Canada previously, for example assault-style rifles.

According to Leger, 52 percent of Canadians believe they should be handed back to the government, while only 35 percent said owners should get to decide. The Canadian ban on assault weapons came into effect in 2020 after the country’s deadliest mass shooting, when 22 died in Nova Scotia.

Aside from Canadian Prime Minister Justin Trudeau’s stronger majority, a key reason for the expected diverging outcomes lies in the difference in political systems. Even if the Democratic party line would hold on gun control, the U.S. Democrats would then be up against the filibuster in the Senate.

This is not a problem for Canadian leadership, as the parliament’s upper house there is considered the non-dominant chamber whose appointed members rarely reject legislation.

While both countries are not true representative democracies, giving out parliamentary seats on a winner-takes-all basis, the U.S. Senate represents a more extreme example of checks and balances over representation by assigning each state two seats despite their widely different populations ranging from less than 600,000 (Wyoming) to 39.6 million (California).

Since less densely populated states are more often rural and Red, Senate Republicans have been representative of a majority of the U.S. population for only two years since 1980, despite controlling the Senate for more than 22 out of the years in question.

Previous Story:
Inflation eating away at your retirement savings? Try this strategy
Next Story:
49 ways to make extra cash ASAP