Best of the worst: The history of bad TV in 10 shows 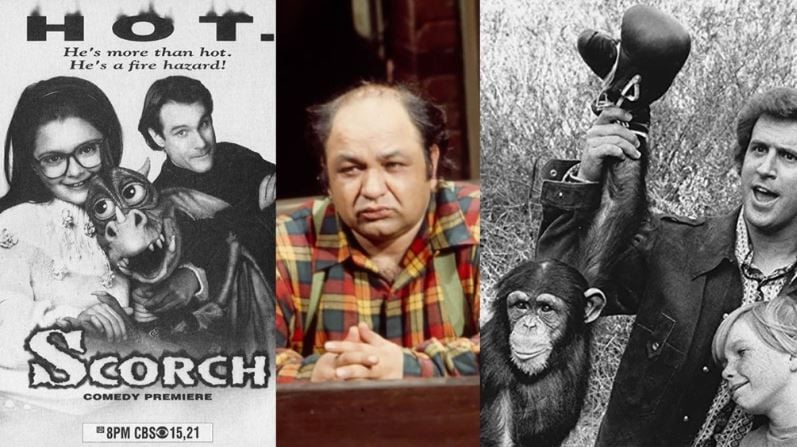 A flying nun, a talking car, tone deaf cops, a man turned animal, and those singing and dancing Bradys. These fiascos — The Flying Nun, My Mother the Car, Cop Rock, Manimal and that first Brady Bunch spin-off — have rightly earned their reputations as some of the most idiotic shows in the history of television.

Then there was the sketch comedy Turn-On that was turned off in the middle of the first episode. And, let’s face it, beloved Gilligan’s Island was not so brilliant either. But there are many more awful series worth remembering. My goal is to enlighten you (or make you scratch your head in wonder) with a sampling of 10 other really bizarre — or just plain bad — TV shows.

Here are my findings, ranked by date. Please chime in with your picks on the Considerable Facebook page. 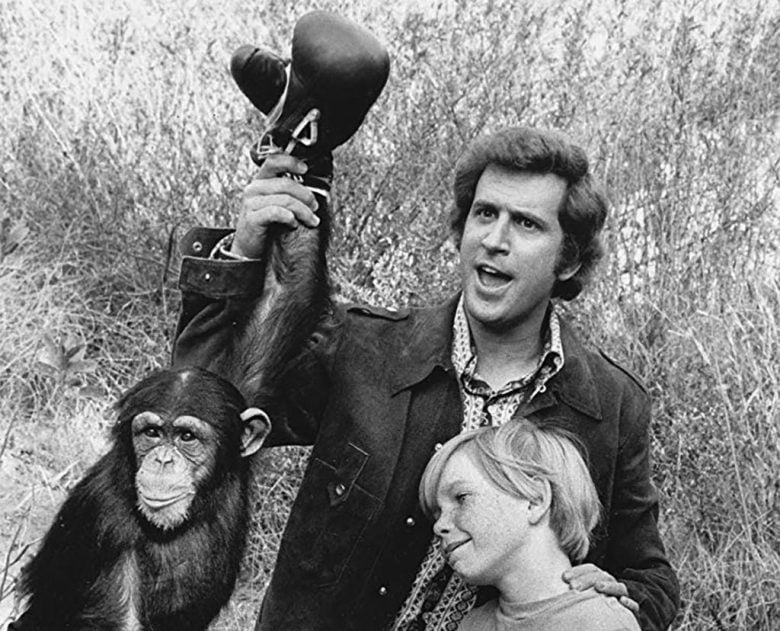 The season before she landed on fictional Waltons mountain smack in the middle of the Depression on family drama The Waltons, little Kami Cotler was monkeying around with a chimp named Buttons on sitcom Me and the Chimp.

Buttons, you see, was a washout from a space program that found a home with the Reynolds family (including former That Girl star Ted Bessell). And it was constant chaos thanks to that cute-as-a-button Buttons, mixed with a laugh track that made you wonder who the heck would even laugh at this.

Ted Bessell was featured in two additional short-lived sitcoms after Me and the Chimp: NBC’s Good Time Harry in 1980 and Hail to the Chief on ABC in 1985. Both lasted for just seven episodes.

How to Watch Me and the Chimp today: one episode is available on YouTube 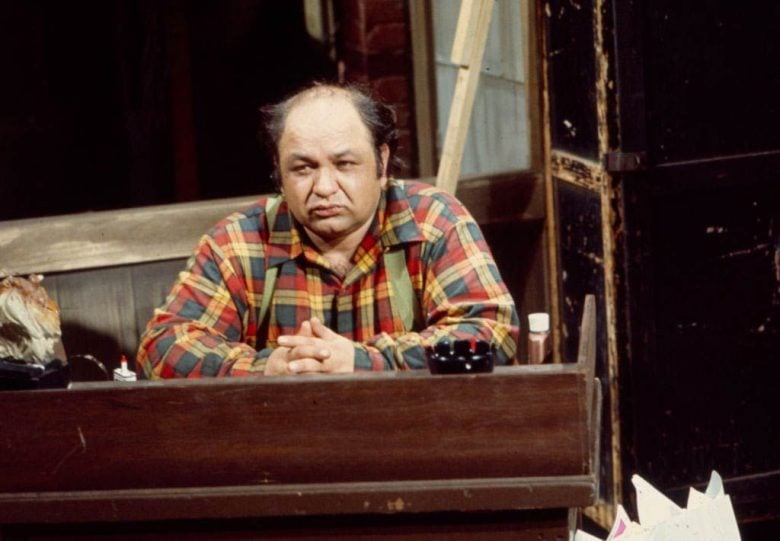 Three years before we met Pat Harrington, Jr. as beloved Dwayne Schneider on the original One Day at a Time, the role of a building superintendent came in the form of an overweight, sluggish, nasty man named Joe Girelli (Richard Castellano) in failed ABC comedy The Super.

The location was a lower-class neighborhood in New York City, the tenants were of mixed ethnic backgrounds, Joe’s children had no respect for dear old Dad, and the jokes were an endless barrage of racially themed banter about anything — and everything — objectionable. Let it be a lesson: you should never show your main character removing dog poo from his shoe in the opening credits.

How to Watch The Super today: not available 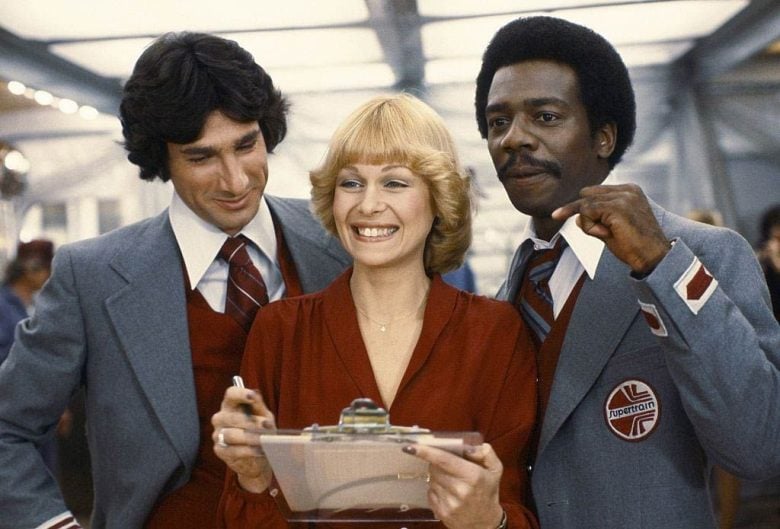 I admit it. I have seen most of the episodes of The Love Boat, which for a teenager in the 1970s meant I didn’t have a date on Saturday. Gulp! But, let me boldly proclaim I did not see all the installments of Supertrain, which was its clone on wheels. Then again, Supertrain only lasted for nine episodes.

Set on a nuclear-powered bullet train of the future equipped with all the luxuries of a cruise ship (including a swimming pool!), guest stars like Steve Lawrence, Vicki Lawrence, Larry Linville and Rue McClanahan would board this train troubled with some nonsense and miraculously exit without a care in the world.

While Alan Alda was a “S*M*A*S*H at the time on CBS, his poor father Robert was featured here as a doctor named Dan Lewis (along with Edward Andrews and Harrison Page). And, midway through its abysmal season came a retooling with Ilene Graff (pre-Mr. Belvedere) as the social director. If only the Long Island Railroad would hire a social director maybe every trip would not be pure hell.

Supertain was the replacement in the Wednesday 8 p.m. hour for a short-lived variety hour called Dick Clark’s Live Wednesday.

How to Watch Supertrain today: not available 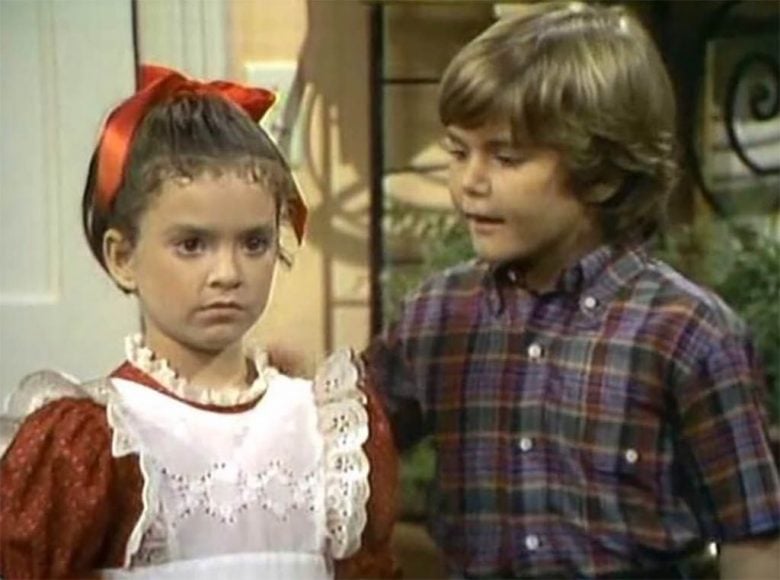 Most TV show fiascos do not last for four seasons. But for 96 goofy episodes, the focus was on “Vicki,” an android in the shape of a 10-year-old girl built by Ted Lawson (Dick Christie), an engineer/inventor for United Robotronics who brings Vicki (Tiffany Brissette) home to mature within a family environment.

There she meets 10-year old son Jamie (Jerry Supiran) and little redheaded Harriet Brindle (Emily Schulman), the nosy neighbors’ obnoxious daughter who has a crush on Jamie. Every time Harriet appeared the producers had to crank up the laugh track (viewers weren’t buying it).

Before she headed to ABC’s Full House as D.J. Tanner, Candace Bure auditioned for the role of Vicki on Small Wonder. Heather O’Rourke, known from theatrical Poltergeist, also auditioned. Tragically, she died at age 12 in February 1988. 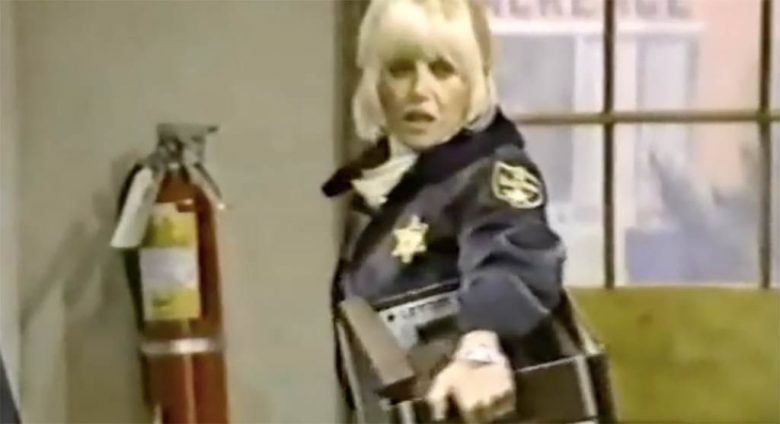 Six years after being axed from Three’s Company, Suzanne Somers made her sitcom comeback as Hildy Granger, a young wife suddenly widowed living near Lake Tahoe with two children to support.

The premise of Hildy being appointed sheriff, the job held by her husband until his untimely death, was as believable as cutesy Sally Field flying around as Sister Bertrille. After two painful seasons, Somers ultimately moved on to a more successful run as spokesperson for Thighmaster.

How to Watch She’s the Sheriff today: not available 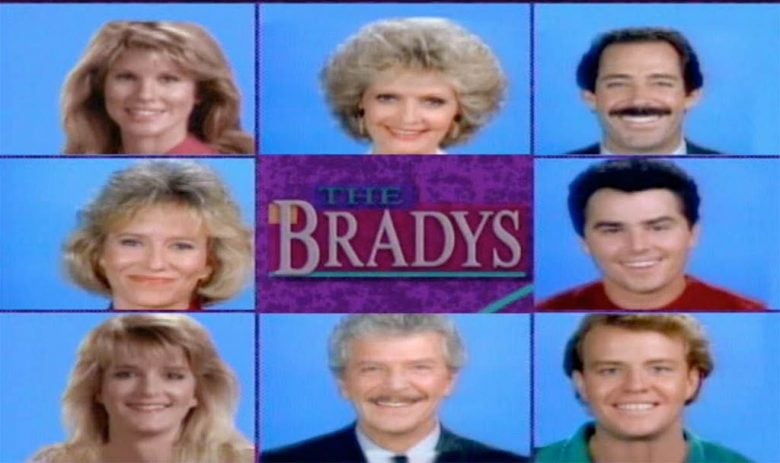 Let’s see if I have this straight. “Fake” Marcia (Leah Ayres) is an alcoholic; Greg (Barry Williams) and Peter (Christopher Knight) have a fistfight dressed as Bavarian waiters at a catering event; Thindy (I mean Cindy – Susan Olsen) is suddenly a morning radio DJ; and Jan (Eve Plumb) is still married to that intellectual dud Philip (Ron Kuhlman). Oh, and Bobby (Mike Lookinland) is paralyzed from the waist down while racing a car, but manages to stand at the end of the griping episode. Praise the writers!

Did I also mention that Ann B. Davis as beloved Alice is still dressed in that blue polyester uniform cooking and cleaning for the Bradys even through she does not work for them anymore? The moral of this story: Maybe earlier spin-offs The Brady Bunch Hour and The Brady Brides were not so bad after all!

How to Watch The Bradys today: possibly DVD 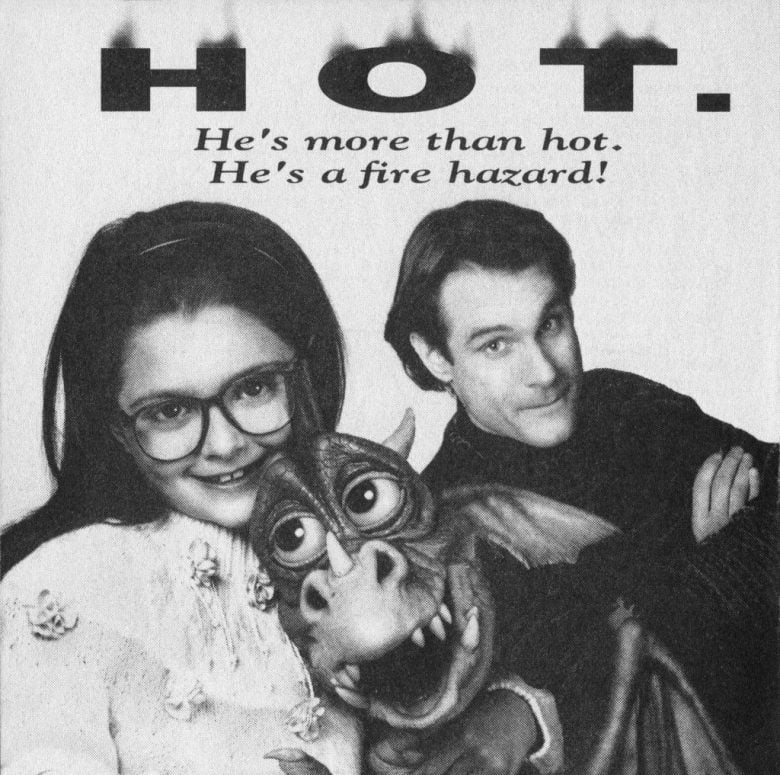 Then home to top 10 shows like Murphy Brown, Designing Woman and Major Dad, CBS decided it was time for a comedy about a 1,300-year-old dragon who is struck by lightning and crash lands in front of the apartment of an unassuming man named Brian Stevens (Jonathan Walker) and his young daughter (Rhea Silver-Smith). No…I do not make this stuff up!

Miraculously, Brian lands a job as a TV weatherman the next day at a Hartford TV station by pretending he is a ventriloquist and Scorch is his puppet. But only Brian and his daughter know that Scorch is a real dragon. After six episodes, Scorch was scorched by the network.

Before he landed his classic recurring role as J. Peterman on Seinfeld, John O’Hurley was featured on this dud.

How to Watch Scorch today: not available 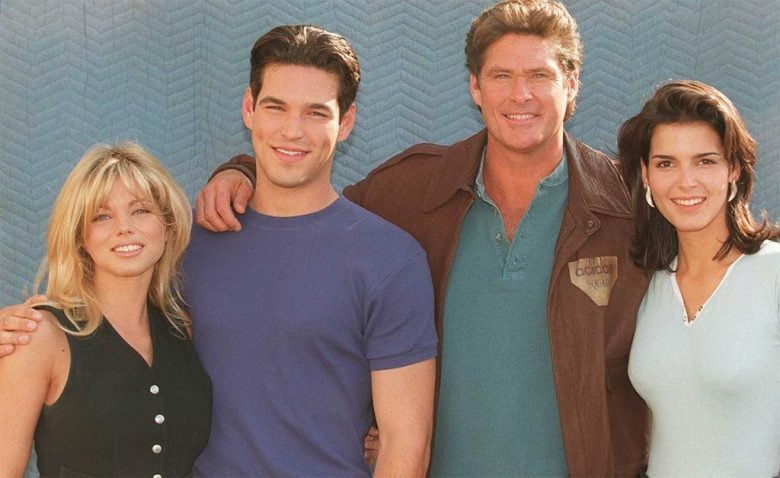 Considering the pedigree of its parent series, Baywatch, no one was expecting much brilliance in the spin-off. But just how did lifeguard extraordinaire Mitch Buchanan (David Hasselhoff) suddenly become a detective? And what the heck was he suddenly doing battling supernatural forces in season two? If the producers were smart, Hasselhoff’s Mitch would have realized it was all a bad dream as he was sitting in KITT on Knight Rider.

David Hasselhoff’s first regularly scheduled TV series was an ABC sitcom in 1980 called Semi-Tough, based on the Burt Reynolds movie of the same name. It was not so tough after all and lasted just four episodes. 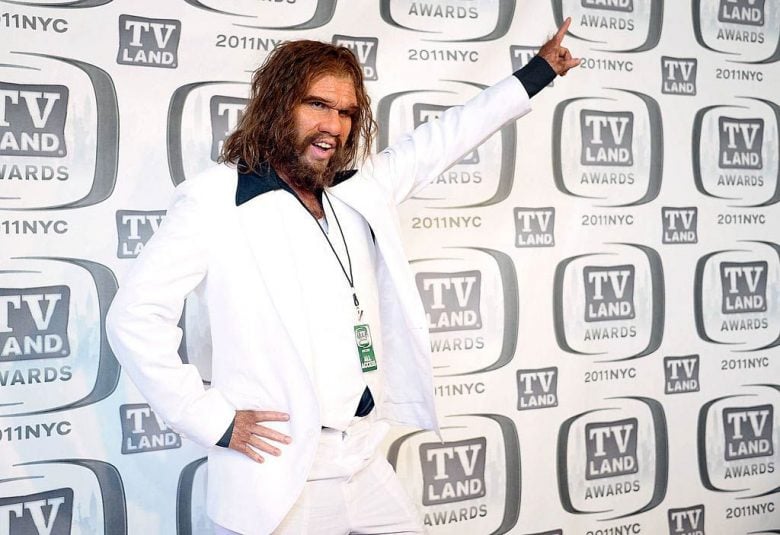 Here’s an idea. Let’s take one of those adorable Geico commercials that works so well in a 30-second format and expand it into a half-hour buddy sitcom about three friends who share a condo. These three wild and crazy single guys who just want to have fun just happen to be…um…cavemen.

Masked with mountains of facial hair that might have been more appropriate for a Planet of the Apes reboot, Cavemen was put out of its misery after seven episodes. And, thankfully, no one ever picked up a comedy about that Taco Bell chihuahua.

Cavemen led into another failed new ABC series called Carpoolers, which told the unfunny tale of four male suburbanites (Fred Goss, Jerry Minor, Tim Peper and Jerry O’Connell) who ride together to and from work.

How to Watch Cavemen today: not available 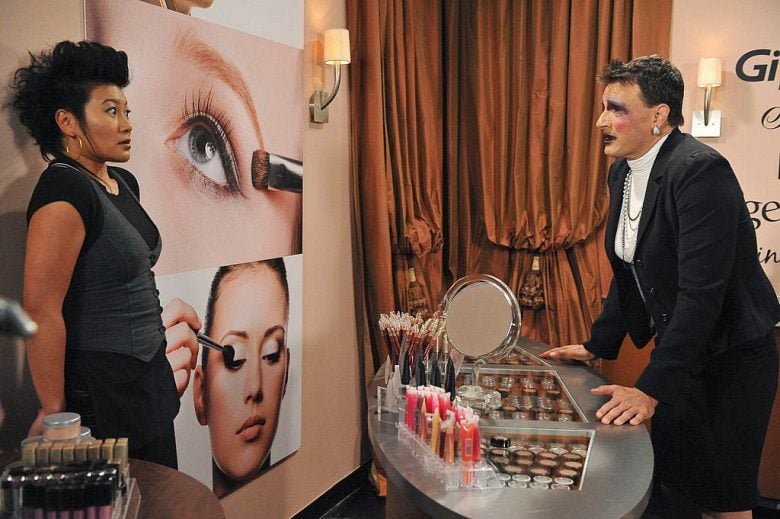 Yes, I know…Bosom Buddies on ABC with Tom Hanks (pre-his two Oscars) and Peter Scolari (pre-Newhart) is a cult favorite. But the comedy was based within the likability of the characters, not the dresses. And that leads me to clone Work It, the tale of two men who dress as women in order to keep a job in a bad economy.

After a unanimous round of horrific reviews, not to mention concerns from LGBTQ groups about how the show trivialized the obstacles faced by transgender people in the workplace, Work It was yanked after just two telecasts. The remaining 11 installments have never aired.

Work It replaced another failed ABC comedy called Man Up!, which revolved around the lives of three modern men who try to get in touch with their inner “tough guys” and redefine what it means to be a “real man.” We’ll save this entry for Bad TV, part 2! 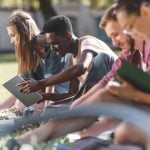 Previous Story:
The most popular bachelor’s degree in every state 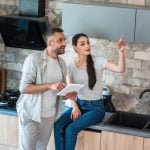 Next Story:
How safe is your smart home? This cybersecurity scorecard has the answer

About the Author / Marc Berman