Do you remember these 15 famous TV & movie cats? 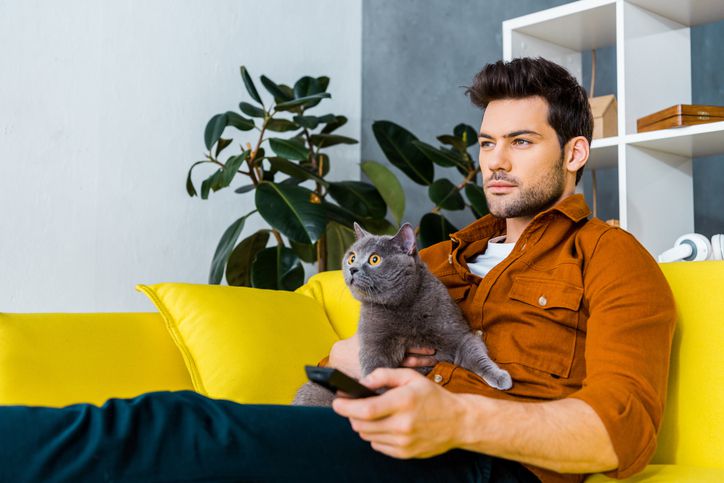 In case you were wondering, cats didn’t just become popular as soon as the Internet was created. Sure the web is infinitely more interesting because of all the cute cat videos and photos available, but trust me, cats were a thing (as were cat ladies and lads) long before AOL was telling people “you’ve got mail.”

And while cats don’t seem to make it into a lot of television shows these days, there are still plenty of our feline friends making appearances in movies. Let’s take a look at 15 of the most famous television and movie cats of all time. 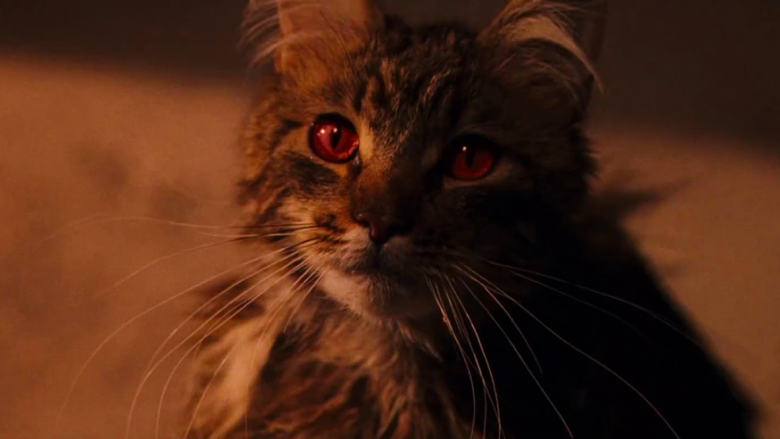 Mrs. Norris is a beautiful Maine Coon cat (or is she?) from the Harry Potter series of films. While she belonged to Hogwarts caretaker, Argus Filch, questions remain whether she was really a cat or an animagus (a wizard who can transform into an animal). According to MaineCoonExpert.com, “The most memorable of all the cats that played Mrs. Norris were three rescued cats; Alanis, Cornilus and Maximus and a retired older cat from a UK breeder, called Pebbles.” 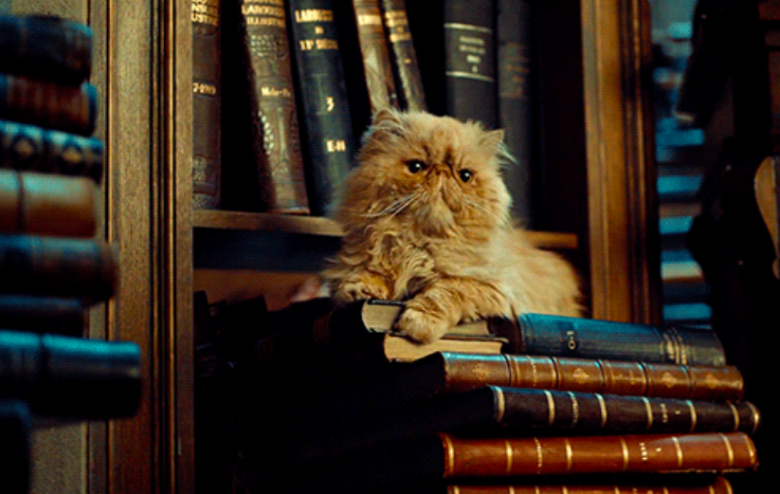 Mrs. Norris wasn’t the only cat in the Harry Potter series. Hermione Granger’s cat, Crookshanks, made several appearances. And like Mrs. Norris, she also is suspected of some magical proclivities. The ginger Persian who played Crookshanks is actually named Pumpkin and apparently was leading quite the lush life back in 2011. It’s unclear if Pumpkin is still with us (she’d be 18 or so by now), but there are no readily found announcements of her death, so that’s good.

3. Jake from The Cat from Outer Space 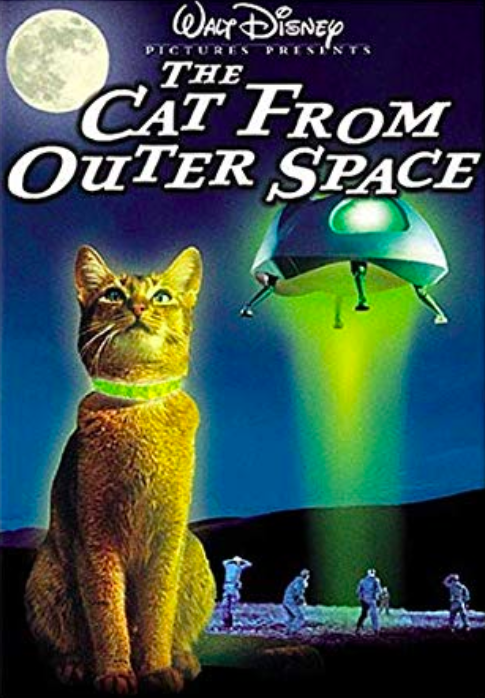 Jake is another cat on our list with special powers, though not particularly magical. He wears a collar that allows him to talk to humans, among other things. This feline pilot of an Unidentified Flying Object was played by brother and sister Abyssinian cats Rumpler and Amber and voiced by actor Ronnie Schell. If you were a kid in the 1970s, chances are you’re familiar with Jake. If not, and you love cats, science fiction and old Walt Disney movies, this is a must-see. 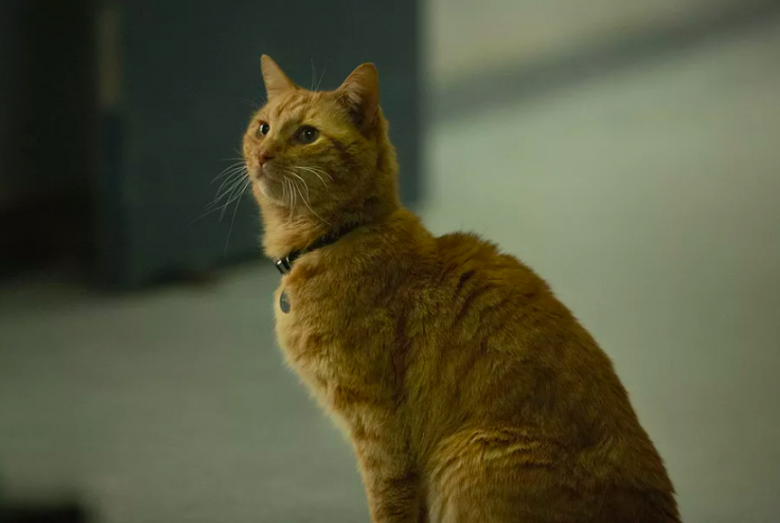 Another alien that looks like a cat? Yep. Goose, from 2019’s Captain Marvel is a Flerken. Unlike cats on Earth, Flerkens can lay eggs and their mouths contain pocket dimensions used to store and hold almost anything. On top of that, they can teleport and can attack with tentacles that come out of their mouths. Goose was played by four different cats named Reggie, Archie, Rizzo and Gonzo. 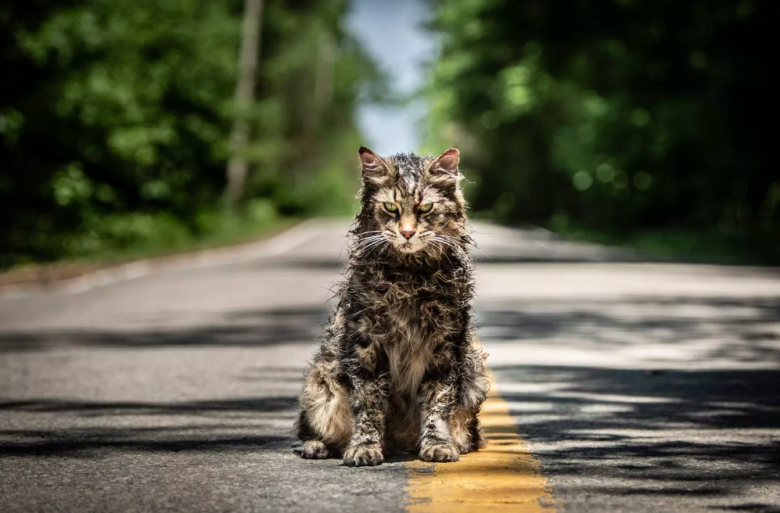 Church definitely has some powers (we’ll leave it at that, no spoilers here), but of a sinister basis, unlike than those of the previous cats on this list. Both the original, 1989 version of this move based on Stephen King’s best-selling novel of the same name, and the 2019 remake are scary AF (in my opinion), but the 2019 film has a sad side story.:

Leo, one of the four cats who played Church in the 2019 remake passed away May 29. Leo was the face of Church in movie posters and other promotional materials. The cause of his death had not been announced at the time of this writing. 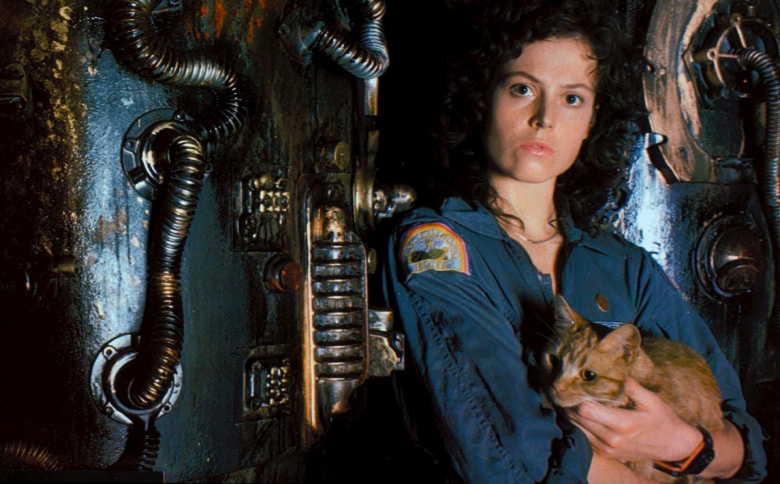 Another scary movie with a cat character is 1979’s Alien, starring Sigourney Weaver (pictured with Jonesy). Four cats were used to play Jonesy, including the one who provides the now-famous hiss scene. According to director Ridley Scott, that hiss was captured placing the cat in front of a screen with a German Shepherd behind it. When the screen was removed, the famous hiss was made. Poor Jonesy. 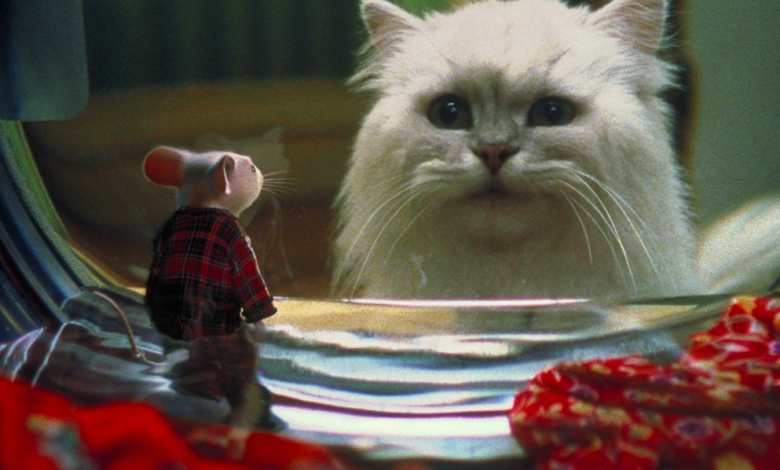 Another cat on the scary list. What? You don’t think a cute and fluffy cat named Snowbell in a children’s movie is scary? Have you seen the size of Stuart Little? Snowbell, voiced by Nathan Lane, was played by a white Persian named Lucky Prince in both the 1999 original film and the 2002 sequel.

8. DC from That Darn Cat 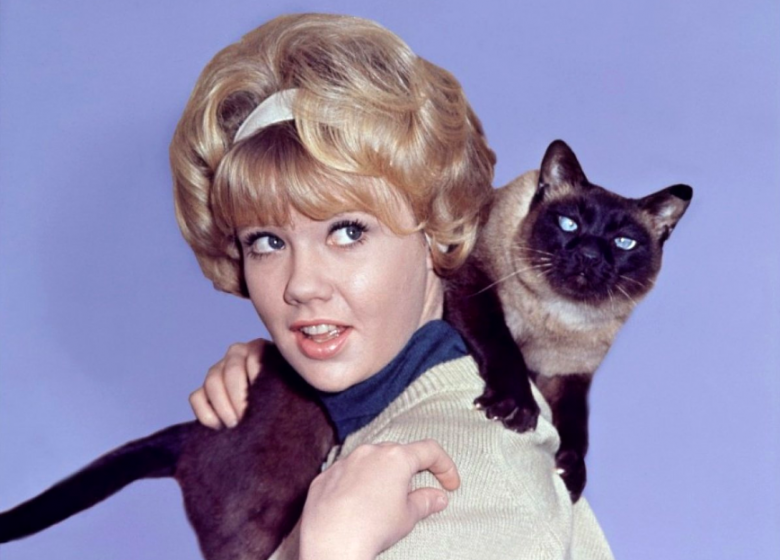 Leaving scary completely behind us, we enter the wonderful world of cinematic cat hijinks with D.C from the 1965 Walt Disney film That Darn Cat. DC was played by several different Seal Point Siamese cats. According to IMDB trivia, “In the original 1963 novel, Undercover Cat, DC stands for Damn Cat.” 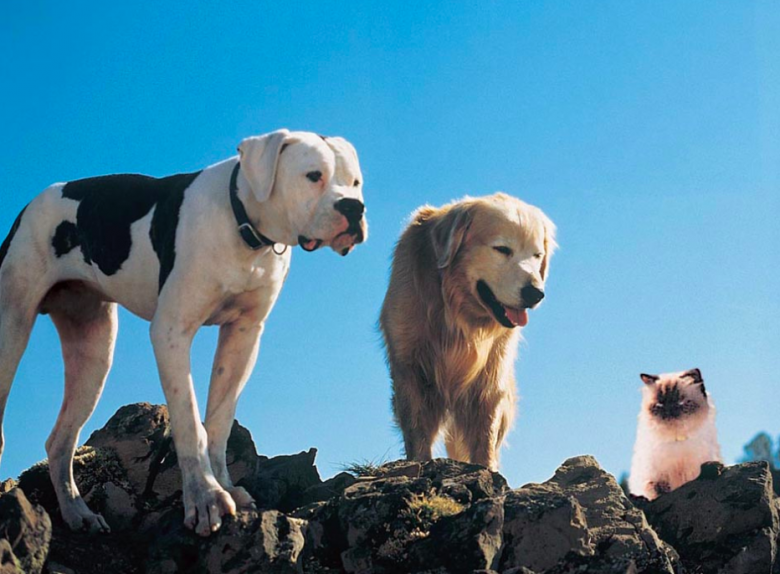 This 1993 movie is a remake of the 1963 original, (which just so happened to star one of the cats who played D.C. in That Darn Cat), and features a cat, Sassy, and two dogs who encounter many adventures as they try to reunite with their humans.

Unlike the original version of the movie, which used Siamese cats, the remake went for full fluff effect, employing the talents of eight different Himalayan cats to play Sassy (voiced by Sally Field). 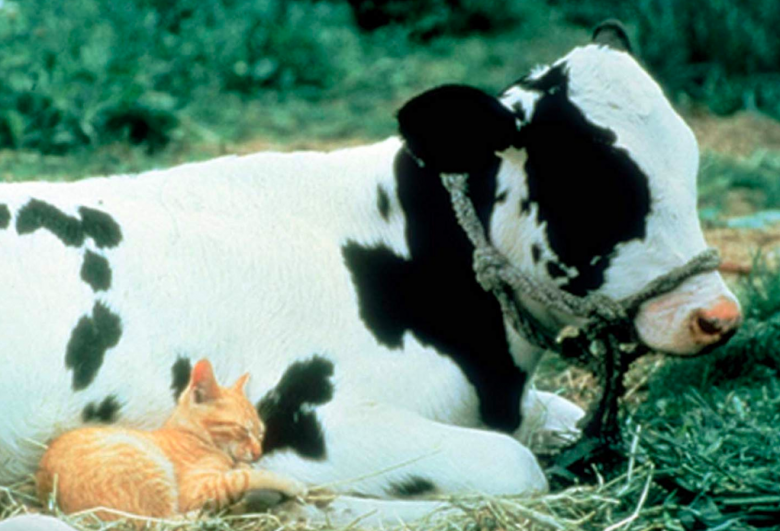 Another feline-canine adventure movie, Milo & Otis, was one of the top films in Japan when it was released in 1986 (under the original name, The Adventures of Chatran). A shorter, English-language version was released by Columbia Pictures in 1989.

While there have been allegations of animal abuse during the filming, investigations resulted in no charges. Still, the movie does contain what many animal rights activists consider questionable scenes, including one where a cat plunges more than a hundred feet off a cliff into the ocean. 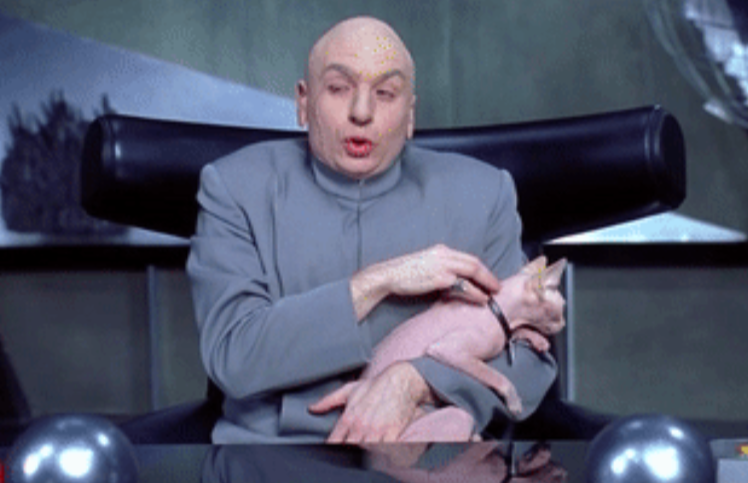 Yeah, that last one was kind of a downer, man. Decidedly not groovy. So, we’re following up with Mr. Bigglesworth, the Persian cat companion of Dr. Evil who is cryogenically frozen then loses all his hair during the thawing process. Which wouldn’t be funny except it’s fiction.

C’mon, come with us back to the happy world of cute, fluffy cats. Or hairless cats. Cats! Mr. Bigglesworth in his hairless form was played by the very cleverly named Ted Nude Gent, a Sphynx cat.

12. Cat from Breakfast at Tiffany’s 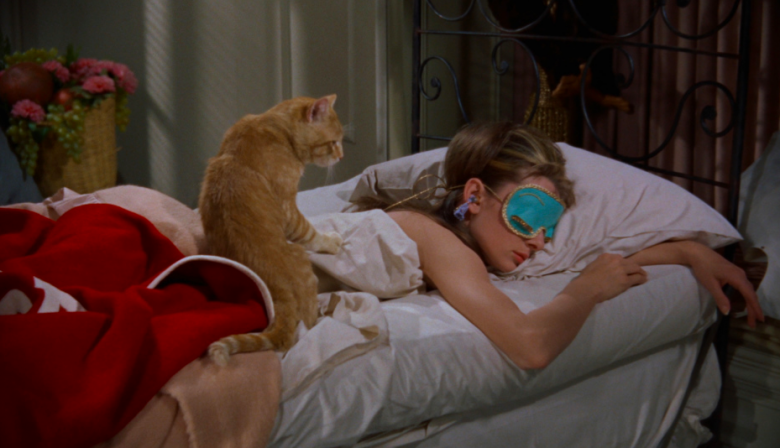 Determined to be “a poor, nameless slob” like herself by the movie’s protagonist, Holly Golightly, Cat ends up being one of cinema’s great feline heartstring tuggers.

While the character Cat is decidedly downtrodden, the cat who played him was actually a bit of a celeb. According to the book, Cat Lover’s Daily Companion, this feline actor named Orangey, “was one of Hollywood’s most widely demanded feline actors back in the day. A marmalade tabby trained by famous animal wrangler Frank Inn, Orangey already had a decade of acting experience before he became Audrey Hepburn’s onscreen companion.”

13. Fluffy from The Brady Bunch 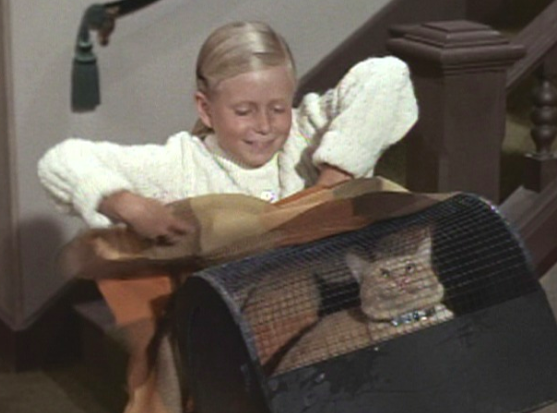 You don’t see a lot of cats on television, and that includes this cat. Fluffy appears in only one episode of The Brady Bunch – the very first, where Fluffy (the girls’ cat) and Tiger (the boys’ dog), wreak havoc on Mike and Carol’s backyard nuptials – and then is never heard of or from again.

What happened to Fluffy? We may never know. 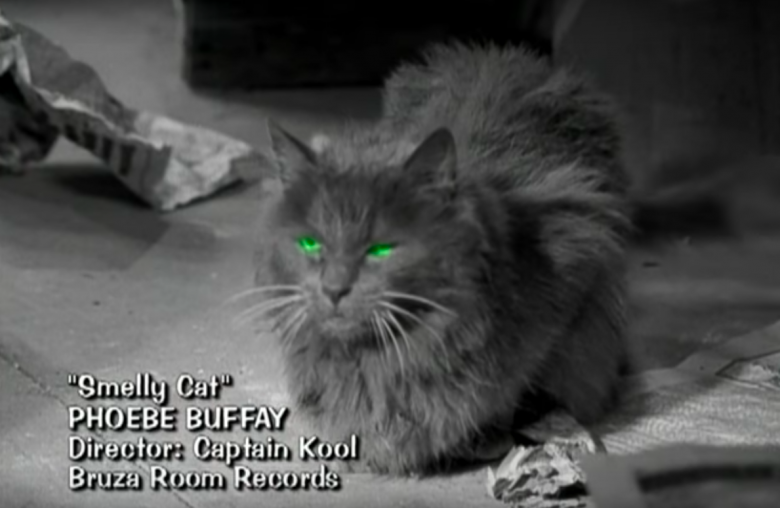 Remember the one where Smelly Cat hangs out with the gang at Central Perk? No? That’s because like Fluffy in The Brady Bunch, Smelly Cat made only one appearance on Friends, and even then it wasn’t really Smelly Cat or a true appearance. Like Fluffy, Smelly is famous for being a memorable character that wasn’t really on the show.

Here’s how it went down if you don’t remember: Phoebe gets a chance to make a video for her song, Smelly Cat, which she makes only it’s voiced over by another singer who is “less attractive” that Phoebe and many Smelly Cat parallels are drawn. 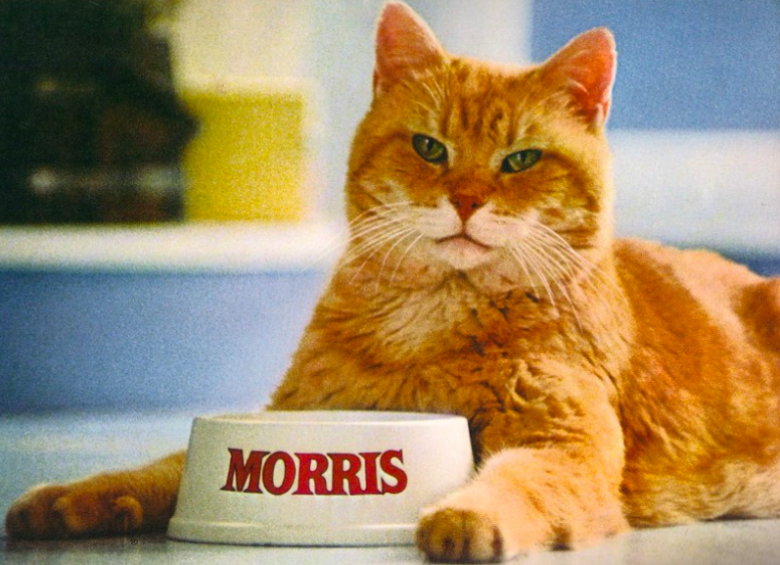 Morris may be the most well-known and memorable television or movie cat of all time, and one of the most recognizable ad campaigns of all time. Over the years, Morris has been played by three different cats. The original Morris was discovered at a Chicago area animal shelter. In fact, all three orange tabbies that have played Morris have been rescues.

Want to continue this trip down TV memory lane? Check out our roundup of 35 of your favorite old TV shows worth watching again. 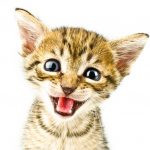 Previous Story:
43 pictures of really adorable kittens that will make you feel better 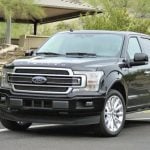 Next Story:
Lap of luxury in Ford F-150 Limited with Ecoboost V6 power