Drivers of these cars are involved in the most accidents

It’s inevitable that drivers will make mistakes on the road. But however innocent a driver’s intentions are, road accidents can often be more than just minor blips, resulting in serious or even fatal casualties. The National Safety Council reported that despite a decline in overall traffic in early 2020 due to quarantine orders, the rate of fatal driving accidents increased by 14% from 2019.

Maybe this significant spike in motor vehicle accidents is due to the general frustration with the current state of the world, causing greater irritability on the road. More likely, however, the decrease in overall traffic in 2020 due to shelter-in-place policies has led to more reckless driving. With fewer cars around, drivers often take more liberties and disregard the rules of the road, resulting in more accidents overall.

Even though the accident rate went up across the entire nation in 2020, the drivers of certain cars were found to be the culprits of on-road incidents more than others. To understand which cars’ drivers encountered more motor mishaps, the data scientists at Insurify examined the data to determine the car models with the most accidents. 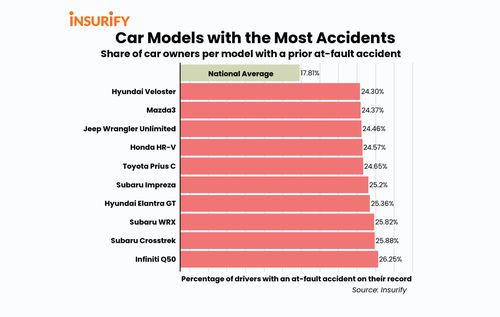 The research team at Insurify, an auto insurance comparison site, examined their database of over 2.5 million car insurance applications to identify the car models with the most accidents. To apply for quotes, drivers input personal and vehicle information, including the model of the car they drive and whether or not they have been caused an accident on the road in the past. The research team analyzed the number of car owners with a prior at-fault accident against the total number of drivers for each model to determine the proportion of drivers with an accident on record. From this selection, they narrowed down the subset to the models with the 10 highest shares of accident-prone drivers.

Safety ratings come from the Insurance Institute for Highway Safety’s 2020 evaluations. IIHS determines the safety status of different models by looking at crashworthiness — how well a vehicle protects its occupants in a crash — and crash avoidance and mitigation — technology that can prevent a crash or lessen its severity. Models can be ranked as overall good, acceptable, marginal or poor. The MSRP for each car is from the most recent available model listed on Autoblog.

Car Models with the Most Accidents

The Veloster is on the smaller end of available cars on the market, but despite its size, it packs a punch — drivers of the Hyundai Veloster experience at-fault accidents at a rate that exceeds the national average by 27%. Even though this vehicle is a small-sized hatchback that sits relatively low to the ground, the Veloster is stacked with safety features that earned it the title of a 2020 Top Safety Pick by IIHS due to its front crash prevention measures and high-caliber headlights. It’s lucky for its drivers that their car is equipped with these features — with the accident rate they’re experiencing, anything to promote safety is welcome.

Drivers of this car should think twice before going zoom-zoom because Mazda3 drivers get into accidents on the road at a rate 27% greater than that of the average driver. The Mazda3 is an industry darling — it was both selected as an Editor’s Pick by Autoblog and earned the especially impressive title of an IIHS 2020 Top Safety Pick+. With a base price that’s 46% below the national average, the Mazda3 is championed as a comparably affordable manual luxury vehicle, albeit one with highly accident-prone drivers.

The eighth car on the list attracts drivers that seem eager to live up to this car’s name — with an accident rate greater than the national average by 28%, drivers of the Jeep Wrangler Unlimited evidently tend to exceed limits and courteous driving protocol. The Jeep Wrangler is the second-priciest model that made the top 10, and unlike the majority of the other car models with the most accidents, IIHS gave it the subpar safety rating of Marginal. For how often they get into car accidents, Jeep Wrangler Unlimited Drivers do not have the peace of mind knowing their vehicle is equipped with high caliber safety measures to protect them, making their spot in the rankings even more concerning.

The seventh car on the list is a versatile crossover with high functionality, spacious interiors and a tendency toward on-road slip-ups. The Honda HR-V has an accident rate that’s 28% higher than the national average, making it one of the most accident-prone on the road. While the HR-V earned an IIHS Top Safety Pick nod in 2019, it did not reclaim its title in 2020 due to IIHS’s updated, stricter safety standards. However, this small and sporty powerhouse still earned an overall good rating, meaning that its accident-prone drivers have somewhat of a cushion should they blunder while driving.

This petite hatchback may look like an unassuming fuel-sipper, but don’t be fooled — the Toyota Prius C’s 28% above-average accident rate beats out much burlier vehicles to claim the sixth spot in the rankings. Toyota discontinued the Prius C in 2019, and its 2018 crash test performance earned an average IIHS safety rating. Given its lightweight and below-par safety measures, drivers of the Toyota Prius C are taking a sizable risk when hitting the road, seeing as they experience as many accidents as they do.

The fifth on the list is may be a star in safety ratings, but not so much when it comes to safe driving. Subaru Impreza drivers are involved in at-fault accidents 30% times more often than the average driver. This IIHS 2020 Top Safety Pick is an affordable, reliable and secure vehicle marketed towards the conscious consumer. Unfortunately, how tactful these drivers are when buying their vehicles seems to go out the window when they take them out for a spin. Luckily, the Impreza has impeccable safety measures, such as front crash prevention and strong headlights to limit damages as much as possible.

Drivers of the fourth car on the list seem to value fuel efficiency, affordability and practicality when it comes to their vehicles. The Hyundai Elantra boasts status as an IIHS 2020 Top Safety Pick and comes equipped with features such as four-wheel anti-lock brakes and electronic stability control for traction. However, when it comes to conscientious on-road behavior, Hyundai Elantra GT drivers fall slightly short. For all of its savvy protective technology, drivers of this model are notoriously unwieldy — the accident rate for the Hyundai Elantra GT eclipses the national average by 30%.

The Subaru WRX, which has not only come into the spotlight for having particularly speedy drivers (of all car models, WRX drivers accumulate the most speeding tickets), but it seems to also have drivers who are inclined to driving blunders. The accident rate for the Subaru WRX exceeds the national average by 32%, meaning that drivers of this IIHS 2020 Top Safety Pick are holding fast faith in this sport sedan’s safeguarded reputation.

Subaru’s are coming in hot for their high prevalence of on-road accidents, and number two on the list is no exception. Drivers of the Subaru Crosstrek are involved in at-fault accidents at a rate that’s 32% higher than the national average. Like other models from this brand, the Crosstrek boasts high-caliber safety features and was included in IIHS’s 2020 Top Safety Picks. However, its high accident rate indicates that Crosstrek drivers are not necessarily honoring their car’s protection-oriented origins while out on the road.

The top car model with the highest accident rate stands out for multiple reasons. The Infiniti Q50 is one of the mere two in the rankings that were not chosen as 2020 Top Safety Picks, although IIHS did ultimately rate its overall safety features as Good. The Q50 is also the most expensive of the models in the list, coming closest to the average sale price of a motor vehicle compared to the rest. This outlier on the list has drivers who get into accidents at a rate 33% higher than the national average. The Infiniti Q50 may be an exception to many of the patterns across the rankings, but not when it comes to hosting a high volume of accident-prone drivers.

This article
originally appeared on Insurify.com and was
syndicated by MediaFeed.org.

The scariest drives in America 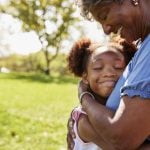 Next Story:
How to build generational wealth

About the Author / Emily Leff