Guess how many couples start married life with wedding debt 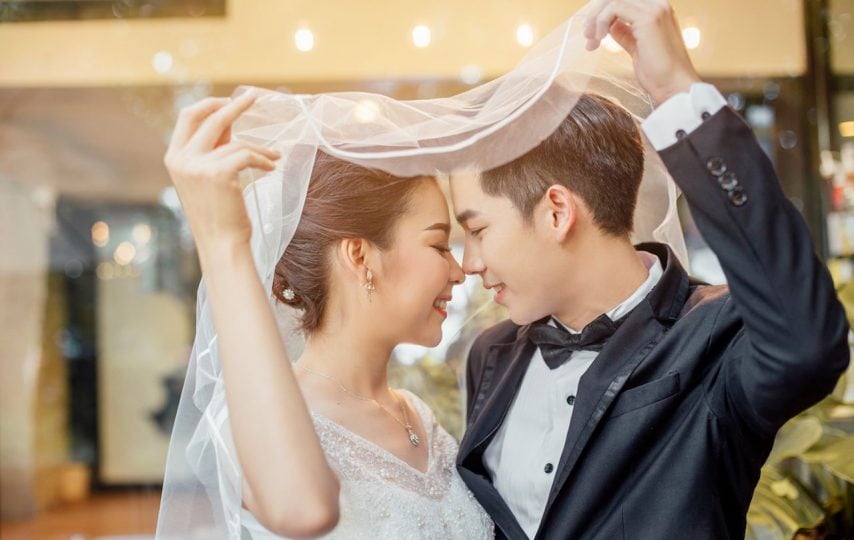 When a couple says their wedding vows, they commit to a lifelong union of their aspirations, life goals and finances. However, many couples kick off married life by taking on thousands of dollars in debt to finance their wedding: About three in 10 engaged couples plan to take out debt to cover wedding expenses, according to a LendingTree survey conducted in April 2020. Read on to find out how much they borrowed, what kind of debt they borrowed and why they borrowed it. 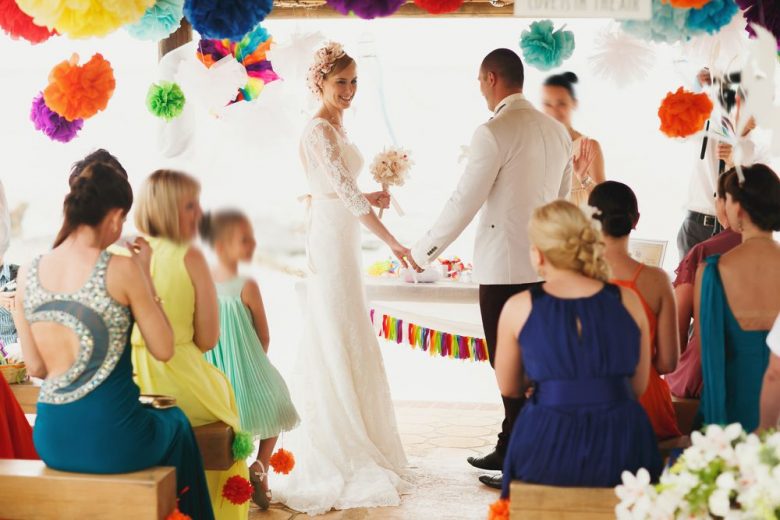 LendingTree commissioned Qualtrics to conduct an online survey of 920 Americans who are currently engaged to be married. The survey was fielded April 6-10, 2020.

COVID-19 has increased the number 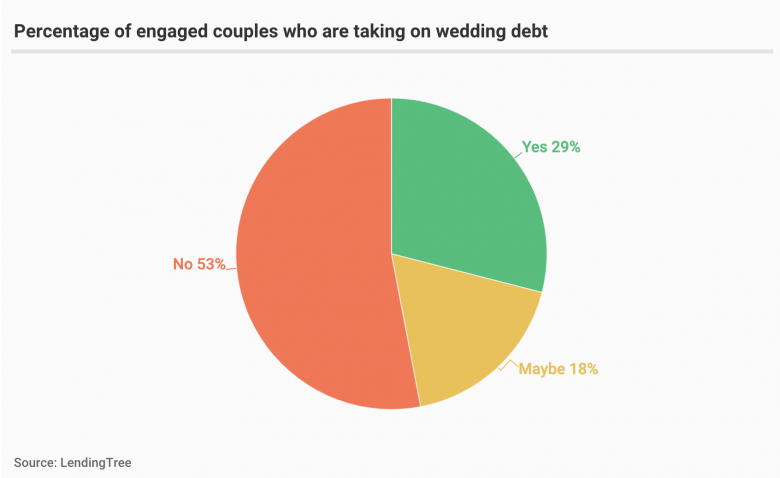 Among couples who changed their wedding plans due to the COVID-19 pandemic, about 35% took on debt, compared with 29% of couples as a whole. It makes sense that the couples who had to change plans might need more money to fund their weddings. By changing dates, some couples may have lost deposits or had to book new, costlier wedding dates than originally planned.

A majority of couples will take on less than $10,000 in wedding debt 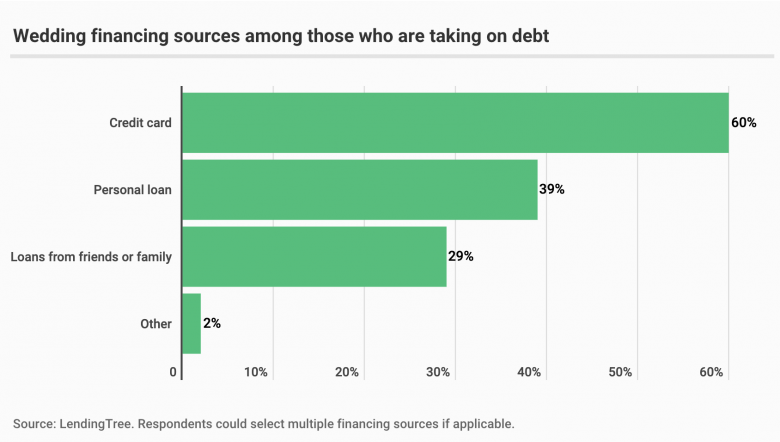 See the breakdown below:

Couples will likely use a mixture of debt and other financing methods to pay for their big day, seeing that the average wedding costs about $25,000, according to research from companion site ValuePenguin.

Credit card, personal loan debt are most common among couples

Engaged couples that took out debt were most likely to use credit cards when compared with personal loans and borrowing from friends and family.

Using a credit card to finance a wedding is an option to cover big-ticket wedding expenses rather than dipping into savings, and it can even be an opportunity to help couples earn rewards, like airline miles. However, paying for wedding expenses with a credit card also means you’ll have to pay compound interest when a balance is carried month over month.

Personal loans were also a popular option for couples who needed wedding financing, with nearly four in 10 turning to wedding loans. As an unsecured loan, the borrower doesn’t require collateral, though strong credit will likely be needed for qualification. Even then, personal loans can come with high APRs, meaning that a couple’s wedding expenses will come with the added cost of interest even as they benefit from a fixed interest rate and repayment timeline.

Here’s when the couples we surveyed plan to completely pay off their wedding debt:

Just under a quarter of those taking on debt to cover wedding expenses will need more than a year to repay that debt.

For many couples, money leads to contention around the wedding 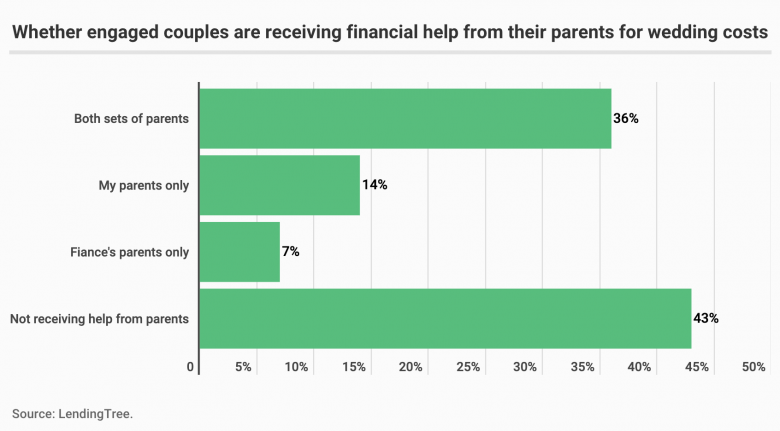 Engaged couples go to great lengths to plan the wedding ceremony and reception they’ve always wanted. Making that dream a reality is easier said than done, though, and it comes at a price that often goes beyond the literal cost. Our survey found that 37% of couples argued about wedding expenses.

The arguments don’t start and end with the couples, either: Fifty-seven percent of couples received financial help from their parents, and of those, nearly four in 10 reported arguing with their parents over wedding costs. 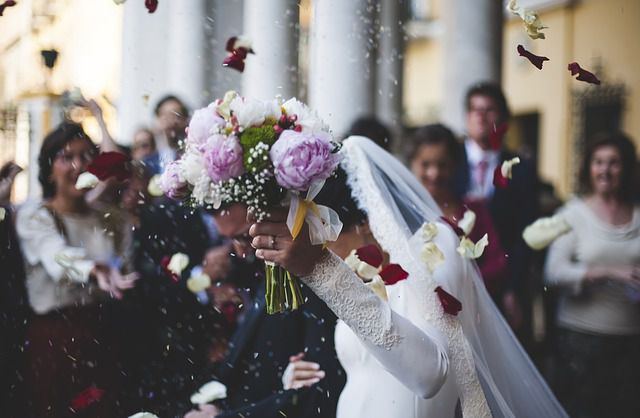 You can’t put a price on having the perfect wedding day — at least that’s how 33% of the couples we surveyed see it. In addition, nearly half said that they took on debt to pay for their wedding to help them afford the day they’ve always dreamed of having.

See the breakdown of why couples decided to take on wedding debt below:

But many couples were unprepared for the cost

Many of the couples we surveyed didn’t feel they had a choice but to take on debt to finance their wedding, with a fifth of them admitting that they didn’t plan on it but were unprepared for the total cost of the wedding.

The cost of renting a venue was the biggest surprise to couples. One in five couples were most surprised by how much they’d end up spending booking a venue. The other most surprising costs were: photographer (12%), flowers (11%) and caterer or baker (10%).

Where couples are taking on the most wedding debt 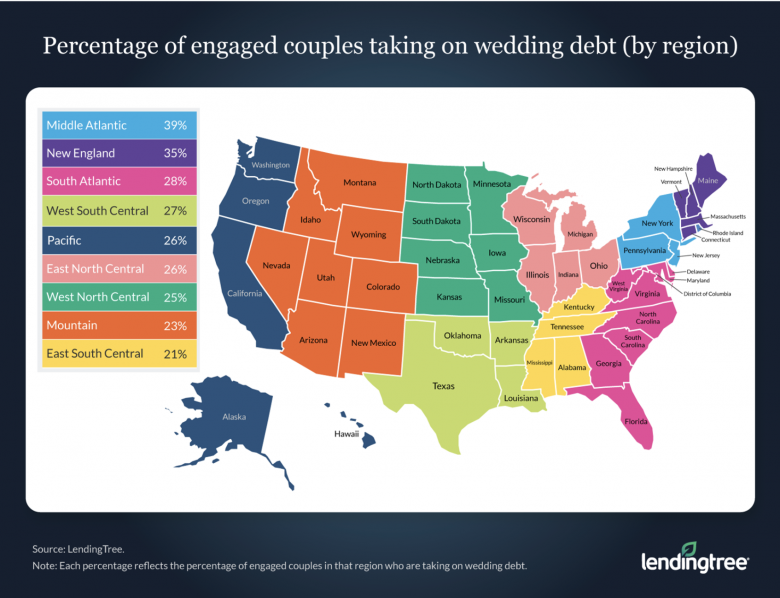 Couples in some regions of the country take out wedding debt at higher rates than couples elsewhere. Nearly four in 10 engaged couples living in the Middle Atlantic region (which comprises New York, New Jersey and Pennsylvania) are going into debt for their wedding. Just 21% of those living in the East South Central region (which includes Kentucky, Alabama, Tennessee and Mississippi) said the same.

The average cost of a wedding depends on where you live. Wedding venues in certain parts of the country, for example, are far more expensive due to increased demand, so it makes sense that engaged couples in some regions need to lean on financing tools to pay for a more expensive ceremony. Couples in some areas of the country are likely to pay twice as much for a wedding as they’d pay in others.

Keep clicking to see the top five most and least expensive states to get married in.

The most expensive states for weddings 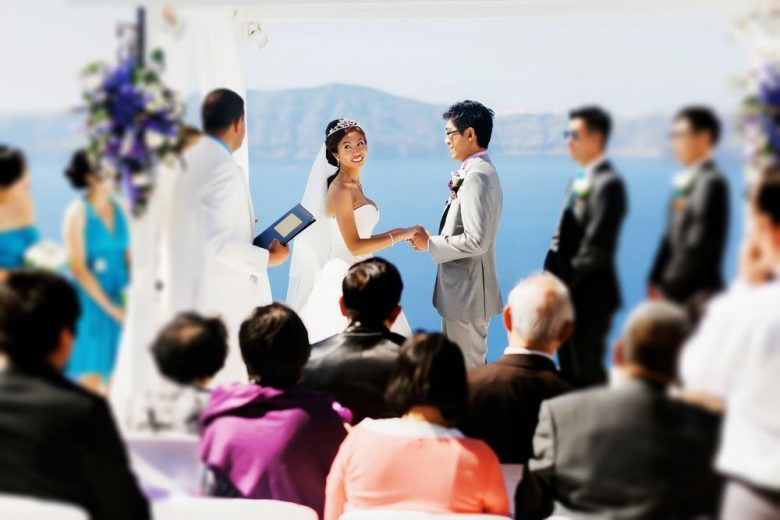 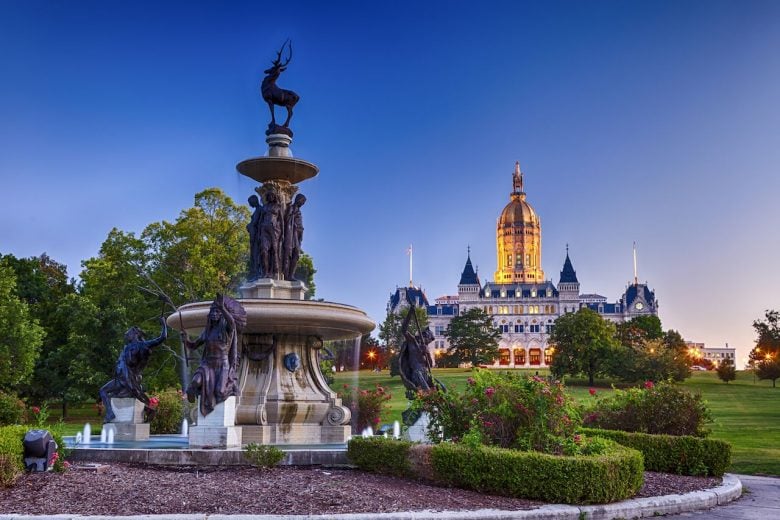 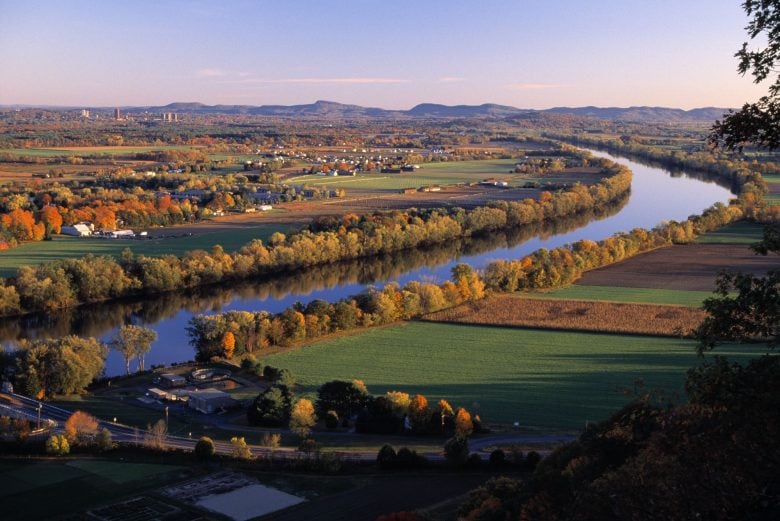 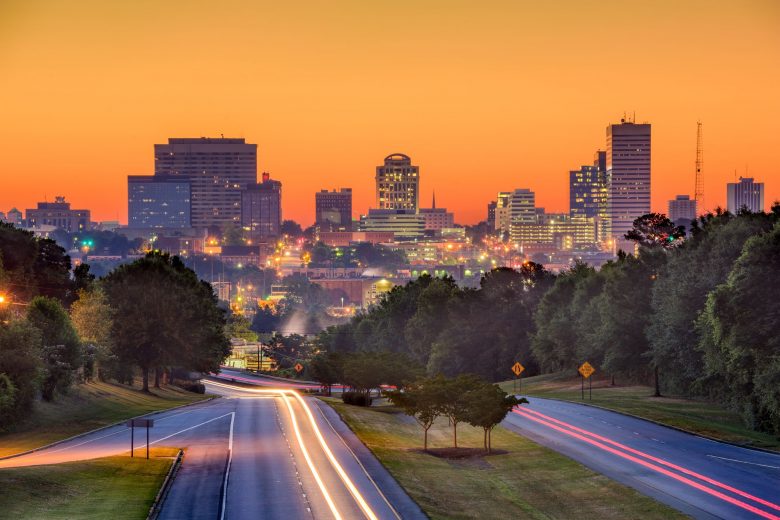 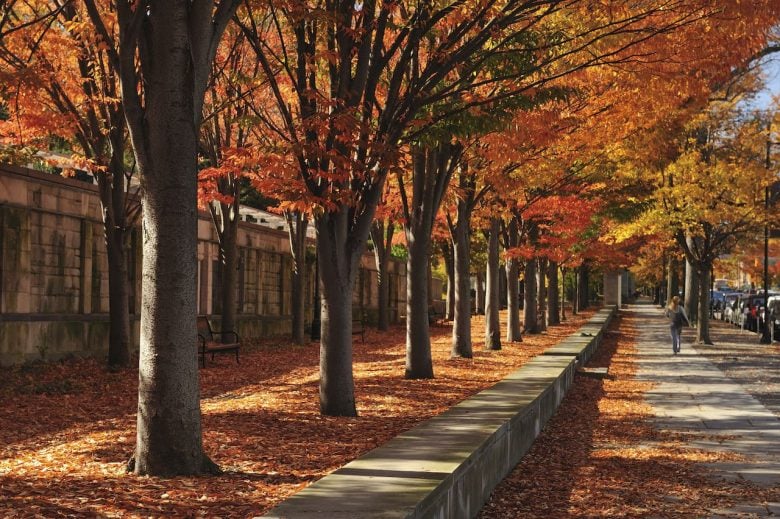 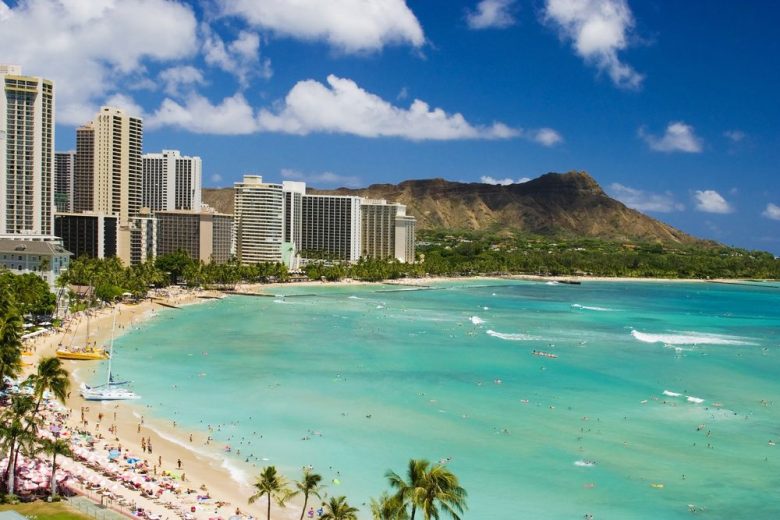 The cheapest states for weddings 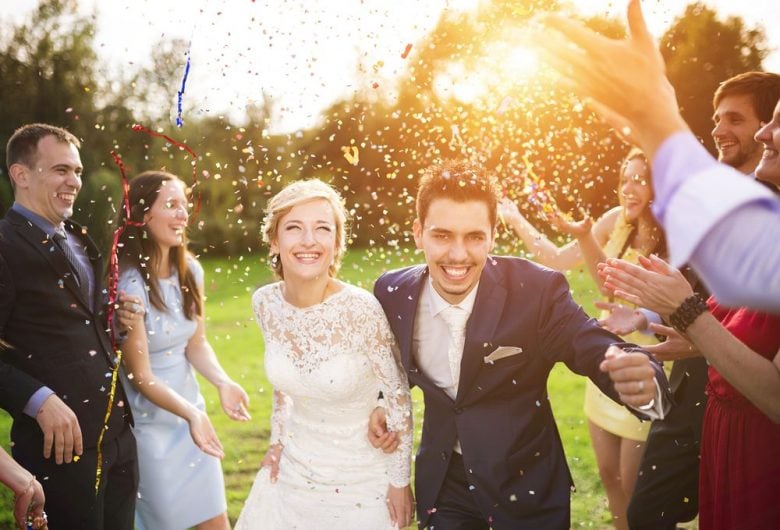 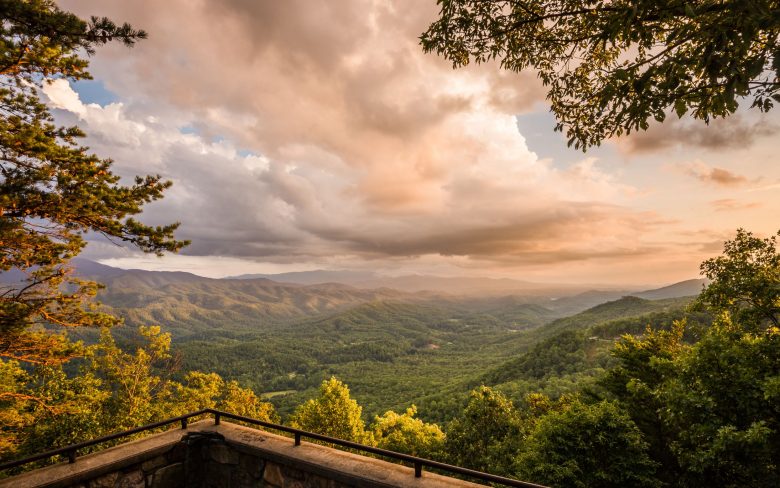 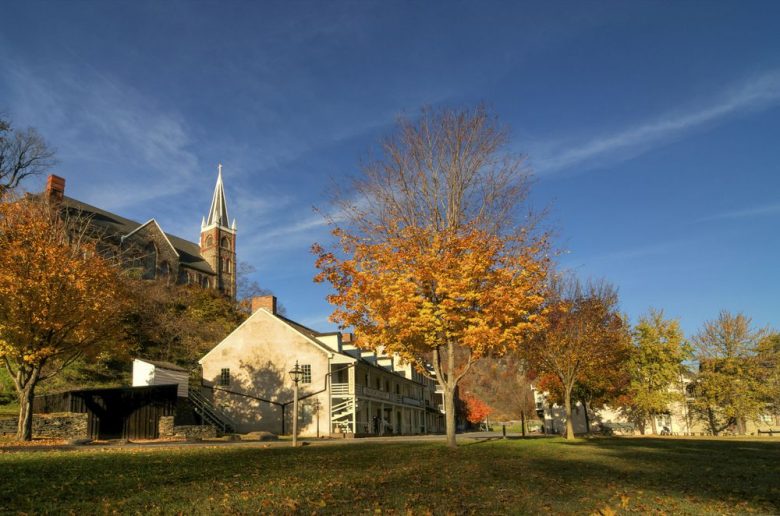 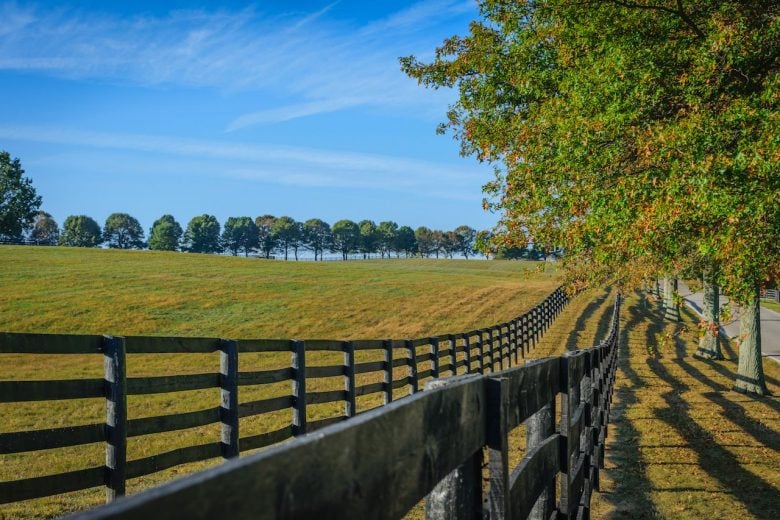 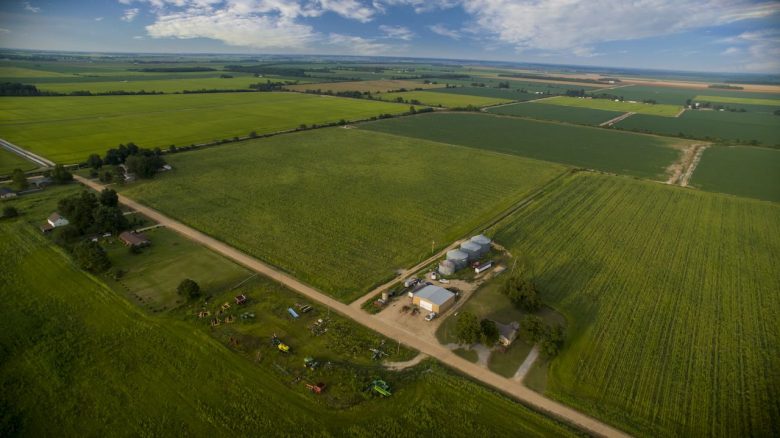 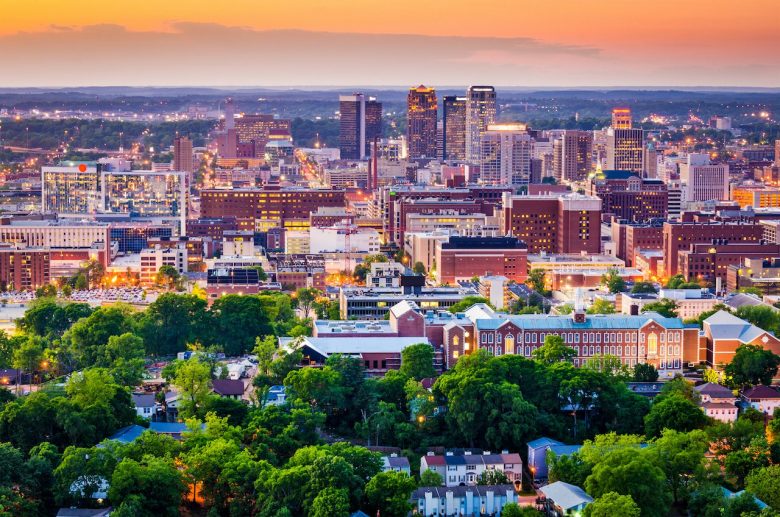 This article originally appeared on LendingTree.com 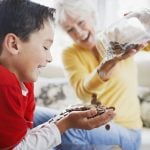 Previous Story:
What is the average savings by age? 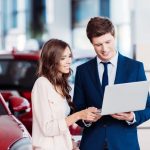 Next Story:
Can you buy a car with a credit card?