How much more do electric car owners really pay for insurance?

Which Electric Vehicles Are the Most Expensive to Insure?

At the lower end of insurance costs is the electric Hyundai Kona. The typical yearly insurance premium for this vehicle is $1,339 — just under the national average. However, these rates still don’t beat the popular, gas-powered Honda Accord, which costs $1,234 annually to insure. Even lower in costs is another combustion favorite — the Toyota Camry — which costs $1,267 to insure per year. 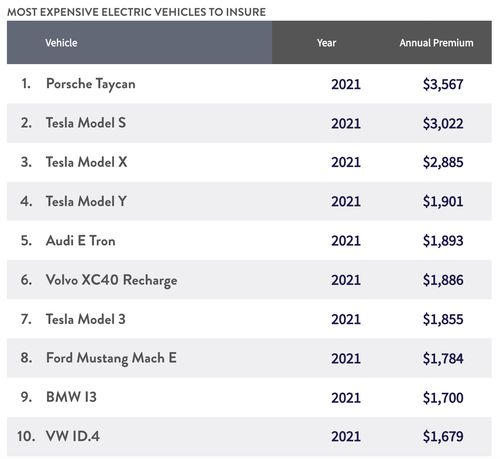 Teslas Cost More to Cover Than the Majority of Electric Vehicles

Generally, the more your car costs, the more expensive it is to insure — this is part of why Tesla premiums are higher-than-average. Another reason insurance is so costly for Teslas is that repair and maintenance costs tend to be much higher than most vehicles’.

A 2015 study by the Insurance Institute for Highway Safety (IIHS) reported that the Tesla Model S had higher claim frequencies, claim severities and overall losses than comparable large luxury cars.

Insurance costs for Teslas are significantly higher than most other vehicles in their combustion categories. View the graph below to see how the insurance costs of each Tesla model compare to other cars in the same category.

Why Do Electric Vehicles Cost More to Insure?

Car insurance costs for electric vehicles tend to be much higher than combustion vehicles. But why are premiums so much higher for these cars?

In general, insurance for electric vehicles isn’t based on the same principle as traditional cars, explains Miranda Yan, the co-founder of VinPit, a car data company that helps users run searches about vehicle information or history.

According to her, there are a few key reasons why electric vehicles tend to cost more to insure:

1. They tend to be more expensive than combustion vehicles.

On average, electric vehicles cost more than combustion vehicles. MoneyGeek found that the Fair Price of the electric version of a car model is 50% higher than that of its gas-powered counterpart.

“There are many sensor-based applications [in electric vehicles]; thus, they are more vulnerable to getting damaged in accidents,” says Yan.

3. When parts are damaged, they’re more likely to be replaced than repaired.

Yan notes that EVs usually have varied size components and sensory-based parts that are generally not repaired and recommended to be replaced. “Insurance companies consider that the parts of electric vehicles, if in an accident, will likely need to be replaced, not repaired. That will increase the cost of the [expense], which will be paid by the insurance company,” she says.

4. Their parts are more expensive to replace.

“The increased price of the part will also increase the repair cost to the insurer,” Yan notes. For example, an advanced, engineered battery costs more for insurance companies to cover. On average, those batteries can cost about $7,350 to replace. That’s because the materials needed to power the battery and give it more energy are often expensive.

“Because the market is still new for electric cars, part suppliers are less likely to lead to a less competitive market, making the parts costlier,” Yan says. “EVs are more expensive to repair, and in some cases, they may exceed Insured Declared Values as the market is not yet evolved to make the availability of the part radially, which increases the cost abruptly. Also, generally, it takes more time to repair and needs a different set of skilled technicians. Due to these constraints, they are considered totaled [more often after an accident].” 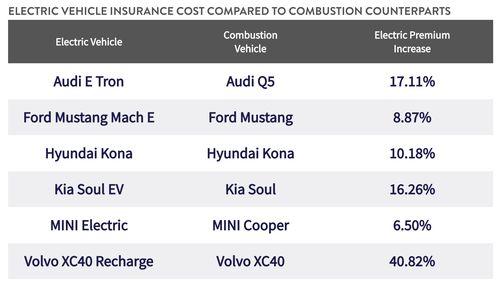 MoneyGeek also found that the Fair Price for a model’s electric version is 50% higher than its gas-powered equivalent. The table below shows the relationship between a vehicle’s purchase price and insurance premiums and demonstrates how much higher insurance costs are for electric cars. 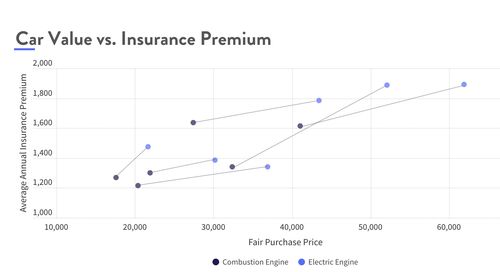 Which Insurers Offer the Best Rates on Electric Vehicles?

MoneyGeek’s review of 17 electric vehicle models showed that USAA offers the lowest rates across the board for an annual premium. However, keep in mind that this company only serves current military members, veterans and their families. The next most affordable provider is State Farm, followed by Progressive.

To find the cheapest car insurance, be sure to compare rates from several providers. Rates can vary by location and other factors like your unique driving record. Also, different insurers charge different rates for specific car models.

Insurance discounts can lower the cost of your annual premium. While the savings offered by each insurer can vary, most companies have bundling, safe driving and good student discounts that make it more affordable for many drivers. MoneyGeek recommends finding all available discounts a provider has and comparing quotes with other insurance companies to find the best rate.

Can Electric Vehicles Help You Save In Other Ways?

While insurance costs may be more expensive, owning an EV may save you money in some ways that conventional cars can’t.

There are many factors to consider when weighing the benefits of an electric vehicle. The high insurance costs and purchase prices of some EVs may be unappealing to some drivers. However, different factors may be more important to others — like potential savings that can come with long-term ownership, such as fewer trips to the mechanic, reduced gas costs, government incentives and a lower carbon footprint.

For this analysis, MoneyGeek collected data from Quadrant Information Services, Kelley Blue Book and Edmunds.com. We analyzed insurance premiums for various make, model and vehicle year combinations from national insurance providers in locations across the country.

The average driver profile is based on the following persona:

This article originally appeared on MoneyGeek.com and was syndicated by MediaFeed.org.

These states will actually pay you to buy a Tesla

Previous Story:
Auto loan preapproval & prequalification: What’s the difference?
Next Story:
Budgeting doesn’t have to be a drag. Here’s how to make it fun

About the Author / Erin C. Perkins