The best comedies on Hulu to stream right now

No matter which streaming platform you look on, you’ll find dozens of great comedies. It may be difficult to say which platform has the best comedies currently streaming, but after looking it over, that title might just go to Hulu.

Sporting well-known classic comedies from the 1980s and underrated indie movies that have been released only a few years ago, there are so many great choices when it comes to watching on Hulu.

To narrow that list down a bit, we made a list of the top must-watch comedy movies currently available on Hulu.

After realizing how little they were able to actually have fun during their high school career, two hard-working graduating seniors (Kaitlyn Dever and Beanie Feldstein) decide to let loose and finally enjoy themselves on the final days of classes.

Featuring a terrific cast with fellow actors Jason Sudeikis, Jessica Williams, Will Forte and Lisa Kudrow in the mix, Booksmart is a wonderfully entertaining comedy that will keep you laughing the entire time and also make you sentimental for the simpler times spent with close friends in high school.

3. Sorry to Bother You

This wildly innovative social comedy tells the story of a young Black telemarketer (LaKeith Stanfield) who begins using a “white voice” to get ahead at his job. As he continues to rise through the ranks of the corporate world, he eventually must choose between his unionizing friends or the promise of profit in this amazingly weird film.

Exploring such themes as race and capitalism, Sorry to Bother You might be one of the most original satirical films ever released, featuring a fantastic cast of diverse actors like Stanfield, Tessa Thompson, Terry Crews, Danny Glover, Steven Yeun and the vocal talents of David Cross and Patton Oswalt. 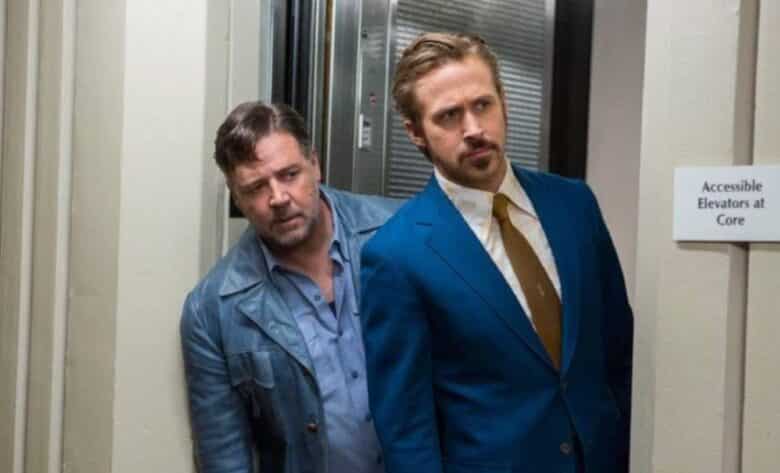 Set in 1970s Los Angeles, Gosling and Crowe’s characters search through the seedy underbelly of the city, trying to find a missing teenage girl caught up in a vast criminal conspiracy. A hilarious neo-noir film, The Nice Guys is an endlessly fun watch, full of great humor, fantastic action and a wonderful mystery.

A science-fiction comedy parodying the space opera genre, Galaxy Quest features an impressive group of actors, including stars Tim Allen, Alan Rickman, Sigourney Weaver and Sam Rockwell. When the principal cast of a decades-old sci-fi show are mistaken for a real-life space crew, the actors join an alien race fighting an intergalactic war to save their species.

This lighthearted comedy adventure film is a love letter to the bygone era of cheesy sci-fi series like the original Star Trek series and is definitely worth a watch for any Trekkies out there.

In this hilarious horror-comedy film, a recently deceased New England couple (Alec Baldwin and Geena Davis) tries to prevent an obnoxious Yuppie family (Catherine O’Hara, Jeffrey Jones and Winona Ryder) from moving into their idyllic country home. In an attempt to drive the family away, the couple hires a “bio-exorcist” specialist named Betelgeuse (Michael Keaton), who ends up being more of a problem than the actual family is. An early Tim Burton film, Beetlejuice showcases many of the director’s now-signature staples, including mixing horror with lighthearted comedy and the gothic with the mundane.

Recently named by the Library of Congress as being “culturally, historically or aesthetically significant,” Shrek is one of the most unique animation movies of its time. In order to live out his fantasy of living alone in his swamp, a grouchy ogre (Mike Myers) partners with an overly talkative donkey (Eddie Murphy) to save a princess (Cameron Diaz) and hand her over to a cowardly feudal lord who wishes to become king (John Lithgow).

Shrek’s outside-the-box parody of traditional fairy tale stories (including a few not-so-subtle jabs at Disney’s animated films) helped establish DreamWorks as a household name in animation and remains one of the most well-known and successful animated movies that the studio has ever released.

One of the most beloved classic comedy films of all time, Caddyshack might just be the funniest sports movies in existence. Caddyshack follows the various strange characters of an elitist country club, including an eccentric millionaire (Rodney Dangerfield), a free-spirited avid golfer (Chevy Chase), a snobbish judge (Ted Knight) and an unstable groundskeeper (Bill Murray) hopelessly hunting a mischievous gopher.

With quite possibly one of the greatest comedic casts of all time, Caddyshack remains one of the most popular golf movies ever and is frequently credited with giving Murray his first breakout role.

A somewhat dark comedy exploring the relationship between social media influencers and their followers, Ingrid Goes West is one of the most off-beat, enjoyable movies you’ll find on Hulu. The movie follows Ingrid (Aubrey Plaza), a mentally unstable, easily-attached woman who decides to stalk an influencer she admires (Elizabeth Olsen) and whom she constantly tries desperately to befriend.

Through this strange plot and concept, Ingrid Goes West offers an in-depth look at just how damaging extensive social media use can be and the unhealthy dependence that can form from over-reliance on it.

An incredibly popular indie comedy, Don’t Think Twice tells the story of a group of improv actors whose lives are thrown into turmoil after one of their own becomes a breakout success. Starring Keegan-Michael Key, Gillian Jacobs and Kate Micucci, Don’t Think Twice is an underrated comedy movie that analyzes how success might affect friend groups and how one comes to terms with their hopes for success in the future.

One of the most popular cult films of all time, Heathers completely turned the coming-of-age story on its head, creating a wonderful dark comedy about teenagers struggling with their emotions and the social hierarchy that dominates high school life.

Written to provide a more cynical approach to the teen movies of John Hughes that dominated the ‘80s, Heathers depicts the lives of four girls whose lives are derailed by the arrival of a new teenager intent on eliminating popular kids from school once and for all. It’s a brutal, funny, unforgiving satirical movie, but Heathers’ success and cult status is undeniable.

This little-known comedy might just be the funniest movie you’ve never heard of. Set in the 1300s Italy, the film follows members of a convent who try and fail to abide by the strict rules of their religion (namely, abstinence).

Loosely based on director Clea Duvall’s own experiences revealing her sexuality to her family, Happiest Season details a young woman’s (Kristen Stewart) attempts to come out to her conservative family during the family’s annual Christmas get-together.

Featuring an amazing cast (a recurring theme on this list) that includes Stewart, Mackenzie Davis, Aubrey Plaza, Alison Brie and Dan Levy, all of whom offer fantastic comedic and dramatic performances, Happiest Season is a delightfully warm romantic comedy movie and should definitely be on your watchlist this coming holiday season.

A science-fiction rom-com like no other, Colossal follows the life of a depressed American young woman (Anne Hathaway) whose emotions somehow manifest into a giant reptilian monster wreaking havoc in South Korea. Initially described as “Godzilla meets Lost in Translation,” and starring Hathaway, Jason Sudeikis and Dan Stevens, Colossal was very warmly received by critics, who praised the film’s script, unique premise and Hathaway’s performance in the movie.

Comedy is a hard genre to nail down or recommend to others. What one person might find funny, another might find non-comedic at all. The key to any great comedy, however, is not only that it provides plenty of laughs, but that it also entertains, engages you and keeps you drawn in throughout. These are 15 of the best comedy movies to stream on Hulu, and that’s why we recommend that you check them out as soon as possible!

19 family movies that you won’t hate

Previous Story:
How to make Park City the perfect winter weekend escape
Next Story:
The best apps for earning passive income in 2022

About the Author / Richard Chachowski