The best places to survive the apocalypse

Between a deadly virus, social unrest, and geopolitical uncertainty, you could be forgiven for thinking the state of the world is getting downright Biblical.

The academic community agrees, so much so that it’s begun the process of scoping out the best places to live when society collapses. A study appeared in the journal Sustainability in July 2021 that ranked various locations according to how resilient they would be in the event of an apocalypse, which could be triggered by financial collapse, the continued spread and mutation of the coronavirus, climate change, you name it.

These locations were ranked according to such metrics as their ability to grow food, protect their borders, and manufacture goods. Read ahead and see which places are your best bet for survival when the grid finally goes down, according to researchers at the Global Sustainability Institute in Cambridge, United Kingdom.

Singapore made the list, but just barely. What stopped it from ranking higher was the very small amount of agricultural land and indigenous energy sources, but its low population and direct access to the South China Sea and Indian Ocean made this island city-state a place to consider when riding out Armageddon.

Luxembourg is a landlocked country bordered by Belgium, France, and Germany. Its low population and relatively large amount of agricultural land are definitely selling points, but the country itself is teeny tiny, which means its agricultural capacity is limited.

Just like Luxembourg, Austria is a small, landlocked country with a low population and high fraction of agricultural land. Its indigenous renewable energy sources are described in the study as “abundant,” and it also received good marks for its manufacturing capacity.

This one’s a little tricky because the study didn’t specify North or South Korea, just Korea itself. At the same time governments have a tendency to collapse in the event of an apocalypse, so maybe that’s just as well. The country was given this ranking based in part on its direct access to the East China Sea and Sea of Japan, direct connection to the Eurasian land mass, and moderate indigenous renewable energy sources.

The Netherlands has a lot going for it as a place to escape the end of civilization. It offers direct access to the North Sea and is centrally located within major European population centers. However, its high population and low total land area means that there’s not much agricultural land to go around.

Switzerland has a low population and high fraction of agricultural land. That’s the good news. The less good news is that the country is very small and therefore has little agricultural land to go around. But its moderate indigenous renewable and non-renewable energy sources, and high-tech economy with moderate manufacturing capacity are definitely selling points.

Denmark has a lot going for it in terms of post-apocalyptic attractions. It has close proximity to large European population centers, abundant indigenous renewable energy sources, a modern high-tech economy, and moderate manufacturing capacity. It’s only its small total land area that stops it from scoring higher.

France has quite a bit going for it as a place to live out humanity’s last days. It has moderate agricultural land per capita, direct access to the North Atlantic Ocean, abundant indigenous energy sources, and a modern high-tech economy with a large manufacturing capacity. Ooh la la!

Germany has a lot of the same attributes that France has, with two exceptions. The not so good is that while France has moderate agricultural land per capita, Germany’s is low. On the plus side, it beats France by having what the study calls a “very large” manufacturing capacity.

Konichi wa. Like Germany, Japan has a lot going for it. It has direct access to the Sea of Japan and the Pacific Ocean, lots of energy sources and a “very large” manufacturing capacity. The population-to-agricultural-land ratio is not so great, so the country doesn’t score higher, but otherwise, this island archipelago in the northwestern Pacific Ocean is a good place to be in the event of Armageddon.

Don’t let Sweden’s mediocre population-to-agricultural-land ratio put you off. When civilization collapses, the land of Ingmar Bergman and ABBA will offer you direct access to the Baltic and North Seas and a direct land connection to the Eurasian land mass. Sure, its high northern latitude makes it pretty far from any large European population centers, but that’s all the better to help you keep Sweden’s abundant energy sources a secret.

Just like its Scandinavian neighbor Sweden, Norway ranked high as a destination to seek out if the world ends and you are not among the Raptured. It has the same issue as Sweden in terms of not having a ton of agricultural land to go around, but its energy sources are described as “abundant,” and it boasts a high-tech economy and moderate manufacturing capacity.

Take off, hoser! When the End Times come, you’ll want to take refuge in the Great White North, otherwise known as Canada. Its very large land area means lots of elbow room for everybody, and a good portion of that land is ready for agricultural use. This study did not mention a high frequency of Sasquatch attacks, so there’s that too.

If you live in the United States and the apocalypse happens, there’s good news – you already live in one of the highest-ranking countries in which to ride out such a calamity. Sure, it has a huge population of 335 million people, but there’s a high amount of agricultural land and very large total land area, so grow all the corn you want. Its modern high-tech economy and very large manufacturing capacity are also selling points.

For some people, the fact that Game of Thrones was shot in Iceland is enough of a reason to move there. But that’s not all that it has going for it – it has a moderate amount of agricultural land per capita, direct access to the North Atlantic Ocean, abundant indigenous energy sources, and a modern high-tech economy. It’s also where Björk comes from.

Brexiteers who cheered their country’s departure from the European Union will be happy to know that come the apocalypse, they are already situated on prime real estate. Featuring direct access to the North Sea and the North Atlantic Ocean, this island in the northeastern Atlantic Ocean is situated at mid-high northern latitudes, with abundant indigenous energy sources and a large manufacturing capacity.

Ireland’s low population and high fraction of agricultural add up to a post-apocalyptic scenario in which survivors can have their own small meadow if they want. This island in the northeastern Atlantic Ocean has moderate indigenous renewable energy sources, but since its manufacturing capacity is predominantly based on primary resources, bring a shovel and a miner’s helmet.

When it comes to watching civilization collapse, it’s hard to find a better vantage point than the one you’ll get from Australia. There’s a very large amount of land mass, and half of it is agricultural land, leading the study to characterize its agricultural land per capita as “very high.” Combine that with abundant indigenous energy sources and moderate manufacturing capacity, and it all adds up to a great place to welcome the Four Horsemen.

With its low population and high fraction of agricultural land, New Zealand was found to be the best place to live when things go really, really south. This island archipelago in the southwestern Pacific Ocean has abundant indigenous energy sources, and they even filmed Lord of the Rings there. So just stay away from the fiery pits of Mordor and you’ll have a very pleasant end of the world.

We would be remiss not to mention a few other places that may not be just as good as number one but are worth a tip of the hat. For example, in the event that the apocalypse that takes place is a zombie apocalypse, you might be able to find food, shelter, and respite from the cannibalistic undead floating around at sea.

Alcatraz Federal Penitentiary has not housed convicts in many decades, and its location away from the mainland would make it a little easier to defend your position from some kind of post-apocalyptic cult to attack as they impose their New World Order by force. There’s no food there though, which is an issue.

If Alcatraz Island’s place in the middle of the water proves an effective deterrent against raids and plundering, then an oil rig out at sea would be even better. Many futuristic ne’er-do-wells probably wouldn’t even want to bother using up the fuel that it would take to get out there. Again, no food, but hey, if you can fish and desalinate water you may be good to go!

In George Romero’s 1978 horror classic Dawn of the Dead, a group of survivors escapes a horde of flesh-eating zombies by hiding out in the Monroeville Mall in Monroeville, Pennsylvania. Should human demise come down to zombies, it’s something to consider. 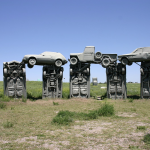