This tasty cocktail trend is way beyond a gimmick 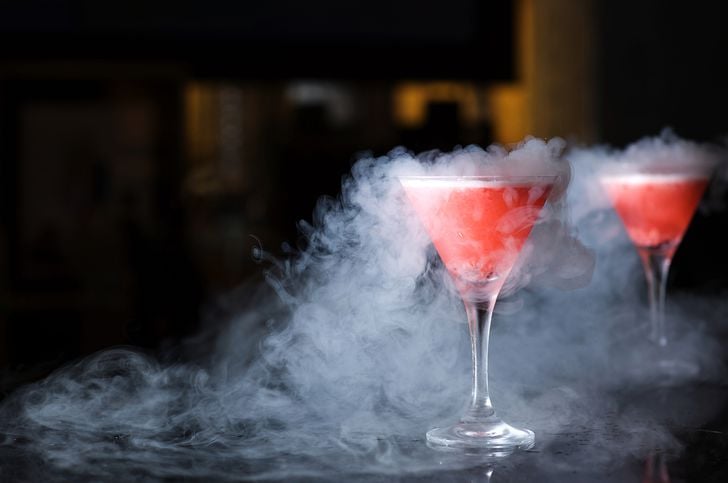 Written by: Susan B. Barnes

Sailing aboard the inaugural voyage of the new Disney Wish this summer, one of the cocktails that caught my eye in Nightingale’s, the intimate onboard piano bar, featured a smoke bubble sitting atop a purple drink served in an elegant coupe. Looking at the cocktail menu, I spotted the Butterfly Smoke Bubble and placed my order. The blend of Bombay Sapphire, butterfly pea tea and citrus was delightful, as was the scent-infused smoke bubble when it burst at first sip.

Smoke On The Water

A few months later, I sailed aboard Princess Cruises’ Royal Princess and was delighted once again to see a smoke bubble cocktail on the menu at Crooners. Delnah, a mixologist and server in Crooners, perfected her bubble making skills to the delight of our group and the other guests who watched her put the finishing touch on the Violet Cloud, a light cocktail with a rosemary-scented smoke bubble floating on top.

“Being part of the Princess family as a mixologist, I want to smash your concept of what a cocktail can be — to make beverages such an experience you can’t wait to try it again and tell all your friends,” says Rob Floyd, Princess Cruises’ master mixology partner. “The Violet Cloud is just like that,” he continues. “A beautiful base of a cocktail that is delicious and easy to execute. Then putting a large scented bubble over top of the cocktail that you pop with your nose really puts a smile on my face.”

Smoke Bubbles Are Bubbling Up

Curious about smoke bubble cocktails, I reached out to Debbi Peek, a Tampa-based independent spirts and beverage consultant who works with brands to develop cocktails for national restaurant groups. Peek recalls first seeing smoke bubble cocktails at mixology competitions in Europe about two years ago, noting that her European colleagues were creating extravagant garnishes well before her U.S. counterparts. “When you see a trend, it happens in Europe first, then arrives in the U.S. about two years later,” says Peek. “Even the tiki trend didn’t happen here [in the U.S.] until it was already finished in Europe.”

She says that the trend of smoke bubble cocktails likely evolved from a wide variety of smoked cocktails created with wood and real smoke, and restaurants were shying away from fire. “This [the smoke bubble] is a way to do the smoke without fire, but in a cool way — you have the idea of the smoke experience, and it’s theatrical,” Peek says, adding that guests will see “…a bubble walking by” and be intrigued enough to order.

Asked about the smoke bubbles themselves and how they’re made, Peek points to the Flavour Blaster, the “gun” that’s used to make the bubbles. The blaster costs about $400, and there are 15 different scents of essential oils from which to choose. Through its technology, the blaster creates smoke bubbles out of the oil. “It’s an expensive tool, but if you think about how many cocktails you’re going to sell from just the show of it, even if it doesn’t taste good, it’ll pay off,” Peek says with a chuckle.

Not only is the smoke bubble fun, but it enhances the drink experience, too. “Seventy-five percent of taste comes from smell,” says Peek. “We think we’re tasting whatever the scent is inside the bubble, but that ingredient isn’t necessarily in the cocktail.” Take the rosemary-scented essential oil smoke bubble like that served atop Princess Cruises’ Violet Cloud.

“We think we’re tasting rosemary [from the smoke bubble burst], but it’s not actually an ingredient in the cocktail itself,” says Peek. “Your mind thinks you’re really tasting rosemary, when in actuality you’re smelling it.”

Another attraction of a smoke bubble instead of traditional smoked cocktails is that the smoke from traditionally smoked cocktails tends to linger in the air, and “makes everything taste like smoke,” says Peek. “I don’t actually want to taste smoke throughout my drink, and it’s going to make my food taste different.”

She adds that the idea behind the Flavour Blaster and smoke bubble cocktails is that there is still a theatrical, mystical smoke, but it’s more palatable for people. “Not many people like the taste of smoke,” Peek adds.

Smoke bubble cocktails are still a bit of a novelty, but one spot on solid ground that’s serving is Four Flamingos, Chef Richard Blais’ restaurant inside the Hyatt Regency Grand Cypress in Orlando. Four Flamingos’ Roseberry Bomb is made with fresh strawberry-infused-in-house Ketel One Vodka, Crème de Peche and citrus, topped with a rosemary-infused smoke bubble and served with a fresh rosemary sprig. To find smoke bubble cocktails, look online to locate the mostly independent bars using the Flavour Blaster.

For the time being, Peek thinks that smoke bubble cocktails are more likely to pop up in modern mixology bars and contained settings like cruise ships before making it into the mainstream. “When I present it [smoke bubble cocktails] to national restaurant group clients, they say that they don’t know if they’re ready because they have to test it in all of their locations,” she explains, adding that each location needs its own Flavour Blasters and bar staffs will need training. Other options for making smoky bubbles do exist, but the Flavour Blaster is the easiest and most efficient. “Bubble cocktails will make mainstream and national accounts in probably two years,” surmises Peek.

We’ll drink to that!

Playful Christmas cocktails for your next holiday party

About the Author / Susan B. Barnes