Was 2021 the year of the entrepreneur?

Amid the beginning of the COVID-19 pandemic, the number of new U.S. business applications rose 25% between 2019 and 2020. To get a deeper understanding, LendingTree researchers examined the 100 metros with the most new business applications in 2020 to find the biggest — and smallest — year-over-year changes.

The findings showed that Memphis had the largest increase — 77.9% — in the number of business applications between 2019 and 2020. And only two of the metros examined had negative growth in this period.

Here’s what else researchers found.

Business applications up 25% in U.S.

According to data from the U.S. Census Bureau, the number of people filing the initial paperwork needed to start a business — which, in this case, is filing for an EIN — in the U.S. rose 25% from 2019 to 2020.

Keep in mind that some sole proprietors (think freelancers, financial planners and consultants) who don’t need to file for an EIN may not be reflected in the data. And not all the applications filed are guaranteed to progress into a business. For example, other steps may be necessary, like pitching investors, lining up suppliers or applying for a small business loan, which might keep some from turning their idea into a reality.

Another important factor is that the Census Bureau has some exclusions in its data. For example, the following aren’t included:

So while these figures are an indicator of the growing interest in starting a business in the U.S., they aren’t a direct reflection of new business growth. Another LendingTree survey found that a quarter of Americans considered starting a small business during the pandemic, and 64% of those folks made moves toward doing so.

Taking a closer look at the national data, there was a clear spike in applications in June 2020 — just a few months after the onset of the pandemic — with the numbers remaining elevated the rest of the year. 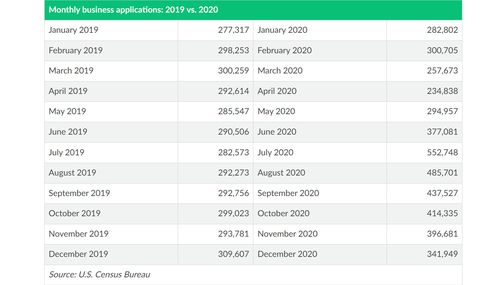 LendingTree chief credit analyst Matt Schulz says this spike in 2020 was likely a means for consumers to take control of their financial lives.

“The pandemic has created so much financial chaos for so many people, and that uncertainty surely spurred many Americans to take the plunge,” he says. “Some folks did it out of necessity because of income or job losses. Some folks did it to feel more secure, as the idea of relying on one source of income just didn’t make sense anymore for a lot of people. Others likely did it because they’d wanted to for years but never felt the time was right.”

The government relief checks and shutdowns could also have enabled some folks to seek this option, too, Schulz says.

“It’s a whole lot easier to take a risk when you feel your safety net is strong,” he says.

This jump in applications could have been in response to the stay-at-home order enforced by Memphis at the onset of the coronavirus outbreak. That order required residents to stay inside their homes as much as possible — including not going to work — unless they were considered essential workers.

Notably, Mobile, Alabama, was the only other metro area where the number of EIN filings exceeded 70% during this period. The city also had a stay-at-home order that limited people’s ability to work in a traditional setting, starting in April 2020.

Overall, the South seems to be a hotspot for potential business formation, as nine of the top 10 metros for growth in business applications from 2019 to 2020 were in the South. Only Cleveland, in the Midwest, broke that trend.

Only 2 metros with most applications saw negative growth

Provo operated under a stay-at-home directive early in the pandemic but didn’t have a shelter-in-place order. That directed Utah residents to stay home as much as they could and work from home whenever possible. Businesses that remained open were also required to follow hygiene policies and enforce social distancing.

Keep in mind that while Provo is one of two areas where the numbers dropped year over year, it’s still one of the 100 metros that saw the most interest in starting a small business overall.

The COVID-19 restrictions in Boise resembled those in Provo. And Idaho residents were required to stay home as much as possible, and employers in nonessential services were also required to accommodate people working from home, starting at the end of March 2020.

Looking at the bottom 10 areas for business application growth, two more Utah metros made the list: Salt Lake City (1.3%) and Ogden-Clearfield (5.8%). In fact, six of the bottom 10 metros were in the West. There were also three metros from the Northeast.

The retail trade sector (59.7%) had the biggest growth in business applications from 2019 to 2020. This didn’t surprise Schulz.

“So many companies have made it so easy to sell online that people feel good about taking the plunge,” he says. “Setting up an online store is generally simpler, quicker and less expensive than ever, so the barriers to entry that once scared potential entrepreneurs away from opening a new store aren’t the obstacles that they once were.” 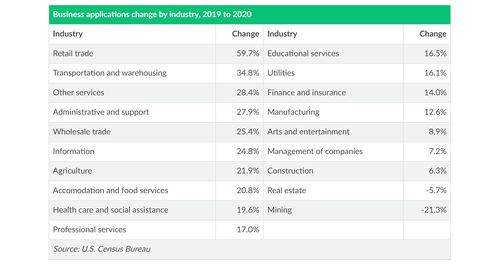 Interestingly, while e-commerce purchases peaked in April 2020, they still only accounted for about 19% of retail sales overall, according to data from the National Retail Federation. In fact, in-store purchases remained relatively stable after the first three months of the pandemic. This could have led prospective business owners to see the retail industry as a safe bet, even during turbulent times.

At the other end of the spectrum, business applications for new mining businesses decreased 21.3% over the observed period. Mining and real estate were the only two industries to see negative growth from 2019 to 2020. Both industries saw difficulties adjusting to the restrictions that came with the pandemic. For example, the U.S. mining industry lost about $1.5 billion in revenue in 2020 compared to 2019. Real estate also took a significant hit, particularly during April and May 2020, when sales resembled the 2007 and 2008 financial crisis levels.

What’s happening with business applications in 2021?

LendingTree focused on 2019 and 2020 because that was the latest available data from the U.S. Census Bureau on the metro level. 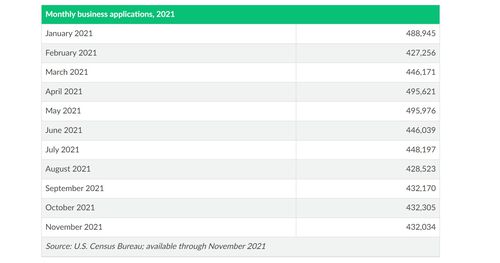 The Census Bureau is also officially tracking projected business formations as of December 2021. According to their projections, there should be a 0.3% increase in business formations within the U.S. over the next four quarters. That amounts to more than 30,000 new businesses.

For those who decide to take the plunge, obstacles can make it difficult to take things beyond that first application. But with proper planning, like conducting market research, looking for recession- and pandemic-proof industries, and creating a viable business plan, as well as looking into small business loans that suit your needs, it can be done.

And Schulz suspects that the upward application trend, a signal of optimism in these difficult times, will continue into 2022.

“The pandemic is still very much in effect, and millions of people are reassessing the way they live their lives,” he says. “In doing so, many Americans are taking a chance and starting a new business, either as their main job or as a side hustle. I expect that will continue for some time.”

LendingTree researchers analyzed U.S. Census Bureau Business Formation Statistics data to find the 100 metros with the most business applications in 2020 — the latest available on the metro level. Analysts then compared the number of people who filed for EINs in each metro in 2019 and 2020. The metros were ranked from highest to lowest based on percentage change.

This article
originally appeared on LendingTree.com and was
syndicated by MediaFeed.org.

15 expert secrets on how to grow your small business

Previous Story:
Is interest on your car loan tax deductible?
Next Story:
Here’s the antidote to a horrible work culture