Will 2024 be the year of the third-party candidate?

Anyone running as a third-party candidate or Independent for federal office in the U.S., let alone the presidency, is certainly facing long odds. Still, generations of Americans have not tired of trying. This includes Andrew Yang, who announced his new party, Forward, at the end of July and is tipped to launch a presidential campaign as well.

The run would be his second after an unsuccessful attempt at the Democratic nomination in 2020. Last year, Yang also dropped out of the New York City mayoral race after six months. According to Axios, the Forward Party is attempting to appear on 15 state-wide ballots in 2022 and expand that to ballots in all 50 states by 2024. 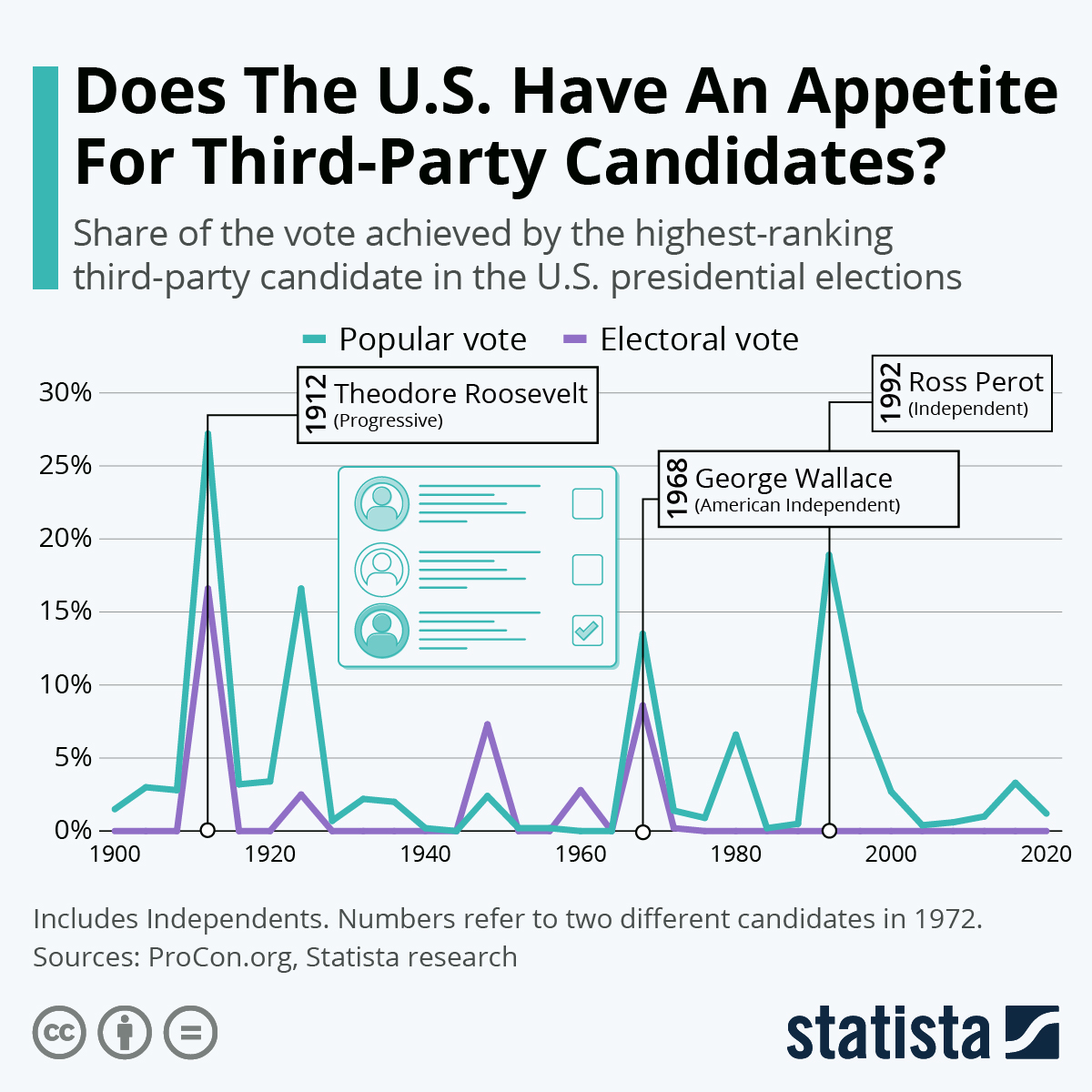 Yang’s decision to form a third party was widely condemned as anything from divisive to illusionary, but how far have third-party candidates come in the history of the United States? Their success has varied widely as has their ability to win electoral college votes. In the American statewide winner-takes-all system, the latter factor has often depended on whether candidates could mobilize voters regionally. More recent third-party candidates especially have faced this issue. In 1992, Independent Ross Perot received a whopping 18.9 percent of the popular vote, which translated into a resounding zero votes from electors. Perot won no state and came second in only two, Maine and Utah.

Earlier third-party candidates were somewhat better at garnering electoral college votes when their platforms aligned with regional – read: Southern – issues. George Wallace of the American Independent party won 13.5 percent of the popular vote and 46 electors (8.6 percent) in 1968 after campaigning against desegregation. He won five states – Arkansas, Louisiana, Alabama, Mississippi and Georgia – as well as one electoral college vote from North Carolina.

In 1948, “Dixiecrat” Strom Thurmond had been even more efficient at turning ballots into electors, winning 7.3 percent of the electoral college (39 votes) with a share of the popular vote of just 2.4 percent, as his supporters were concentrated in Louisiana, Alabama, Mississippi and South Carolina. Officially named the States’ Rights Democratic Party, the “Dixiecrats” also opposed racial integration.

The most successful presidential third-party candidate of the last century was actually Teddy Roosevelt for the Progressive party in 1912. After having completed two presidential terms between 1901 and 1909 for the Republicans, he came second after election winner, Democrat Woodrow Wilson, and won more than 27 percent of the popular vote as well as 88 electors (16.6 percent).

In a time before presidential term limits, Roosevelt sought a third term over a feud with his successor, Republican William Howard Taft, and an increasingly likely Democratic victory. However, in 1916, Roosevelt had reconsidered splitting the conservative vote and turned down the Progressive nomination.

The Progressive Party made a reappearance in 1924 when Robert La Follette won almost 17 percent of voters and 13 electors from his home state of Wisconsin – still fewer than the 15 electors Independent Harry F. Byrd earned in 1960 despite not having been on the ballot and having received no votes from the public. 14 unpledged and one unfaithful elector voted for him in yet another protest of desegregation.