1-in-3 Americans are boycotting businesses right now. Here’s why 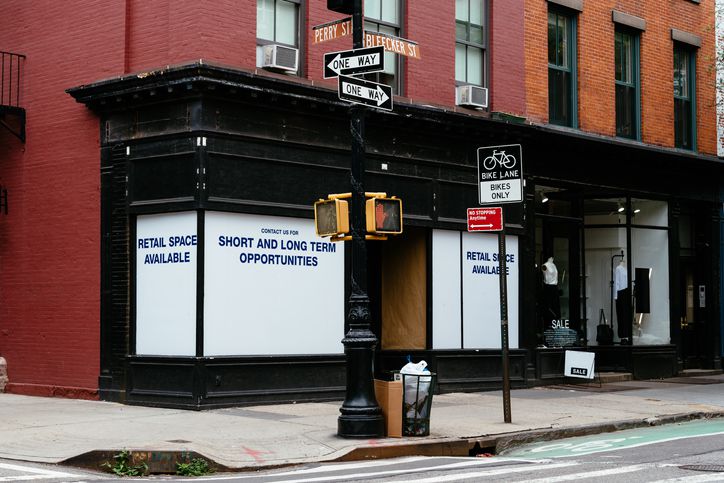 In business they say the customer is always right. For some consumers, that statement not only applies to customer service, but also describes their ideology on political and social issues.

A substantial percentage of consumers who feel that a company is behaving wrongly are willing to boycott that business, according to a new report from CompareCards.

The current coronavirus pandemic and recent protests against social injustice have given consumers even more of an incentive to express their disapproval with various businesses as they are among the reasons 38% of consumers are currently boycotting at least one company, up from 26% in 2019.

To gauge how far consumers would go to express their dissatisfaction with a company, CompareCards asked Americans whether they would boycott a company they had frequented in the past and what would make them do so. We asked what companies consumers were boycotting, whether they believed boycotts were effective and found that consumers see boycotts as a powerful catalyst for change as long as these tactics are used sparingly. 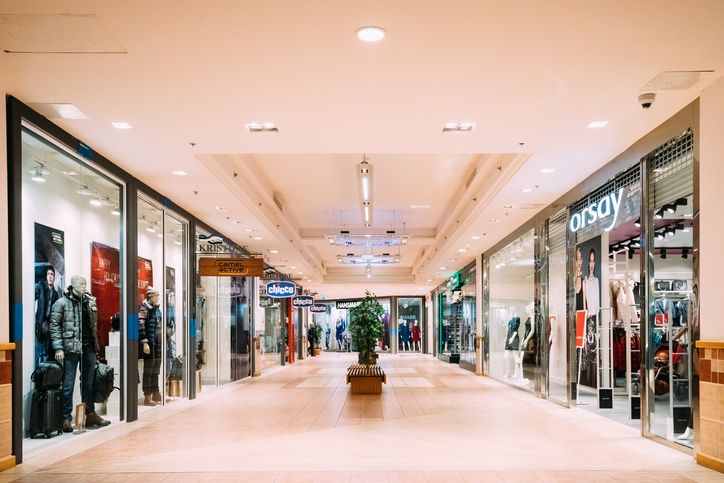 CompareCards commissioned Qualtrics to conduct an online survey of 1,026 Americans, with the sample base proportioned to represent the overall population. The survey was fielded July 10-13, 2020.

Generations are defined as the following ages in 2020:

Nearly 4-in-10 consumers are currently boycotting a company 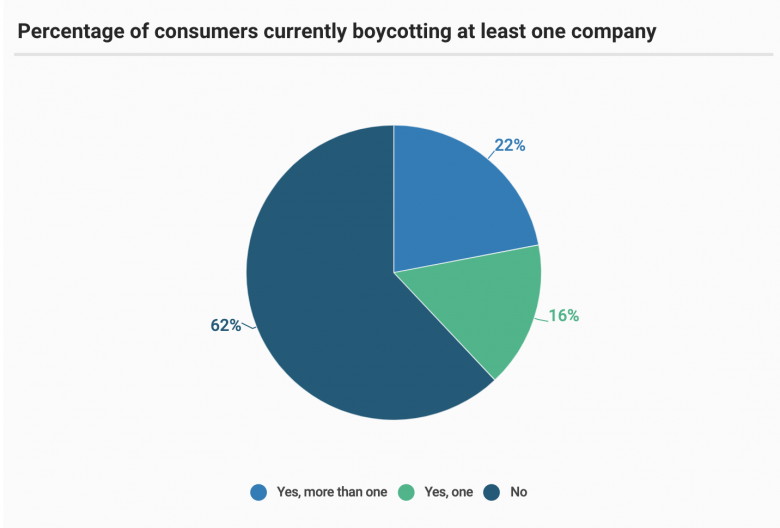 For consumers in the age of the COVID-19 crisis, patience with big business is not a virtue. When asked if they were currently boycotting a company they had spent money with in the past, nearly 4 in 10 (38%) of respondents said yes. Of those respondents, 22% said they were currently boycotting multiple companies and 16% had one company in their crosshair.

However, 1 in 4 respondents said they don’t believe in boycotts, proving the practice is not for everybody.

Gender, age and income differences among boycotters – but not political affiliation 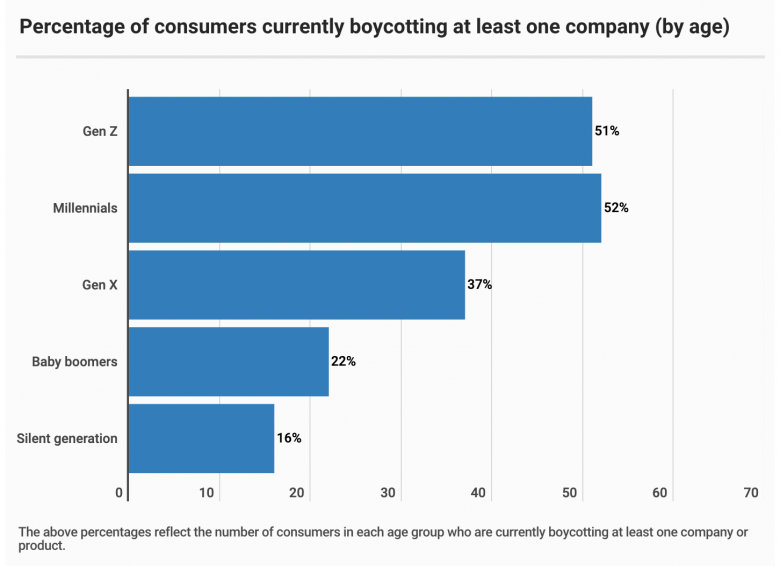 Younger consumers are more willing to use their dollars to make their preferences known.

While 51% of Gen Z consumers and 52% of millennials said they were currently boycotting a company, only 37% of Gen Xers, 22% of baby boomers and 16% of the silent generation said they were participating in a boycott.

Another recent CompareCards survey suggested Gen Z and millennials were also more likely than other generations to put their money behind their favorite political candidates and donate to a political campaign.

Income also plays a role in one’s likelihood to boycott with higher earners nearly twice as likely to hold back dollars to make a statement. In fact, 53% of those in households earning $100,000 or more said they were currently boycotting a company compared to 28% of those with a household income below $25,000.

The fact that higher earners are more likely to boycott than others should certainly catch the attention of businesses, says Matt Schulz, chief industry analyst for CompareCards.

“It’s one thing if a bunch of people with minimal buying power choose to boycott your company. It’s a completely different thing – and much more concerning financially – if the folks with the most money to spend, decide to boycott. That can take a much bigger total on the bottom line,” said Schulz.

There also appears to be a gender divide when it comes to taking a stance. Men are much more likely to be boycotting right now, with 49% of men boycotting one or more companies compared to 28% of women.

While many consumers are boycotting companies because they disagree with their political stance, members of one major political party weren’t much more likely to boycott than the other. In fact, 41% of Republicans are currently boycotting one or more companies compared to 40% of Democrats. Independents are slightly less likely to boycott, as just 36% are refusing to spend money on a company. 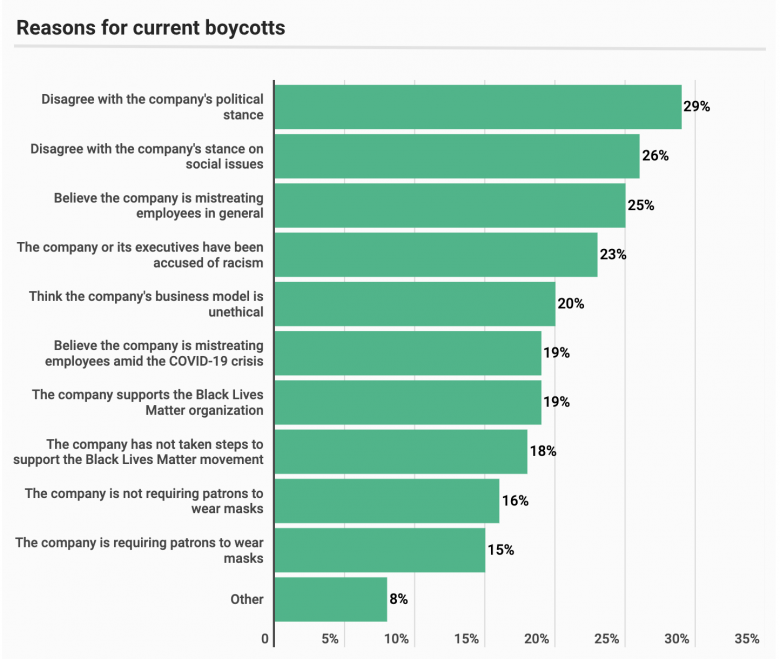 Only respondents who indicated they are currently boycotting at least one company answered this question. Respondents could select multiple reasons if applicable.

So what is making consumers get worked up enough to boycott?

The largest percentage currently boycotting (29%) are doing so because they disagree with the company’s political stance. “America is as polarized and politicized as it has ever been, and Americans often want to make a statement with what they watch, where they go and who they listen to. Millions of Americans are simply no longer willing to support a business that doesn’t align with their values,” said Schulz.

Some business policies are so polarizing that they are inspiring boycotts both for and against a particular issue.

Companies’ public stances and ethics matter to most 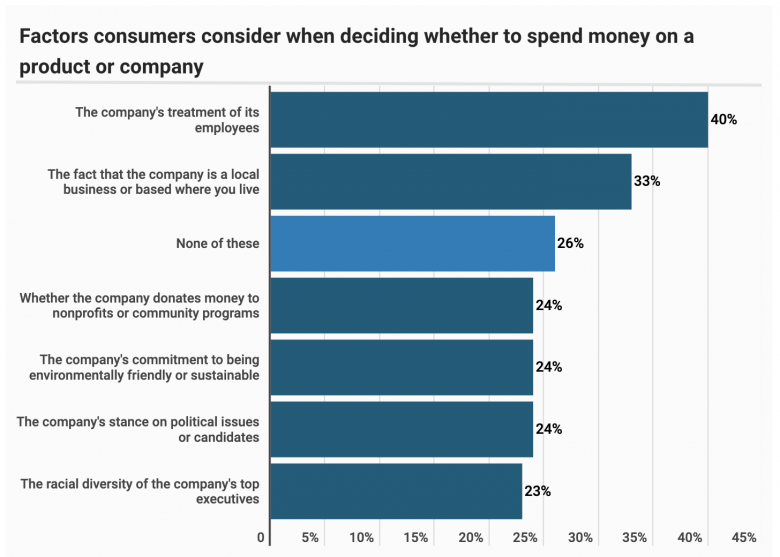 Even if consumers are otherwise happy with a company, many will turn their backs if the company treats its employees poorly or takes a public stance they don’t agree with.

When asked what plays a role in their financial support of a product or company, more than a third (40%) said the company’s treatment of its employees factors into their decision. Some are looking at whether a company gives diverse employees opportunities to advance. In fact, 23% said the racial diversity of the company’s top executives matters.

With the BLM movement shining a light on social injustice, 23% of consumers said they have taken proactive steps to shop from Black-owned brands within the past 60 days. Millennials were most likely to do this, with 37% saying they have patronized a Black-owned brand in the last two months.

More than a third (34%) of consumers said that while they have shopped as they normally do in recent weeks, they are open to patronizing Black-owned brands in the future.

When asked about other factors that play into consumers’ willingness to spend money with a company:

Slightly more than a quarter (26%) said none of the factors listed above influence their decision to patronize a particular business.

Nearly half (48%) of consumers have spent money on a product or company in the past year specifically because the company supported a cause or person they strongly agreed with. That’s especially true for millennials (65%) and those earning more than $100,000 per year (62%).

Also, 53% of respondents said they were more likely to buy from a company that gives to charities or supports causes they believe in.

On the other hand, some respondents would stop spending money with companies that support a cause or person they are not on board with. For example, 41% of credit cardholders said they would stop using their favorite card if the card issuer publicly supported a person or cause the cardholder strongly disagreed with. Such an action could even cost consumers money, particularly if they receive generous rewards by using that card.

Also, 41% said they would cut ties with their favorite retailer if it publicly supported something or someone they strongly disagreed with. 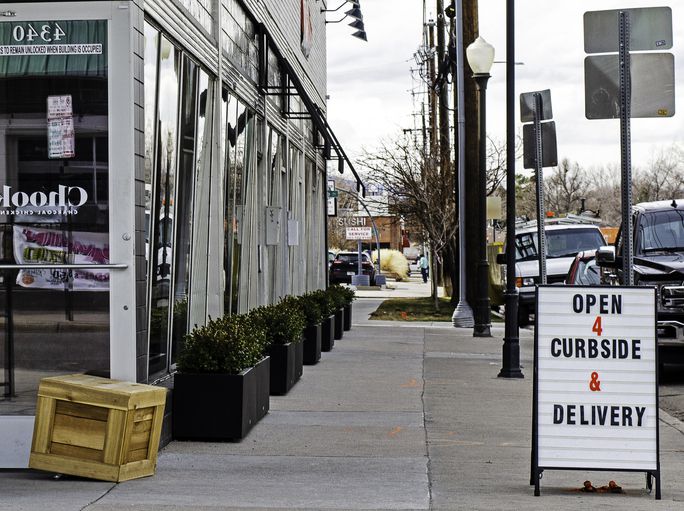 Consumers understand their dollars have power and are willing to withhold them from companies who mistreat employees and don’t share their political views. More than half of respondents (57%) said boycotts are an effective way to bring about change, but only when they aren’t executed too often. In fact, 54% said people can be too quick to recommend a boycott.

“We’re a divided country in so many ways and people seem to be becoming more emboldened in their beliefs and more willing to use their wallets to express them,” said Schulz.

*Editorial Note: The content of this article is based on the author’s opinions and recommendations alone. It has not been previewed, commissioned or otherwise endorsed by any credit card issuer. This site may be compensated through a credit card issuer partnership.

This article was last updated Jul 20, 2020. Terms and conditions may have changed. For the most accurate information, please consult the issuer website. 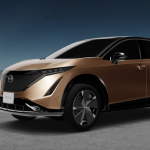 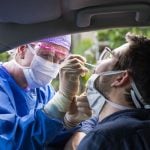