22 facts about Jeopardy that you probably don’t know 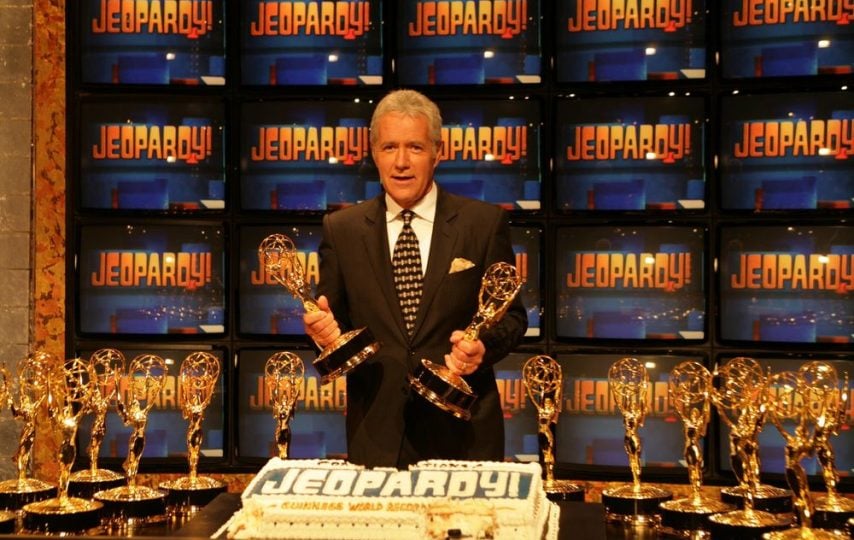 As Las Vegas professional sports gambler James Holzhauer etches his name into Jeopardy lore, we thought it would be fun to put together a list of Jeopardy trivia through the ages. Here are 22 things you may not know about the gameshow.

Alex Trebek’s full name is Giorgi Suka-Alex Trebek (George Alexander Trebek). His mother was French-Canadian, his father Ukrainian. He was born in Sudbury, Ontario on July 22nd, 1940 (he is currently 78).

As announced in March, Trebek is currently battling Stage IV pancreatic cancer. The most recent reports show Trebek is near remission.

Jeopardy films a week’s worth of episodes in one day. But Trebek changes suits (he says he has “about a hundred”) between each episode to maintain the illusion of time passing.

…but Jennings is not the biggest monetary winner. Brad Rutter holds the record for the most cash won by a single player: $4,688,436.

Although it’s never happened, the maximum winnable sum in a single game is $566,400. A single contestant would have to sweep both boards, find all three Daily Doubles – in the top tier and at the end of each round – make them true Daily Doubles and then wager everything in Final Jeopardy. Check out the Jeopardy Hall of Fame to see how top winners compare.

Jeopardy has won 34 Daytime Emmy Awards and a Peabody Award. That’s more than any other syndicated game show.

People who have competed on Jeopardy are ineligible for Wheel of Fortune, and vice versa. (They’re sister shows.)

Shifting rapidly between Jeopardy categories is known as “Forrest Bouncing.” Named for the 1986 Tournament of Champions winner and category-jumper Chuck Forrest, this unorthodox strategy is legal, yet is frowned upon by Jeopardy staff because it complicates production and confuses viewers.

The first three-way tie for the win happened on March 16, 2007, when all three contestants answered the Final Jeopardy question correctly with matching scores of $16,000 a piece. All were invited back to play the following week. Watch a clip from that episode here.

These days, a tie at the end of Final Jeopardy! sends the game into a tie-breaker clue.

Only 3 contestants in the history of Jeopardy have ever surpassed the five game mark: The most recent contestant is the currently streaking James Holzhauer, who was still competing at the time of this writing.

The Jeopardy theme song is called “Think!” The notorious earworm was written by show creator Merv Griffin, and was originally a lullaby for his son called “A Time For Tony.”

And that little song has earned Griffin $100 million. Even though he sold Merv Griffin Enterprises to Coca Cola in 1986 (for $250M!), Griffin retained the rights to “Think!” and receives a royalty every time it’s played – be it a rerun or foreign adaptation. Not bad for a ditty that he claims “took 30 seconds to write.”

During the first syndicated season of Jeopardy, the buzzers would sound when a contestant rang in. In 1985, producers decided to silence the buzzers because the noise was “too distracting” and kept interrupting the questions.

There is a Jeopardy staffer whose sole job is “button enabler.” This employee flips the switch that allows contestants to buzz in once Trebek is finished reading the answer. (Note the thin light strips on either side of the gameboard in the image above. These flash as soon as contestants are able to buzz in.)

Previous Story:
How to save money on summer superfoods

About the Author / Kristyn Pomranz