5 surprising signs you’re about to be scammed

We’re all too smart to fall for a scam…until we aren’t. From the moment we’re kids, we’re warned about people who mean us harm. But the phrase, “don’t take candy from strangers,” doesn’t just apply to children. Con artists are constantly honing their craft, so even adults need to be wary about scams or fraud.

Thieves have a seemingly endless amount of ways to try to part you or your family members from your hard-earned cash. Through identity theft, insurance fraud and mortgage scams, dishonest people may try to steal your money or assets. You could be romanced out of your money, or your parents could become victims of elder financial fraud. Ever since the pandemic began, coronavirus scams have also been a way for scammers to make money.

Because there are so many ways that swindlers can take advantage, it’s important to be able to identify the major red flags. Your guard should go up if you’re in any of the following situations.

Don’t Call Us, We’ll Call You

Be wary of strangers calling and requesting your financial information. You might think, “I wouldn’t fall for that,” but scammers are surprisingly successful when their request is accompanied by a logical reason. Take the fake front desk phone call scam, for instance.

Scammers sometimes call hotel rooms directly and pretend to be the front desk clerk. They proceed to tell you that there is a computer problem on their end, and that they need you to verify your credit card information on file.

While that may seem reasonable, it could be a scam. If this ever happens to you, we advise that you hang up the phone and call the front desk or speak with a hotel representative in person. That way, you can verify if there really is an issue with your credit card prior to providing your information.

NJ.com, a digital news content provider focusing on New Jersey, recently released an interesting article about a young woman who lost $1,000 in a Zelle scam.

The scammer impersonated a representative with the woman’s bank. He warned her about a fraudulent charge that was going to be processed on her account and came off as though he was trying to protect her from having her money stolen.

According to the article, the scammer provided the woman with detailed instructions, requesting that she enter a specific code into her PNC Zelle app, along with her first and last name and the word “reversal” on the Zelle memo.

Post hoc, this may sound ridiculous. Who would honestly fall for that? But keep in mind, you’re currently reading an article about scams. When you’re living your busy life, and you receive an urgent-sounding call from an alleged representative of your bank, you’ll be caught off guard and more vulnerable.

The red flag in this situation is that you’re being asked to do something that a large financial institution with the latest technology should be able to stop or reverse on its own. If you feel like you’re having to do all the hard work of stopping a digital criminal from robbing your online bank account, instead of the bank doing it, that’s the moment you should hang up the phone. Then you can call your bank yourself and see what’s up.

Part of the danger of a scam like this — one in which you’re tricked by a crook into willingly sending the thief money — is that it’s really not the bank’s fault. Legally, the bank doesn’t have to replace the money that was stolen. In this particular case, the bank, fearing bad publicity, refunded the woman $1,000. However, you may not be so fortunate.

Since we live so much of our lives online, we’re warned constantly about the dangers of clicking on the wrong link. Because of this, it’s easy to forget that you can be scammed face to face with a real life person.

Police in the state of Hawaii have warned the public about a scam where a stranger approaches somebody in a public area and shares a tale of woe. Their credit card no longer works and to fund their flight home, they’re selling their antique jewelry. Would you be interested in that deal? The answer is simply no. In July, a 62-year-old paid a 33-year-old an undisclosed amount of money for jewelry that was supposed to be 18-carat gold. After having it appraised, the man learned that it was all fake.

In the course of daily activities, we text the wrong person, or somebody accidentally texts us, and you exchange friendly banter about the mix up, usually ending there. In rare cases, though, these accidental texts lead to friendships.

Odds are, if you’ve developed a rapport with an accidental texter, you’re being ripped off. The Federal Communications Commission recently put out a warning to the public that scams from people texting people “accidentally” are on the rise. As the FCC’s warning states, scammers aren’t always after your money. Some of them “may simply be trying to collect personal information or confirm that a number is active for use in future scams.”

So if you’ve found an anonymous texter charming and fun to text, you may want to proceed cautiously. As the FCC states, “Scam text message senders want you to engage with them,” meaning, they’re more likely to be agreeable and pleasant conversationalists.

We’ve Never Met In Person, but Can You Send Some Cash?

Even if you’ve been dating somebody for a while, going to the movies or out to dinner, you may be hesitant if they ask you for a loan, but there’s a high likelihood that it isn’t a con. But if your relationship has existed entirely over technology, either by phone or computer, you’re likely being scammed.

Unfortunately, numerous people suffer from cases of broken hearts and bank accounts each year. Earlier this year, the Federal Trade Commission released a report that found that romance scams are the number one way that people are defrauded out of their money. In the past five years, Americans have lost $1.3 billion to romance scams.

An Alabama woman recently made headlines for being scammed by three different men who convinced her to send them $430,000 over eight years. That may sound unbelievable, but if you care about a person, it’s easy to see how you might give them money if you feel it will help them.

While it may be difficult to say no, you should not send money to any of your relationships that are entirely online. If that person really cares for you, they will completely understand and will find another way to solve their financial problem. And if they aren’t trying to scam you, but nonetheless give you a hard time for not sending them money, they aren’t worth your time.

People Approaching You About Money and Finances Is the Red Flag

Relationships are one of the most rewarding parts of life, so you shouldn’t fear intimacy or closeness. Rather, it’s important to be aware of red flags in relationships, like requesting money, refusing to meet in person or asking for your personal identification information.

This article originally appeared on Moneygeek.com and was syndicated by MediaFeed.org.

How to tell if you’re living beyond your means 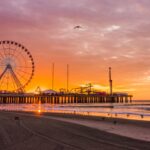 Previous Story:
8 beautiful beach towns where you can live dirt cheap
Next Story:
Great gifts for almost any occasion

About the Author / Geoff Williams