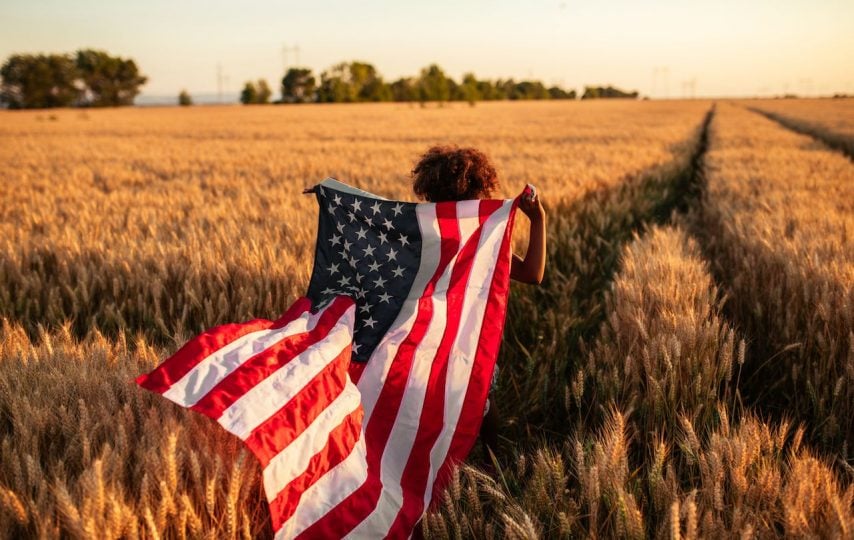 From eating acres of pizza each year to owning more guns than there are people in the country, there is a myriad of American facts that probably won’t surprise you, but are a good glimpse into what makes up American culture.

So, if you’re curious about how many Americans believe UFOs have landed on Earth or how much Netflix content Americans have watched during quarantine, keep reading.

1. A lot of Americans are homebodies

More than 40% of Americans have never left the country.

2. Some Americans are very grounded

13% of Americans have never flown in a plane.

The average American consumes 40 pounds of cheese every year.

Just 3.4% of Americans are vegetarian.

67% of American households have at least one pet.

More than nine in every 10 Americans eat pizza every month. Some estimates found that Americans eat about 100 acres of pizza daily.

The CDC found that about 84.8 million adult Americans eat fast food on any given day. That’s about 37% of the U.S. adult population.

10. We have more guns than citizens

USA Today found that, in the U.S., there are more guns than people. For every 100 people, there are about 101 guns.

11. A lot of us have German ancestors

About 43 million Americans identify as ancestrally German. That makes German the top nationality in the U.S.

12. Selfies didn’t start in America, but we love them

Americans read an average of 12 books per year. As such, the average American read four books in the past year.

14. Not very many of us own cryptocurrencies

10% of Americans own cryptocurrencies, which equals about 33 million Americans.

15. We all scream for ice cream

The average American eats more than 23 pounds of ice cream each year.

16. Nearly half of us are believers … in UFOs

Just under half of Americans believe UFOs exist and have landed on the Earth at some point.

17. We don’t travel a lot in our own country

54% of surveyed Americans have visited 10 states or fewer in the lifetimes.

18. A majority do not have a passport

Over half surveyed Americans said they don’t have a passport and never have had one.

19. We believe in ourselves

According to a Pew Research Center study, 57% of Americans believe that individuals control their own success. That’s more than any other county surveyed.

20. Only about a quarter have recently moved states

According to a Gallup poll, 24% of American adults have moved states within the last five years.

21. Nearly 1 million people have a heart attack every year

About 805,000 Americans have a heart attack every year. An estimated 605,000 of those have experienced a heart attack for the first time, and 200,000 have had one previously.

22. Two-thirds of us didn’t graduate college

According to the U.S. Census Bureau, more than one-third of America’s adult population has a bachelor’s degree.

Americans drink an average of 2.3 gallons of alcohol per year. That includes beer, wine and mixed beverages.

25. A large majority of Americans identify as straight

Americans spend an average of 6.31 hours on the internet daily.

27. More than half of Americans are Amazon Prime members

28. Some of us are addicted to the internet

26% of American adults say that they are ‘almost constantly’ online.

96% of Americans now own a cellphone.

31. Chicken is king in America

In 2019, the National Chicken Council found that Americans eat an average of  96.5 pounds of chicken per capita.

The typical American consumes 18 pounds of bacon each year.

33. We also love our waffles

34. Frozen fried chicken is a thing

36. Americans tend to carry a lot of debt

The average American has$6,194 in credit card debt.

38. A lot of American adults didn’t vote in the last election

Despite record voter turnout for the 2020 presidential election, about 80 million Americans didn’t vote.

39. There are still a lot of ‘underwater’ homeowners

About 14% of American homeowners (17 million) owe more on their home than it’s worth.

40. There are a LOT of McDonald’s employees (and former employees)

Some studies found that 1 out of every 8 Americans have worked at McDonald’s.

The typical American adult (over the age of 18) watches four hours of TV a day.

42. …and the pandemic has multiplied that

Some estimates say that Americans have watched a combined 203.8 million hours of Netflix each day since quarantine started.

The Washington Post found in 2019 that the average American has about five leisure hours a day.

44. …but little of it is spent on exercise

On the average day, the typical American woman gets 14 minutes of exercise, compared to 24 for men.

About 20% of Americans can speak two or more languages fluently.

The average American visits their doctor four times a year. That compares to 13 times a year in Japan.

47. Most of us have at least one cavity

91% of Americans over 20 have had at least one cavity.

48. Most of us live near where we were born

58.5% of Americans live in their home state.

49. Nearly half of us are married

50. Divorces are on the decline

This article was created and syndicated by MediaFeed.org.

Previous Story:
How much is my house worth?
Next Story:
Glimmers of hope for airport retailers