Despite COVID, people are still going to work sick. Here’s why

Paid time off (PTO) is an important consideration for workers, especially during a pandemic. MagnifyMoney surveyed more than 1,300 consumers to see who has PTO, how they get it and how they use it.

Amid a pandemic that poses new physical and mental health challenges, 45% of Americans report they’ve gone to work sick because they lacked PTO — and nearly a third (32%) of currently employed consumers don’t have PTO.

About a third of American workers don’t get PTO

Overall, about a third (32%) of currently employed workers don’t receive PTO for sick days or vacation. This is seen to varying degrees across income levels. While 20% of those who earn six figures or more don’t have PTO, Americans who earn the least — $35,000 or less annually — are the most likely not to get PTO (52%). Research shows that many employees classified as essential workers (in grocery, retail, agriculture, public transportation and other fields) earn low wages.

She notes that offering PTO can be advantageous to employers by contributing to employee retention and improved performance, a win-win policy. 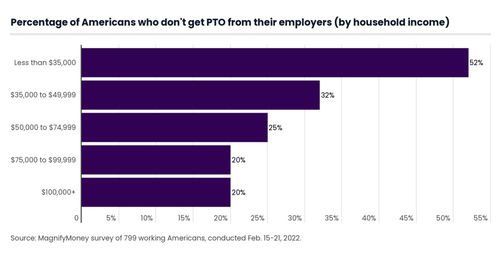 Here’s a full look by the various breakdowns among those who get PTO:

Working under the weather because of a lack of PTO

So, what consequences can this lack of PTO cause? About half of all Americans (45%) have gone to work while sick because they didn’t have PTO.

But despite many Americans working when sick (and some even taking on debt) due to a lack of PTO, only a relatively small percentage (18%) have left a position because of it. 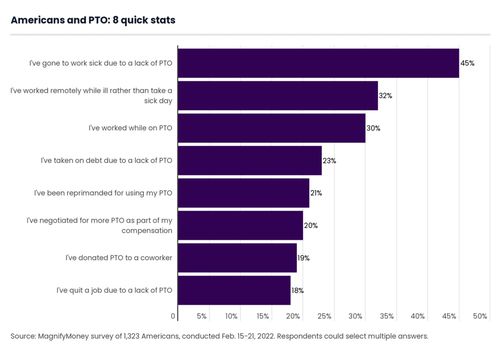 Members of the youngest generations — who are establishing their careers and, perhaps, their families — appear to struggle with a lack of PTO. 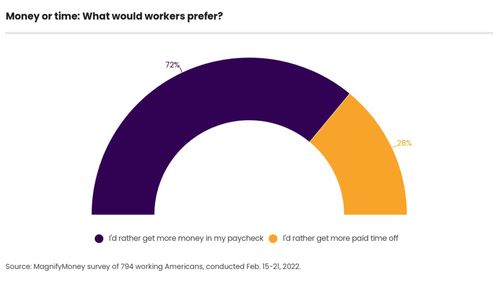 The groups with a larger desire for more PTO are:

The groups with less than a quarter of its members preferring PTO were:

Among the 45% of American workers who get a set number of PTO days and can roll them over unused days to the next year, 42% don’t use it, aiming for a cash payment when they leave the company.

On average, workers with PTO took 14 days off in 2021. Assuming a five-day workweek, Americans had about three weeks off during the year. Breaking that down, four were sick days, eight were vacation days and two were personal days (such as bereavement).

Across the demographics, here’s the time off that Americans are taking, when sick days and vacation and personal time are mixed:

Workers are split on how the pandemic impacted their time off: 26% take more PTO than pre-pandemic, while 25% take less.

Those taking more PTO now include:

That said, many Gen Zers could just be starting their careers and may not have been offered PTO before the pandemic.

Americans with unlimited PTO: Do they take advantage of it?

For those lucky Americans with unlimited vacation time, more than half (53%) say they take less time off than they would if they had a set number of days. Despite the generous nature of the policy, only 17% take more PTO than they would if their employers provided a limited amount of PTO.

“Culturally, Americans often don’t take all the vacation days they are owed, and when there is no clear number, they may take even less,” Mangla said.

She says the degree to which employees take advantage of unlimited PTO can depend on company culture, noting that there will sometimes be workers who abuse the policy. 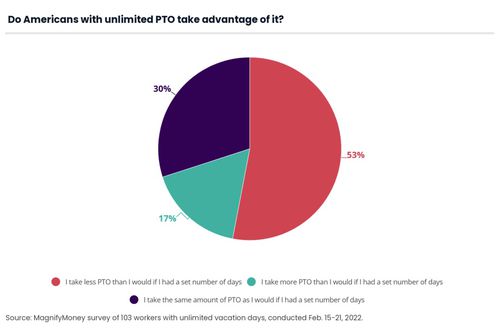 The groups who say they took less PTO than they might with a set amount include:

An overwhelming majority of Americans (97%) think employers should be required to provide employees with both paid sick leave and paid vacation.

Most think the minimum should be two weeks each, totaling 20 days of PTO. However, the second-largest group thinks that only one week each is sufficient, for a total of 10 PTO days in a year.

Only 5% of Americans think that unlimited vacation days should be standard, but that number rockets to 10% for unlimited sick days.

MagnifyMoney commissioned Qualtrics to conduct an online survey of 1,323 U.S. consumers (including 799 who are currently employed) from Feb. 15-21, 2022. The survey was administered using a nonprobability-based sample, and quotas were used to ensure the sample base represented the overall population. All responses were reviewed by researchers for quality control.

These 2 Western cities are the most financially fit in the US.

Previous Story:
Can this strategy help you save money on your mortgage?
Next Story:
Kristen Bell has an important PSA for LEGO fans

About the Author / Jenn Jones