Here’s how many Americas have died in mass shootings

The Buffalo supermarket shooting, the massacre of elementary school children in Uvalde, Texas, the attack on a doctor and bystanders in Tulsa, Oklahoma, and the workplace shooting at a Maryland concrete plant; mass shootings have dominated headlines in the United States and around the world for the past weeks. But beyond these highly publicized events, there are actually many more gun massacres that don’t make the front pages, highlighting the even larger extend of mass gun violence in the country. 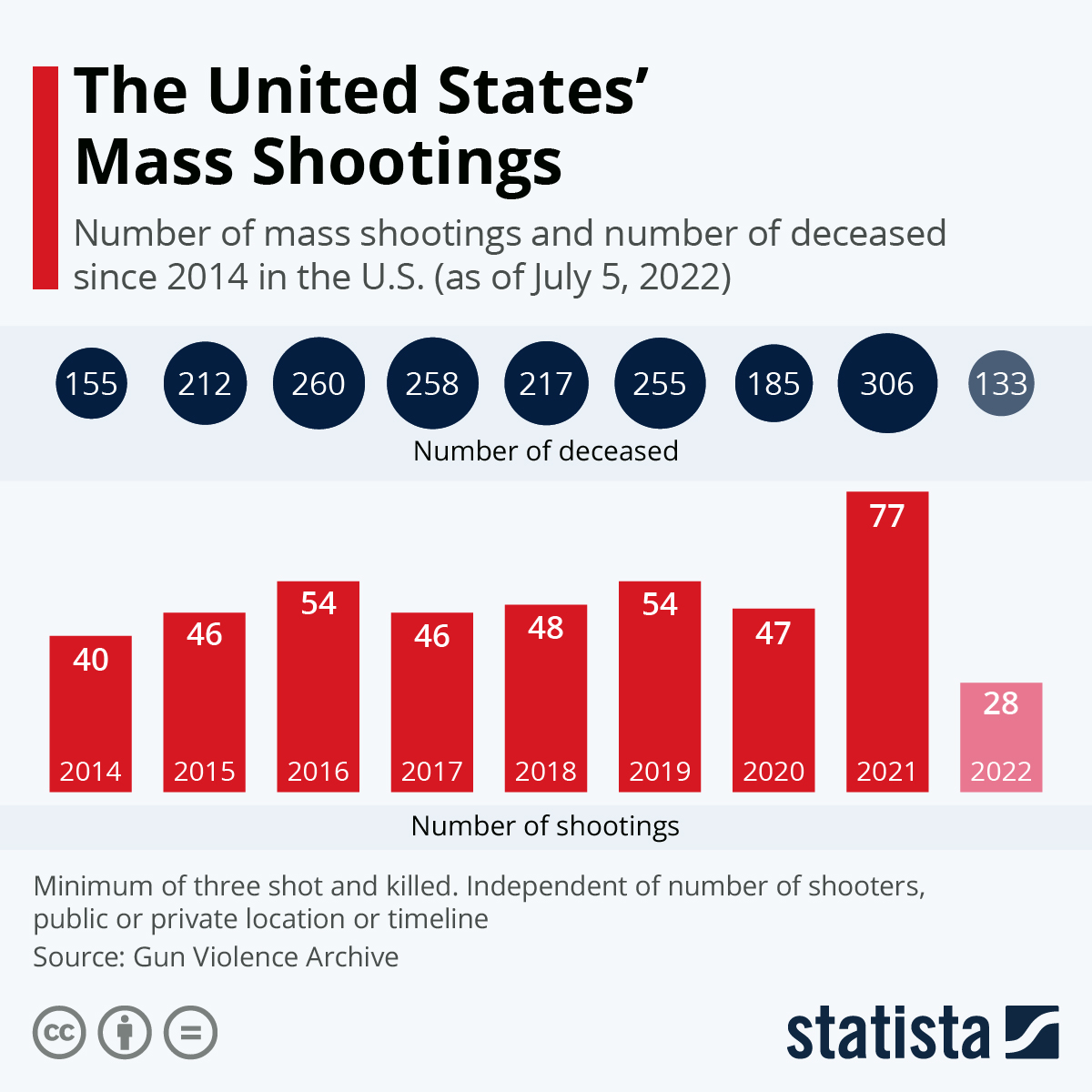 Lone-shooter events in public places that are carried out over short periods of time are typically those that make national news. A database curated by Mother Jones recorded five such shootings in 2022 so far; the above ones and a less publicized killing in which a father shot his three children and a minder at a visitation in a church near Sacramento, California, in February. Applying a threshold of three people killed similar to the one Mother Jones uses, data by Gun Violence Archive shows that a much higher 23 mass shootings have already taken place in the U.S. this year when considering all circumstances.

Even avid news readers have probably not heard about a shooting in Biloxi, Mississippi, on April 27 that according to local news outlet WLOX started as an argument between hotel staff and guests and left five dead including the shooter and a person he carjacked. On Feb. 5, a gunman shot seven and ended the life of five of his family members in Corsicana, Texas, before killing himself. The only coverage in non-local news came out of Canada and the UK. A Jan. 23 sextuple homicide in Milwaukee did eventually appear on national news. One shooter was arrested for what court documents allegedly call a botched drug robbery. A second shooter may still be at large.

While data by Mother Jones shows a significant dip in lone-shooter, public-setting mass shootings in the pandemic year of 2020, this is not the case for all gun deaths or even all mass shooting events. Violent gun deaths spiked 35 percent in 2020 and homicide numbers – which are shootings in 80 percent of cases – remained just as high in 2021 as they had been in the previous year. Mass shootings of any circumstance also peaked in 2021, a total of 77 were recorded by Gun Violence Archive, while the number of mass shootings in 2020 was about average.

While mass shootings in the U.S. killed an average of 55 to 230 people every year in roughly the past decade, depending on how they are defined, the number of all gun assault victims is much higher, having averaged around 14,500 annually over the same time period. In 2020, they even came close to 20,000.

Do you live in your state’s safest city?

Previous Story:
You have to see this glorious ancient forest in a Chinese sinkhole
Next Story:
Seniors, these 12 retirement mistakes could cost you big