This generation thinks they’ll be rich one day. Are they right?

Americans have encountered no shortage of financial hardships in recent years — but that hasn’t stopped Gen Zers from believing they’ll be rich one day. Despite job losses, rising inflation and global shortages, the youngest generation is overwhelmingly optimistic about its financial future, according to the latest MagnifyMoney survey of more than 2,000 consumers.

“We are surrounded by extremes of wealth and poverty, and I think younger folks naturally gravitate to the more positive extremes,” Mangla says. “What’s more, the concept of investing is so much more accessible today, and I know many Gen Zers believe they can harness the power of the market to build wealth.”

More than 4 in 10 (44%) Americans believe they’ll be wealthy one day. For Gen Zers (ages 18 to 25), that percentage skyrockets to 72% — making them the most financially optimistic generation.

High earners, on the other hand, double down on their financial pessimism. Three in 4 (75%) six-figure earners don’t think they’re wealthy, and 38% don’t believe they’ll ever be wealthy.

However, Americans are less financially optimistic than they were before the pandemic. More than half (51%) of Americans in 2019 said they’d be rich one day — 7 percentage points higher than today. Millennials  (ages 26 to 41), once the most financially optimistic generation, saw their expectations drop the most: 66% thought they’d be rich in 2019, but just 59% do now. 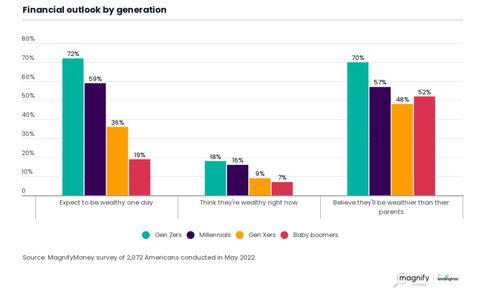 But what does ‘wealthy’ mean?

What it means to be rich may vary depending on who you ask, but most don’t necessarily associate wealthiness with extravagance.

In fact, the majority of Americans (55%) believe that wealth means living comfortably without worrying about finances. Meanwhile, 38% believe being wealthy means living debt-free — the third most common definition. 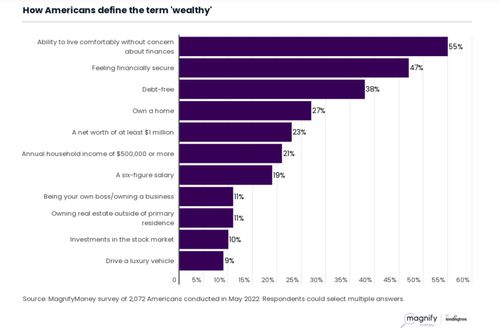 On the other hand, older generations are more inclined to associate wealth with high income. Nearly 1 in 4 (23%) baby boomers and 22% of Gen Xers believe wealthiness means earning $500,000 or more. Gen Zers and millennials, in contrast, are more likely to believe any six-figure salary counts.

With housing prices on the rise and homeownership seemingly further out of reach for many young Americans, the youngest generation is less likely to believe homeownership plays a role in wealth. Just 19% of Gen Zers think wealth means owning a home, compared with 31% of baby boomers.

Most say debt doesn’t factor into whether someone is wealthy

Although living debt-free is the third most common definition of wealthiness, more than half (62%) don’t consider it a factor. In fact, two-thirds (67%) of consumers say you can be wealthy and in debt, with baby boomers (70%) the most likely to agree.

However, what it means to be debt-free also depends on who you ask. Three in 10 (30%) respondents say you’re only wealthy if your debt is constricted to mortgages. 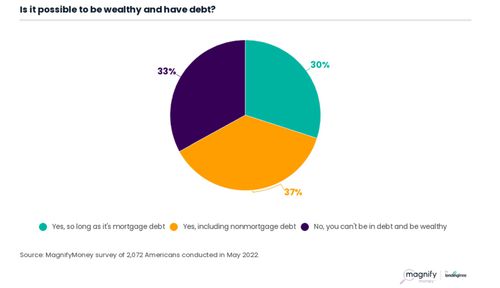 Mangla says that mortgages can often play a valuable role in wealth-building strategies, but distinguishing “good debt” from “bad debt” is crucial.

“Debt can really eat into your wealth-building — especially high-interest debt,” Mangla says. “But it’s not all bad. Most Americans can’t pay for a house outright, but homeownership has long been a part of wealth-building in this country. When you pay down a mortgage, you build equity. There are also some tax benefits to having a mortgage.”

The best ways to build wealth, according to Americans — and who’s doing it

When building wealth, Americans are most likely to believe that owning a home (27%) is the best strategy. While investing in the stock market is the second most popular option, Gen Z is the only generation to think it’s a better strategy than homeownership. In fact, 17% of Gen Zers believe investing in stocks is the best wealth-building strategy, compared with the 14% average across all Americans.

Mangla says Gen Zers are smart to focus on stocks.

“Yes, homeownership has traditionally been a part of asset-building for most Americans, but that is changing as the housing market changes,” Mangla says. “And homeownership does come with costs. Investing in low-cost index funds, however, has consistently proven to be the best way to build wealth over time.”

Among the wealth-building strategies Americans actively utilize, saving for retirement is the most popular choice. More than 3 in 10 (31%) Americans are saving for retirement as a wealth-building strategy, with consumers earning $100,000 or more the most likely to do so (54%). Gen Zers — many of whom may not yet have retirement options available through their employers — are the only group more likely to put money in an online savings account (26%) instead. 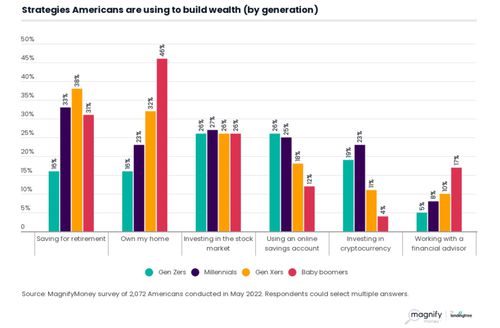 High earners are also overwhelmingly likely to invest in the stock market. More than half (51%) of consumers making $100,000 or more have money in stocks, tying with owning a home (51%) as the second most common wealth-building strategy among high earners.

Despite retirement being the most popular investment option for wealth-building, 41% of consumers who aren’t saving for retirement still believe they’ll become wealthy. Conversely, among those investing in wealth-building options, business owners (74%) and cryptocurrency investors (67%) are the most confident in their ability to become rich.

Notably, however, nearly a quarter (24%) of Americans currently aren’t using any wealth-building strategies.

Mangla attributes the higher rates of financial optimism to the advantages that generational wealth affords Americans.

“It’s a great source of inequality for this country,” Mangla says. “People with generational wealth have a huge head start on those who don’t. They’re set up to succeed.”

Among the advantages Americans from upper-middle-class backgrounds have, they’re the most likely to actively have money in investments. More than 8 in 10 (83%) of this group are investing in at least one wealth-building strategy — compared with 76% of those from lower-middle-class families and 67% from low-income families.

Generational wealth may also influence your social circle. Overall, Americans are most likely to be in similar financial situations as their friends (30%), but those who grew up with high-earning families are slightly more likely to hang out with other high-earners (33%).

Navigating wealth-building strategies may seem daunting, but having the right plan in place can be crucial for consumers who dream of being rich. Consider these four tips to build your wealth:

MagnifyMoney commissioned Qualtrics to conduct an online survey of 2,072 U.S. consumers, fielded May 6-10, 2022. The survey was administered using a nonprobability-based sample, and quotas were used to ensure the sample base represented the overall population. All responses were reviewed by researchers for quality control.

Previous Story:
You have to see this glorious ancient forest in a Chinese sinkhole
Next Story:
Seniors, these 12 retirement mistakes could cost you big

About the Author / Maggie Davis