Looking for an excuse to drink? This vodka could fight climate change!

Is it possible to drink away the climate crisis?

Air Company is attempting to find out. The company has developed a way to transform carbon dioxide into impurity-free alcohols, including vodka.

“We work with partners that capture that carbon dioxide before it’s emitted into the atmosphere, and then we use that CO2 in our process in creating the alcohols that we create,” Air Company CEO and co-founder Gregory Constantine told CNBC Monday. “It’s obviously far better for the planet in that we’re removing CO2 for every bottle that we’re creating.”

The company was founded in 2019 by Constantine and Dr. Stafford Sheehan, according to its website. It uses a patented and proprietary technology that mimics the process of photosynthesis by capturing carbon dioxide and transforming it into pure alcohols that only leave oxygen and water behind.

These alcohols are then used by the company to make eau de parfum, hand sanitizer and vodka. The process is not cheap, and the vodka retails for around $65 per bottle, according to CNBC.

Sheehan, who serves as the company’s chief technology officer, told Fast Company in 2021 that the decision to make vodka was a serendipitous one.

“We ended up targeting premium spirits because the ethanol that we were making was really, really high purity, and the place where you can recognize the benefits of that really high purity is in a really premium vodka,” he said.

The average bottle of vodka emits greenhouse gas emissions to produce, around 13 pounds of them.

But a bottle of Air Vodka actually helps remove about a pound of carbon dioxide from the atmosphere.

The vodka was released in New York right before the pandemic; when the first lockdown was announced, the company used its technology to make hand sanitizer.

“During the pandemic, we put out a sanitation product — a hand sanitizer that we’ve donated throughout New York and across the U.S.,” Constantine told TechCrunch.

Now, the vodka is on tap at New York bars like Bathtub Gin, where it is attracting positive attention, CNBC reported.

“Once we tell them, ’hey, this is how it’s made and it’s got a negative carbon footprint, all those really beautiful things, is what happens to make them want it even more,” Bathtub Gin beverage director and head bartender Brendan Bartley told CNBC.

The company recently raised $30 million in Series A funding from companies including Toyota Ventures, JetBlue Technology Ventures and Parley for the Oceans, TechCrunch reported. The funding will go towards building a third facility with the company’s largest carbon utilization system so far.

“Our immediate goal at Air Company is to further improve and scale our technology that converts carbon dioxide into the cleanest, lowest carbon intensity alcohols for consumer products, on the path to industrial applications,” Sheehan told TechCrunch. “Ultimately, we aim to truly have an impact toward addressing climate change by utilizing waste and atmospheric carbon dioxide to displace fossil fuels at-scale; replacing the carbon that we currently extract from the ground, with carbon removed from the air.”

“The funding that we’ve brought on is to really help scale those products to meet demand because we’re constantly selling out of all the products that we produce,” he told TechCrunch. 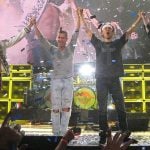 About the Author / Olivia Rosane