We recently got our hands on WWE 2K22 and we’re enjoying how it could define wrestling games for the future. However, that doesn’t necessarily mean we should forget about wrestling games from the past.

Granted, some of them were truly god-awful. WCW Nitro left a kind of bad aftertaste, along with the same level of reading a lower-grade Vince Russo script. And don’t even get us started on WCW Backstage Assault, which wandered so far from a popular business model that it became a joke in itself, kind of like World Championship Wrestling in its final years.

No, the games we’re talking about are the glorious Nintendo 64 wrestling games, when WWF Wrestlemania 2000 and WWF No Mercy ruled the roost with simple, fantastic gameplay and four-player support, so you could make those dream matches with your friends happen at any given time. Finally, we could settle the argument over who was better – The Rock or “Stone Cold” Steve Austin. (Of course, who are we to take sides since they’re both so awesome?). 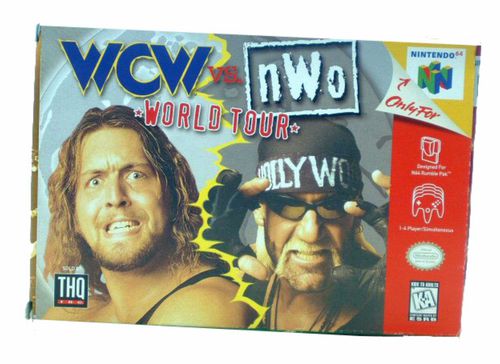 Where it all began, however, is with WCW vs. NWO World Tour, which came out for the Nintendo 64 during its heyday in 1997. This was all the wrestling joy that anyone needed at the time, featuring a number of popular superstars (at the time) from World Championship Wrestling, as well as a bunch of fictitious faces that made the roster even bigger than before, even if they weren’t nearly as recognizable as, say, Hollywood Hulk Hogan.

The game featured a number of popular names, including Hogan, Sting, “Nature Boy” Ric Flair and Eddie Guerrero, among others, even though they were barely recognizable with the N64 graphics filter. No matter – they looked like they knew how to wrestle, and for fans, that was certainly good enough.

In addition, wrestlers from the Dead Or Alive league (not to be confused with Tecmo’s fighting series), Independent Union and Whole World Wrestling, all fictional leagues, were also thrown in, adding some diversity to the line-up and giving fans a chance to topple a giant like, er, The Giant with the likes of Black Ninja or The Claw, Gran Naniwa. Take that, Giant!

Where WCW vs. NWO World Tour truly took off is with its modes. You could play single player through a series of matches, sure, but involving friends in a tag team match or even an all-out battle royal became the stuff of legend, as you flung each other around the ring using the wonderful control set-up employed by THQ and the combination of developers at Asmik Ace and AKI Corporation. It just felt right in every regard, from high-flying moves to nailing someone with a well-deserved pile driver.

Best of all, it was local. There was something about taking on your friends in the living room with a number of legends and newbies and coming up with the surprise victory in the process. Remember when Rey Mysterio pinned Kevin Nash out of nowhere? Kind of like that, but certainly on a more personable level.

Since that time, the formula has been well-copied with WCW/NWO Revenge, WWF Wrestlemania 2000, and WWF No Mercy, all effective in adding new tweaks and, more importantly, popular wrestlers, like “Stone Cold,” The Rock and The Hardy Boyz, among others. However, since that time, THQ lost its way, and even the likes of Acclaim tried to step up with its own wrestling line-up, failing miserably with WWF Attitude and (God help us) ECW Hardcore Revolution.

With WWE 2K22, 2K Sports is attempting to innovate, but nothing beats going back to that heyday of N64 wrestling games and enjoying a round. All of the games mentioned above in that era are still a lot of fun, even if some superstars have clearly retired or moved on. Maybe you can find an N64, four controllers, and a copy of one of those games for dirt cheap, around under $100 or so and experience the ’90s wrestling all over again. It’s so worth it, especially when you pin your friends with the likes of Rey Mysterio and prove that, yes, the little guys can get it done.

Check it out. But, again, avoid WCW Backstage Assault. We can’t warn you enough.

This article originally appeared on Gamerterra.com and was syndicated by MediaFeed.org.

Previous Story:
25 apps that you can use to score free food
Next Story:
Here’s where gas prices rose fastest in March