The history of the Zamboni, in pictures 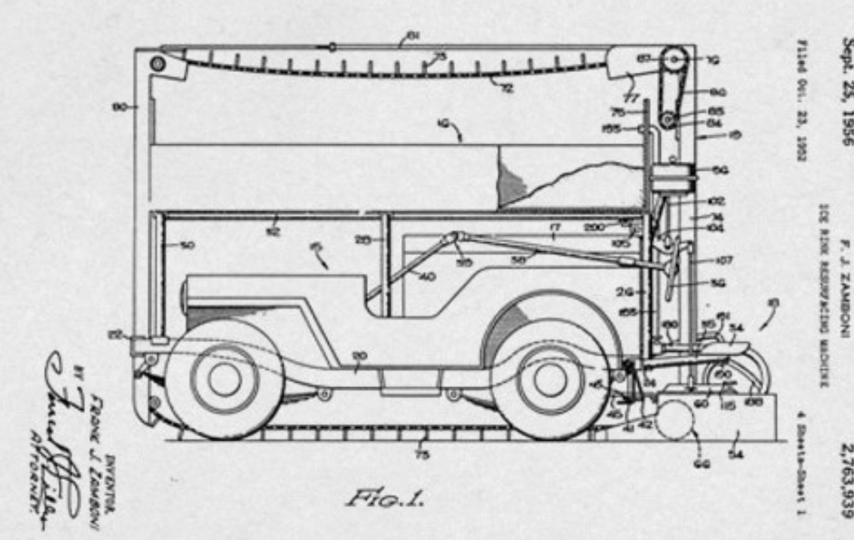 Some of the greatest inventions known to man were developed to solve fundamental problems. Some of those would achieve legendary status. The ice resurfacer, in its most basic descriptive name, no matter the manufacturer, is known to most everyone as the Zamboni. Strange name, eh?

Consider that the Zamboni was invented and used for a full 10 years before the first hockey goalie adapted a face mask. Yes, it can be said that goalies back in the day were a bit slower to innovation and would rather just take slap shots to the face. What’s even more strange, or not, is the fact that the Zamboni comes from the land of palm trees and movie stars. 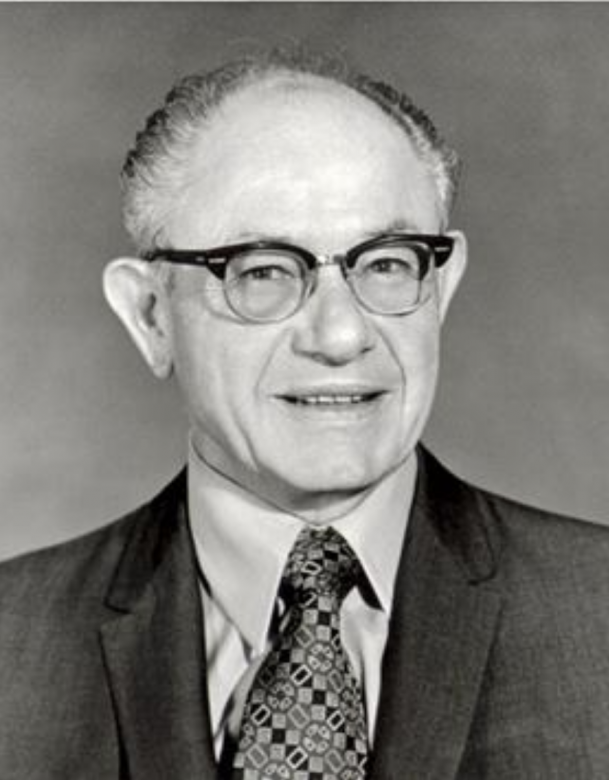 The Zamboni is named for its inventor. Frank Zamboni was born in Utah in 1901 to Italian immigrants. The family farmed in Idaho for a number of years, and then settled in the harbor district of Los Angeles. The former farmers were entrepreneurs. Frank’s brother, George, opened an auto repair shop. Frank went to trade school in Chicago and, after returning to LA, opened an electrical supply business with his brother Lawrence in 1922 in the city of Hynes, now known as Paramount.

Filling a local need, Lawrence and Frank went into the ice-block business in 1927. They created a plant with commercial refrigeration to produce the ice used by so many for “ice boxes” before the inception of consumer electrical refrigeration. By 1939, the widespread use of electric refrigeration at the consumer level was precluding the need for block ice. So Frank, Lawrence and cousin Pete Zamboni took the refrigeration equipment and opened Iceland, an ice-skating rink, in 1940. 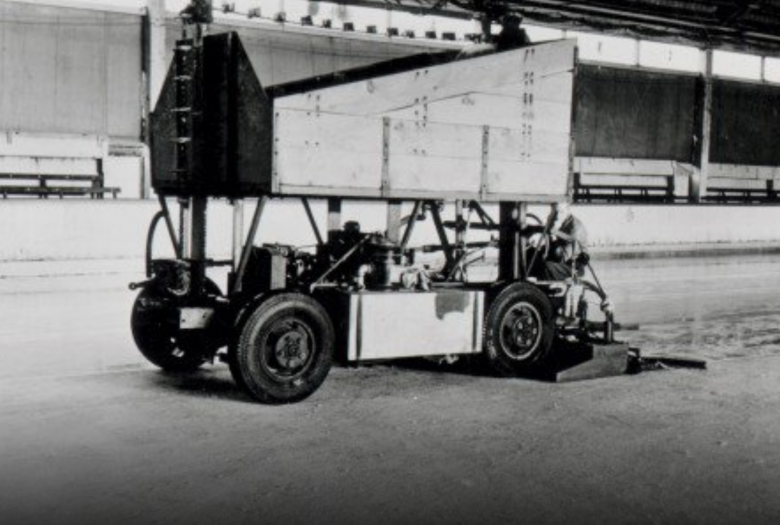 One of the biggest issues of maintaining a rink was the resurfacing of the ice. It was a 5-man, 90-minute job that involved scraping, washing and squeegeeing the surface.

Frank Zamboni, who already had invented a pipe system that eliminated rippling, spent several years working on a machine that change how ice rinks were resurfaced. By the time he was done, he held 15 US patents.

According to the Zamboni company, “The first Zamboni ice-resurfacing machine (built and used at the Paramount Iceland Skating Rink) had four-wheel drive and four-wheel steering on a hand-built chassis using war surplus (Willys Jeep) axles and engine parts. 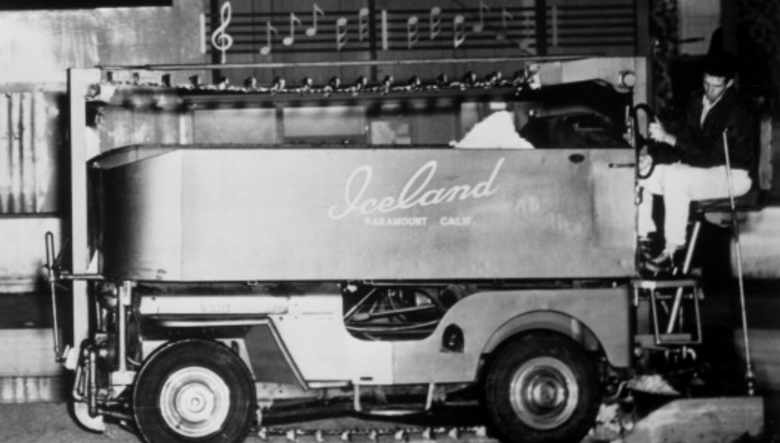 The Model A was built, tested, modified and retested at Paramount Iceland. A cover was added at the front over the conveyor chain to keep snow from falling onto the fresh ice surface. It also had an in-tank snow-melting system along with a wash water system.

Early photos of the machine show a different configuration of the large wooden snow tank, prior to its modification. The wooden side was hinged so snow could be shoveled out.” 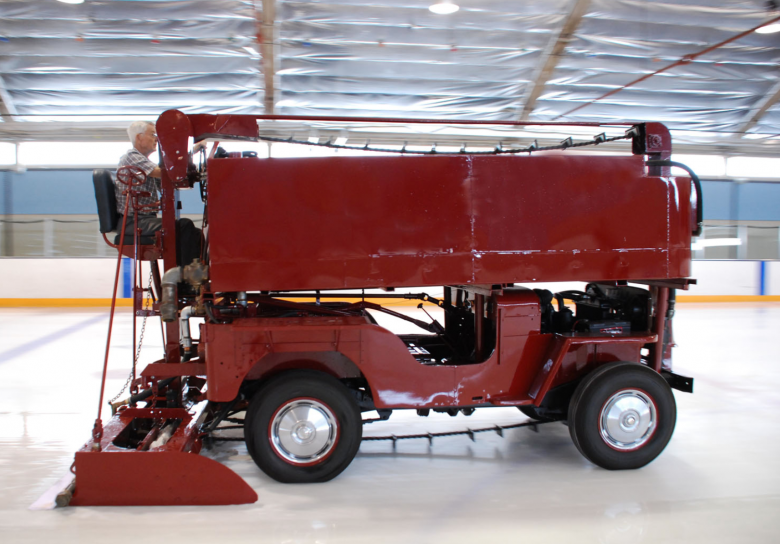 In 1949 Zamboni had a machine that, using just one person, could resurface an ice rink in 15 minutes. Word spread quickly. The machine was patented in 1953.

Saturday Matinee: The Golden Age of the British Sports Car 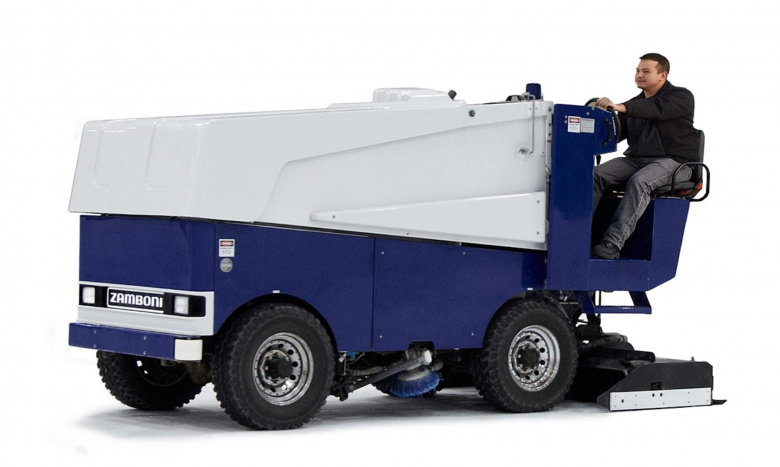 The family still runs the company, as well as the Iceland rink where it all started. The first Zambonis had Willys Jeep surplus engines. Today a variety of powertrains, including electric, is used.

The Zamboni company also tells a nearly disastrous story of Frank  Zamboni: “In a memorable incident, Frank drove one of his Model C machines 450 miles up the coast of California to (the) Berkeley Iceland (rink). Along the way, a key came out of the steering wheel shaft, and Frank lost steering control. The machine, with him driving, veered off into the oleander bushes on the highway median and stopped. Frank managed to get the key back into the shaft and proceeded on to deliver the machine.”

The rest, they say, is Zamboni history. We are kind of hoping to test drive one sometime. 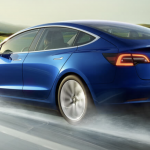 Previous Story:
These electric cars have the longest range 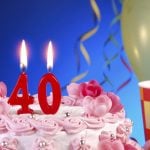 Next Story:
How much you should have saved by 40

About the Author / Tom Stahler