The ridiculous reasons so many Americans overspend

At some point or another, most — if not all — of us have felt the pressure to keep up with the Joneses.

According to a new LendingTree survey of nearly 1,600 U.S. consumers, almost 40% of Americans have overspent to impress someone else, especially on clothes, shoes or accessories. Feeling the need to overspend can be frustrating, which is especially true when the stakes are high. In fact, more than a quarter of those who overspent to impress others are currently struggling with debt because of those purchases.

Often, the key to breaking bad habits is awareness. We’ll look at how Americans are overspending to keep up.

Nearly 40% of Americans overspend to impress someone

“It’s certainly a cliché, but as you age, you’re often less concerned about what other people think of you,” LendingTree chief credit analyst Matt Schulz says. “You get more comfortable with who you are and spend less time worrying about other people’s perception of you.”

Despite the wide variations by age, there’s no gender divide — 38% of men have overspent to impress, versus 39% of women.

Why are people willing to overspend to impress others? The most common reasons are to feel “successful,” impress family or friends, reciprocate generosity or impress a date. 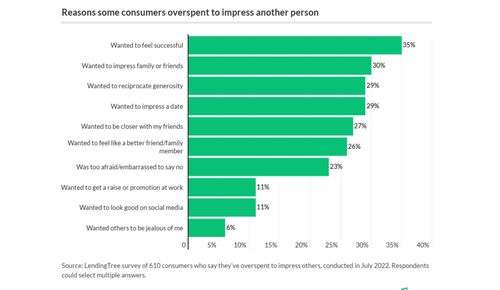 “There’s no question that the things we can buy can make us feel better about ourselves,” Schulz says. “That tailored suit, that shiny new car, those designer heels, those first-class tickets — they can bring an adrenaline rush that’s palpable and exhilarating. The problem is that those feelings usually fade fairly quickly, and people are often left with depreciating assets and debt in their wake.”

That said, Schulz says it’s OK to overspend a little on things that genuinely make you feel better about yourself or help you accomplish something you’re working toward.

“It’s just important not to overdo it so much that all the positivity is drowned in a sea of debt,” he says.

Here’s a look at why people tend to overspend to impress someone. 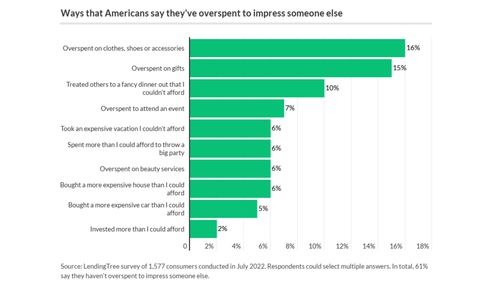 Where a gender divide arises is the more precise motivation behind overspending to impress. For example, 41% of men say they did so to impress a date, versus 17% of women. Additionally, women are twice as likely as men to say they overspent because they were afraid or embarrassed to say no (31% versus 15%).

Different income levels also have varying motivations. High income earners making $100,000 or more annually are especially likely to admit to overspending to feel successful. In fact, 52% within that bracket have spent more than they could afford to impress others, versus 32% who make $35,000 or less a year. Nearly 1 in 5 high income earners who overspent say they did so in hopes of getting a promotion or raise at work, versus 6% of the lowest earners.

Regarding generational divides, Gen Zers and millennials’ main reason for overspending is to feel successful, while Gen Xers want to feel like a better friend or family member and baby boomers want to reciprocate generosity.

Understandably, overspending can lead to regret. Most consumers (77%) who overspent to impress others wish they hadn’t. This was more common among Gen Zers (85%) and millennials (82%) than Gen Xers (74%) and baby boomers (60%).

The survey findings reveal two potential reasons for this regret: debt and estrangement.

First looking at bad feelings surrounding debt, 63% of those who overspent went into debt as a result. That breaks down to 27% who currently have debt associated with overspending and 36% who previously had debt. 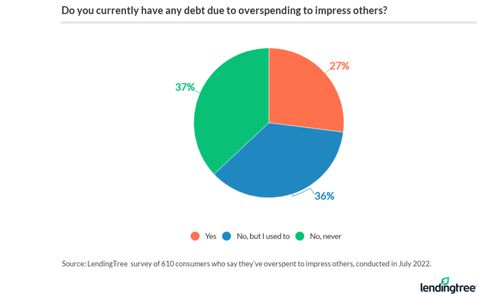 The other main reason people regret overspending is that 38% of those who did so aren’t in contact with at least one person they were trying to impress.

“People could certainly regret the overspending when their efforts to impress aren’t successful,” Schulz says. “If you take on a little bit of debt to show off in pursuit of a promotion, a partner or something else positive and it works, that’s an amazing feeling. But when you go out of your way and maybe even take a little risk to try to accomplish something or impress someone and it flops, it’s tough. It can lead to sadness, anger and regret.”

The pressure to keep up with others is real

We talked about consumers who spent more money than they could afford to impress dates or colleagues, but the desire to keep up with the Joneses often hits much closer to home — friends and family, to be specific.

While family members and friends are the primary people with which Americans want to keep up, this varies by generation. Once again, this drive to compete is more common with Gen Zers and millennials and less with Gen Xers and baby boomers.

To be clear, Schulz doesn’t believe this is just a Gen Z or millennial problem.

“Everyone wants to impress from time to time,” Schulz says. “However, many older Americans benefit from the experiences that they’ve had and the myriad mistakes they made in their 20s and 30s, so they may not be as likely to have those same issues going forward.” 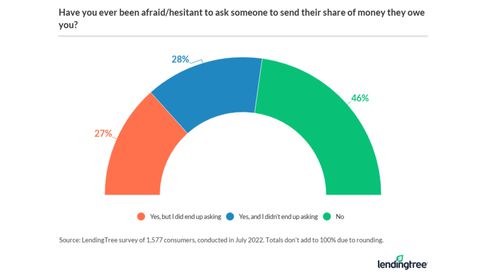 There aren’t surprising age and gender gaps around asking to be repaid. Our survey found that women (32%) are less likely to request money owed than men (23%).

“So many Americans are terrified of confrontation and avoid it at all costs, even if it ends up costing them money,” Schulz says. “It’s a shame because often you don’t have to do anything more than ask nicely and politely to get your way. It’s usually worth the risk and feeling of awkwardness that comes along with the ask.”

How to cope with the pressure to keep up with others

The pressure to keep up with the Joneses is fairly universal and isn’t likely to end anytime soon. When spending pressures to keep up with friends, family or colleagues arise, these are some ways you can cope that Schulz recommends.

LendingTree commissioned Qualtrics to conduct an online survey of 1,577 U.S. consumers ages 18 to 76 from July 26-29, 2022. The survey was administered using a nonprobability-based sample, and quotas were used to ensure the sample base represented the overall population. All responses were reviewed by researchers for quality control.

How to travel in luxury at a budget price

Previous Story:
Old-school career tips you should probably ignore
Next Story:
The states with the most car accidents may surprise you