The world’s oldest restaurant is in Spain. Take a peek inside

There are some remarkable restaurants around the globe, like an eatery in Norway that gives patrons amazing underwater views or one in Italy that’s nestled into the side of a cliff. But unless you have dined at a specific spot in Madrid, you have not yet eaten at the oldest continuously operating restaurant in the world.

In 1725, a French cook named Jean Botín and his wife, a woman from Spain’s Asturias region, opened Restaurante Botín in Calle de Cuchilleros, in the heart of Madrid near the Plaza Mayor. The building itself dates back to 1590, according to Guinness.

And while the restaurant is praised for its savory, succulent roast meats, it is the wood-burning oven that makes the establishment even more phenomenal.

“It is our jewel. Our crown jewel,” Luis Javier Sanchez, who is deputy manager of the restaurant and has worked there for 41 years, told Food & Wine in 2018. “The oven has been burning continuously for 293 years. I’ll repeat that: 293 years. We never put it out. It needs to keep hot at night and be ready to roast in the morning. That’s the reason why we must never put it out. There is a special aroma in there; it’s truly incredible.”

The restaurant recently shared a photo of the centuries-old fire burning in the oven on Facebook with the caption, “Nuestro horno de leña encendido desde 1725,” which loosely translates to, “Our wood-fired oven since 1725.” 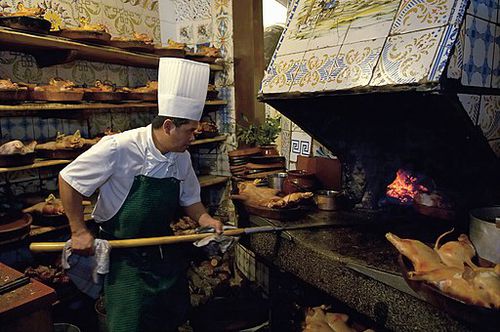 Founders Botín and his wife never had children, so when they passed away, Mrs. Botín’s nephew took over. The restaurant’s name was changed from Casa Botín to Sobrino de Botín (“nephew of Botín”). The eatery was first named the world’s oldest in the 1987 edition of Guinness’ record book.

Around the turn of the 20th century, Amparo Martín and her husband, Emilio González, took over the restaurant. At that time, Botín had just seven employees, including the couple and their three children. The family lived in the two floors above the business and used the wine cellar for storage.

During the Spanish Civil War in the 1930s, the restaurant became a dining room for members of the military. Following the war, the González’s sons took the reins and gradually renovated the restaurant into what it is today: four floors preserving the charming atmosphere of a traditional tavern.

This article originally appeared on Simplemost and was syndicated by MediaFeed.org.

Previous Story:
You can be financially free in your 40s & 50s. Here’s how
Next Story:
The secret way to save money on your wedding flowers