This is the #1 long-term risk for real estate investing

Real estate investing is a tough business. Stiff competition for deals, complicated legal and financing procedures, and the risks of problem renters have always meant that owning investment properties is not for the faint of heart.

Climate change is adding another layer of complexity to the challenge.

“You wouldn’t have even mentioned the costs of insurance in the past,” said Leo Sanchez, Mynd’s head of institutional acquisitions. “You would just think of it as a standard expense that gets deducted from your gross income as an investor.”

Those days are gone.

The global insurance and re-insurance giant Swiss Re, which is based in Switzerland, warns that by 2040, the cost of property lost to climate catastrophes, including floods, hurricanes, and wildfires, could climb by over 60 percent in the U.S.

Some homeowners and investors in areas that are especially vulnerable to climate threats have found that their insurance premiums have risen several times a year, or have spiked to unaffordable levels.

A Fox News report on rising costs cited a homeowner in San Mateo County, California (where wildfires have consistently made headlines), whose insurance policy had risen from $5,700 a year to a shocking $34,000.

Even worse, many have been dropped by their insurance carriers, and a New York Times article cites an insurance executive saying that in some places, homeowners can’t get insurance at all.

“I’ve been doing this for 13 years,” said Michelle Afflalo, a principal at Ives Insurance Services, an independent brokerage in San Diego, California. “It’s really changed. It used to be that I could give you an example of how Joe or Jim or Bob was dealing with this problem. Now, it’s, say, all of California, or even all of Arizona.”

Real estate investors are encouraged to target markets that are not on the front lines of climate change. But even so, according to one Motley Fool article: “Climate change poses a risk to homeowners in all 50 states, and could impact policyholders across the country.”

Sanchez employs all the tools that Mynd has to protect institutional investors.

“We use data and technology to navigate this complicated landscape,” he said, “and we leverage our proprietary platform to make sure their assets are a durable investment.”

The situation is tough now, and experts warn that it may only get worse.

“Climate change, let’s not make a mistake, is the number one long-term economic risk,” Jerome Haegeli, the group chief economist for Swiss Re, told a Tampa Bay Fox TV station in April.

It implemented a new pricing methodology that, as FEMA describes it, “leverages industry best practices and cutting-edge technology to enable FEMA to deliver rates that are actuarily sound, equitable, easier to understand and better reflect a property’s flood risk.”

Insurance rates have been rising, and that’s a trend that will only continue.

S&P Global Market Intelligence reports that in the first half of 2022, insurance carriers filed requests to increase their rates with the Department of Insurance in 43 states, and have been approved in almost every state, with an average rate increase of almost 4.5 percent.

Another analysis indicates that the average insurance cost climbed at a faster rate than even the historic rates of inflation in effect today, jumping upwards of 11 percent between 2017 and 2020.

Worldwide, property insurance premiums are predicted to increase by more than five percent annually through 2040, with climate risks being “a main driver,” according to Swiss Re. 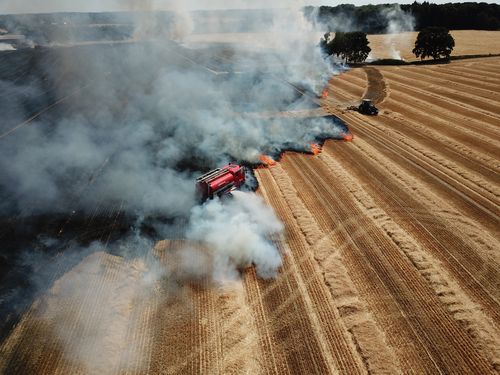 Warming’s impact is already being felt

The Paris Agreement, signed in the French capital by 196 parties at the United Nations Climate Change Conference in 2015, articulated a goal of limiting global warming to well below 2 degrees Celsius, and preferably to 1.5 degrees, compared to pre-industrial levels in order to avoid the most catastrophic impacts of climate change.

A May 2022 report by the World Meteorological Organization assessed a 50-50 chance of reaching that goal in the next five years.

Many areas throughout the U.S. are already experiencing profound changes.

And the Golden State’s fire season has extended beyond the traditional summer and fall timespan, with a fire in January 2022, typically the wet season, tearing through Big Sur, an event the National Weather Service described as “surreal.”

Coastal cities like Miami and San Francisco are under increasing threat of flooding, even on sunny days, because of sea level rise. The water level around Miami has risen about 12 inches over the past century, a very significant progression since many parts of the city rest only three or four feet above sea level.

On the West Coast, state Route 37, which links East Bay communities like Vallejo to the wine tourism areas of Napa and Sonoma, already closes nearly once a month due to flooding. The California State Transportation Agency predicts that the roadway may be entirely swamped by 2050.

The most active hurricane season on record occurred in 2020. For the first time, the authorities that name the storms had to resort to Greek letters like Eta, Theta and Iota. Hurricane Ida was one of the costliest storms in America’s history. The megadrought in the American Southwest, meanwhile, is the worst in some 1,200 years, according to a recent study.

Investing with an eye on risk

In view of the threats presented by climate change, investors might consider pulling in their horns and finding another place to invest their money.

But there are many things that property owners can do to protect themselves, according to Sanchez and Afflalo.

Investors should know what they’re getting into

The rising threats mean investors have to be more savvy than ever before about the risks they face.

Investors can use websites like Risk Factor, which gives information on the degree of risk of flood or fire for a given address, ZIP code, county, or city.

“Don’t buy property in areas that are prone to climate change threats if you’re not ready for it,” said Ives. “If you do, have a property management company like Mynd that makes sure there’s sufficient upkeep and insurance.”

Once a prospective investor is ready to buy a property, they definitely shouldn’t assume that the first policy they’re offered is the best one they can get.

“Be proactive and shop your insurance,” says Sanchez.

Afflalo urges investors to take a close look at the risks of flooding, even in areas designated as minimal risk, or “X” in the letter system that FEMA uses.

“People often don’t buy flood insurance unless the property is in an area designated as a flood zone,” said Afflalo, noting that standard insurance policies do not protect against outside water coming into the home.

“But floods increasingly happen in areas not designated as flood zones,” she added.

Investors may have to work with their insurance companies, taking measures to protect their homes to make them less risky for the insurance provider.

In areas that are vulnerable to fire, for example, insurance providers will expect property owners to create defensible space around their properties, ensuring that flammable brush is not in proximity to the property, use fireproof materials for walls or roofs, and install sprinkler systems.

In geographic areas that may be vulnerable to destructive storms, investors can choose to install weather-resistant windows.

When shopping for policies, investors should take a close look at the provisions for “reasonable and customary costs” for “ additional living expenses” in case of disaster.

If a home is destroyed, the residents have to find a place to live while the home is rebuilt. If that means a family has to stay in a hotel room during construction — especially during a pandemic, when labor and materials are harder to come by than normal — the cost may be considerable.

This article originally appeared on Mynd.co and was syndicated by MediaFeed.org

An insider’s guide to establishing yourself in real estate

Previous Story:
Returning to the office? It’s more expensive than when you left
Next Story:
Researchers think these apes could teach humans about peace & tolerance

About the Author / Brian Boucher