What investing experts get very wrong

Buy and hold. Expect an average 8% return. It’s impossible to outperform the stock market. You’ve probably heard of these investing truisms before, but what if they aren’t true?

Certified financial planner Stephen Spicer had been working with clients for years when he realized that common investing advice might not actually be what’s best. He discovered the strategy he was using for his own investment was radically different from what he was allowed to recommend to clients. Eventually, he left his firm and used his research on the investing industry to write Stop Investing Like They Tell You: Discover and Overcome the 16 Mainstream Myths Keeping You from True Financial Freedom.

In his book, he offers tips on how to build a strategy built on truth instead of fallacy. While the book originally came out in 2016, Spicer recently re-released an expanded version of it. We sat down with Spicer to chat about his book, financial influencers and how to fix a broken investing system. 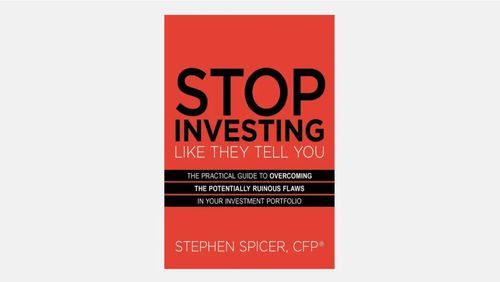 What made you decide it was the time to write a book?

I’ve spent more than a decade professionally practicing finance. I’ve read a lot of books over that time period and reached out to a lot of different publications trying to understand all of the strategies that are out there and trying to find the best ways to invest for myself and my clients.

Many of them talk about the same things, the same strategies, the same approaches. Over time, I found that wasn’t what my clients actually wanted, and after digging into research and logic behind that methodology, I found several flaws that were leaving my clients and myself exposed to risks that I didn’t want to be exposed to. So, I found better solutions, and once I had those, I looked around and realized all the books, people on TV, social media influencers talking about financial issues were regurgitating the same things. That was the impetus for, “I should take all of this research and put it into a book for those who are concerned like myself.” I really wanted to make it easier for them to have that information so they could form an educated conclusion.

Why do many financial experts repeat the same information? Is it out of sheer laziness?

That’s a deeper psychological question than I’m qualified to answer, but I do think it’s attributable to the human condition. We want heuristics, we want things to be easy, we want experts to tell us what to do.

The same information just keeps getting passed from one source to another. And I think that’s true for a lot of areas of life. It’s not a natural characteristic for most to challenge a status quo or authority or think critically about things we’re being told, especially when it’s not your area of expertise.

Financial influencers, many of whom have no formal credentials, are becoming more popular on social media. As someone who works as a financial professional, is it frustrating to see individuals like that get a platform?

Yes, it is, mostly because it’s the modern way that more and more people, especially the younger generations, are getting their information. To see them have this platform, and this influence, and have people listen to them and take their word as the authority or the expert … [that] makes it even harder to share a [different] message. There are so many more people who parrot the same things as the people before. It’s a really self-reinforcing model.

If you’re a 20-something or 30-something and you’re just trying to figure this stuff out, if you go online where most people are going, you’re going to find all of these people saying the same things. And it’s not bad that they’ve done research on their own, but they’re pulling from those same, old traditional sources without critically considering it for themselves.

My favorite myth is No. 10, that all the assumptions that we have today, that we build investing portfolios off of, is based on the limited amount of history that we have. We have about 150 years’ worth of data that we look at — logically, that’s not enough to draw a conclusion forever, into the future, of what will happen. It’s almost as though we are treating that information as guaranteed to tell us what will happen in the future.

I’m not a doomsayer. I’m not saying the whole stock market is going to come crashing down or that it won’t grow over the next however many decades. But what I am saying is that there’s a non-zero probability that something like that does happen.

When people are preparing for retirement or whatever goals they have, they’re basing their money off of the last 150 years, and they’re investing without downside protection in place or strategies to prepare for more extreme things that may happen. People are unnecessarily leaving themselves exposed. I know there are better ways to invest someone’s life savings then that stock and bond, buy and hold strategy.

Some people’s whole investing experience has been in a bull market. That’s not inherently bad, but they have no basis to go off of. It’s hard for them to know the psychology and emotions in place during other types of market scenarios.

What are some other aspects of the broken investing system you wish more individual investors knew about?

The most broken thing is the way that the system is self-reinforcing. We’re not doing new research; we’re not critically thinking about things. We’re just using that same old regurgitated information. It’s not inherently bad, but when you lose that ability to critically think, you leave yourself exposed.

For many individual investors, they do research online or seek a professional because they think that will give them the definitive answer. But if they don’t understand this regurgitated information is going on, they’re going to have to figure this out for themselves if they want to protect themselves.

Why does investing feel so inaccessible for many?

The advent of the discount brokerage firm has changed the industry and more people are investing, which contributes to an increasing bull market as more money flows into the market. That being said, it feels inaccessible because it is confusing.

It would be easier, and it is easier, to just buy into the common idioms of investing. But when the market gets shaky, people start to question that. They realize that maybe what happened in the past may not happen in the same way in the future. But no one thinks about that when things are going well. It’s so much easier to plug into that system.

I’m also muddying the waters because I’m telling people they need to think a little more about it and care a little bit more about it. A lot of people don’t want to do that. It’s stressful, and it’s not their main focus. If it’s not your passion, this stuff stresses you out. It’s boring, and you don’t want there to be a problem.

This article originally appeared on Policygenius.com and was syndicated by MediaFeed.org.

Previous Story:
Behold: The Popeyes fried chicken challenge
Next Story:
Oscar Mayer is selling bologna face masks and we don’t even know how to respond