Can you be sure you snagged the lowest mortgage rate possible if you didn’t compare offers from different lenders? For many American homeowners surveyed by LendingTree about their most recent homebuying experience, the answer is a resounding “yes.” In fact, 56% of homeowners say they accepted the first mortgage rate offer they received — and 48% of that group say they were confident they got the best rate.

But only 7% of homeowners who didn’t compare rates think shopping is too much of a hassle. So why are they willing to spend thousands, if not tens of thousands, of extra dollars on higher mortgage interest over the life of a loan because they didn’t get a second or third opinion?

LendingTree surveyed 1,055 U.S. homeowners to understand why some compare and save, while others believe they got the best rate without seeing competing loan estimates.

More than half of U.S. homeowners don’t shop for lowest mortgage rates, even though first offer not usually best

More than half of U.S. homeowners who took out a mortgage during their most recent homebuying experience say they didn’t shop around to find their best rate. 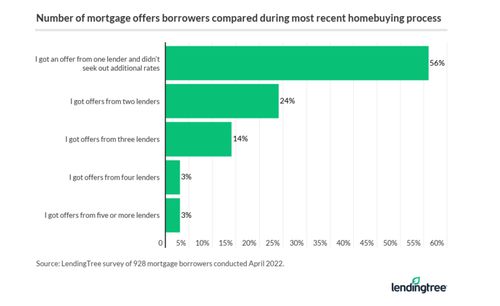 Nearly two-thirds (63%) of women say they took the first offer without checking other mortgage rate options, compared with 49% of men. Women were less likely than men to get at least two offers (21% versus 28%) and almost half as likely to review three (10% versus 17%).

Women may be hesitant to rate shop because they fear they can’t get a better deal.

“A fair amount of research suggests that women generally have a harder time securing loans — like mortgages — than men do,” says Jacob Channel, LendingTree senior economic analyst. “This excess difficulty may make women feel pressured into sticking with an offer because they’re worried that if they try to find a better lender, they could get stonewalled and not have any offers.”

Low-income borrowers are also less likely to shop around. Six in 10 homeowners who make less than $50,000 didn’t shop around, versus:

Still, regardless of the demographic, nearly half of respondents (48%) who didn’t shop around were confident they got the best rate despite not seeking other offers. Baby boomers (59%) were the most confident, followed by Gen Xers (50%) and millennials (36%).

Millennials who didn’t compare offers had the most anxiety about mortgage-rate shopping in a few areas:

Millennials may also be less likely to compare mortgage offers due to generational brand loyalty. “This loyalty, combined with a lack of experience in the housing market compared to their older peers, may push some millennials to stick with the bank they already know,” Channel says.

Homeowners may not realize that mortgage lenders offer different rates to borrowers. But there are savings to be had: In fact, 46% of homeowners who did compare found a better rate later. Just 27% of homeowners found the first rate to be the lowest. 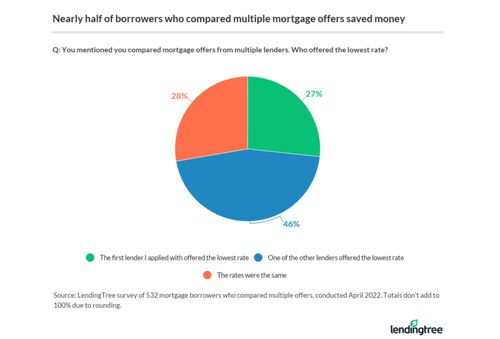 Nearly half of the men (46%) and women (45%) who compared the rates of more than one lender ended up getting a better deal than those who didn’t. Just over 1 in 4 male and female shoppers ended up with the lowest rate on the first try.

A third of homeowners say mortgage rates impacted their homebuying time frame, including 23% who bought a home earlier than planned to take advantage of low rates. 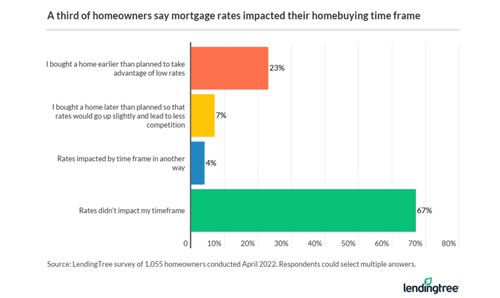 That figure spikes to 36% among millennials homebuyers who made an earlier home purchase because of the rate environment, compared with 19% of Gen Xers and 13% of baby boomers. Just 1% of baby boomers decided to wait out rising mortgage rates in hopes of decreased competition. But millennials were nearly three times as likely (13%) to delay their homebuying plans than Gen Xers (5%) to avoid a more competitive housing market.

Meanwhile, first-time homeowners (28%) were more likely to try to time their purchase based on interest rates compared to prior homeowners (18%). The rate environment was also a factor in earlier homebuying plans for new homeowners over the past five years:

Instead of trying to time the real estate market, Channel suggests focusing on whether buying a home makes sense based on your current finances, rather than rushing into homeownership for fear of missing out or waiting for a better deal that may never come.

Consumers generally rely on someone they know when getting a mortgage over online marketplaces or advertisements.

About a third (31%) of homeowners chose the mortgage company referred by their real estate agent to finance their home, followed by 25% who chose a bank they’ve already done business with. Another 12% relied on a recommendation from a loved one.

So, it aligns that 51% of mortgage borrowers met with a real estate agent before meeting with a bank. 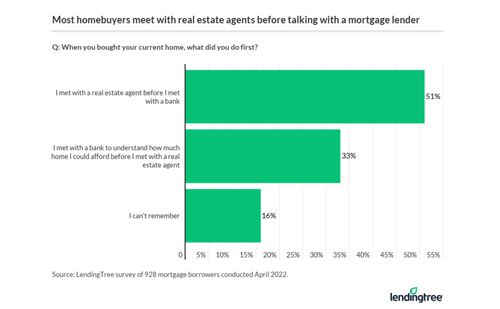 Although real estate agents may provide some comfort for stressed-out homeowners overwhelmed by the homebuying process, Channel warns against relying on them exclusively for mortgage guidance.

“Shopping around for a lender on your own instead of just relying on your agent’s word can help you get a lower rate and potentially even get a better sense of what you can afford,” Channel says.

Men (12%) were almost twice as likely to choose an online comparison marketplace than women (7%). Among age groups, millennials were most likely (12%) to use an internet shopping site, versus Gen Xers (9%) and baby boomers (6%).

Recent homeowners borrowed more to buy their homes, and are less likely to have benefited from a refinance

More than half (55%) of American homeowners with preapprovals to buy a home maxed theirs out. 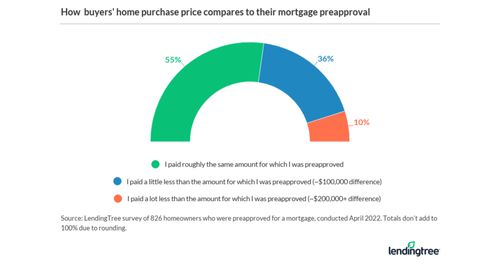 This figure jumped among homeowners who bought their home in the past year (70%) or past two years (61%).

But there can be a difference between the maximum for which you’re preapproved and the monthly payment you’re comfortable making. Consult a monthly payment calculator before you commit to borrowing the maximum preapproval amount. This way, you know exactly how your mortgage payment fits into your budget.

If you take a maximum approval and the payment becomes too much, refinancing could be an option.

Essentially, mortgage refinancing gives borrowers a chance to replace their current mortgage with a new loan with better terms. While average mortgage rates for 30-year loans continue to climb from 2020 and 2021 lows, refinancing could be good for people who took out mortgages before rates dropped.

The longer homeowners have lived in their homes, the more likely they were to have refinanced. Here’s the breakdown by the number of years owned:

Overall, 46% of homeowners who have taken out a mortgage and not yet paid it off have refinanced the mortgage for their current home.

LendingTree commissioned Qualtrics to conduct an online survey of 1,055 U.S. homeowners aged 18 to 76, fielded April 9-25, 2022. The survey was administered using a nonprobability-based sample, and quotas were used to ensure the sample base represented the overall population. All responses were reviewed by researchers for quality control.

While the survey also included homeowners from Generation Z (those 18 to 25), the sample size was too small to include findings related to that group in the generational breakdowns.

The US city that Boomer homebuyers are flocking to

Previous Story:
The American behavior that Covid completely changed
Next Story:
This financial expert wants to protect your money from your ‘lizard brain’

About the Author / Denny Ceizyk