One could argue that Jacksonville’s less-than-stellar reputation in pop culture (think cultural backwater populated by hillbillies, a city that couldn’t supply enough hotel rooms at the 2005 Super Bowl) has worked in its favor, with residents enjoying a pleasant and affordable quality of life in a river-and-ocean city well below the radar.

Now, with the national housing landscape having shifted to one of high panic over shrinking inventory, Jacksonville real estate has been discovered and the city is booming with sales and rentals that match or exceed the frenzy that has plagued other hot markets across the country.

But locals in the know would argue that there is still some runway before prices begin to match those of other in-demand cities, and Jacksonville remains a very good place to invest, provided a buyer is ready to wade into its hyper-competitive market.

The popular TV comedy series “The Good Place,” which ran from 2016-2020, was a relentless basher of Jacksonville. One of the show’s main characters, Jason, played by Manny Jacinto, was from the city, and his many misadventures provided ample fodder to fan the city’s reputation as profoundly backwards, in the classic hillbilly tradition.

According to the Tampa Bay Times, which memorialized the end of the series with an entire story about its jokes about the city, the comedy was rife with “one-liners hilariously thrown in to paint Jacksonville as a lawless swamp-city dominated by aspiring DJs and gator wranglers.”

The lackluster record of the Jacksonville Jaguars (Jason’s favorite team) was, predictably, a part of the running joke, to the point that when the Jags had an uncharacteristically good year in 2018, Jacinto became a kind of local hero.

An underestimated city hits its stride

All kidding aside, the city, and its real estate market, has long been underestimated, putting it in the position today where it is feeling the effects of a boom.

“Jacksonville has been undervalued for a very long time compared to the national numbers,” said Wendy Griffis, a Better Homes & Gardens realtor. “At one point you could buy a beautiful house on the ocean for a million; now that couldn’t happen.”

Lisa Pruitt has worked in real estate in the area since 1992 and has witnessed a shift.

“​​Our housing is more affordable than most parts of the country,” she said. “It’s a great place for investors to come in. It’s only to the locals that prices seem extremely high because of what we’re used to.”

“Last year I was telling buyers to bid 5 percent over and we would get it,” said Griffis. “Earlier this year I was saying 10 and was losing. Now I’m saying 15-20 percent. As a listing agent, I can see all the offers coming in and what it takes to win. In the last 30-60 days, 15 percent over is what it’s taking to win.”

Griffis notes that “100 people a week are moving to Jacksonville,” and data shows some 1,100 people moving to Florida. The city ranks #25 on The Street’s list of cities with the biggest influx of new residents in 2021.

But the demographics of new buyers has morphed considerably over the last few years, as they have in other Florida cities, such as Tampa and Orlando, and other hot markets across the South, like Atlanta, Charlotte, Raleigh and Dallas.

Pushpa Devi, a Jacksonville realtor for almost two decades, has seen the change.

“It started out that people from Miami were trying to get out of that craziness, looking here for properties,” she said. “Now it’s becoming all Northeast and West Coast people, selling their house for a million, and getting a house double the size for a million here.”

The mild weather doesn’t hurt. Pruitt points out that North Florida is more like southern Georgia than like southern Florida as far as climate, with a few seasonal changes, generally nothing below 50 degrees in the winter, and temperatures usually a bit cooler than the rest of the state in the summer.

Investors should be aware of the city’s flood risk, which the website Flood Factor (created by the nonprofit First Street Foundation) rates as moderate but increasing because of climate change. As an ABC TV affiliate reported, 29,000 properties had a 1 percent chance of being reached by floodwaters in 2020. By 2050, that number will rise to more than 47,000.

Since many areas are facing increased risks from rising, investors should weigh the pros and cons of investing in a flood zone and vet properties they are interested in; Flood Factor has a tool that can search homes by address to assess their flood risk. 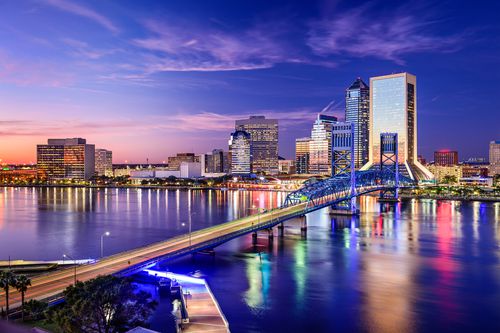 Jacksonville’s geography is defined by the Atlantic and the beach communities to the East; by the St. Johns River, which runs north-south through the city; and by the fact that it’s the sixth-largest city by area in the U.S., clocking in at a whopping 875 square miles.

Gary Sass is a member of the city’s Historical Society and owner of AdLib Tours.

“The good thing about Jacksonville is, it’s very spread out and each community has something different to offer,” he said.

“The bad part is that it’s very spread out, so if you’re trying to name it one thing, it’s very hard to describe,” he added. Despite its sprawl, locals are quick to mention that traffic isn’t much of a problem yet, and I-95 makes the city easy to navigate.

Devi notes that the city’s unique geography is a huge selling point.

“You have a city with a river going through it, plus an ocean,” she said. “It’s an interesting way to live; you can get property on the river and take a boat and go right out to the ocean. There aren’t a lot of cities in this type of weather that have all of that available.”

Florida’s best school district is St. Johns (spanning a good chunk from the beaches inland to the river), making it one of the most sought-after places in the city for families with school-age children.

Not surprisingly, according to Pruitt, “St. Johns county’s price point is through the roof right now.”

Riverside Avondale has been listed by the American Planners Association as one of America’s Top 10 neighborhoods, and Jacksonville boasts a fair number of these gems in its geographically sprawling metro area.

An intriguing history for a 200-year-old city

St. Augustine, the oldest city in the U.S., with a founding in 1565, is just south of Jacksonville, and Sass explains that the city shares some colonial history with that area, but none of it has survived. The founding of Jacksonville, which began as a Spanish territory, is recorded as 1822, so this June marks its bicentennial.

According to Sass, the city saw quite a few booms and busts, including a spike in population after the Civil War as soldiers who discovered the great weather migrated there, and the wealthy flocked to large hotels in the winter.

Concurrently, it became Florida’s banking and commerce center, until a fire in 1901 “destroyed the city in 8 hours,” notes Sass. By 1903 it had been rebuilt as one of the world’s most modern cities, and more commerce, including a thriving early film business (pre-dating Hollywood) and, in the 1920s, many insurance companies, set up shop there.

Today, the Navy is a major Jacksonville employer, a trend that started gaining traction during WWII, when Naval Station Mayport and Naval Air Station Jacksonville, both massive military installations, were established.

Other top employers include Amazon, the Mayo Clinic, Johnson & Johnson, and a host of fintech companies. Dun & Bradstreet, FIS, and Nymbus recently decided to locate their headquarters there. And insurance and financial services companies still dominate, giving credence to an old nickname for the city: the Hartford of the South. 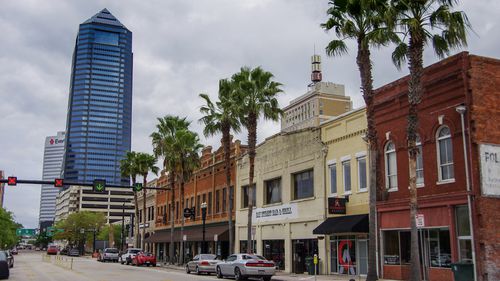 A legacy of music and a passion for art, and food

During the 1920s, the city also became known for La Villa, aka the “Harlem of the South,” thanks to its many live music venues and nightlife scene.

Boosters point to a vibrant cultural scene, and many major, esteemed institutions, from the Cummer Museum of Art & Gardens to the top-ranked Jacksonville Symphony Orchestra, back that up. The city also really loves its ArtWalks (there are three, in different neighborhoods) and art districts, including Riverside Arts Market and the Cork Arts District.

Visitors may notice a lot of public art, especially murals, throughout the city; Sass points to a city ordinance that mandates public art whenever there’s new construction.

Like any good, self-respecting, up-and-coming destination, Jacksonville’s culinary and brewery scene is also on the rise.

From two James Beard–nominated chefs (Brian Whittington at Orsay and Tom Gray at Town Hall and Prati Italia) to the Jax Ale Trail (the city boasts dozens of local breweries) to Southern comfort food to fish camps, the city has a thriving mix of old-school and elegant, driven by locally sourced ingredients that take advantage of the area’s abundance.

This article originally appeared on Mynd.co and was syndicated by MediaFeed.org

The hottest real estate markets in the US right now

About the Author / Ariana Speyer