The Cost of a Haircut in Every Country

Everyone in the world faced the same tough question during endless months of coronavirus lockdown: grow your hair or let your mom cut it? But now, hairdressers are re-opening, and so are bars, theatres and wedding venues. The Salon de Mom literally won’t cut it anymore. It’s time to get a proper haircut.

The problem is that money is tight right now for most of us. And a proper haircut tends to be a payday treat. Can you afford to give a little dignity back to your hairdo?

It depends where you live. NetCredit researched the price of women’s and men’s haircuts in every country around the world, and we found that the disparity between countries and genders is massive. Read on to find the places where getting a haircut is a snip.

Argentina is Home to the World’s Cheapest Haircuts

Scandinavians are famous for their golden locks, and the price of a haircut in this northern European region also glitters. Averaged across genders, four of the top ten most expensive haircuts are in Scandinavia (Denmark, Norway, Sweden and Iceland). Other big economic powers also feature, including the U.K.

At the cheap end of the scale, you’ll find a cut-rate cut in South America, Africa, parts of Asia and eastern Europe. Argentina is the cheapest overall. Nigeria is sixth-cheapest overall, but it would be different if it weren’t for the 634% disparity between women’s and men’s cuts: A trim costs $13.43 for a Nigerian woman but just $1.83 for a man. 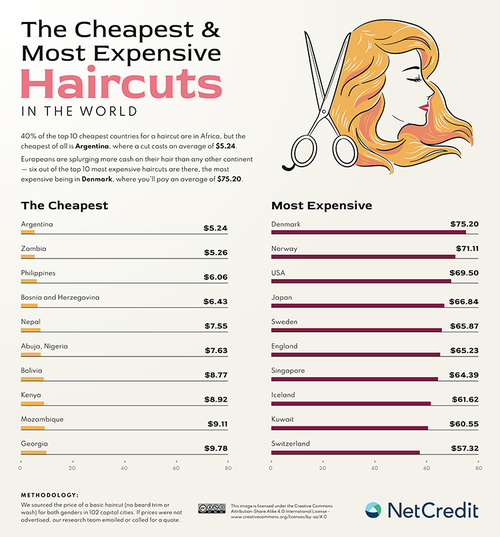 Think Vikings had messy, unkempt hair? Wrong. The steep price of a man’s haircut in Scandinavian countries today reflects a long tradition of Scandi men taking their grooming seriously. A man’s cut in Norway costs $64.50 today, the most expensive men’s cut in the world. Norway also has the narrowest price gap between genders out of the top 20 men’s cuts: A woman’s cut costs ‘just’ 20% more, at $77.72.

We found nine countries where the five-buck cut (or less) is still the norm for men. The cheapest three are African countries (Zambia, Mozambique and Nigeria). In Taiwan, a man’s cut costs $2.23 more than a woman’s – but that price may be worth it. At the height of the pandemic, one Taiwanese mom paid for a “do not dare to go outside” hairdo for her 15-year-old son, a haircut so bad that he wouldn’t dare leave the house to see his friends. 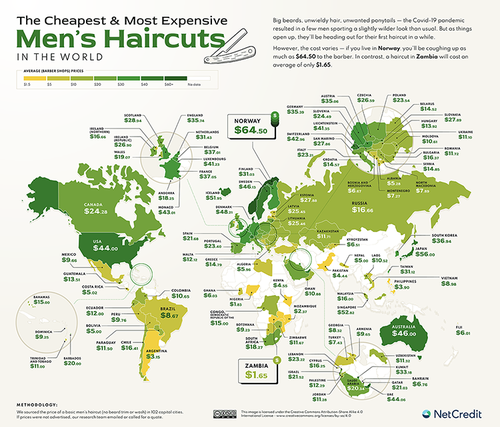 A different Scandi country tops the table for expensive women’s haircuts: Denmark is the only country in the world where a haircut costs more than $100. However, the U.S. and U.K. aren’t far behind at $95.00 and $94.71, respectively. The Danish Board of Equal Treatment ordered individual salons to reduce the gender price disparity in 2013, but courts later ruled that it was OK to have different prices. Today, the average women’s cut in Denmark costs 112% more than the men’s.

Bosnia and Herzegovina may be the fairest place for a woman to get a haircut. Bosnia has the cheapest women’s haircut in the world ($6.20) and a disparity of just 8% – a man’s haircut costs around 47 cents more. Sarajevo, where we took our data, is lined with hairdressers, and the competition keeps prices down. But grooming remains a point of pride for citizens, who even maintained standards during the longest military siege in modern history – to the extent of holding a “Miss Besieged Sarajevo” contest. 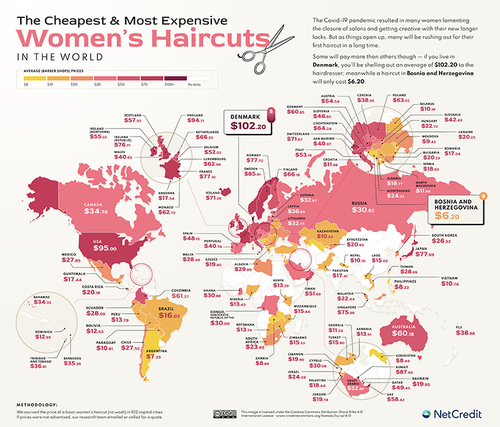 Why (and Where) Does a Woman’s Haircut Cost More?

Men pay more for a cut in just 11 of the 102 countries with available data. The biggest gaps are in Africa and parts of Latin America, although Paraguay has the second-lowest disparity. Fairest of them all is the microstate of Andorra in southwestern Europe. Andorran men pay more than women, as is the case in eight of the 10 fairest countries. 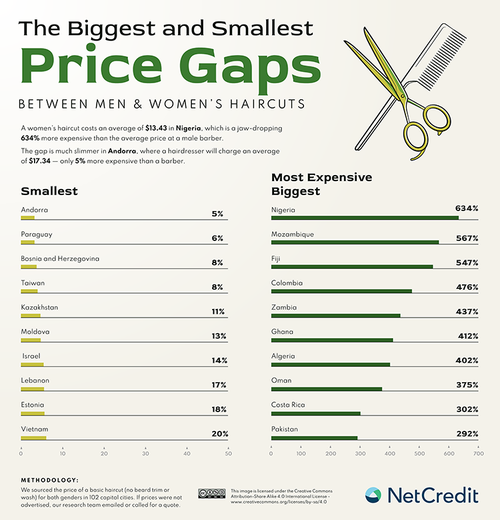 But why does a man’s cut usually cost less?

“[I]t doesn’t take as long to cut their hair, but also they’re in the salon more regularly,” explains celebrity hairdresser Adam Reed. “And there’s less time taken and fewer products used on the finish – for a man, it’s four to five minutes, whereas women’s blow-dries can take a long time.”

Still, others are aiming for parity: “We allow exactly the same amount of time for an appointment whether it’s for a man or a woman,” says Covent Garden hairdresser Neil Moodie. “It has been a slow process, trying to convince men that they should pay the same as women, but this was mainly due to the cheapness of going to a barber back in the day versus going to a women’s hairdressing salon.”

Our prices are averaged, so it’s always possible to find a cheaper cut in your area. If you’re time-rich and money-poor, you can always snag yourself a cheap training session with an apprentice hairdresser. And if you can’t afford to make it back to the salon, why not take inspiration from these unlikely quarantine self-haircut wins? 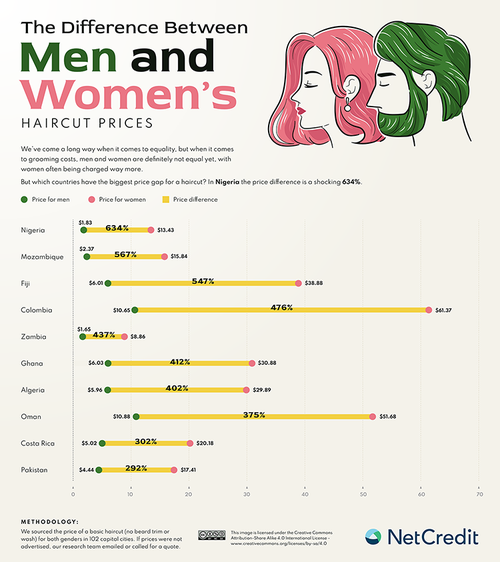 We sourced the price of a basic haircut (no beard trim or wash) for both genders in 102 capital cities. If prices were not advertised on the internet, our research team emailed and called businesses for a quote.

This article
originally appeared on NetCredit.com and was
syndicated by MediaFeed.org.

30 of the best travel destinations in the world

30 of the best travel destinations in the world

Previous Story:
The best & worst states for veterans
Next Story:
20 fun US destinations that won’t blow your budget

About the Author / Barbara Davidson